‘There’s more pressure at the Yu-Gi-Oh! World Championship than a multi-million-dollar poker tournament’ Jake Quinsee has played some high-stakes card games in his time. Nothing comes close to Yu-Gi-Oh!

“There’s so much pressure,” he says, speaking during the Saturday qualifying rounds of 2019’s Yu-Gi-Oh! World Championship, held this year in Berlin, Germany. “It’s so much. I’ve never felt this much pressure in any tournament I’ve ever played, and I’ve played some big tournaments. I even played at the World Series of Poker Main Event, and that’s a $10,000 buy-in. [First prize is typically between $8m and $10m.] I felt no sort of pressure like this in comparison.”

26-year-old Quinsee has been playing Yu-Gi-Oh! for more than a decade, starting at age 14 and stepping up to a pro level with a win at the 2011 UK National Championship. (He took a break with a successful foray into poker about five years ago before “falling back in love” with the trading card game.) He says it’s long been his dream to make Worlds – a competition that has never crowned a winner from the UK.

It was a dream he made happen this year; Quinsee is the only British hopeful in 2019’s World Championship, having guaranteed his debut spot at the invitation-only tournament with a semi-final finish in the European Championships. He “threw everything at” earning an invite to Worlds, playing two tournaments a weekend throughout the game’s competitive season and travelling to major events around Europe to build up the points required for entry to the World Championship Qualifier. The hard-earned place at Worlds came after a near-devastating setback at the UK nationals, where he had made the top eight only to be knocked out in the first round of the playoffs – narrowly missing out on an invite.

“Most of the players here who didn’t do that route probably felt the same as me when qualifying through the European Championship or the continentals. It’s much harder so you don’t really expect it, but if you do it, it’s just crazy.”

This summer marks the World Championship’s return to Europe for the first time since 2014. The tournament is split across three separate formats: the trading card game, the junior Dragon Duel competition for under-13s and the digital Duel Links app, which swaps tables of cards for banks of whirring computers and glowing monitors. Players travel from across the world to compete; this year’s line-up sees players from Panama, Ecuador and the Philippines join those from America, Japan, Australia, across Europe and more.

“I don’t want to make a mistake,” Quinsee says after his second-round win against Australia’s Charles Loo in a mirror match between Salamangreat decks. (It’s the most popular deck build in the competition, with around half the 60 players said to be using variants.) He drew his opening round in the Swiss-format qualifiers, where the eight players with the most points after five rounds proceed to the quarter-finals. “It seems to be going the right way, but there are other players playing different decks to beat the deck I’m playing so it’s kind of like a triangle format.”

Dressed in the same red-and-black jersey that all of the competitors will wear throughout the weekend (the Dragon Duel entrants are dressed in a purple equivalent), Quinsee is visibly tired.

The past two days have involved waking early to meet with officials and run through the tournament’s strict rules; the players submitted their decks, sleeved and secured to eliminate any unfair advantage on either side of the table. They then conducted interviews and photographs for official coverage. On Friday, the players had a day out and meal together.

“First of all, it’s amazing. Absolutely amazing. And the second thing is, it’s absolutely draining,” Quinsee laughs. “Whoever hears this and qualifies in the future, my recommendation is just get as much sleep before the Thursday.” 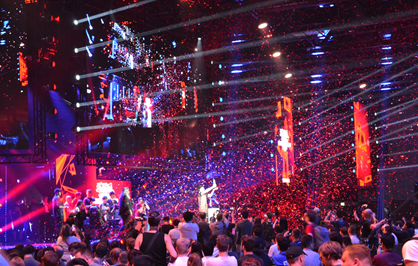 Victory at Worlds can be life-changing; last year’s prize card, created specifically for the winners, was purportedly sold within two hours of the tournament for $20,000. Those who make it into the semi-finals receive a different prize card, while those eliminated before that stage leave with participation items such as exclusive playmats, which can each fetch hundreds of dollars online.

“If I won, I wouldn’t sell the trophy for a million pounds,” Quinsee insists. He’s speaking moments after making it into the quarter-finals, beating Japanese competitor Kouki Kosaka in a “really tough” two-win comeback from an initial first-game loss and ending the Swiss rounds at the top of the points table.

“It could be the tackiest trophy in the world, I just wouldn’t sell it for any price. The prize card maybe, but again it depends. I don’t really know. If I win I’ll probably just keep both because it’s been a big dream of mine for so long, but if it gets to that stage I just won’t sell them, I don’t think. Even if they were worth a Googleplex of a pound, which is just the highest figure ever, I wouldn’t sell it.”

The difficulty of earning a place at Worlds means the event showcases the pinnacle of skill in the Yu-Gi-Oh! scene. Like any high-level competition, it takes commitment – and sacrifice – to get to the top.

“I don’t believe in balance,” Quinsee says of his own determination. “If you really want to be good at something, you’ve got to dedicate a lot more time to it. So I wouldn’t have a healthy balanced lifestyle if I’m honest; you should just literally dedicate your time to something you really want to do well in, and that way you’ll progress and you’ll do really well at it.”

With all the players equally immersed in the game’s meta, it sometimes takes a surprise twist – or a lucky break – to secure victory.

“Everyone’s at a much higher standard,” Quinsee says. “We’re playing against the world’s best so that means that if you build a super consistent deck it all comes down to luck, but if you play power cards then you could actually surprise your opponent. In this tournament, if everyone’s got the same skill level and everyone’s got the same deck, it’s going to come down to luck. So you need a few cards that are going to turn the tables a bit.”

Throughout Saturday morning, the room where Worlds’ matches are held is silent except for the turning of cards and occasional whispered clarification from a judge, summoned by a raised hand at one of the tables.

“When you go to a normal tournament, so whatever size, the tournaments I’m used to have a thousand players, like a YCS [Yu-Gi-Oh! Championship Series] or nationals or European Championships,” Quinsee compares. “You have between 700 to 2,000 players and the room is massive. It’s so filled, so there’s loads of spectators, loads of players. But here the room’s closed off, all the tables are away from one another and it’s so different from what I’m used to. So that puts more pressure on you because you realise, ‘Hang on, I’m here.’”

As the day and rounds progress, the emotion rises in the hushed hall. One of the younger competitors in the Dragon Duel tournament is led away in tears during a later match. Moments later, France’s TCG player Samir Bachar jumps up from his chair with a cry, triumphantly punching the air with both fists.

In the afternoon, as the trading card game’s quarter-finals begin to whittle down the top eight, defeated and victorious players alike are embraced by their fellow competitors.

Less than halfway into Quinsee’s quarter-final game against the USA’s Dakota Angeloff, the match is suddenly brought to a standstill. Minutes pass as the two players quietly await a judge, before Quinsee is led behind a thick curtain at the edge of the hall holding his deck. The other tables continue to play. Angeloff fiddles with his cards and deck box for a number of minutes before Quinsee emerges again, grasping his deck. He sits down, shares a chuckle with his opponent and the duel resumes, two judges now presiding over the action. An official refuses to disclose any information about the situation; Quinsee later reveals he went to replace damaged card sleeves away from the observation of his opponent, a precaution taken as part of regular checks to avoid accusations of cheating – something the player praises as upholding the integrity of the competition.

Half an hour later, it’s all over. Quinsee’s journey at Worlds 2019 is brought to an end in the quarter-finals by combination of Angeloff’s skill and a die roll – used to decide who goes first – that puts the British hopeful on the backfoot.

“I lost the dice roll and he opened a good board,” Quinsee says moments after his elimination. “I could’ve come back if I drew a certain few cards, but I didn’t draw them. And then game two I just drew really poor, but I nearly came back, and then just lost. So unfortunately, yeah, I’m out.”

The following day, after a tense series of semi-finals and the finals for the Dragon Duel and Duel Links tournaments, Taiwan’s Chia Ching Wang and Japan’s Kouki Kosaka take to the main stage to battle in the TCG final. Kosaka ultimately lifts the trophy, winning 2-0 against the former world champion. As the confetti drifts down, the victor is joined on stage by all 60 of the World Championship competitors, Quinsee among the players applauded and cheered by around 3,000 fans in the buzzing arena.

Even with his own road at 2019’s Worlds cut short, Quinsee reflects positively on the experience. His decade-long dream fulfilled, he says that he likely won’t compete in the gruelling race to qualify on points next season, but hopes to repeat his success at the European Championships to earn an invitation.

“It’s always been a dream of mine to go to Worlds, so I thought, ‘You know what? I’m gonna try this year.’ Then here I am.”