Margerita is gasping for breath, struggling feebly against the wall as the stranger brings the knife down, brutally disembowelling her. For her, death is swift, but for Agents Taylor and DiMarco, who are standing in the room as it happens, the nightmares will continue for a while.

Both characters lose 1D6 sanity for witnessing the murder, followed by a further two just for trying to comprehend the grey-skinned creatures, each one nearly seven feet of solid muscle and armed with a knife spanning nearly half that length.

At the end of the adventure they'll lose more sanity and deal with the long-term stress, the therapy. For now, Taylor starts sobbing loudly, running from the room terrified.

Margerita knew this was going to happen, getting a premonition after her player Adam rolled a critical success – in this case a 33, with criticals successes and failures occurring on doubles – on an occult roll and learning more than she wanted. She became convinced these creatures were the living embodiment of death, screaming at the rest of the team about how they wouldn't survive the night.

She was half-right. After she gets carved up, an interaction with a grotesquely altered child leads to the death of Taylor, the kid unleashing a telekinetic wave of force that turns his flesh and bone to confetti, painting the inside of the car and tearing it apart moments before the sun rises, those first rays of daylight bringing an end to the awful siege that led to countless deaths at a ranger station in Yosemite Park.

For the agents of Delta Green though, it's just another day in the office. For those playing it, the tabletop RPG offers one of the most compelling horror experiences you can have with a set of dice.

It's the most brutal roleplaying game I've ever played, with death – or something worse – often occurring with little warning. Since the game's successful rebirth late last year, I’ve been hosting the game for an eager group who were looking for something different from the standard RPG, and found it here.

I've been running it near-continuously for my players since the successful Kickstarter campaign. Or, more accurately, I haven't been able to stop running it for my players, who constantly pester me about the next session or working out their newest character. We have a lot of new characters; most sessions see an agent – Delta Green's player characters – horrifically killed.

Death is core to the whole inception of Delta Green. Dennis Detwiller, one of the those responsible for both the original game and this latest reimagining, tells me that Delta Green was born as a new setting for the Call of Cthulhu roleplaying game in response to how many player characters were being bumped off.

"It was [created] to combat the high mortality rate standard in any Lovecraftian adventure,” he explains, "In Masks of Nyarlathotep, we'd reached a point where we were recruiting waiters to fight the Cult of the Bloody Tongue because so many characters had died."

"We were retreating to the nearest cafe or bar and the first person we'd meet we'd be like, 'Hey, you want to come and fight the forces of evil? Let's go!’”

Delta Green's form is less that of a band of plucky paranormal investigators, becoming more of an organised form of resistance with government training.

"The federal government had tangled with fish-men in 1928. Didn't it make sense they might know what's going on, on some level?"

If this reminds you of The X-Files, you're halfway there, except that Delta Green's first supplement preceded Fox's stellar TV show by nearly a year and the tone here is pitch black. This is the version of The X-Files if Mulder was bisected by a razor-sharp tentacle in episode two while Scully watched, causing her to go back to the FBI headquarters and murder everyone there to try and quiet the voices inside her head, finally finding salvation by putting the pistol to her own head and pulling the trigger. 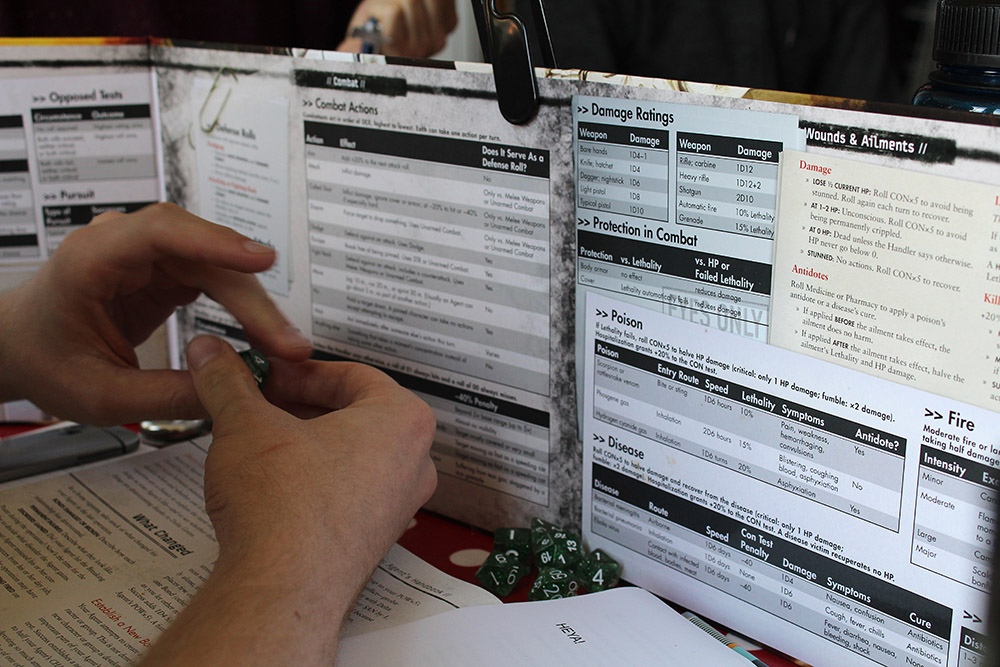 In the original game's lore, those working for Delta Green when the project was disavowed and shut down after a disaster realised their work was more important, and kept the project going under the radar.

Now, after a successful Kickstarter, a version of the game updated for our times is just around the corner. You can play it now; the Agent's Handbook, GM screen and quick-start pack are already out, with the complete edition expected to emerge very soon.

"This belief, and it seems ridiculously naive to us today," observes Detwiller, "was that the government is lying to us, and that's what tied Delta Green together.

"Updating it, now we're talking about a post-truth society – sure there's YouTube, but if you upload a video of the Deep Ones, the first comment is ‘Photoshop!’ and the second is speculation that it's viral marketing for the new Cloverfield movie. The world protects itself from things it doesn't want to know."

Inside this new post-truth world is Delta Green. The agents have the skills, equipment and training to save the day against the numerous eldritch horrors threatening to destroy life as we know it – or, at least, they think they do. In practice, they're often outmatched, trying to fight off the darkness with a flickering flashlight.

“The central core of the game is failure, and this makes brief victories, shining moments, much brighter to the players.”

The realisation of quite how screwed you are in any given situation is a big part of the Delta Green experience as you try to mitigate risks and live to fight another day. Delta Green agents rarely retire and even the occasional against-all-odds success leaves physical and mental scars on everyone present. Missions are undertaken with a grim determination and the ever-present knowledge that most of the abominations that agents are fighting are too powerful to truly comprehend.

"Delta Green's most unique aspect is this unflinching expectation of failure,” Detwiller suggests. "The smartest and best agents in Delta Green know that they can never win, but they still fight. The central core of the game is failure, and this makes brief victories, shining moments, much brighter to the players. Other games heap success and victories on the players until they become jaded. After a while, they end up with an 'OK, so what next?' attitude."

All of the game's mechanics play into this in one way or another. The sanity system functions as a sort of mental health pool, with attacks on the mind from horror, unknowable foes and even receiving or perpetrating violence all draining an agent.

The game itself works by having agents aim to roll below a set number shown by their skills: want to shoot someone? You need to roll a D100 and get it below your firearm skill.

If you want to resist an assault on your sanity however, you'll need to roll below your current sanity and failure — and indeed some successes — depleting your pool.

It's an elegant way to show a crumbling mind, and mental breaks along the way will riddle agents with mental ailments such as depression, megalomania or a totemic compulsion for an item that they believe is key to their continued survival.

If that all sounds too much, the bond system allows agents to resist sanity attacks by projecting onto a key relationship in their lives. This could be their wife, kids or even their loyal dog, but it's a relationship that's crucial to the agents’ lives. A relationship that you can slowly sacrifice to try to hold onto some sanity. In gameplay, this means you can use the memory of your kids to pull you through watching a teammate get pulled apart by ugly tentacles, only now you'll always associate that with them, and you'll become distant, withdrawn.

As your agents fall, they'll become shells of their former selves, which can be an oppressive atmosphere to play in, but it's great both for anecdotes and creating an environment for telling exciting stories – even if the good guys don't necessarily save the day. 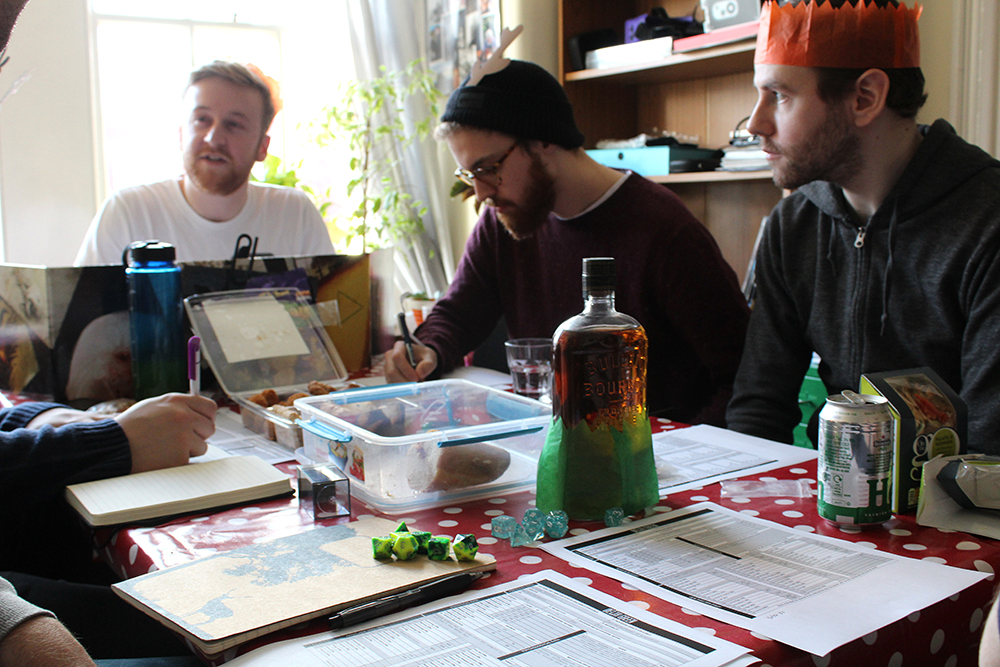 For Detwiller, and those that play it, Delta Green is a tale of survival. It's a game about who will last, how long they can survive the dangers thrown at them and the slow creeping realisation that no-one lasts forever.

This repeated thematic reminder of player characters' mortality, coupled with Delta Green's nigh-obsessive focus on the granular details of life in the field for a government agency, or indeed a secret conspiracy trying to cover its tracks, creates the game's most memorable moments. Detwiller tells me, laughing, about his favourite Delta Green story. It starts with a body, which isn't that unusual for Delta Green.

"I was running a game where Scott Glancy — one of the original Delta Green co-designers — had to dispose of the body of a compatriot who had been killed and, in classic Delta Green fashion, I made him step through everything he would do with the body," he recounts. "This involved hacksaws, puncturing the chest cavity, tarp, wading into freezing water and just plain losing a ton of sanity.

"Later, Glancy's same character encounters this giant, unnatural, horrible, loping beast the size of an elephant. This beast's mandate, because it's intelligent, was to keep people off the mountain. So, after it had killed the rest of Glancy's team, it pinned Glancy's agent to the ground and pissed all over him; basically saying: ‘Go, don't come back.’"

These moments of horror, triumph over impossible odds and the story of each player's eventual destruction are the real reason to play Delta Green. It's a roleplaying game with powerful themes and a consistent world backed up with mechanics that aren't just solid, but actually smartly reinforce the themes. It's sublime.