Ten of the Best: Cat Games A purrrrrfect helping of cat based games

Cats. They may knock everything off of the shelves with some delight, try to con you into extra food helpings, and bring all sorts of creatures into the house as a gift, but they’re human-kinds other best friend, and so here’s ten of the best cat games. We can’t promise that these games won’t be swiped off the table, but they might gain more feline favour than most. 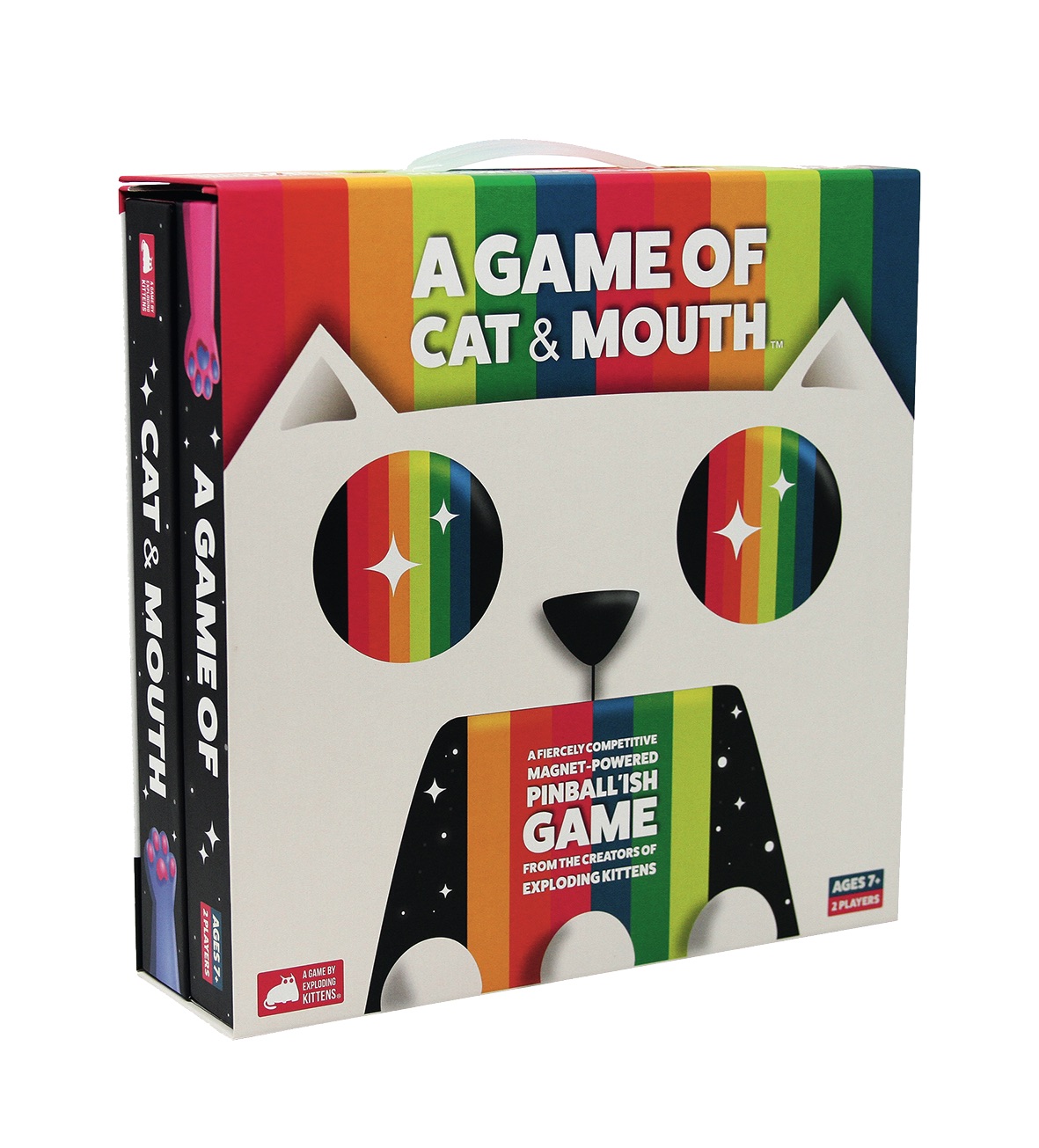 A Game of Cat and Mouth is a bonkers-in-the-best-way kind of game, which in fact is a great description for most Exploding Kittens games. It can’t even be described simply, as it’s a mixture of pinball, air hockey, and those basketball games you get at the arcades. Housed in a magnetic briefcase like case that becomes the board, you’ll use a magnetically attached paw to fire balls through the mouth or nose of a plastic cat in the centre, winning your turn if you knock the nose out or fire the teeth or balls onto your opponent’s side. Sure, it’s simple to play, and one that the whole family can get behind in tournament mode, but it’s not one to underestimate, as this cute game brings out the competitive side of everyone.

Buy a copy of Cat & Mouth by clicking here, and watch our Cat & Mouth Office Tournament here too! 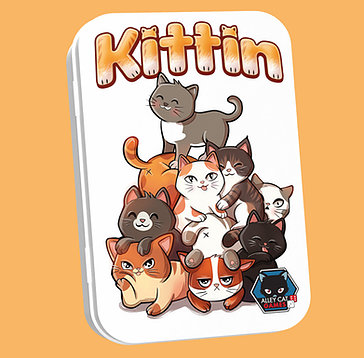 Kittin from Alleycat Games is one of those pocket games (should you have pockets to begin with) that offers way more than its size suggests. This tiny tin contains a wealth of somehow adorable cat meeples, and the game challenges you to create the structures dictated on the card to build a fantastical cat tower, that has to stay standing by the end. It may not be that ‘fat cat’ Eurogame that has you sucked in for hours, but there’s something delightful in stacking tiny kittens.
A purr-fect for grown up cool cats and younger kittens alike.

Buy a copy of Kittin by clicking here 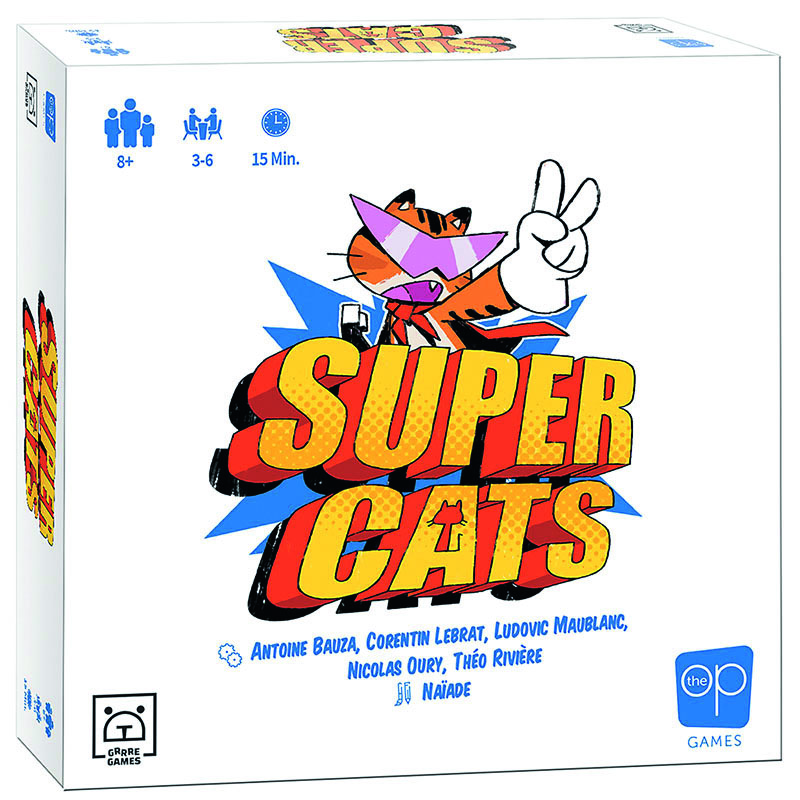 Why have normal fluffy cats when you can have crime fighting SUPER-CATS? This is one from The Op, where you’re playing as a group of cats endeavouring to become heroes. No hero would be possible without an arch nemesis, and this one is RoboDog, the eater of cat food that clearly isn’t his. You play in two rounds, all at the same time as each other, raising fingers to try to not match your opponents – highest unmatched gets to turn one of their cuddly little kitten cards into an epic superhero. Then it’s time to fight RoboDog. The game really draws for both a fun family game for everyone to enjoy, plus the delightful artwork. The cats are drawn incredibly well, and their transformations equally impressive to see. It’s a lovely one both to play and to look at. 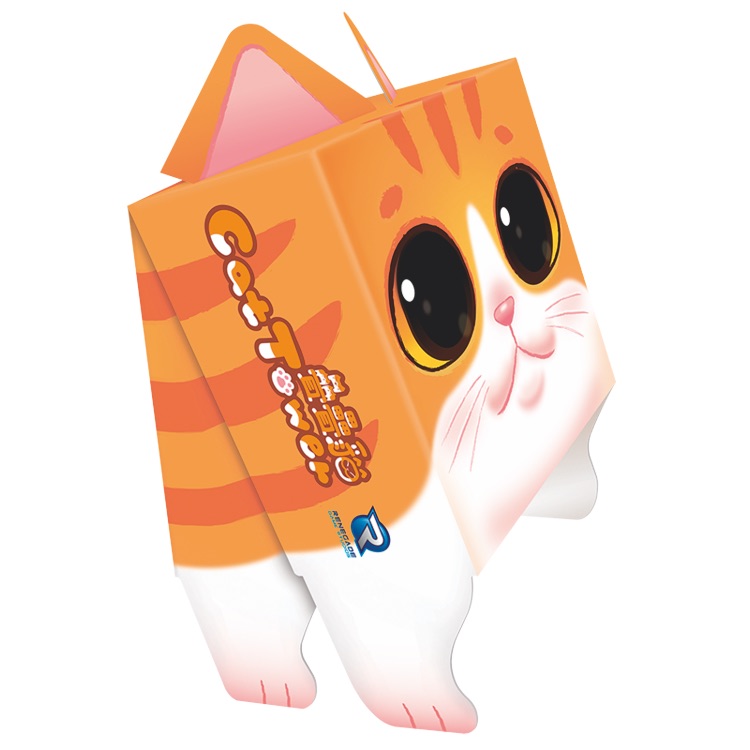 If this game were a cat, it would be a Bengal, because it’s all about the heights. Within it, you’ll be building a cat tower. No, really, I appreciate it’s surprising given the title, but that’s what it is. It may be worth letting you know that the cats are made of card, and the stacking of them is because they’re too lazy to jump for a cat treat and so supposed the feline version of Jenga was a better option. Add in some cards that will mix things up by changing the order of turn, the orientation of the stacking cat and more, and you’ve got yourself a busy afternoon of cat related competition. 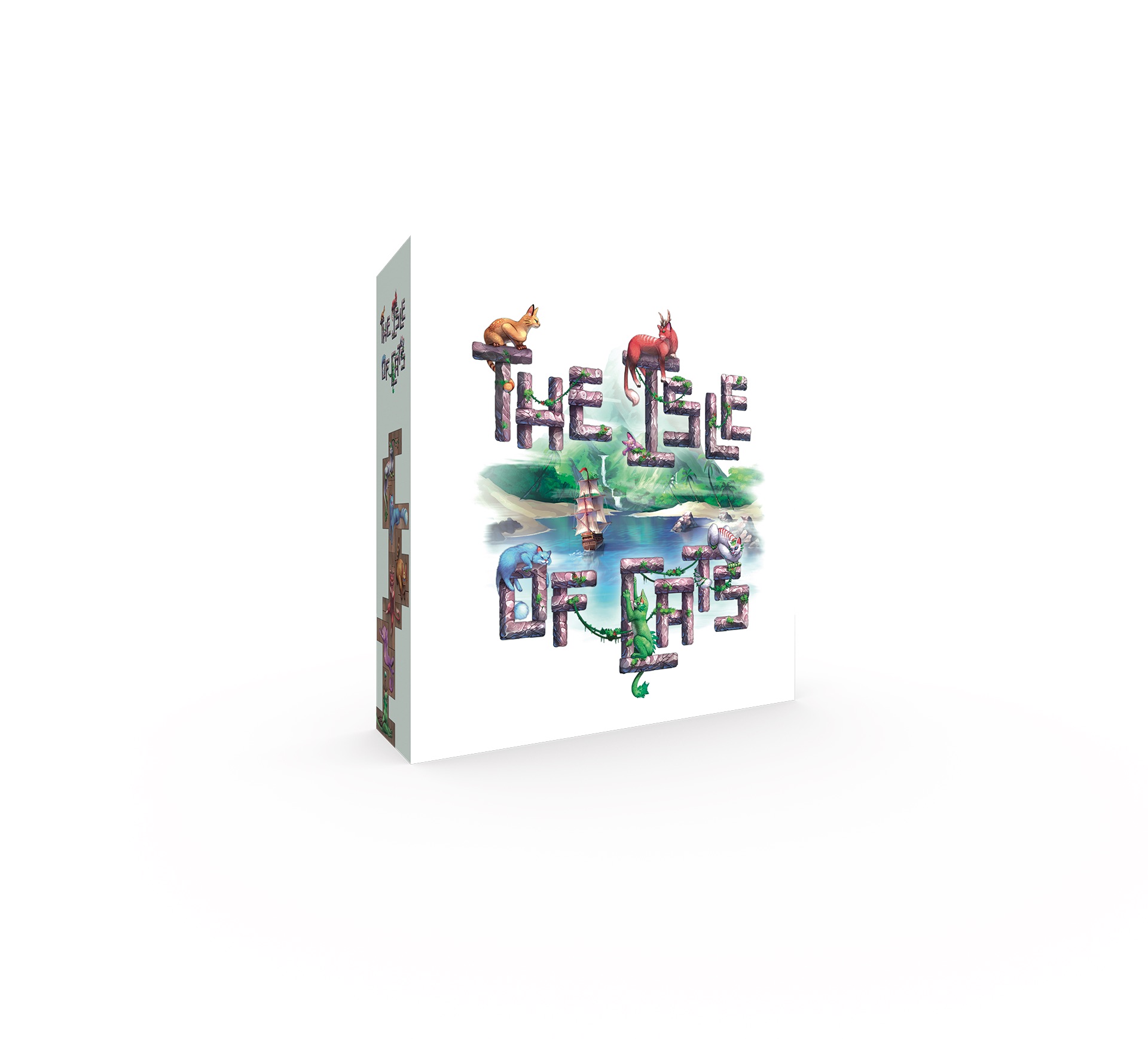 There have been legends, but no one believed they were true. Ancient, wise, fierce and playful cats, just beyond the reaches of Squall’s End where you reside. When they turn out to be true, it becomes a race against time because the armies of Vesh Darkhand are approaching to destroy the islands. These noble creatures need saving, and that’s where you come in, finding cats and taking placing them into the ship, trying to keep them together, and gain as many points as you can. It’s as easy as herding cats.

Buy a copy of Isle of Cats here 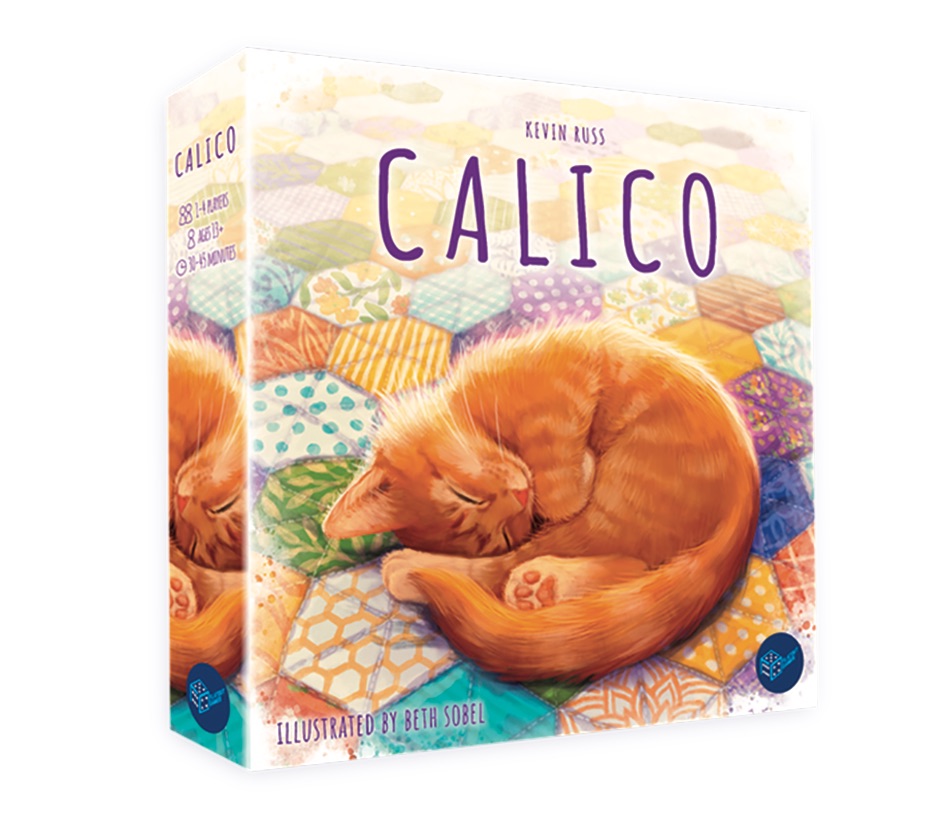 The cover is as endearing as the game, as the cosy looking cat snoozing on the quilt represents exactly what you’ll want to do, in sewing the cosiest quilt to attract the cuddly cat. You’ll have quilt boards and patch tiles and kittens, and putting the right combination of tiles onto the board awards you cats. It’s a fun little game, letting you emulate that feeling of owning a cat and looking at them sleeping so peacefully (before charging around the house like a bull in a china shop upon waking). 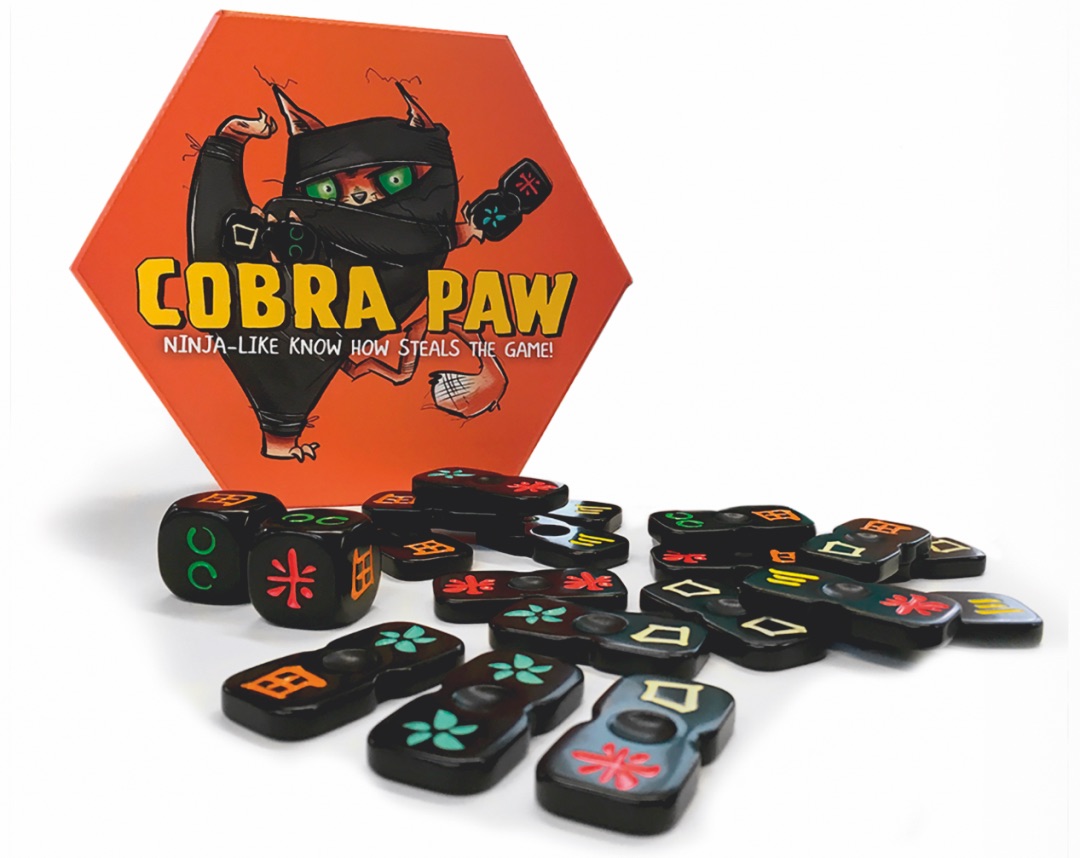 If you’ve ever seen a cat swatting something breakable (because it’s always something breakable) and been impressed by the lightning-fast method of doing so – and also that look that tells you it was absolutely deliberate – you may want to learn some ninja moves of your own. Enter Cobra Paw. Containing tokens of varying symbol combinations that are somewhat reminiscent of dominos, when you roll the dice, you’ll seek to be the first to grab the tile with the same symbol. You just need to be faster than your opponents, so channel your inner ninja cat. 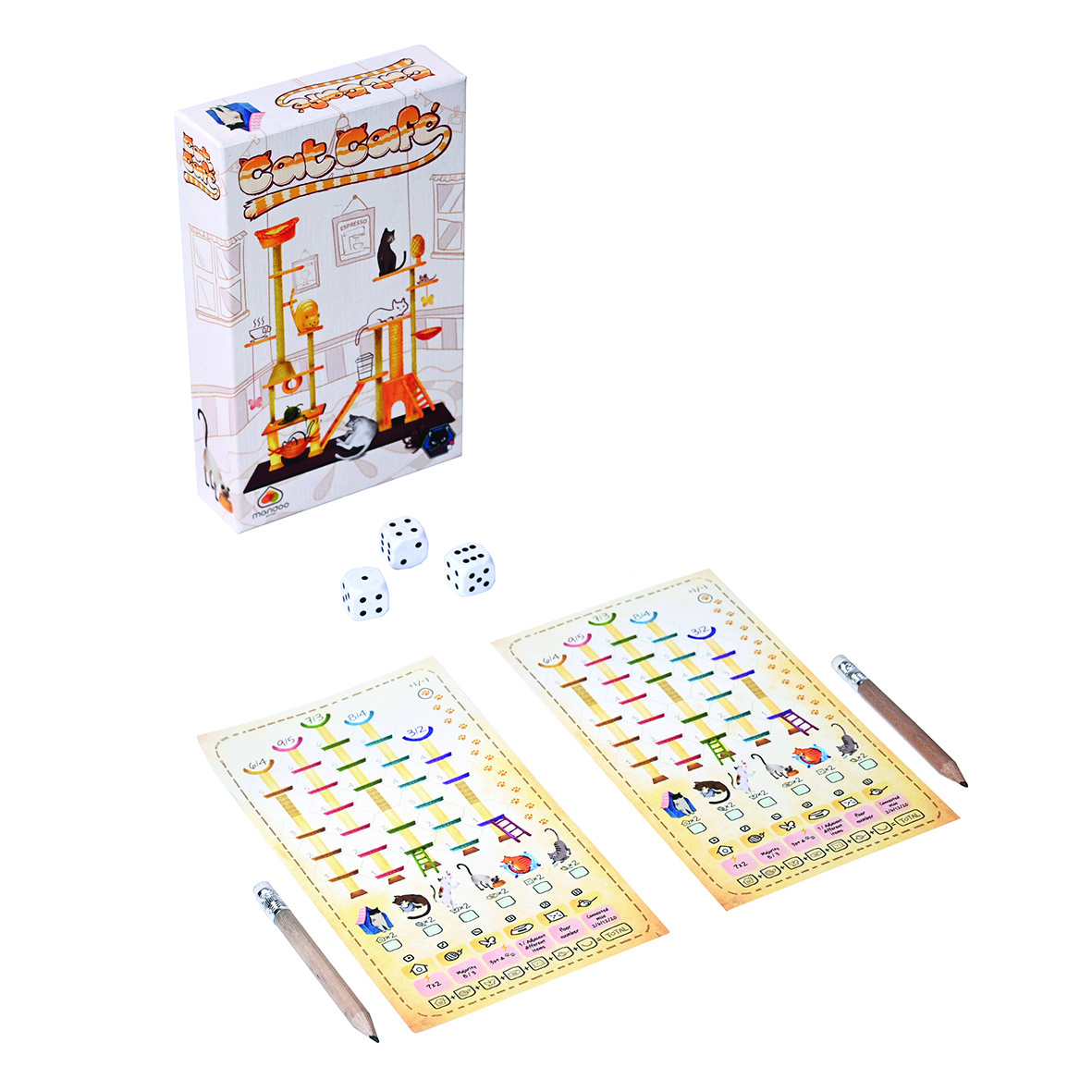 If you go to a cat café, you want to see cats. One at minimum, the whole café worth of cats being the actual goal. How are you going to achieve this? Well, you’re going to need cat toys, lots of them, well placed, to lure them to your side. That’s how Cat Café tells us to approach the issue that is, with this roll and write. This is the snoozing cat of cat games, something just delightful in itself, but a slight chance of claws depending on how competitive you are.

Pick up a copy of Cat Cafe by clicking here 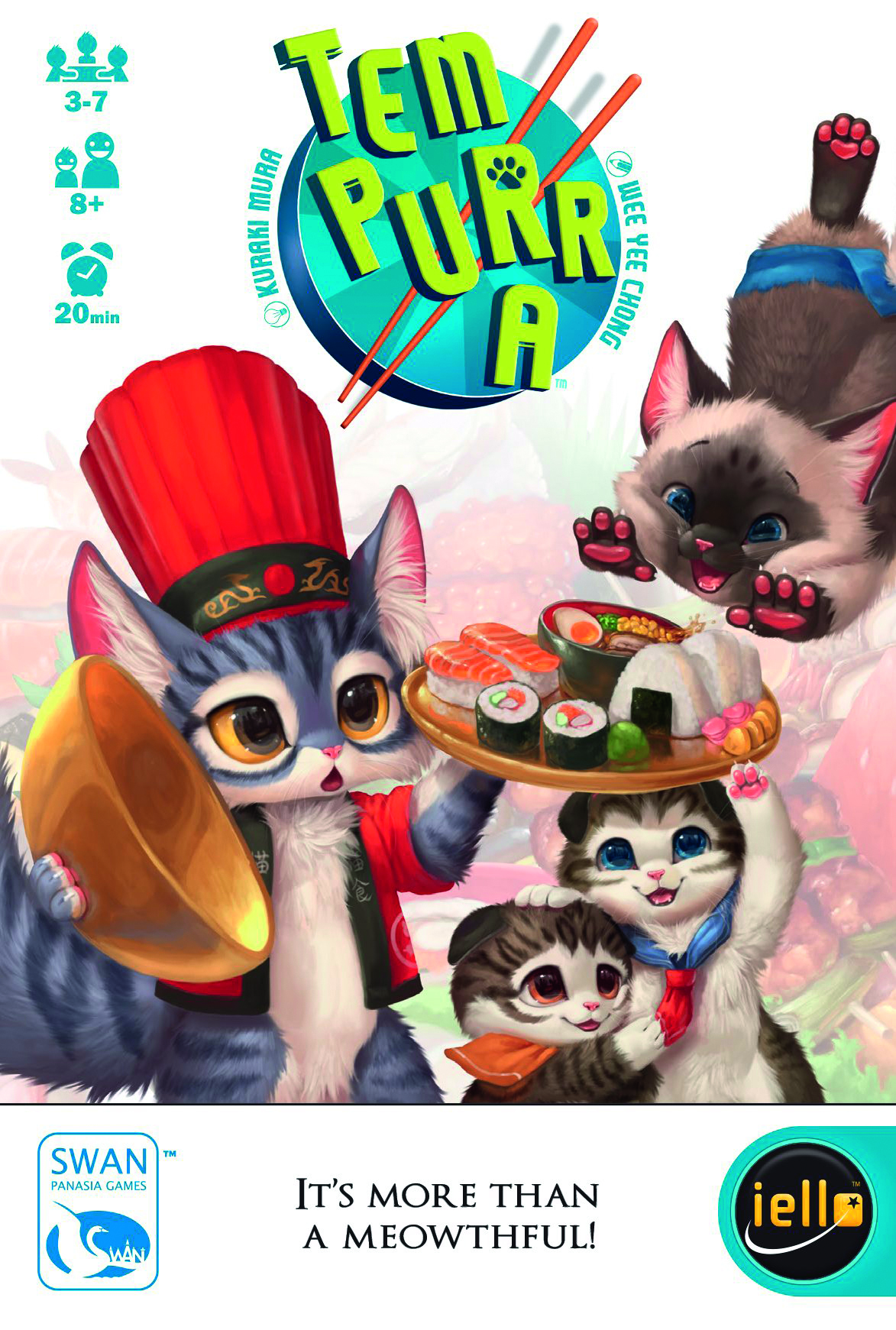 We’ve seen them. Meowing to give them food, even though they’ve already been fed. Giving you that look to say that they haven’t, causing you to doubt yourself even though you’re sure you did…That makes a buffet a cat’s dream, and cats therefore the perfect characters for an eating competition as featured in Tem-Purr-A. It’s not just about eating your own food, but about pushing dishes onto your fellow players, and trying to avoid the indigestion cards. Avoid becoming cat-atonic with food, or you’ve lost the game.

Pick up your copy of Tem-Purr-A here 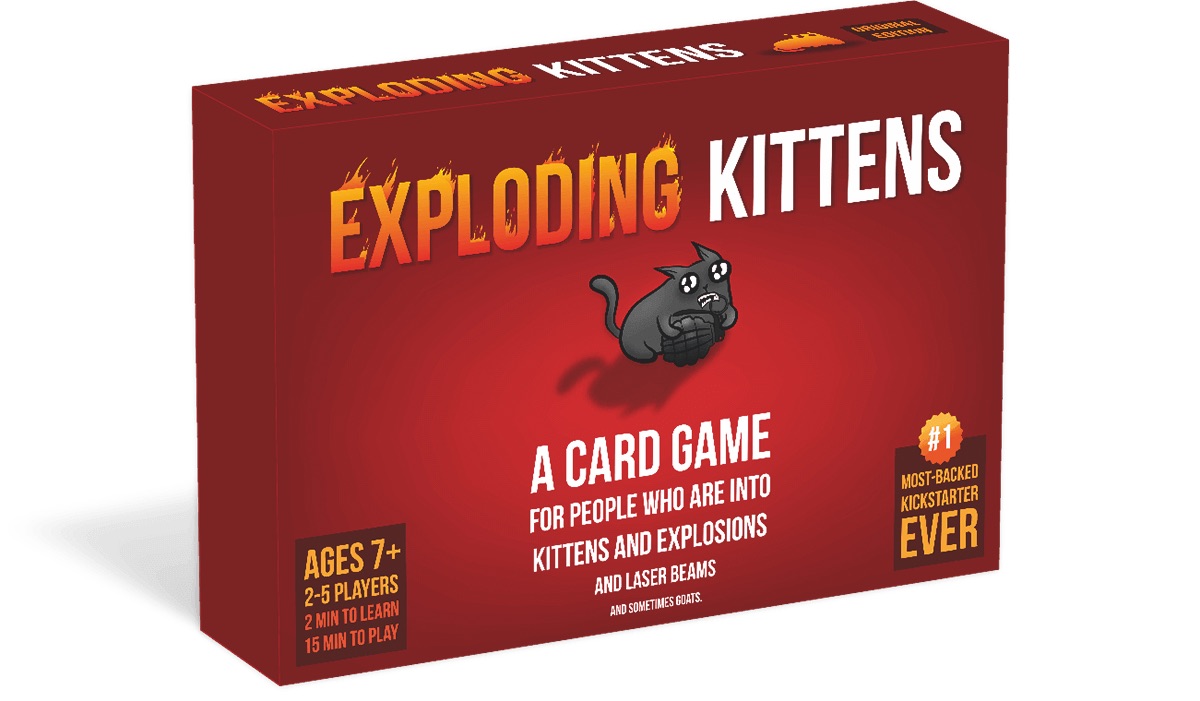 It may be the original, but there’s a reason you think of this game when we mention cat games. Once a record breaking Kickstarter, this bonkers little card game packs a punch despite its tiny packaging. With artwork from the Oatmeal, you’ll find each card contains a little humour, leaving you smiling at your hand of cards before you even begin. Then, it's dog eat dog (cat eat cat?). Diffuse the bomb and you’re safe (for now!) but you’ll need to make sure you have another diffuse card to hand, or can pass off the bomb onto your other players. And if you think that won’t happen, you’re going to enjoy slamming down a NOPE card at the perfect opportunity when your fellow player thinks they got away with it, and that really is a joyful experience.

This article was featured in issue 50 of Tabletop Gaming. Pick up the latest issue of the UK's fastest-growing gaming magazine in print or digital here – or subscribe to make sure you never miss another issue.