We check out the archives for this (nut)cracker

Arthur Harman presents the battle in The Nutcracker between the Toy Soldiers and the Kitchen Mice, inspired by the works of ETA Hoffman, Bob Cordery and late, great American wargamer Joseph Morschauser.

When my daughter started ballet lessons, she naturally developed an interest in the stories of the classic ballets, and I read her many a bedtime story version of them from illustrated children’s books. The Nutcracker was my favourite, of course, because of the prominent role played by the Toy Soldiers who defended Clara from being abducted by the Kitchen Mice, and I was inspired to create a scenario and rules for a simple game of toy soldiers that she might enjoy.

Alas, Charlotte proved to be a member of the ‘awkward squad’ in her ballet class, made little progress and soon abandoned the barre for much greater success with the violin and saxophone, so my cunning plan to make a wargamer of her was thwarted! I therefore offer this game in the hope it may entertain readers and their families – perhaps after watching a performance of The Nutcracker?

The battlefield is a flat surface, divided into squares to control movement and toy cannon-fire, representing the floor of the salon of Clara’s home. Each square should be able to hold at least four figures or three Toy Soldiers and their toy cannon. On one side of the gameboard is a large pot, in which a Christmas tree (not necessarily portrayed) is planted, and around which are assorted, randomly placed, garishly wrapped small boxes to portray the Schonbaum family’s Christmas presents, including a big rectangular box containing the Toy Soldiers and their toy cannon. On the opposite side of the board is marked the important opening of the door to the Kitchen, through which the Kitchen Mice must enter.

Players may choose from the following options:

2.    IGO-UGO but dicing to see which side goes first each time.

3.    Create five cards, labelled Clara, The Prince, Toy Soldiers, The Mouse King and Kitchen Mice, and shuffle them before each game turn. Draw a card to discover who goes next; the character(s) named thereon performs all permitted actions before another card is drawn.

4.    A rigid turn sequence in which the permitted actions for each side or character must be performed in the order below:

i.    Clara, the Prince and the Mouse King move.

ii.    Clara and the Prince may help any Toy Soldiers knocked down last turn regain their feet; the Mouse King kicks and curses any Kitchen Mice stunned last turn back into action, or rallies any fleeing Kitchen Mice.

iii.    The Prince and the Mouse King give orders.

v.    The toy cannon shoots; the effects of its fire are resolved immediately.

vi.    Close combat between the Prince and the Mouse King, and between the Toy Soldiers and the Kitchen Mice; the results of combat are applied immediately.

•    Clara, the Prince and the Mouse King may move up to two squares, orthogonally or diagonally.

•    Toy Soldiers and Kitchen Mice may only move one square, orthogonally or diagonally.

•    Three Toy Soldiers are required to move the cannon one square in one turn; or they may load, aim – by turning the cannon up to ninety degrees – and fire in one turn.

•    Should two or more of the Kitchen Mice, or the Mouse King himself, be defeated, Clara will break free and run back towards the Prince at two squares per turn.

•    The toy cannon shoots projectiles consisting of small pieces of hard cheese, represented by pieces of yellow modelling clay. Three Toy Soldiers must be in the same square to work the cannon, which can be loaded, aimed and fired – but not moved out of its square - in the same turn.

•    To determine the effect of shooting the toy cannon, I suggest borrowing the artillery system from Bob Cordery’s Portable Wargame, by throwing two dice: the score of the first die determines where the shot lands, as shown in the explanatory diagram; the score of the second, divided by two and the answer rounded down, is the number of Kitchen Mice in that square that are knocked over. The Mouse King, however, can never be knocked down by cheese projectiles shot from the toy cannon, nor will he be distracted by them.

•    A Kitchen Mouse hit by a piece of cheese will be knocked down and stunned until either the Mouse King rouses it by kicks and curses, or two other Kitchen Mice drag it back to the safety of the Kitchen door, where it will be revived.

•    Any Kitchen Mice in a square adjacent to that where a cheese projectile lands will stop and spend a number of turns equal to the score on a normal die divided by the number of Kitchen Mice in the square (rounded up) to devour it, or until the Mouse King enters the same square and drives them back to the attack the next turn. 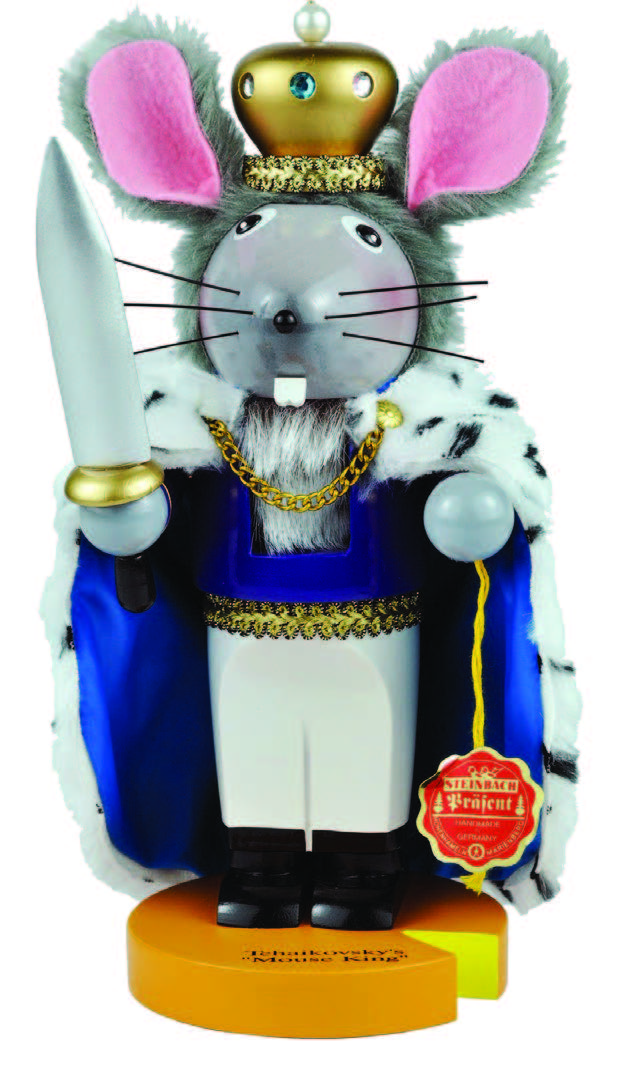 •    The Prince, the Toy Soldiers and the Kitchen Mice engage in close combat when they enter either the same, or orthogonally adjacent, squares.

•     The Mouse King considers it beneath his dignity to engage in paw to hand combat with anyone other than the Prince! If they engage each other, the combat is resolved by playing three rounds of Cut, Parry, Thrust – the traditional Rock, Paper, Scissors game, but with the words changed for greater period atmosphere – in which a THRUST defeats a CUT, which defeats a PARRY, which blocks a THRUST.

•    Should the Mouse King be defeated, all the Kitchen Mice panic and flee to the Kitchen and the battle is over; should the Prince lose, he falls to the floor, stunned, at the Mouse King’s mercy and will surely die – unless some Toy Soldiers who are unengaged in the same or an adjacent square can advance and drive the Mouse King off, or Clara can throw her shoe, provided she is not more than two squares away, and stun the Mouse King by throwing 6 on a normal die.

•    Combat between the Prince and the Toy Soldiers and the Kitchen Mice may be resolved by playing Cut, Parry, Thrust as described above; the loser falling over if a Toy Soldier, or fleeing back to the Kitchen door before returning to the fray if a Kitchen Mouse.

•    Alternatively, if one wishes to introduce young children to wargame systems, one could throw a normal die for each combatant:

•    A Kitchen Mouse that is defeated in close combat will either be stunned as if by toy cannon fire (see above) if the die shows 4 or will panic and flee towards the Kitchen if the die score is 3, 2 or 1. The Mouse King can try to rally all the fleeing Kitchen Mice in the same square that he enters, provided he is not engaged in close combat at the same time, by throwing a die; the score, halved and rounded up, is the number of Kitchen Mice he has rallied and may order forward again the following turn.

The malevolent Mouse King and his Kitchen Mice minions win if they capture Clara and carry her off to their lair – there to suffer every torment the villainous vermin can devise in revenge for all the cats, traps and poison Humanity has inflicted upon Mousekind through the centuries – through the Kitchen door.

The game may be staged using figures of whatever size the players can muster. Clara may be portrayed by a female figure in early nineteenth century costume, or one in a simple, plain long dress that can be painted to resemble a nightgown. The Prince, his detachment of Toy Soldiers and their cannon may be represented by a suitably dashing Napoleonic infantry officer and troops of any nationality, but Eureka Miniatures do produce a wonderful range of 28mm Toy Town Soldiers that would be absolutely perfect for a game in that scale. Eureka also produce a range of 28mm Warrior Mice, which includes a chieftain and mice with swords and spears; alternatively, one could use appropriate models from Games Workshop’s Skaven range, or the ratmen produced by other manufacturers in a variety of scales. A small plastic flowerpot will suffice for the pot of the Christmas tree, or one could use one of the small artificial trees that appear in shops during the festive season or any good representation of a fir tree. Small boxes, such as matchboxes, stock cube boxes and so on, covered in offcuts of Christmas wrapping paper can represent the family’s presents; a large toothpaste carton will make a good box for the Toy Soldiers. The rules have been adapted, with his kind permission, from those for Bob Cordery’s Portable Wargame (mentioned by Conrad Kinch in MWBG issue 385 – see here).

This article originally appeared in issue 386 of Miniature Wargames. You can pick up your issue of the magazine here or subscribe to make sure you never miss another issue.