From the independent shelf, to chatting to Nate Hayden himself

Words and interview by Charlie Theel

Rocky Mountain Man is a peculiar game, a solitaire experience arriving at the height of the global pandemic. It’s a magazine game with a paper map and sheets of cards you have to cut out yourself. This is nothing new for designer Nate Hayden who, for several years, has released annual horror folio designs under his publishing imprint Emperors of Eternal Evil. Rocky Mountain Man isn’t a horror game, however, it’s a revelatory and introspective experience of exploration and discovery.

The first thing to note is how primal this feels. You make your way across a map depicting parts of Colorado and Nevada in the United States during the early 1800s. You’re leading an expedition of men armed with rifles, hunting gear, horses, and some food. But it’s not enough. You will need to hunt and scavenge, acquiring vittles as well as hopefully a bevy of furs to take back East and profit from at the conclusion of play.

It’s all about exploration. This is the main mechanism of play. You choose an adjacent hex to move into and then interact with the central deck of cards that you spent a chunk of time slicing apart earlier. The drawn card will tell you what type of terrain you find. It could be plains, a forest, the continuation of a river, or even a towering mountain. This is marked on the map with a crayon of all things. It’s wild and feels like you’re marking up a little personal map of the countryside with the most archaic of tools. It’s also joyful in a very simple and basic sort of way.

This system of moving across a bare-bones hex map while drawing upon it with crayon is heavily inspired by the 1978 Avalon Hill design Source of the Nile. Much of this game’s DNA is owed to that release.

Where this game diverges though is most interesting. For instance, the weather is a primary foe in Rocky Mountain Man. This is of lesser concern if you’re playing the shorter single year expedition, but for the full campaign mode of play you will endure the wild over multiple years. This format allows you to explore the decision space of erecting cabins and even establishing a trading outpost. If you don’t construct a domicile you risk freezing to death. It’s brutal.

The campaign mode feels more grand and fully realised as it integrates well with the mechanisms. It’s the preferred way to play if you have the time, a cost which is admittedly high. You will want to leave the game setup, as the multi-year setup requires many hours of play if you manage to hang on and survive throughout the hardships.

And the adversity is severe. You will encounter wild animals, able to relive the best scenes of The Revenant, the exceptional film detailing Hugh Glass’ treacherous expedition. You will encounter native peoples, captured wonderfully with a sense of mystique and reverence. The game is a sandbox at heart, allowing you to either seek peace and trade, or succumb to your worst urges and inflict violence and pain.

There is also much beauty. You will discover strange rock formations and breathtaking waterfalls. You will see your people perish and you will see them triumph over nature. It’s a very quiet game, one of introspection and reflection. It’s the type of game that I sit quietly thinking about, days after playing. It’s Rocky Mountain Man.

When did you first come up with the idea for Rocky Mountain Man?

I came up with Rocky Mountain Man due to the initial lockdowns in 2020. I had heard that there was going to be a second lockdown in the Summer of 2020, so I thought I’d take time off and hike the Colorado Trail. The Colorado Trail can take about four to six weeks to complete, and I just wanted to get out of town, but there was enough work to do that I couldn’t break away, so I rather contemplated the history of the Colorado mountains which lead to the game.

With it being based on Source of the Nile, what design issues did you encounter?

I had to jump into the Source of the Nile mechanics and understand why they used what they did. That is a multiplayer game, but that it works based on a timer really seemed the key to that experience. The timer seems odd, but there is something within the motion of the actions that makes that timer mechanic work. In other ways I had to change a couple of things so they were still Source of the Nile mechanics, but worked for Colorado. The River card checks was changed a bit. Source of the Nile also creates the environment a bit too randomly, and I had to have the three most basic terrain areas, otherwise Colorado wouldn’t look like Colorado if Desert could be next to Mountain.

How did the pandemic influence the design and its publication?

There would be no Rocky Mountain Man if there wasn’t a pandemic. It was a subject that I don’t think would have revealed itself as something to do if the pandemic had not occurred. I pined for a solitaire, almost RPG experience because I knew many game groups were certainly not happening in 2020. The entire game is the way that it is due to the times. 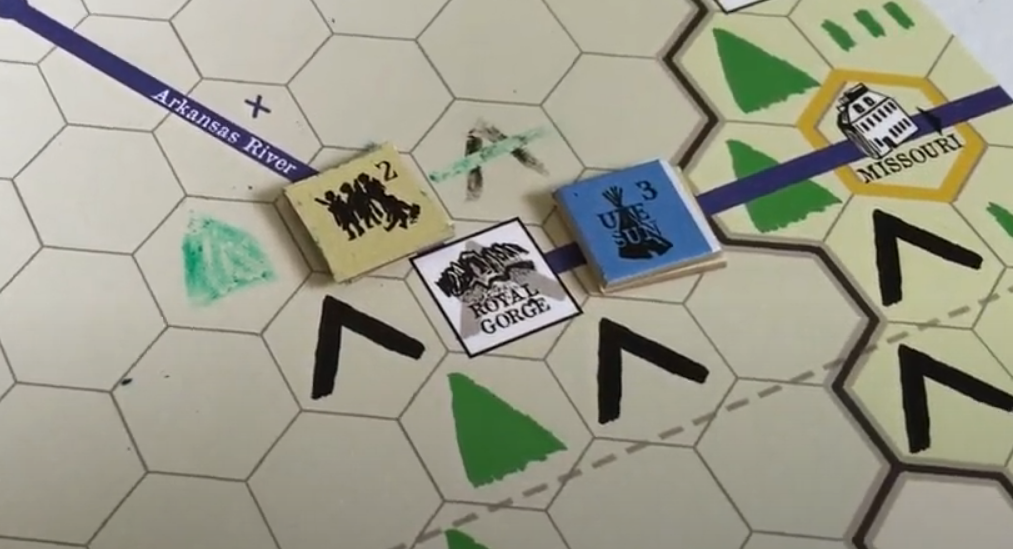 How important was it for you to portray indigenous peoples with authenticity and respect?

Very important. The native Tribes have a majesty but I also think their mystique was important to capture. I think if we saw the Tribes moving in the hills before us, there would be a mixture of wonder and danger. That mystery was important. Being American I find it is important to maintain both the histories of the Tribes and the Americans together. We are both connected to this wonderful country.

What’s next for you?

That is always tough to say. I let the inspirations sort of tell me what to make. But on a printing level we are interested in printing Cave Evil and the many variants we’ve made for it through the years. Since we got used to the printing problems last year, printing things smaller in size, I think this seems more do-able in 2022. There are indeed shortages and issues to contend with, but we developed a little understanding how to tackle that. On a design front, I just don’t know exactly but there are a few directions I’d like to explore.