Exploding Kittens on its name alone may not sound like the type of game that would grab your attention – especially the feline friendly amongst us – but it certainly did back in 2015, with an explosive (see what I did there?) Kickstarter campaign that remained the highest funded game on Kickstarter until Frosthaven toppled its crown only last year. We spoke to the creators of Exploding Kittens the company, Elan Lee, and Matt Inman, about how the company came to be, what it’s been up to, and further, where it’s headed.

This article originally appeared in issue 57 of Tabletop Gaming. Pick up the latest issue of the UK's fastest-growing gaming magazine in print or digital here. 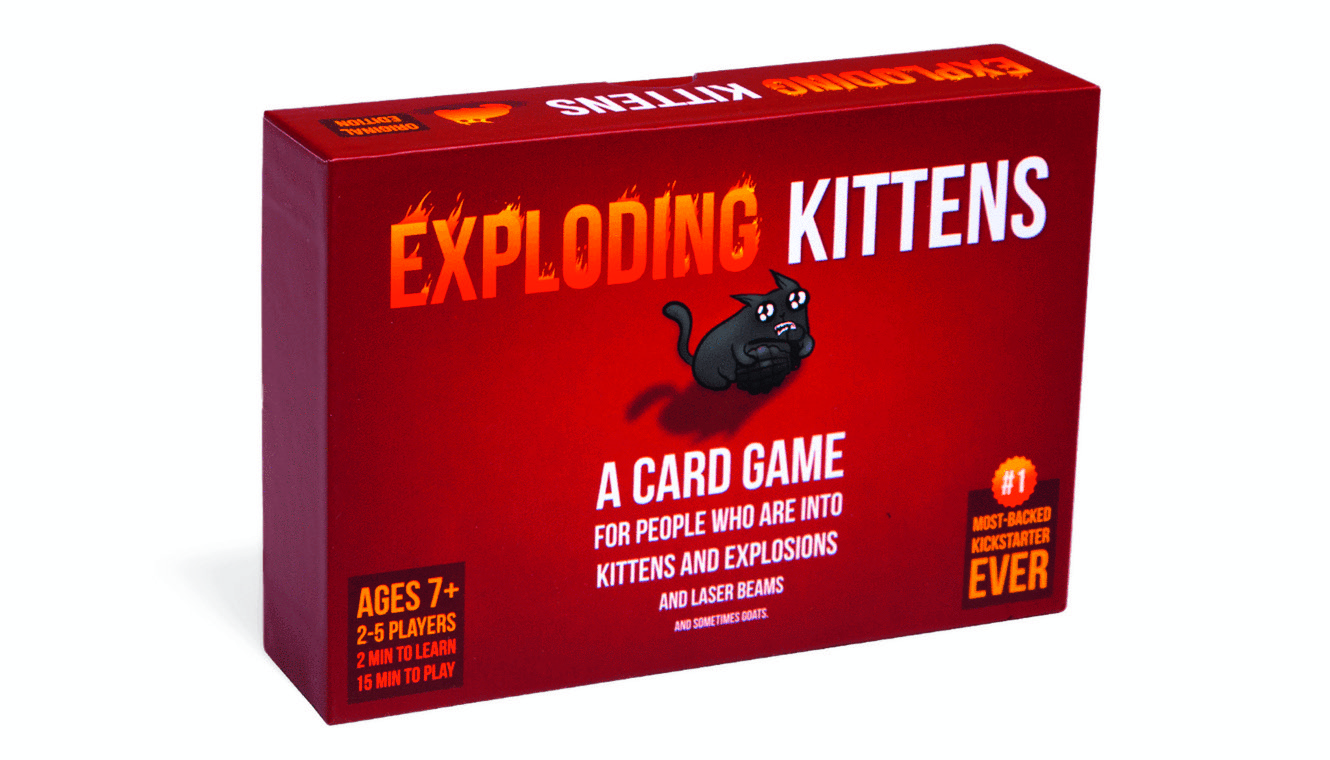 We begin with a little about both. Inman was known prior to Exploding Kittens, first for a comic of his going viral – How to Tell if Your Cat is Plotting To Kill You – and then for his full time comic writer role in founding The Oatmeal, a comic and humour website. This is the same artistic direction that catches our eye and makes an Exploding Kittens game stand out from the shelf. Now though, “in my role, I oversee the design team to bring our characters and the games to life”, Inman tells us, noting that his distinctive illustrations have appeared on all ten of Exploding Kittens games, as well as in their new venture into mobile apps, with Kitty Letter.

On the other hand – paw? – Lee balances this by saying “My job is mostly to make sure the stuff we make is fun,” Having worked in the video game industry before moving to the board game world, he resigned from the position of Chief Design officer at Xbox.

“Seven years ago, I quit my job at Xbox. I needed a break from digital design and wanted to work on something more social. Something that friends and family could play together in the same room. I designed a simple card game with my buddy Shane Small and we called it “Bomb Squad”. The idea was simple...Russian Roulette with a deck of cards. We used a standard deck of poker cards and wrote the word “bomb” on each of the jokers” This simple and fun game was the foundation for what would later become Exploding Kittens.

Through a mutual friend, Lee met Inman, and played the game with him. It was at his suggestion that the game turned from a hobby to a reality, as he offered both to illustrate the cards, and told him frankly that “the game has no soul. Being scared of drawing a bomb is obvious and boring. What if instead, the thing you were most nervous about drawing was an adorable little kitten? We could call the game Exploding Kittens”

“We launched with the goal of raising only ten thousand dollars for what we thought would be a simple little weekend project. 30 days, nearly $9 million, and numerous broken crowdfunding records later, we had ourselves new full time jobs.”

“It caught us by surprise”, admits Lee, of the phenomenal success of the project, which many designers would love to replicate. What was the secret to their success?

“We did some smart things along the way. In crowdfunding most people fixate on funding. That’s a mistake. They should fixate on the crowd.”

“For Exploding Kittens we hit our initial funding goal in a matter of minutes, so that’s when we stopped trying to raise funds. From that point forward, everything we did was focused on using our campaign page to throw the largest party on the internet and making sure that everyone knew they were invited.”

“We abandoned things like bulk discounts, stretch goals, additional reward tiers, merchandising, or any of the other staples that traditional campaigns use to try to extract more money from their backers. Instead, we built a point system, social communities, and missions that rewarded our backers for taking pictures of an actual BeardCat or 10 Batmans in a hot tub. The deal was simple: Do these silly/amazing things with us, and we’ll keep upgrading your game for free.”

The result of it was a huge range of support, with pictures flooding the internet of fun and silly challenges put by Exploding Kittens, building not only a community, but a fear of missing out on those who hadn’t backed. 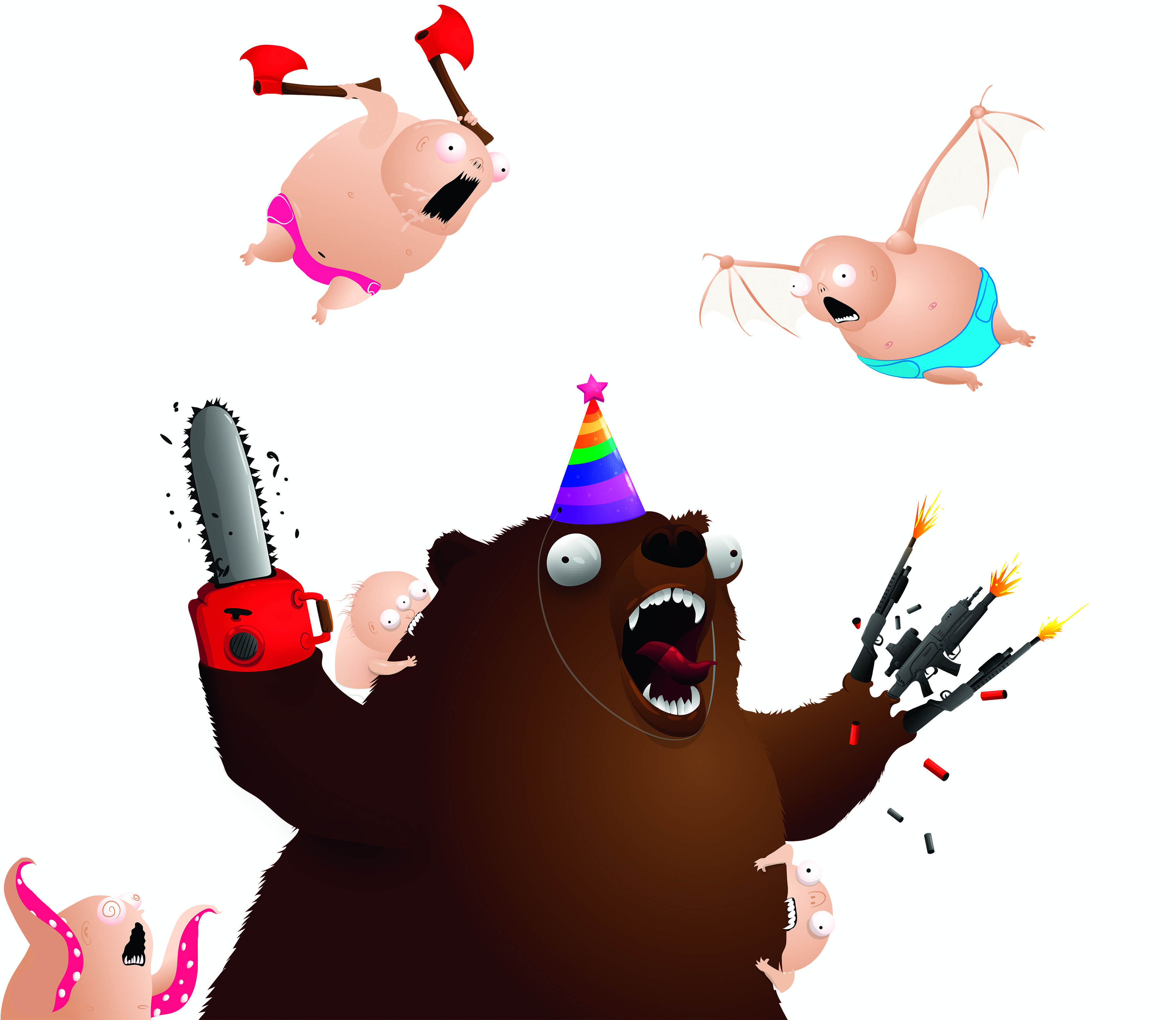 “Our goal was reached in 10 minutes of the Kickstarter launch,” Inman explains, “by the end of the two days, we had $3 million. The campaign still holds the record of most backers on Kickstarter.”

It wasn’t all plain sailing, as Lee explains, “when we started Exploding Kittens, we didn’t understand the logistics of creating and fulfilling the game. We had no experience in the tabletop games industry or any guidance, so we did things differently than the traditional companies in the space. I’m not sure they really knew what to do with us. The name of our game didn’t sound anything like the other games on the shelves, our box didn’t fit in, and the first line of our instruction manual was ‘Hey! Don’t read these rules!’.”

However, whilst they bucked expectations, it’s fair to say they did so rather successfully – not only do the many backers own a copy, but it’s common enough to pick up in bookshops and some supermarkets, meaning there’s a potential spot for it in everyone’s home. In its recognisable format, with just a few rules to pick up, it’s become a gateway game for many, and the NOPE card, which prevents the action of a fellow player, a point of hilarity, and a favourite of Inmans. Lee’s favourite is a quiet nod to a recent game, explaining “Tacocat is my absolute favourite card in the game. Because when you spell Tacocat backwards, you still get Tacocat. Every time I show that to a new player, I delight in watching their brain slowly drip out of their ears.” The physical affect within the game is that finding a pair of them allows you to steal a card from another player, but the palindromic affect on the brain comes up again in future, with Tacocat Spelled Backwards, a more recent Exploding Kittens game.

Given the way that Exploding Kittens has grown, it’s made its mark in the lighter game genre. It’s no longer a one game show, though of course it kept the name. From Throw Throw Burrito to Poetry for Neanderthals, A Game of Cat and Mouth (a game we rated a Must-Play) to Tacocat Spelled Backwards, to its latest game A Little Wordy, it’s been a jam packed publishing journey.

Each of them are distinctly games by Exploding Kittens, with often unrivalled physicality, and a humour that prompts laughter around the table. In Throw Throw Burrito Extreme for example, you’ll be inflating giant burritos to hurl at one another at the first opportunity. In Poetry for Neanderthals, you may only describe complex terms using one syllable answers, but if you fail, you get bopped by a two foot long inflatable club. Bopped “gently(ish)” qualifies Inman.

“The idea for the game came from some friends of mine. They showed me a word game they invented, where each player had to describe a complex scenario using only single syllable words. After playing for five minutes, I sounded like a caveman at a job interview, and the entire room was in hysterics. We spent the next few months figuring out how to simplify the ruleset and then share that experience with the world,” Lee explains. 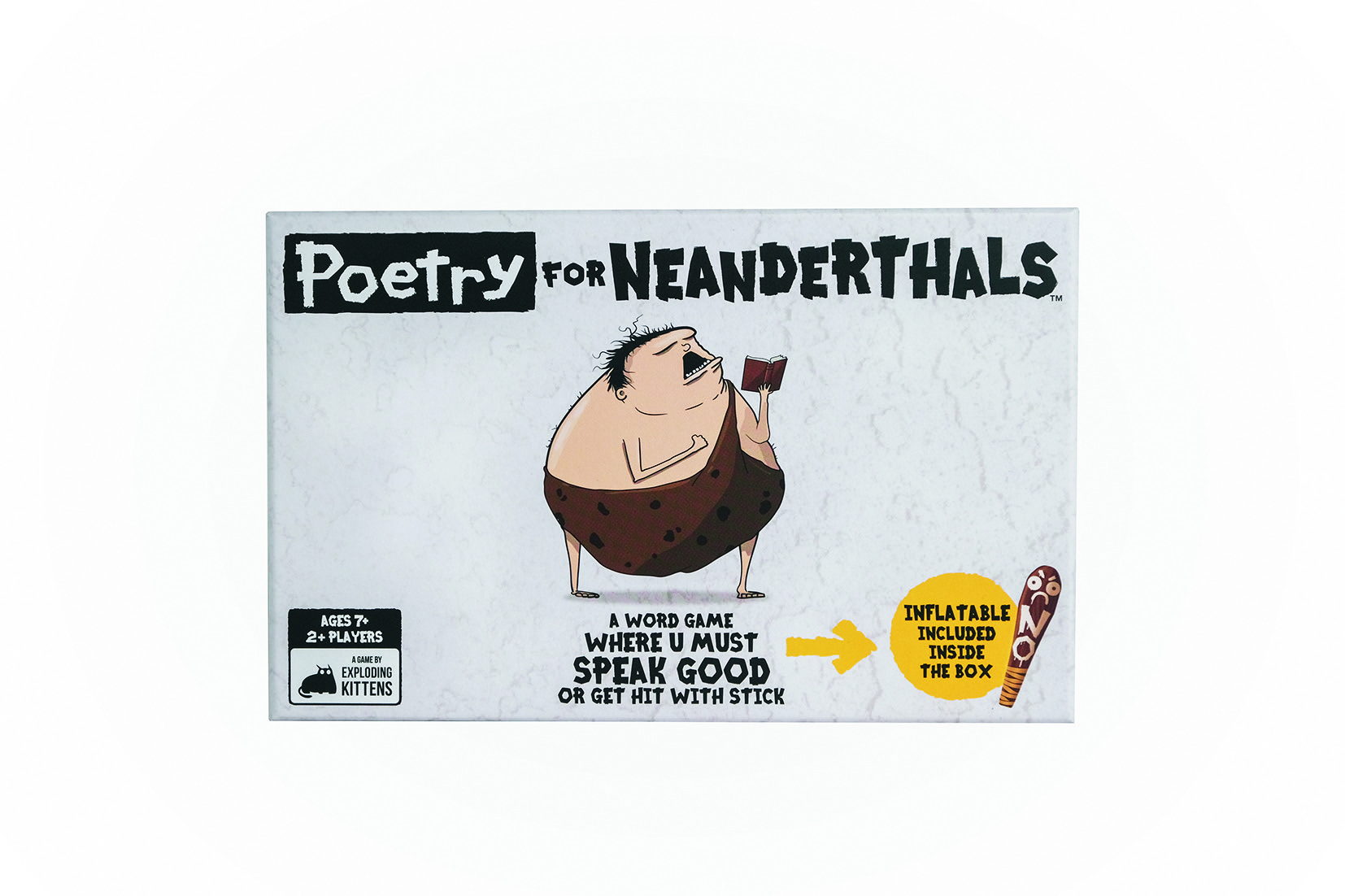 That hilarity (or potential for it) feeds through all of their games, and so it’s reasonable to assume it was an intentional aspect of future design intentions.

“Since the very beginning, we have aimed to inspire people to connect, laugh, and play fun games in the physical world. Each one of our games offers a hilarious spin so everyone playing can have a fun person-to-person experience,” says Inman, “whenever you get together with your family or your group of friends for game night, you never remember the game mechanics or maybe even the game you played. You’ll always remember the hilarious moments where you’re laughing so hard you’re crying. We wanted to build that into games so people would move and interact with each other, rather than just sitting around a table with a deck of cards.”

“We like to say that we don’t build entertaining games, we build games that make the people you are playing with entertaining,” Lee tells us, “we want to build a place that puts great games out into the world and gives other inventors the tools to do so as well. Every time we convince a family or group of friends to put down their screens for a night and celebrate the people in the room with them, we get one step closer to the future we’re aiming for.”

Of course, as a result we like to imagine their game design meetings to be hilarious, frantic, and a little bit bonkers, but it’s not always that way.

“Game design is simultaneously the greatest and worst job I’ve ever had.” Lee clarifies. “So much of design is defined by the parameters. When we have a really well defined box like ‘a game that mixes dodgeball with cards’ or  ‘a version of hide and seek that you can play around a table’ the job is really fun, and the sessions are extremely productive. But when we sit down with a task like: ‘build something great’ we often talk ourselves in circles and ultimately end up with unusable garbage.”

The studio has certainly grown, as we ask Inman about the game art style.

“When it comes to the actual creation of our games, Elan used to design each card to facilitate a new kind of interaction and I would invent characters, names, and humour to match the card’s function in the game”, a job which has contributed to the distinct style that sets apart Exploding Kittens games from others at a single glance.

“Now that we have a company of over 55 people, there are a lot of people involved in crafting the perfect mix of gameplay and art, and it’s such a delight to work with a team that can produce such incredible games. Elan and I also still find time to craft our own games as a duo, always making sure to bring as much hilariousness into our game design as possible”. 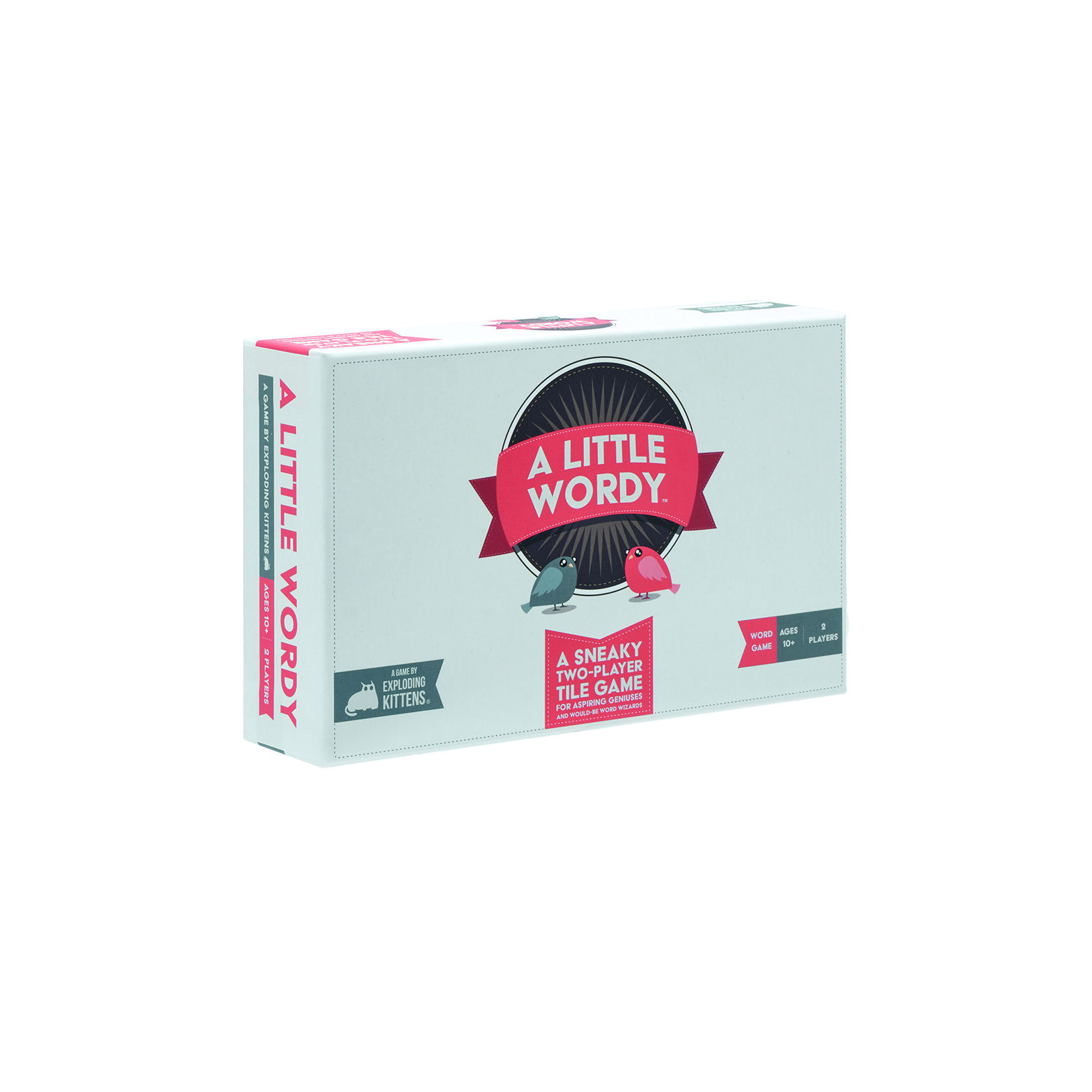 Where does the studio stand now, however? With Exploding Kittens being titular of the company, it’s perhaps tricky to step out beneath its shadow, but it’s come far. Representing where the studio sits now, it was A Little Wordy chosen by Inman. He explains:

“I’m very proud of how well A Little Wordy is doing right now because it shows off the range of our team.  Not only can we fuel your next game night with friends, as a two player game A Little Wordy works for those just at home with a partner. Also, now I can say my wife and I have created something while stuck in quarantine and it’s not a baby.”

“While 2020 was by far the most challenging year we faced both personally and collectively as a company, it was also our most successful year to date, with sales increasing by 82% year over year,” Lee tells us. And as for plans for this year?

“More games! I have a few notebooks filled with hundreds of game concepts and Matt has ten times that many notebooks of sketches and comics. Seems like we ought to do something with them.”

“We can’t wait to show you all what’s next” Inman adds.