Renaissance Battles and Rules to ﬁght them 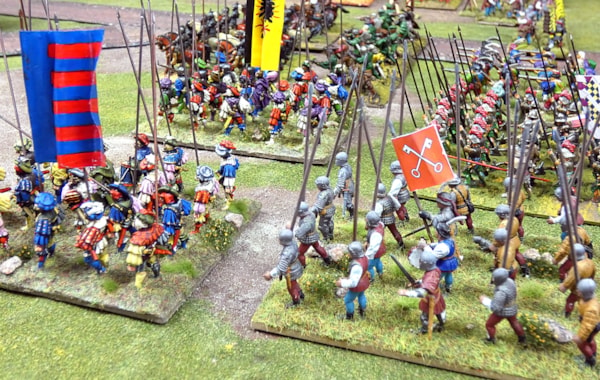 Plus a knight or two: what’s not to like?

George Gush and his WRG ruleset was my first introduction to wargaming the Renaissance period. Mike Andrews – my ‘A level’ history teacher – did a good job of teaching me the background to the period, and so equipped, the adventure began. Yet again in my wargaming life it was George Gush with his Renaissance armies reference book published in 1978, which led to a flurry of releases for the period from Miniature Figurines, Hinchliffe and Connoisseur Figures. The wargames world had never seen armies like those of the Italian Wars: pike armed infantry wearing clothes that were multi layered and multi coloured; knights in full panoply with myriads of pennants and banners; war carts; big guns; little guns; organ guns. . . even crossbows and arquebusiers. Painting competitions throughout the land were full of Landsknecht units in psychedelic splendour.

One such painter was an old friend of mine, Dennis Coleman of Hovels fame, who – as well as supplying me with a brilliantly painted, but lethal pike block (the pikes are needles without the pointy end being trimmed!!) – also introduced me to Peter Gilder and the North Hull Wargames group. These guys introduced me to the black arts of pike and shot warfare. Peter, who was a great man, and hobby hero of mine, also supplied me with vast amounts of castings at trade prices, so the army grew… and grew. Some four decades on these self-same units are still doing service under my command.

Rules came in and out, as did the periods popularity. The units gathered dust until inspiration came from an unlikely source: Games Workshop! These fine gentlemen, released a fantasy range that looked – and were armed – as Italian Wars soldiers. They were very nice, and a joy to paint. As I only discovered these after that particular GW slot in time, I had moved on to pastures new and the internet was awash with cheap figures. But they were huge, especially the cavalry. Luckily, I am not a scale purist and I say that – from around two or three yards away – a nicely painted and based figure, loses the height difference. That meant that my huge GW knights (definitely the “three shredded wheat” men) happily cross swords with their smaller Hinchliffe opponents. The army continued to grow.

I now had enough forces to provide two armies, which was a good job as I subsequently left my two opponents behind, along with the club we all previously attended. I also had some scope to write a set of rules, which was more suited to my style of gaming, which is fast play, large armies, no serious book-keeping and fun. So here they are!

I am a child of the Imperial age, so all measurements are in inches and the dice used throughout these rules are the ‘normal’ D6.

Armies are made up from commands, each of which is made up of between 6 and 12 individual units. A unit is a formed infantry or cavalry unit, a skirmisher unit of cavalry or infantry or an artillery piece. Only a French army can form Artillery batteries, and these can only be a maximum of two pieces. This ensures that no more than two guns can target a single unit, which reduces their effect on the battlefield. Artillery units must target a separate target unit, there is no concentration of fire allowed, with the exception of the French battery.

Reference to the Master Unit play-sheet (included as a download http://ttgami. ng/extracontent), shows whether the units are key to the army. The only book-keeping the player must do is to calculate the key unit total their force has, and then agree the total losses at which the army breaks.

For example, a force of three Gendarmes (key), two Stradiots (1/2 a key unit point), three units of skirmisher crossbows (not key) and six pike blocks (key) has a total of ten, so if players decide 50% breaks the army, once five key unit points have been lost, it is game over. These percentages can be the same for a quick pick-up game, or it can be tailored to scenarios as required. The sheet shows unit title and type, Heavy cavalry foot or skirmish infantry for example.

The next three columns show the units fighting ability when fighting to the front, the flank or in special situations, such as when in broken terrain or situations not envisaged by the rules!

Defence is the number of dice rolled to oppose ring. The highest roll is selected, and gives heavily armoured gendarmes, lancers and Reiters some advantage. All troops roll one dice only when fired on by artillery. A points cost is included if required. 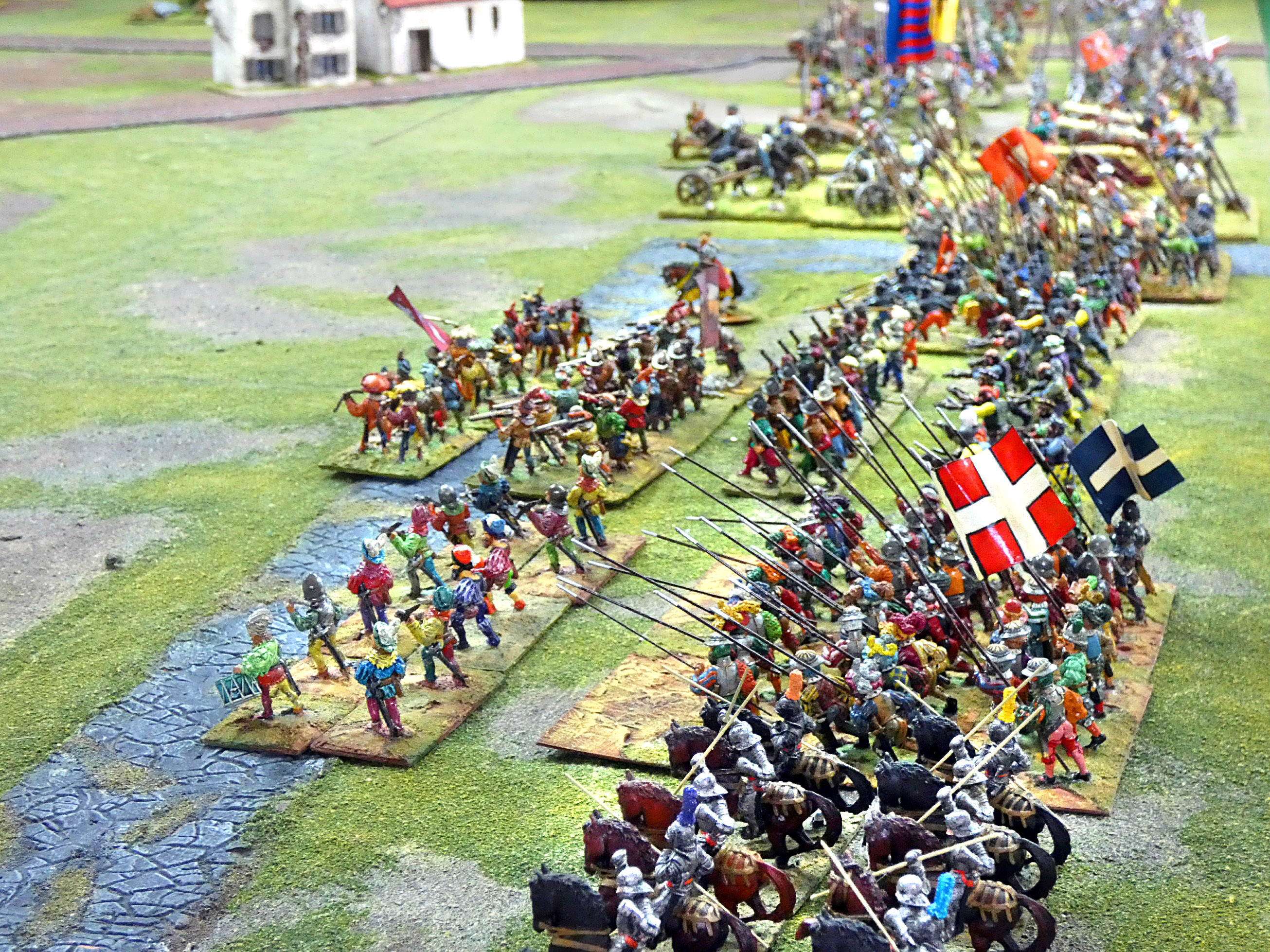 Above Image: Italian Lancers, French pike, skirmishers, and assorted foot with crossbow and arquebus deploy for combat. All figures featured in this article are from the collection of Mark Pemberton and the author. 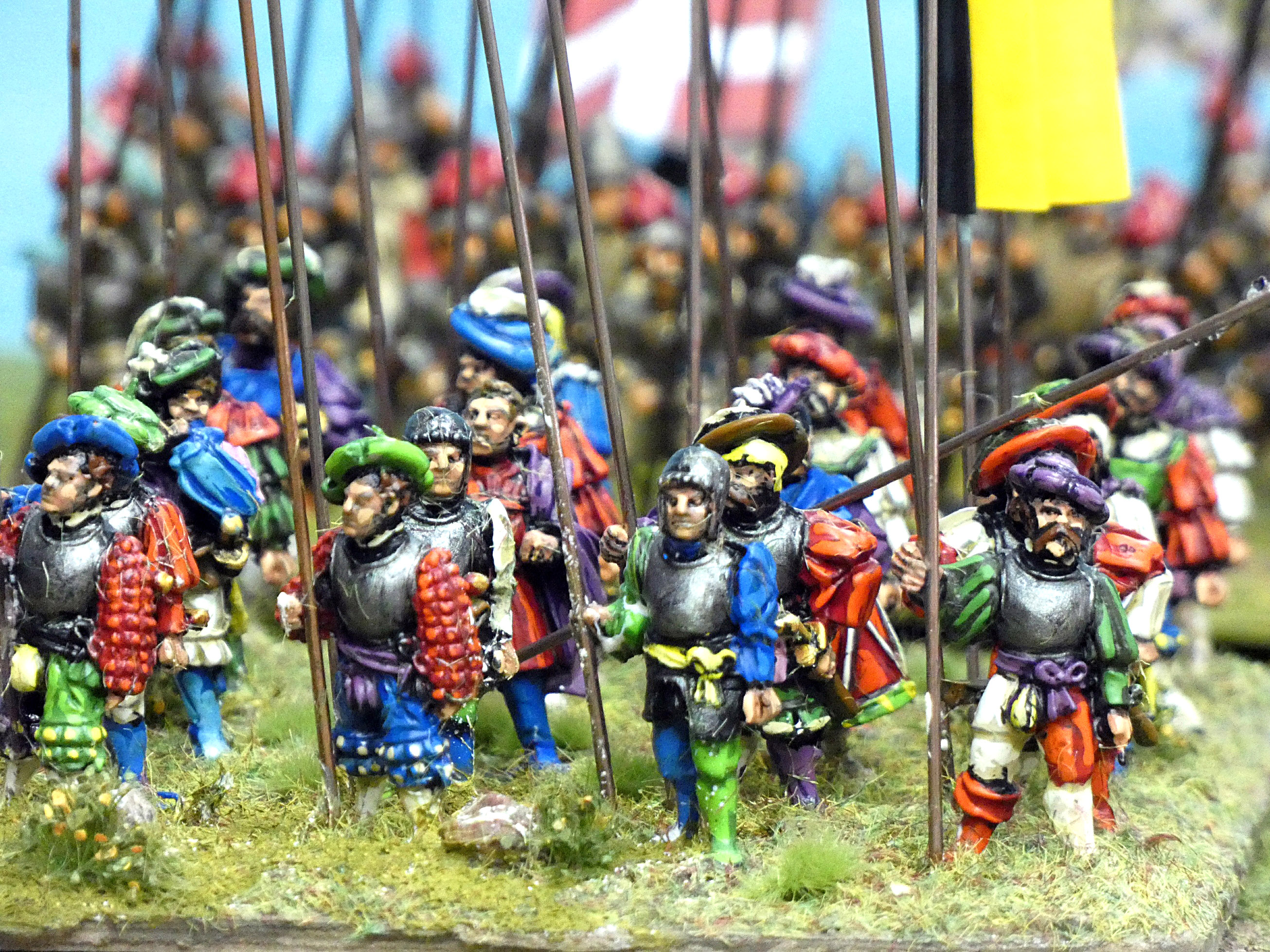 Above image: The heavily armoured front ranks of pikemen look pensive before the off. 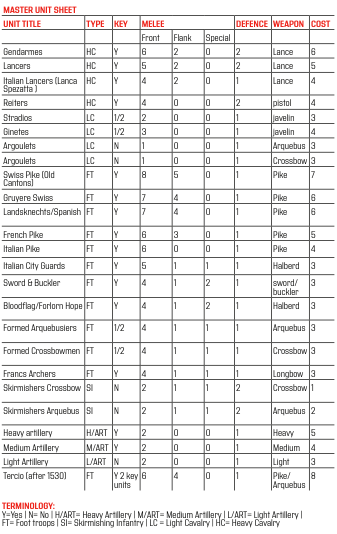 Movement is determined by troop type, and has some strict rules for moving and manoeuvring in the same turn. Some units, mainly cavalry and skirmishers can move and wheel and some can only move or wheel. A complex manoeuvre is one that involves changing formation or direction via a ninety degree turn on the spot, rather than a wheel. This has a 50% chance of failure, which causes a disorder, so is not for the faint hearted.

Ranges are as follows:

Firing is a straight opposed dice roll, with the following adjustments:

◗         -1 to the firers roll if Javelins, Crossbows, Longbows or Guns at more than half range.

◗         Some troops (Gendarmes, Reiters, skirmishers and Lancers) roll 2 dice and choose the highest as their defence.

◗         All the above additions and deductions are cumulative.

Units break and are removed from the field, when they have suffered the following hits from fire or from melee losses:

Melee is determined by adding the appropriate factor from the Master Unit sheet to a D6 roll, and comparing the total, to the enemy unit’s result, using the same procedure. The winner inflicts a casualty on the loser. If one side has a score of double or more on the loser, then three hits are inflicted rather than one. Units that are disordered deduct 1 from their dice roll. 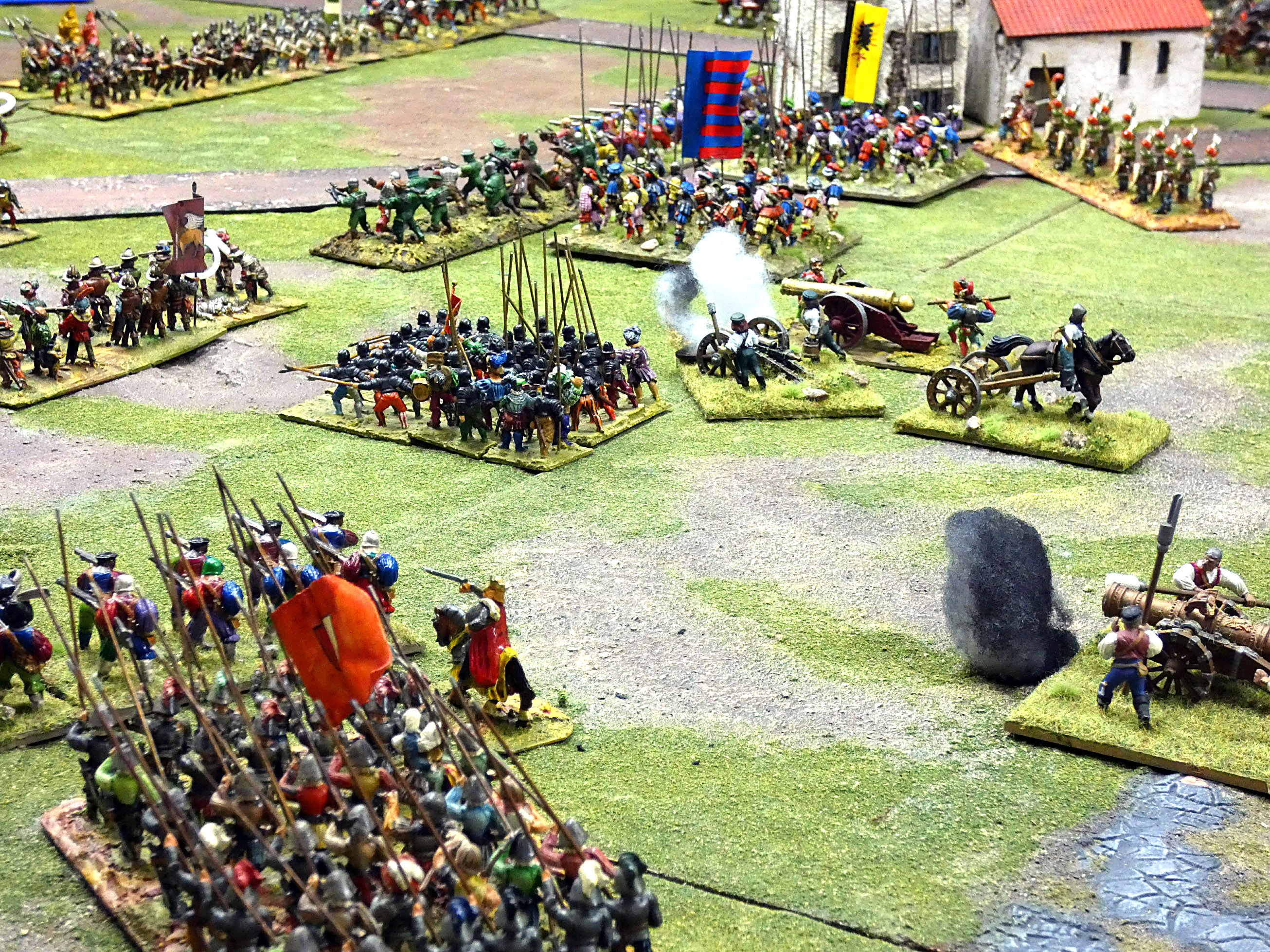 Above image: The artillery open fire as the forces advance into range.

The situations in which this result occurs are as follows:

◗         Cavalry with a melee factor of 3+ charging infantry without pike or polearms. 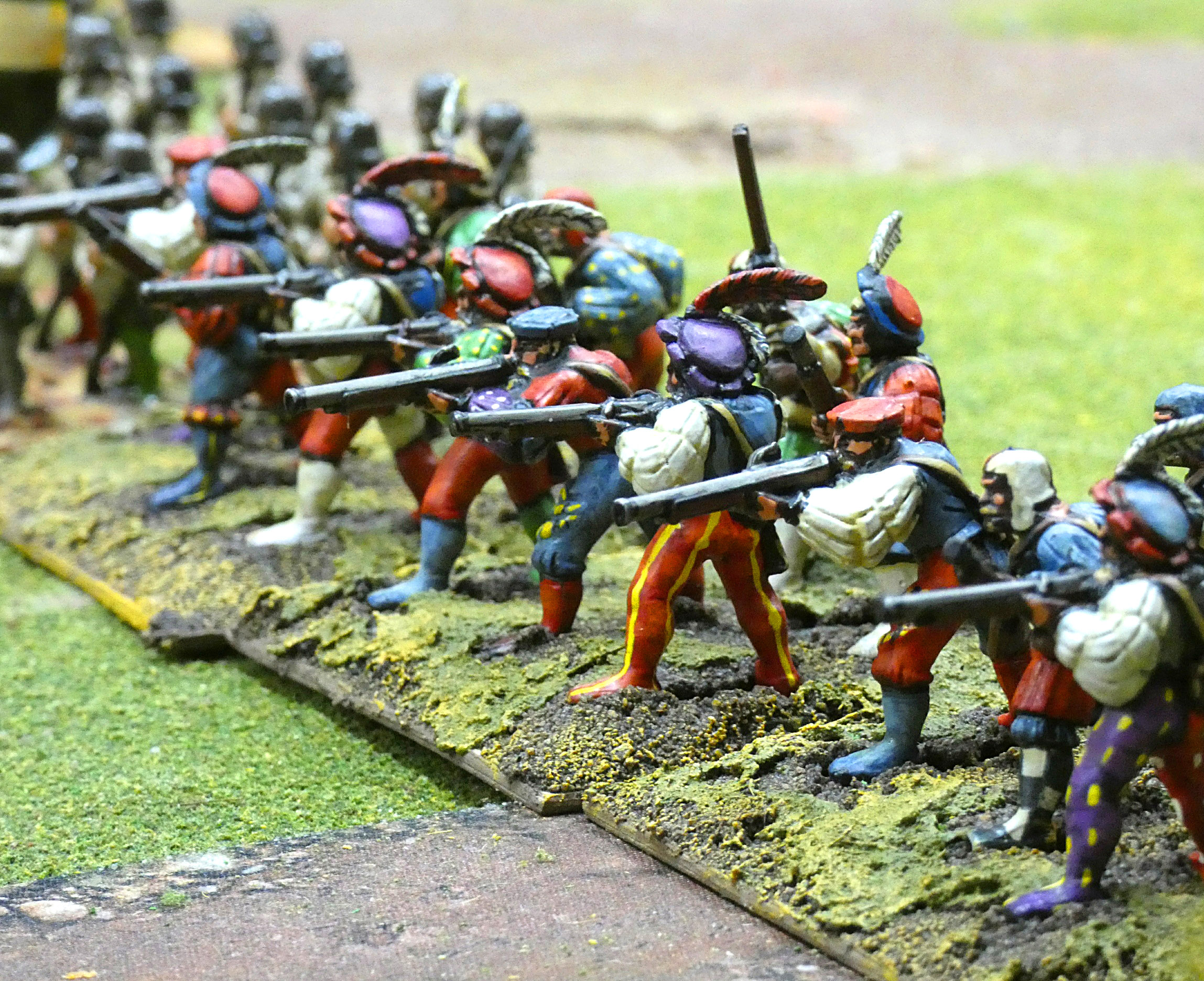 Image above: These are some arquebusiers by Games Workshop.

The astute reader will have noticed that – so far – there is no mention of command and control. This is a subject I have wrestled with. There is little or no information on how troops in this period were marshalled, and commands transmitted.

Were written orders sent to individual commands? If so in what language? With Italians, French and Germans and the many derivative languages based on these, there is a lot of scope for error. Or did the generals meet, formulate a plan and then plough on as the mood took them? This last option appeals to me the most, so the following are our command and control rules. If you have a better system or do not like this one, substitute it for this one.

Our forces are made up of commands of between 6 and 12 units. Take the number of units in a command and deduct 5 from that number. Record the brigade command number on a dice to be kept by the force commander. The number is reduced by 1 each time a unit in the command is lost.

At the start of each turn, roll a D6, and this, added to the above score, is the number of units that can be moved in that turn, by that command. The more perceptive will realise that if a 6 is rolled there is one extra command point available. That extra point can be used to move one unit twice (but not to fire twice). 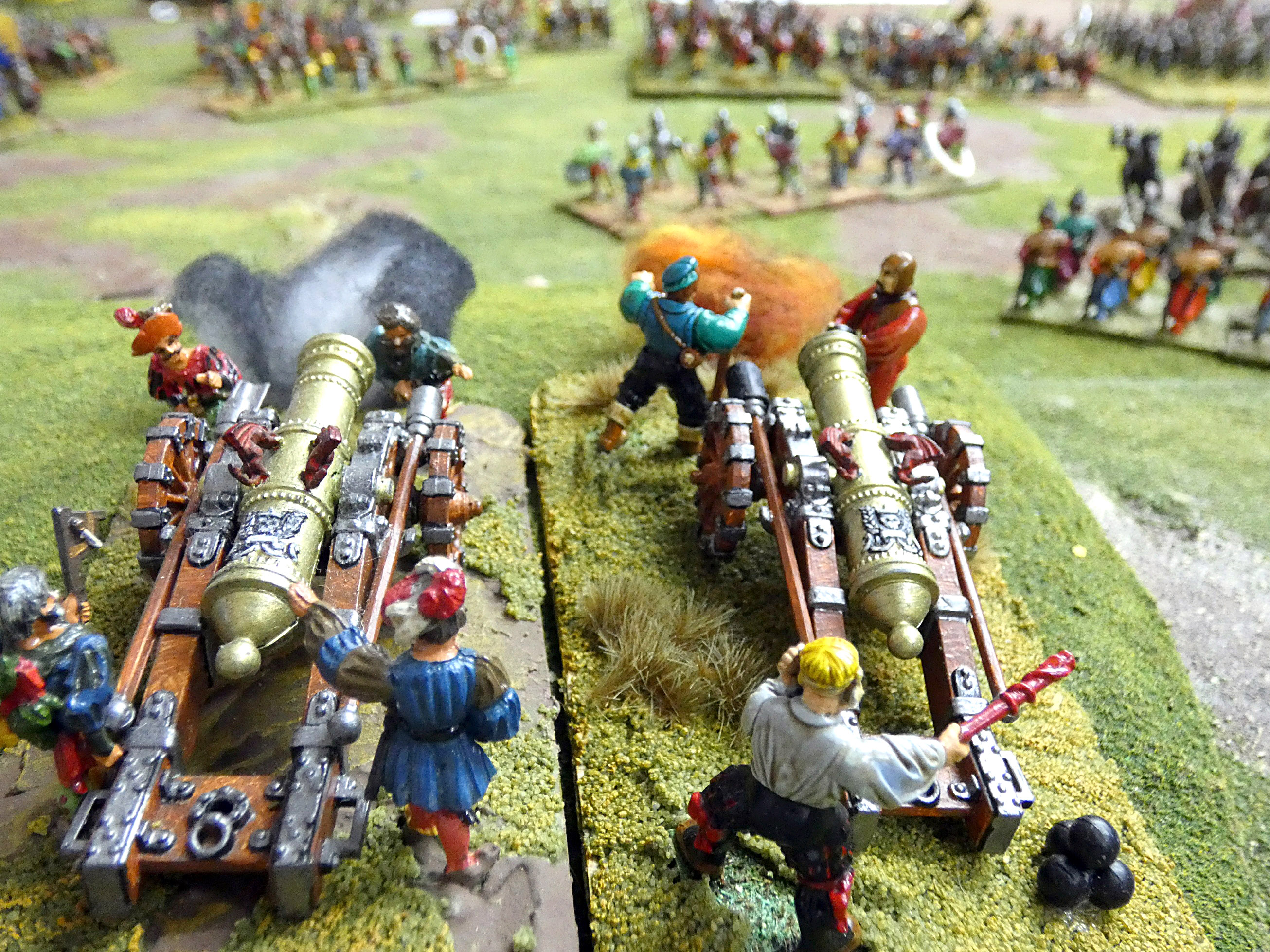 A command of 7 units calculates its command score as follows:

And there we have it! We play these rules quite often, the combination of the Army break point total and the individual unit movement friction, gives an unpredictable game. Ours are usually tense affairs, which work particularly well as multi-player games, reflecting the disjointed nature of Renaissance Warfare. I hope you use them and enjoy the experience.