Purple Haze: Exploring the horror stories of war in this new game Boots on the ground 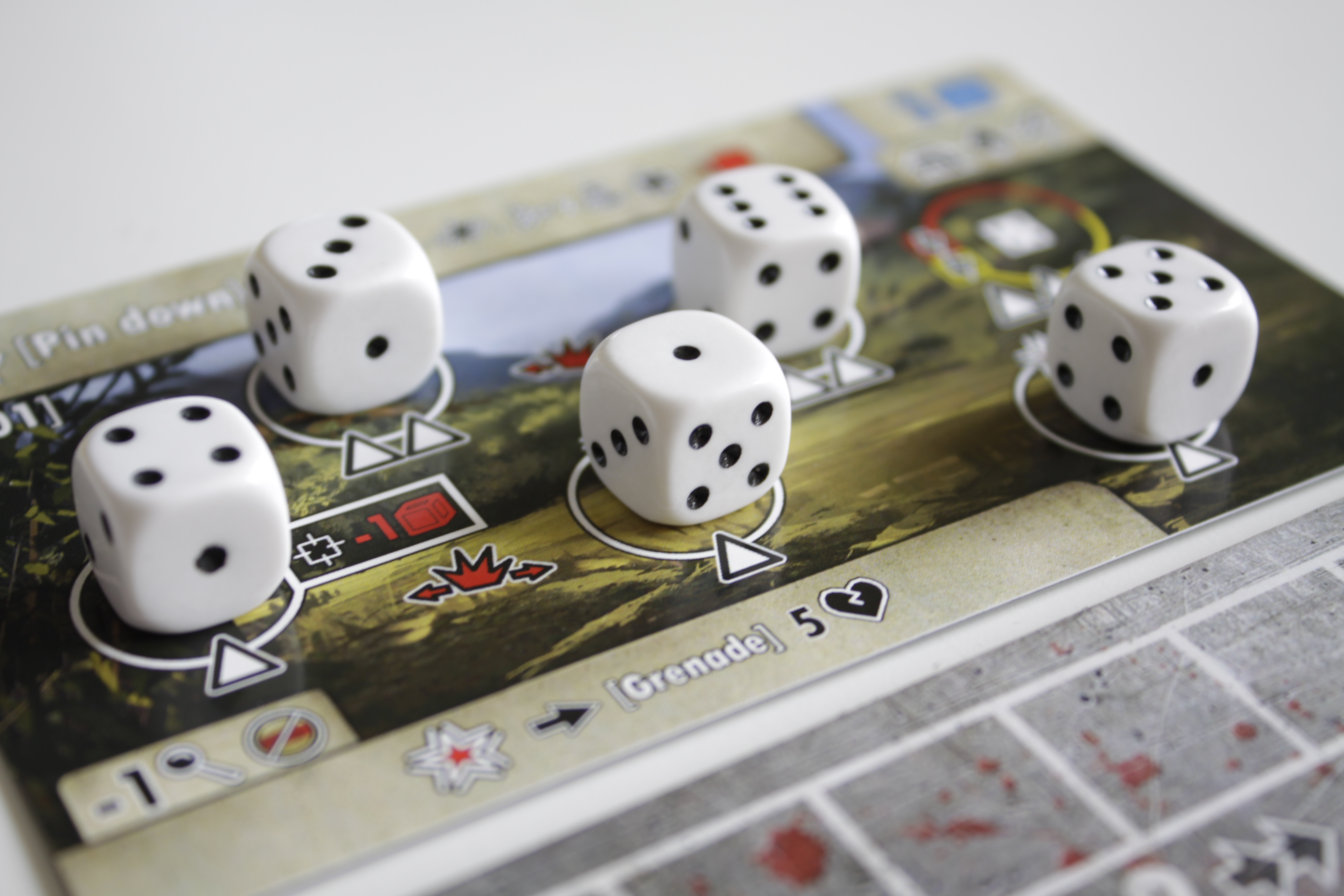 The Vietnam War has been a popular setting for war film, fiction, and games because it contains contradictions – especially for the west. It’s a source of great shame in the use of napalm, the failure of military intervention, while also, on the ground level producing sympathy for those young men sent to the peninsula for the horrors they endured.

“The atrocities of war often exceed comprehension,” says Bernard Grzybowski, a game designer from Poland who, when not creating or playing games, drives trucks for the Polish army, “when deciding to play a war game, each player must take into account the history and, as we know, it was not always pleasant.”

Purple Haze is a narratively lead board game that offers us conflict-side seats to the experiences of young US marines dropped into the country.

“We call it an immersive story creation game because players’ decisions impact on the fate of the Marines in the squad, and the people that they interact with,” says Grzybowski, “it’s also a campaign game because of how the Marines in your squad develop, and the Missions in the campaign link together. And it’s a tactical combat game – the combat system provides players with multiple options and tough decisions.”

This is a step away from the usual ‘nam games, “in most games about Nam, you control large units of troops or consider the conflict from the strategic level. Purple Haze shows the day-to-day life of a Marine in the conflict,” says the designer.

WE’VE GOTTA GET OUT OF THIS PLACE 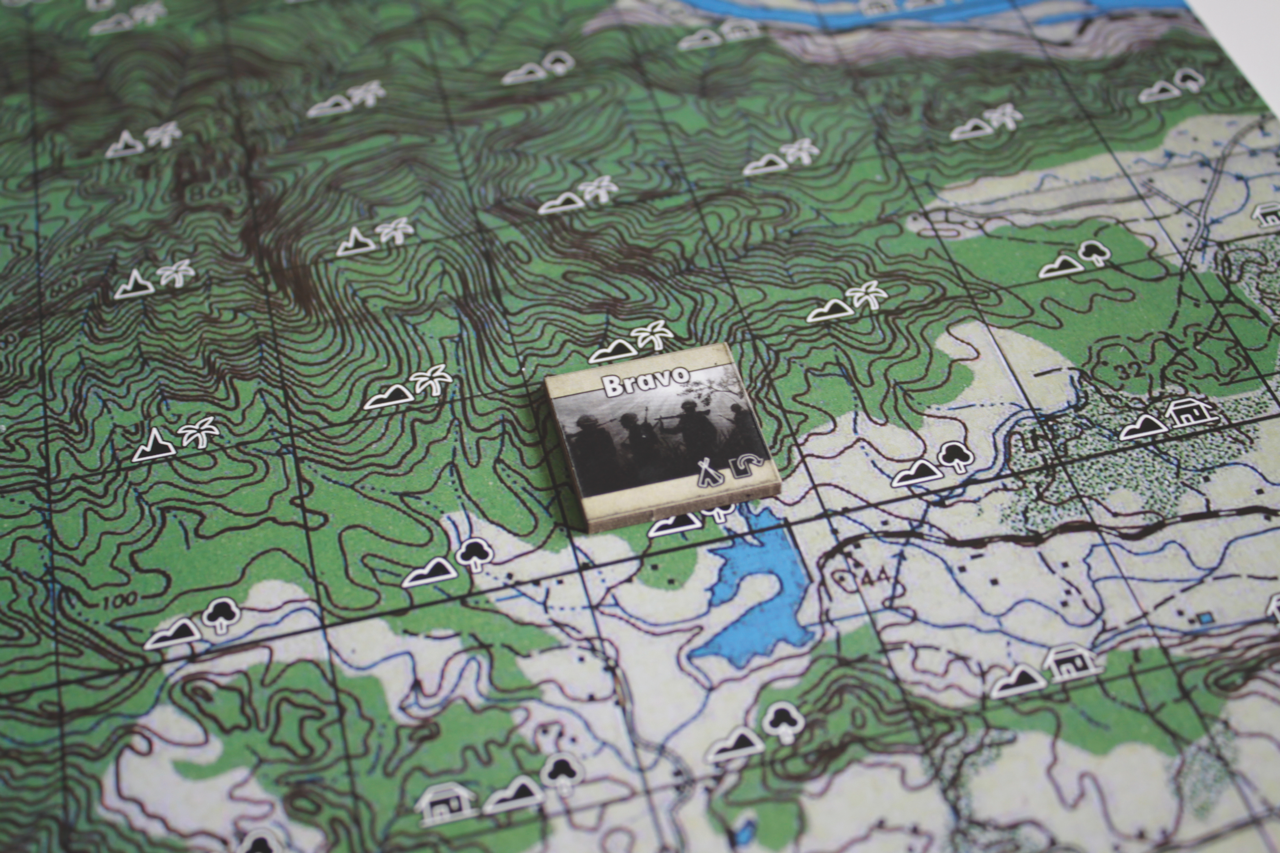 Grzybowski tells us that he enjoys miniature wargames primarily, but also deck builders and co-operative games. These different areas of interest explain the multi-systemed nature of Purple Haze.

There’s three diminutive boards to keep track of, plus your character's equipment and stats. The latter is just your character card itself, with it’s rookie stats, and their starting equipment in half sized cards. The other boards are a map of the peninsula, which will be strewn with event and objective markers throughout the game – it being your choices as to what you investigate, and the battle board which will be set up with a kind of dice matching system for combat.

The inspiration for the game wasn’t the actual histories of the war, but instead, a game for the Amiga called The Lost Patrol, “I was a big fan of the game, and I thought I could turn it into a quick-playing, streamlined, thematic, return-to-base boardgame,” says the designer, “but then it grew and grew, some mechanics were removed, others added. I started to demo it and got positive feedback about the way the mechanics created a Vietnam feel. I decided to find a publisher, and after a few handshakes I was working with Phalanx. Now we have an eight Mission campaign game, not including expansions.”

While this growth of the game itself from a simple idea of coming home, Purple Haze has its own character growth, integrating some RPG elements into the system.

“During missions, your squad will gain experience points, and after each mission, you can spend those points to level up your Marines,” explains Grzybowski, “your Marines may become one of five different types of Specialist, for example a Scout, Infantryman or Medic. Each specialist has four different levels. With each level, they gain more powerful skills that help them to survive.”

While this sounds like you’re ready to be a jungle crawling badass, it’s not that simple warns the designer, “however, as Purple Haze is not a story about superheroes but everyday people, be aware that even your best Marine can get shot and die instantly, or one booby trap can severely wound half of your squad.”

Alongside the physical health of the characters, it wouldn’t be a ‘nam game without a focus on the psychological impacts of the war.

“An important feature of the game is the attention it pays to the psychological impact of the war on the Marines’ lives. Physical damage can be healed, even if it means skipping a few Missions to recover in hospital. Mental damage by contrast accumulates and may ultimately result in a permanent mental debilitation that effects the Marine’s behaviour. He may become more aggressive in combat, or he can become stubborn and refused to obey orders. The effects may vary.”

Successes are measured using a smart dice match system – white dice are rolled for the target numbers, then players count up the number they roll form their skills and equipment, and any opposing dice are rolled too. Rolling more matches than the oppositional dice counts as a success.

This mechanic isn’t the only one that feels a little more roleplaying than many games of this theme. Exploration of the world map feels like a hex-crawl, entering new squares on the board creates situational and location based events. 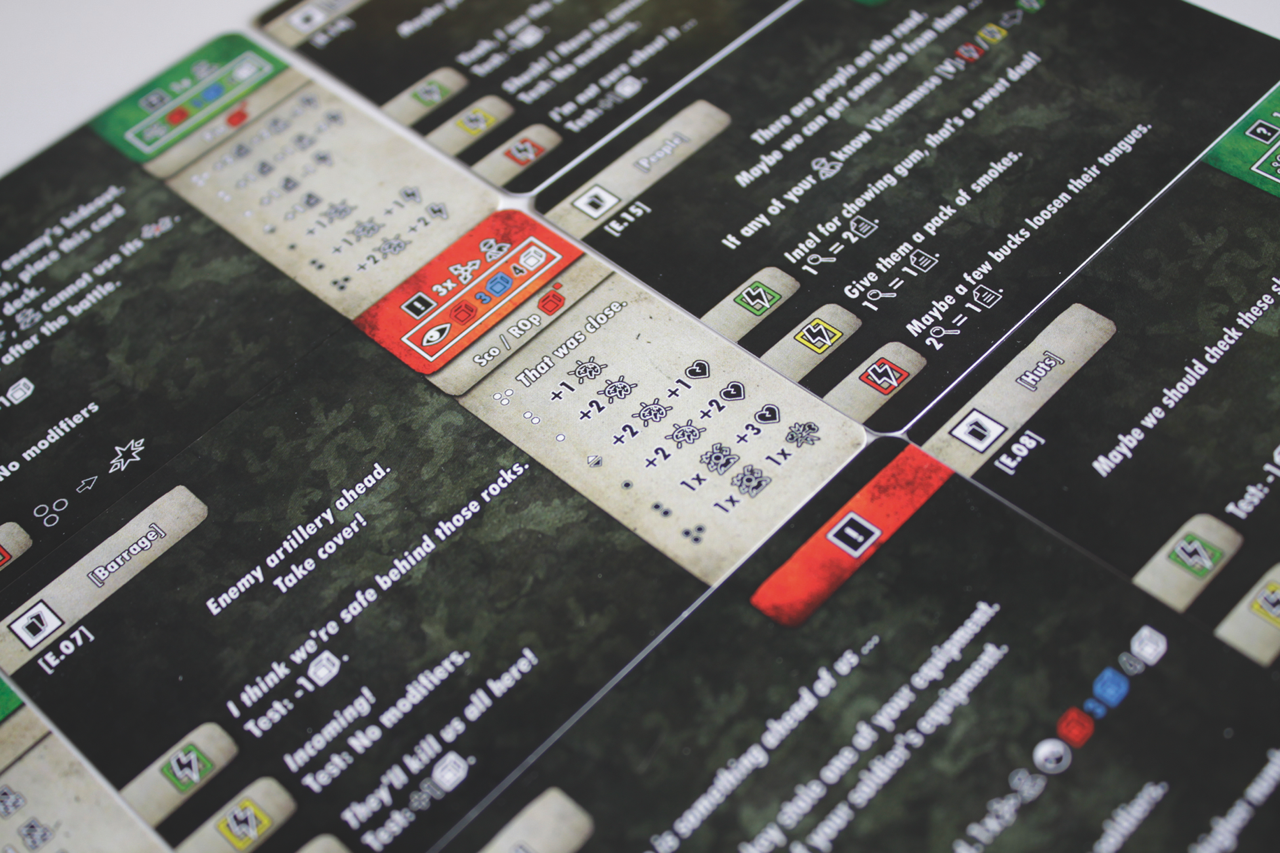 “As with the game’s initial inspiration, the Lost Patrol, the element of exploration is one of the drivers of the atmosphere of the game. Players never know what is behind the next tree, hill or village,” says the designer, “Mission objectives require that certain locations be visited, but the encounters and terrain create new narrative paths. It’s not possible to explore everything on the first or even second playthrough.”

“This also adds a puzzle problem-solving aspect to the game, for people that want to play it that way. There are optimal routes one can chart through the jungle if you wish to calculate them, notwithstanding nasty surprises en-route that may interfere with your planning.”

This expands into the Mission structure too. An included booklet draws the main narrative through the game, and each story event gets its own snippet of story to set the scene. Naturally we’re encouraged to read these out loud to get everyone up to speed.

“Each Story Event adds points on the map or Key Words in the narrative that you record, and branch off from that,”says Grzybowski. This system is new, and very pleasing for the designer, “the way it has now been worked in, it has become an indispensable part of the game. It creates immersion and allows us to link the different Missions in the campaign together. It also strongly adds to the replayability of the game as you can go back to it to experience ‘what ifs’.” 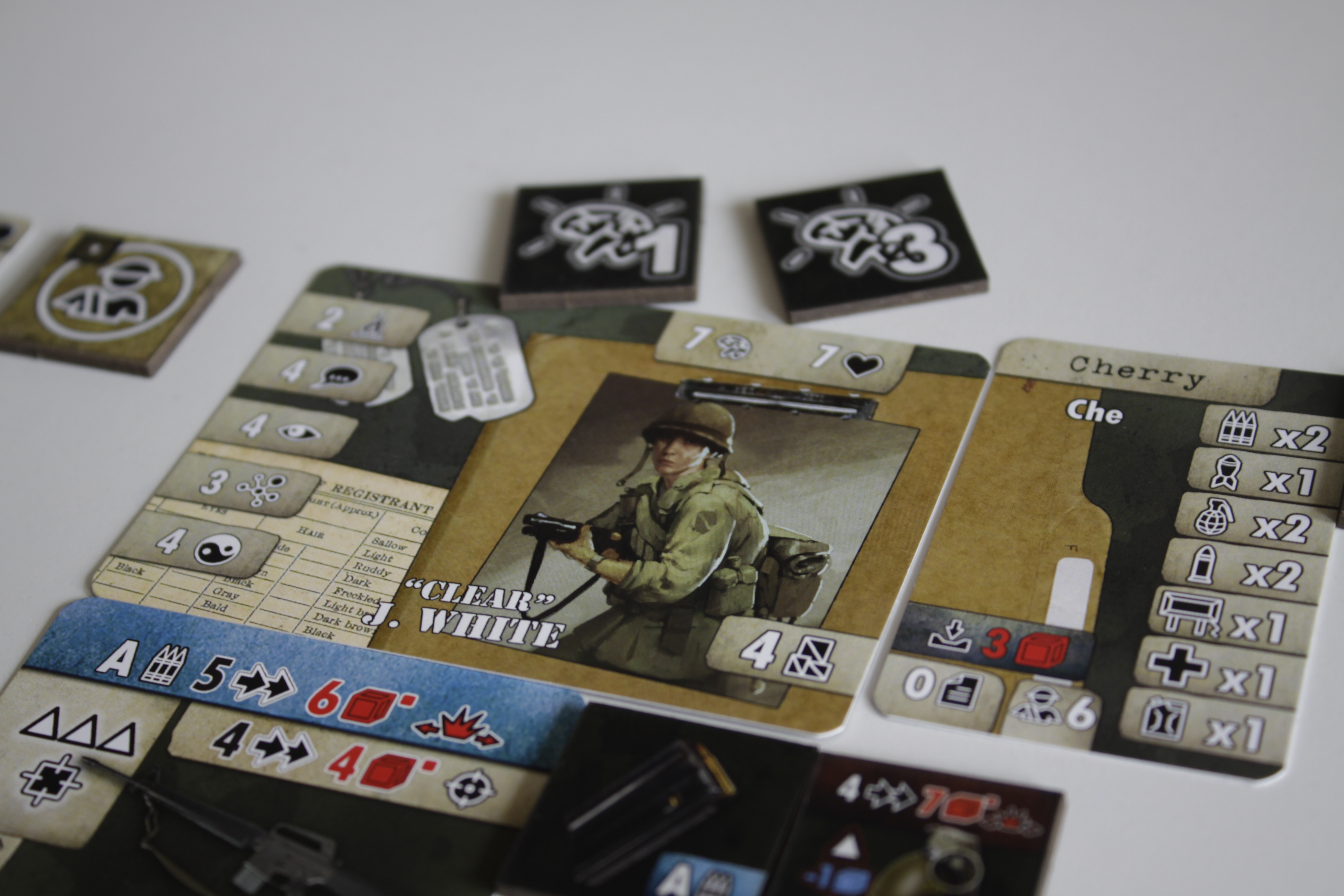 The part of this narrative experience that is most like a wargame comes, naturally, in the combat. The dice matching returns, but it’s all the more deadly. You have to spend your initiative wisely.

“I am a fan of skirmish wargames with miniatures, but don’t enjoy ones where a player does their whole turn, before the opponent acts – I like more dynamic games,” says the designer, explaining the designing of the system, “I wanted to capture this in Purple Haze through the concept of initiative: if you decide to attack an opponent with a more powerful weapon, the consequence is that it costs you more time, and hence initiative.”

This works as a pendulum system, with play passing to your opponent when you cross the halfway point of the track. The designer recommends Chad Jensen’ Fighting Formations as another example of this, whereas we recognise this system from the Digimon card game.

As with any game like this there’s the question of how people will play it. The ideal from the designer might be that players intend to play a hardcore min-max game, but then get distracted by the story elements that crop up.

“There are many types of players in the world. Some will love to immerse themselves in the game’s plot, while others will focus mainly on the mechanics. That’s certainly the experience we’ve had in playtesting,” says the designer on the subject, “I personally like both aspects of this game. The narrative builds the atmosphere, and the combat and exploration give us a chance to test ourselves in clashes with the enemy.”

And the stories that the game creates linger too, as you’d expect.

“I still have the memory of certain individual Marines in my squads and situations they got into, or when they got killed,” says  Grzybowski, “I hope that even players that focus on the mechanics will have something similar. This is a story about people, after all.”

Grzybowski is typically aloof about his upcoming design work, “As they say, every game designer has 50 games in his drawer and 300 ideas in his head.”

“I’ll first be taking a break once I’ve finished with Purple Haze. Designing and developing it has been like my own personal mini-war. If Purple Haze proves to be a hit, I can see scope for a similar game set in World War II.”

Purple Haze launched on Gamefound on the 25th of January 2022 – with a likely retail release (as with other games by Phalanx) to follow a successful campaign.

Since this was released in Tabletop Gaming Magazine, the project has fully funded to (at the time of upload) 356%! You can find the full campaign by clicking here.