Words by David Hiscocks. Photos by The Author & The Editor

Most wargamers enjoy buying a new set of rules, yet all of us have, at some point or another, wondered if we maybe have too many rule books on our bookshelves. All too often older, yet still useful rule books get put aside in favour of the latest new toy, and are left to gather dust. Sometimes it can be nostalgic as well as cost-effective to return to a tried and tested set of rules and recycle them for a new project. 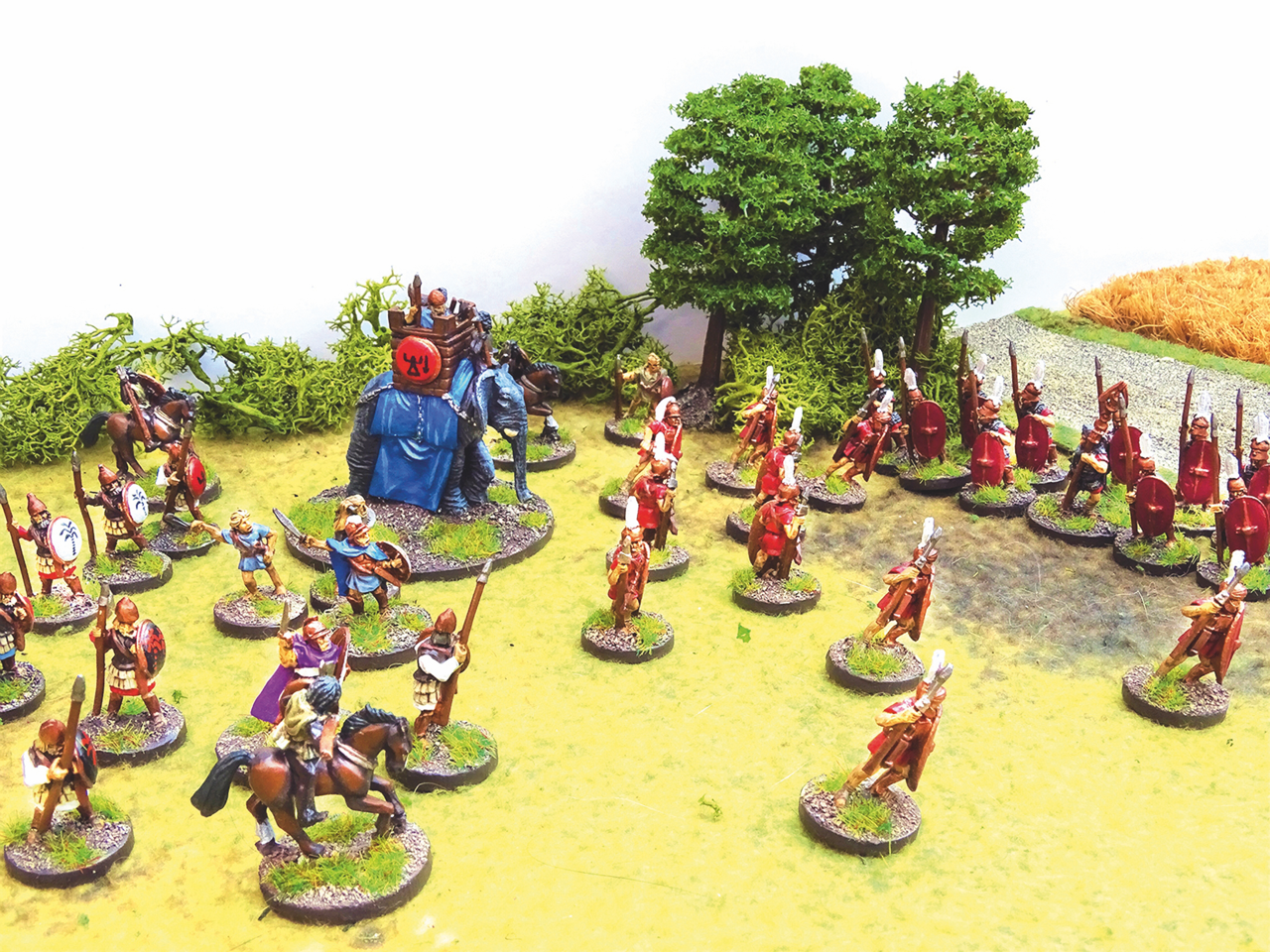 Since studying the Punic Wars at school I have long had an interest in the period, yet I have struggled to find a set of rules that gives me the tabletop experience I have been looking for. Whereas most rules are focused on the big battle experience, my own interests lie at the lower end of the scale. Across the three Punic Wars which spanned over four decades of warfare there were fewer than twenty major battles. While major actions such as Cannae demand our attention, in actuality the vast majority of the fighting in these conflicts consisted of minor battles and skirmishes. Furthermore, nearly all of the major set-piece battles began with several days of light skirmishing between the two combatants as they jockeyed for even the slightest tactical or psychological advantage prior to the main engagement. Skirmishes involving a few dozen combatants were far more typical of a soldier’s experience of war during this period than major battles.

With many other wargame projects on the go I have struggled to justify buying yet more rule books on the off-chance they will fit my needs (never stops us though, does it? Ed.). Recently, however, I was looking at my bookshelf of wargame rules and I came across my old copies of The Lord of the Rings Strategy Battle Game (TLotR:SBG), a series of three rule books first published in the early 2000’s to coincide with the release of the Peter Jackson films. Re-reading these got me thinking that perhaps I could adapt these rules to give them a Punic Wars theme. This would save me money on buying yet more rule books, and would avoid adding to my already bulging book shelf. In addition – although they are twenty years old – these rules are perfectly suited for the 1:1 skirmish wargame I wanted, with each model acting as an individual. When first published these rules were hugely popular, and many wargamers will likely have copies somewhere in their collection. If not, second-hand copies can still be readily found for sale online for mere pennies.

After a little experimentation I have adapted these rules to the Punic Wars, creating a set of stat-lines for the more common troop types, followed by two scenarios based on typical skirmish actions of the period. To use these you will, of course, need a copy of any one of the following versions of TLotR:SBG. Either the Fellowship of the Ring (2001), The Two Towers (2002), or The Return of the King (2003). Each of these books contain all of the rules you require, although the latter two also include some useful FAQs and tweaks which gamers may find useful. 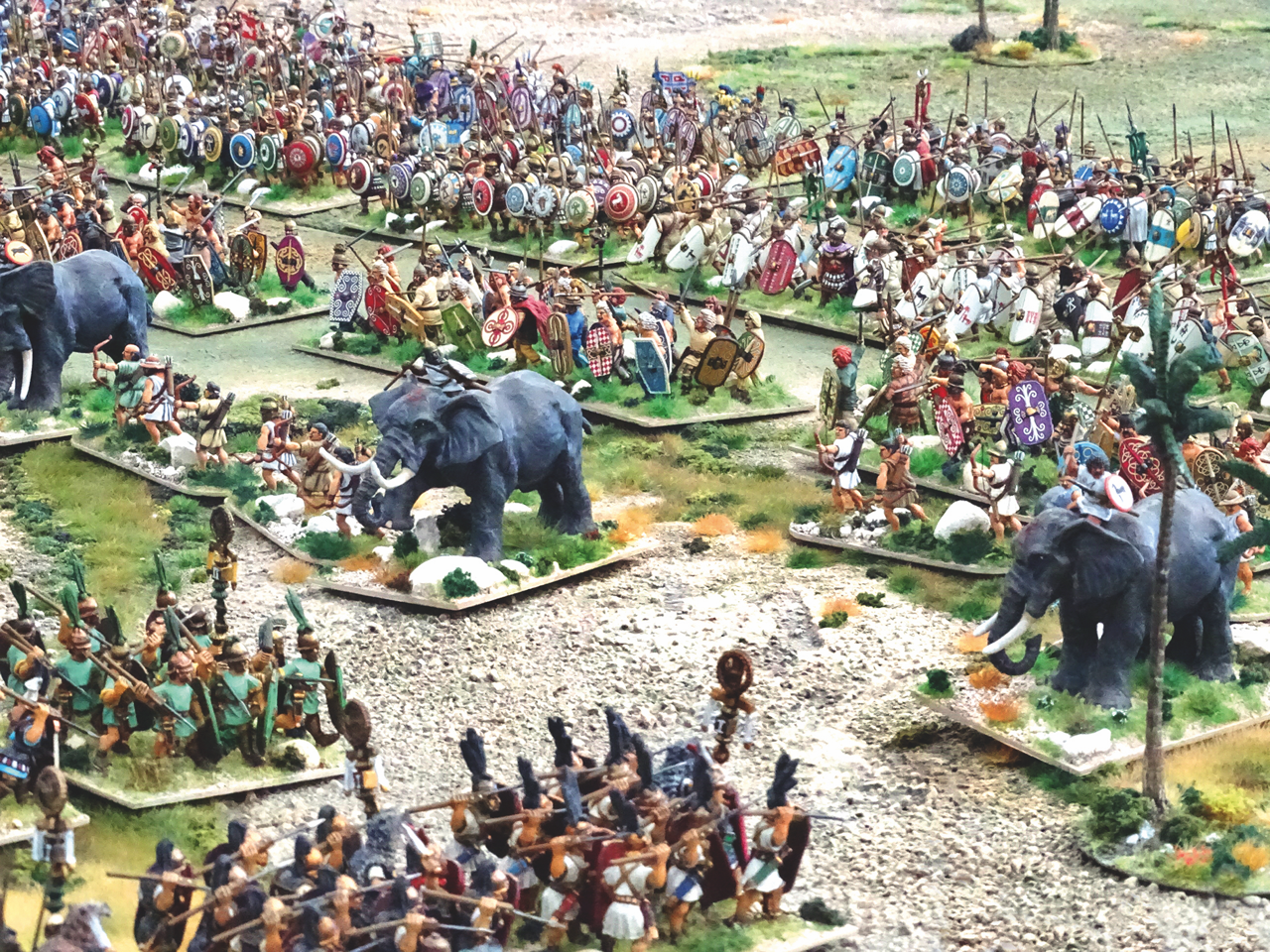 Horses have the following stat-lines:

The following special rules have been added to selected unit types to better reflect their unique abilities and traits:

THE FORCES OF THE ROMAN REPUBLIC

Special Rules: To the Triarii.

THE FORCES OF CARTHAGE

For +2 points per model Libyan/African Infantry may be upgraded to veterans. This gives them +1 courage and Heavy Armour instead of Armour.

Wargear: Elephant (!) While most skirmishes would never have involved an elephant, it seemed churlish not to give players the opportunity to field one...

Difficult to Control: Elephants were difficult prone to panic under combat conditions. At the start of its movement phase roll a D6. On a 6 the rider loses control. The elephant immediately comes under the control of the enemy player and is treated as an enemy model in all respects for the remainder of its turn (i.e., it may be charged into combat with friendly models). The effects of this last until the following turn. If the elephant has previously been wounded add +1 to the result.

Both the Romans and the Carthaginians may select any number of models from the Common Troops, Allies & Mercenaries list.

Wargear: Sword plus ONE of the following:

If equipped with short bows then they may be further upgraded to Cretan Archers for +2 points per model, giving them a shooting fight value of 3+ and a weapon strength of 3 when shooting. 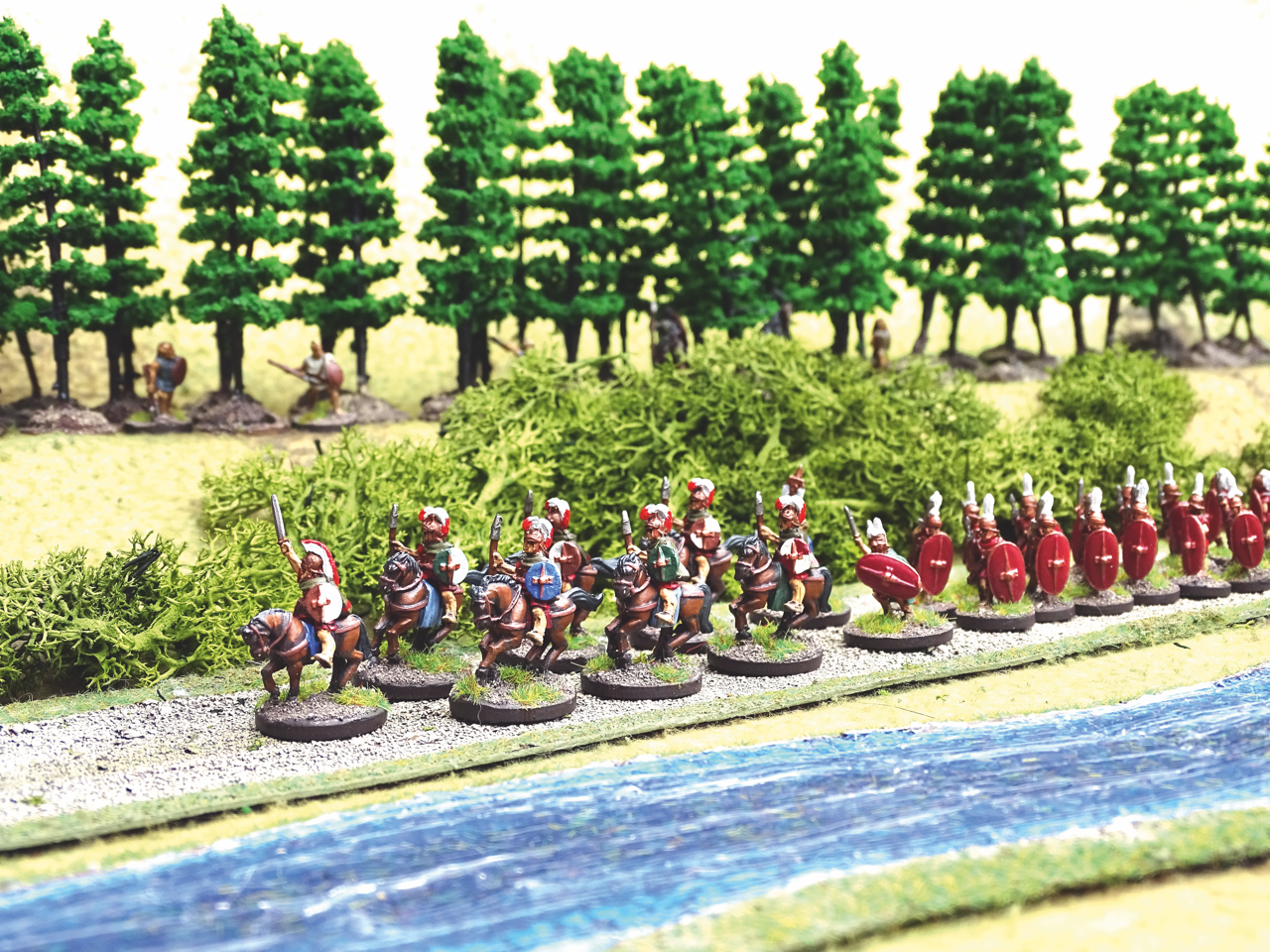 Here’s a couple of games to try out with the system.

Description: In this battle one of the major powers has decided to launch a raid against a village belonging to one of their opponent’s allies. Although it has a small garrison, they will be outnumbered until reinforcements arrive. The defenders must hold until relieved to stop their allies’ settlement from being looted, its population taken as slaves, and their homes burnt. If they fail their prestige in the eyes of their allies will be diminished, potentially leading to defections to their opponents.

Points Match: Both sides should spend equal points on their forces (400 points is recommended). However, the defender must spend at least 50% of their points on cavalry and must take two heroes. No more than 33% of either force may be equipped with bows or slings.

Layout: Three houses representing the settlement should be placed in a 15”x15” square midway along one of the long table edges (the defender’s table edge). Scatter terrain should then be placed to represent the detritus normally found in a village of the period, such as animal pens and muck heaps. The rest of the board should consist of fields or grazing land. If you significantly increase the point value of the game you may want to increase the number of buildings used as well as the victory conditions. 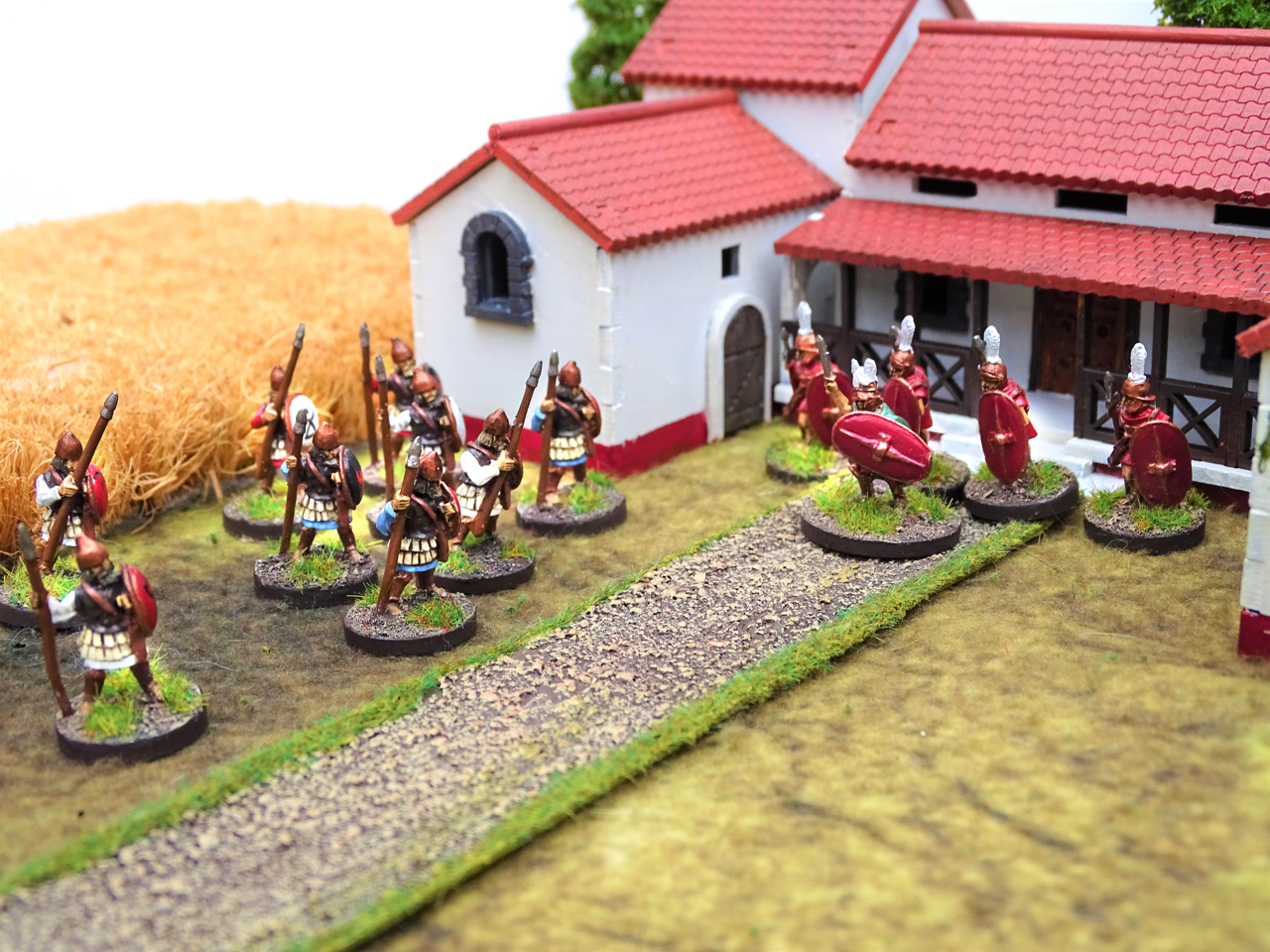 Starting Positions: The defending player divides their force in half. One half will be the garrison, the other half will be in reserve. The reserves should consist entirely of cavalry. Both forces should be given a hero to lead them.

The defending player deploys their garrison troops first. These troops must be placed within the square where the houses have been placed. The defender’s remaining troops will be put in reserve (see below). The attacking player then deploys all of their troops anywhere on the table more than 20” from an enemy model.

Reserves: The defender’s reserves will arrive together anywhere on their long table edge from turn 2 onwards. Once priority has been established the defender rolls a D6. On a 5+ their reserves arrive that turn. If they do not arrive, roll again in the following turn, adding +1 to the result. Keep doing this until the reserves arrive. Once they arrive they immediately move and act normally.

Objectives: The attacking force must burn the houses to win the game. For each attacking model that spends one turn in base-to-base contact with a house doing nothing else roll a D6. On a 6 they successfully set fire to the house. If the attacking force manages to burn at least two houses before losing >50% casualties then they win the game, otherwise the defenders win.

PRELUDE TO A PITCHED BATTLE 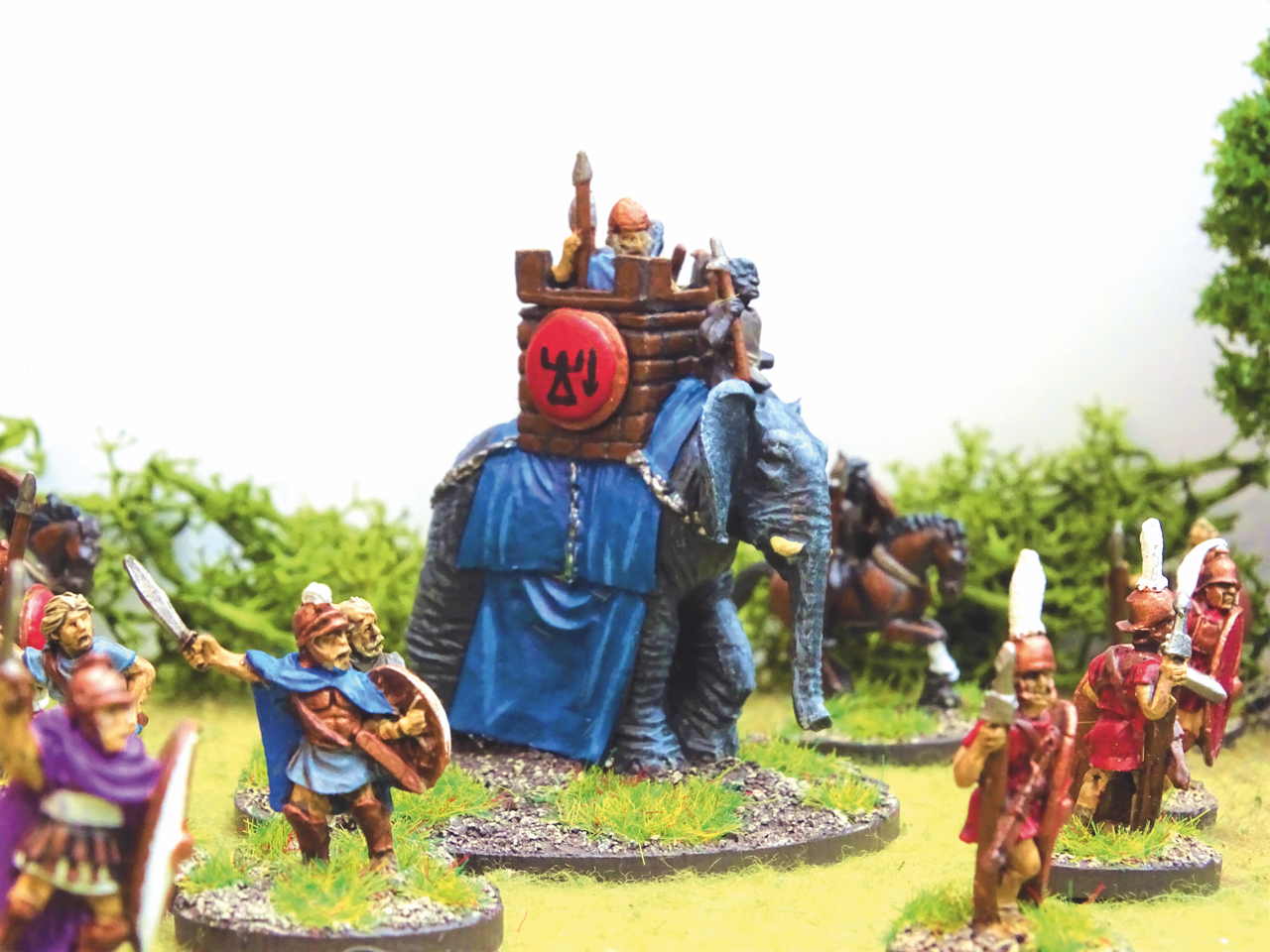 Description: This battle represents the prelude to many of the major engagements during the Punic Wars. While the main body of the two armies manoeuvre for advantage both sides have sent out small forces towards the enemy. Their objectives are to test their opponent’s resolve and endeavour to gain a tactical or psychological advantage prior to the main battle lines meeting. If one side can gain the upper-hand in these skirmishes then this could significantly influence the outcome of the coming battle, perhaps even persuading the opposing force that they should not risk a pitched battle at this time.

Points Match: Both sides should spend equal points on their forces (400-500 points is recommended). No more than 33% of either force may be equipped with bows or slings.

Layout: The battlefield terrain should be relatively open. Typically, most major ancient battles were fought on open, level areas with few significant obstacles to movement.

Starting Positions: Both sides should roll a D6, the highest choosing which side of the board they wish to deploy on. Their opponent then chooses whether to place a model on the tabletop first or second. All models are placed within 12” of the player’s chosen board edge. Alternate placing models until all the models are deployed. A player may choose to keep some models in reserve, in which case they use the reserve rules given in the “Raid” scenario above.

Objectives: The winner of the scenario is the player with the most victory points. Victory points are calculated as follows: 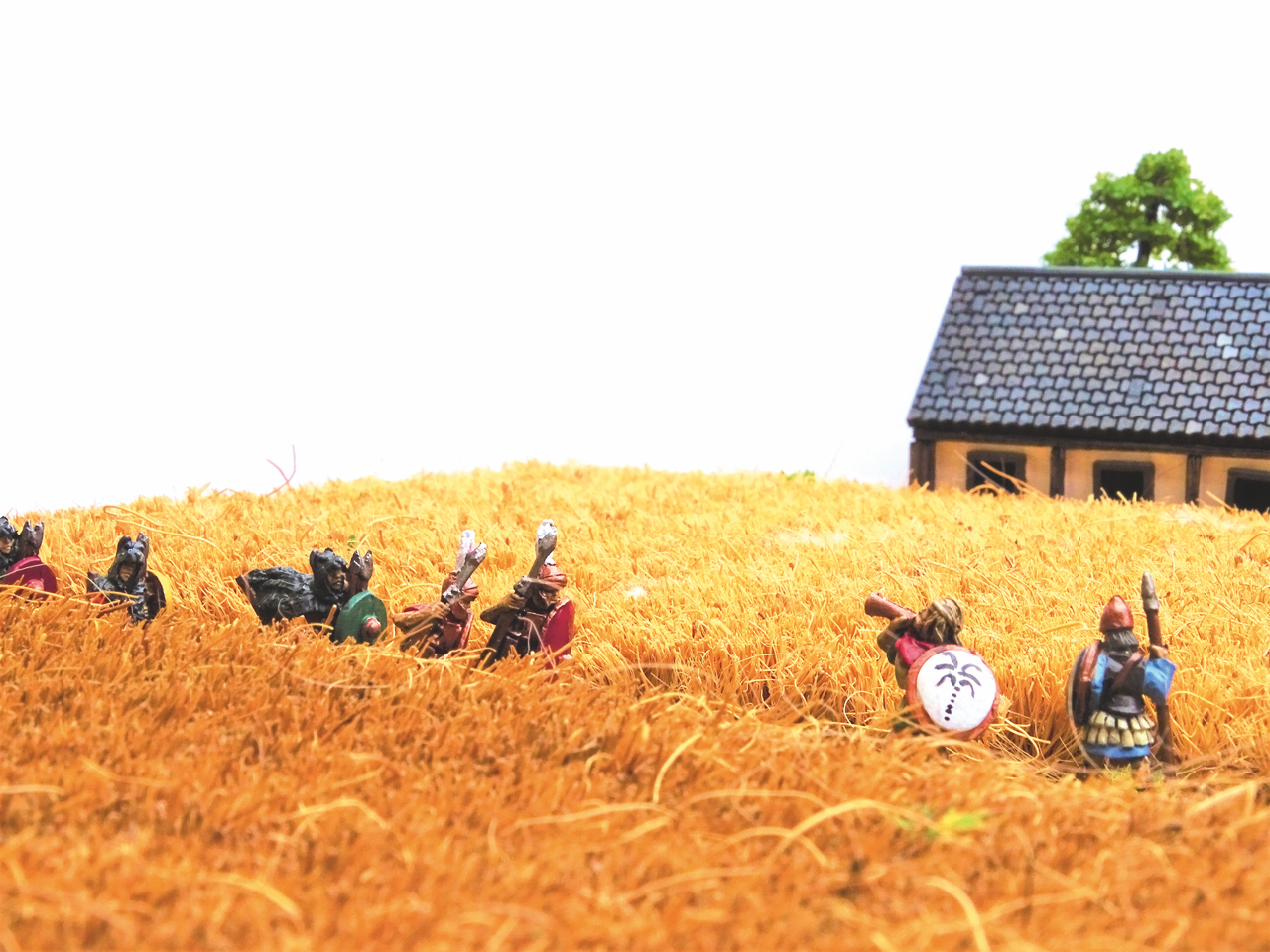 There are many sets of rules covering the Punic Wars (The Too Fat Lardies, for example, are coming out with a much anticipated supplement for Infamy, Infamy! that will cover this period). However, the intention of this article has been to demonstrate that repurposing reliable older rules is both a viable and cost-effective alternative to buying yet another new rule book. For those who are interested in Ancient warfare this article will hopefully give you some ideas as to how you could adapt these rules further for other conflicts, such as Caesar’s Gallic War or Alexander the Great’s Afghanistan campaign.