Men of Bronze: First Impressions of the Osprey Rules for Hoplite Battles 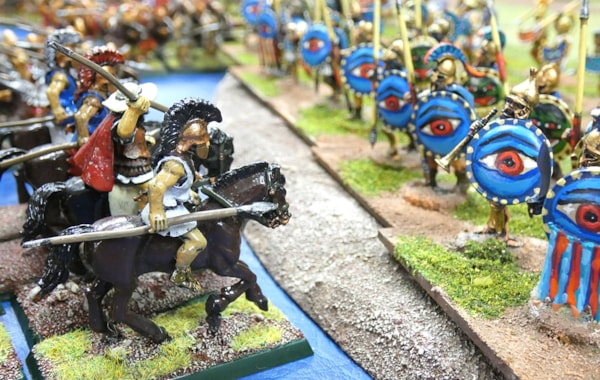 The Eyes to the Right Have it!

We recently played our first game of Men of Bronze, the latest offering from Osprey in their blue rule book series (released in April 2019 and currently £12.99. Ed.) As usual, we ordered a print copy and a further Kindle copy, so we could all have a quick scan through the rules before embarking on our first game. The game covers early Hoplite warfare, between the various City States as well as the Greco-Persian Wars. Basing and unit size is not important, so long as both sides are based in a similar manner. We based our forces on 60 mm Warbases squares with 4 figures to a base and 6 bases to a unit, which looked about right to us.

The basic driver for the rules is the use of ‘Arete points’, a set of command points, the use of which influences various parts of the game (as Dave Tuck has said to me privately, the probability is that everyone will just call these “command points”! Ed.). 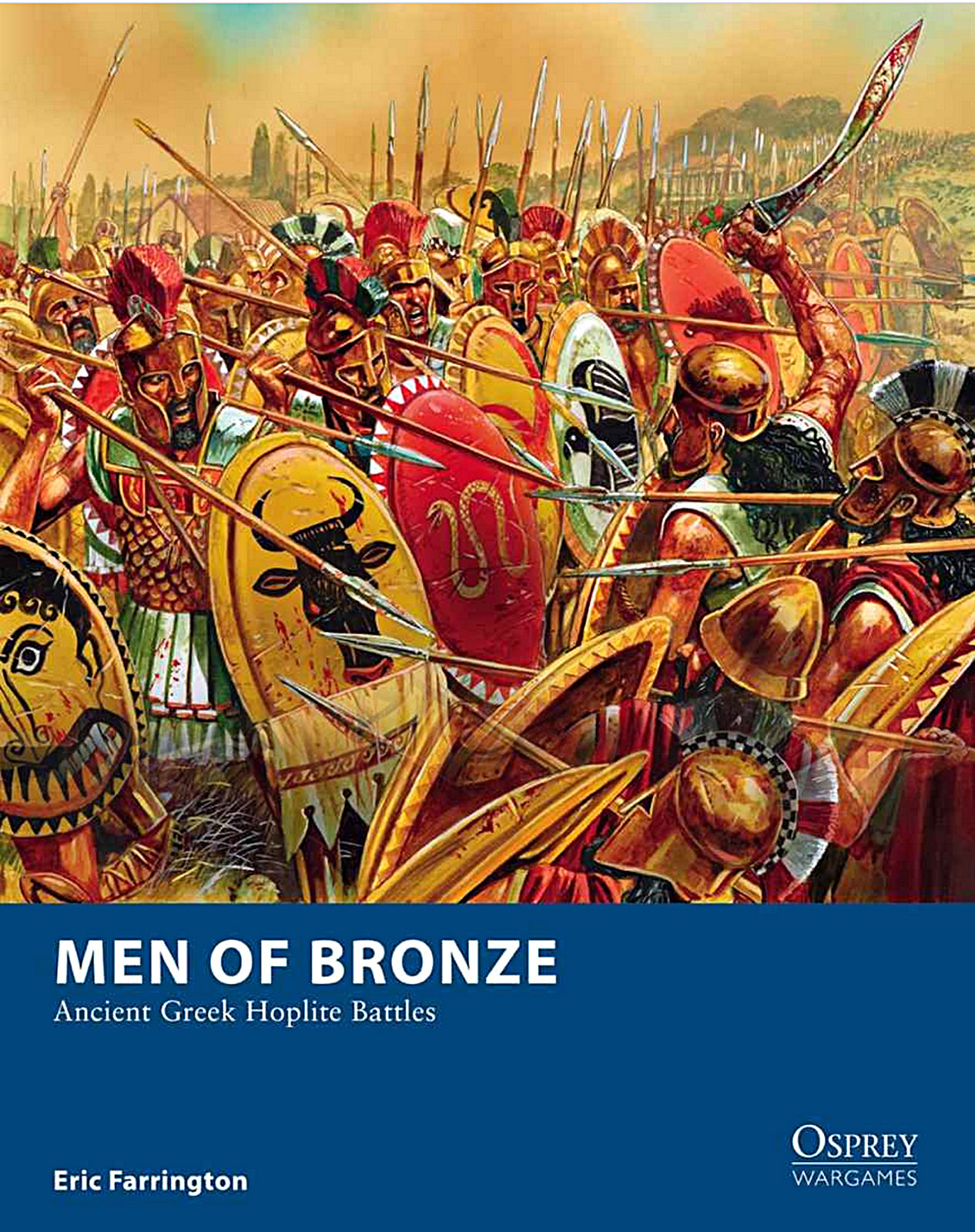 Arete points are generated at one point per unit, plus an extra one for the army commander. Each time a unit is lost the points total reduces by one, as it does if the Army Commander cops it. They are used to bid for initiative at the start of each turn, and to steal the initiative during it. They are also used to rally a wavering unit, to reroll any failed die roll, to allow a unit to charge and to use any of the special troop attributes certain units enjoy.

The side that wins the initiative activates a unit, which consists of it moving, firing or shooting. One action only per turn. Peltasts, skirmishers and cavalry can move and shoot as a special move, at the cost of an Arete point. They continue activating, unless their opponents try to steal the initiative, which costs a point, and involves winning a die roll with their opponent. This continues until all actions are carried out by both sides. Not everything costs Arete points and any points not used at the turn end are lost.

For anyone who has played Lion Rampant the firing and melee mechanisms will be reasonably familiar. All units have a firing and or fighting factor and an Armour rating. Elite Hoplites have an attack of 6 so roll six dice, with 4-6 being the normal hit requirement. Hits are then divided by the armour, with Hoplites in Phalanx having armour of 3, and each three hits reduce the unit’s Courage (hit value) by one. The same mechanism is used in firing, with different factors depending on weapon type. The score required to hit increases by one if the unit is wavering.

Each time a unit loses a courage point it takes a discipline test. This is an elegant system which leads to either a pass or the unit marked as wavering. Wavering units cannot form Phalanx They also find it harder to achieve hits in firing or melee, and are even forced to pass a test to move. A unit suffering multiple courage losses in a turn, must take multiple tests, but these are resolved very quickly. We liked the way units under pressure, could be gradually eroded. 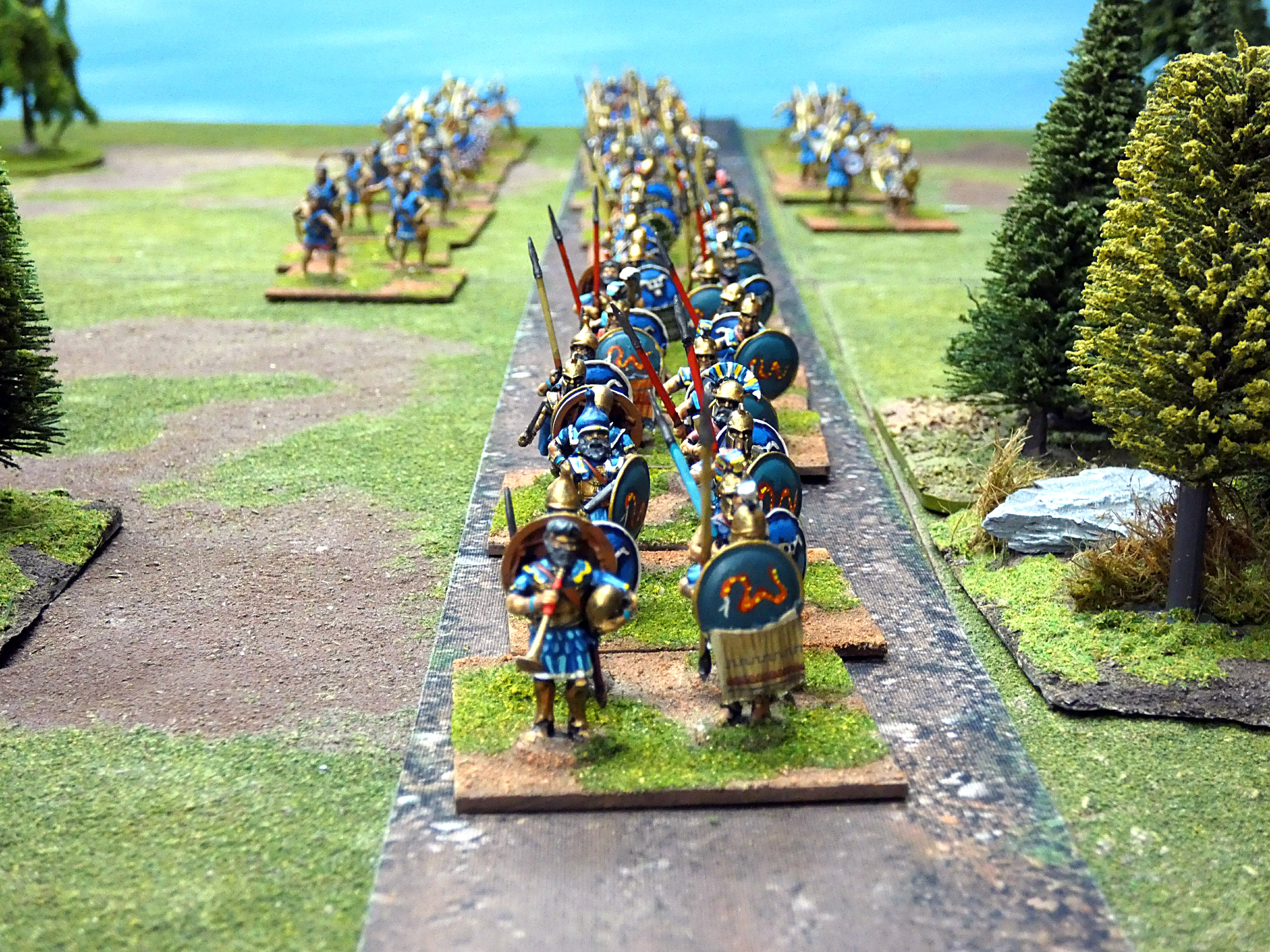 Above Image: Hoplites flanked by light troops march to battle

All units are deemed to be in open order, allowing them to move and manoeuvre quite easily. Hoplite units can form Phalanx, which gives them bonuses in melee and when shot at, but at a cost of their being a lot more static. They can also suffer from drift. This was a tendency of such units to drift to the right, as each man attempts to take shelter under his companion’s shield. Each turn a phalanx moves it must pass a discipline test (a very quick procedure) and if it fails it drifts to the right – the UKIP move, as we christened it! Another rule we enjoyed was the ring overhead rule. Units can fire over the heads of a friendly unit although this makes it harder to hit the target (needing a 5-6, rather than the usual 4-6) with any scores of one being on the friendly unit in between. Ouch!

Terrain is well thought through in the rules. It is either open, difficult, dangerous or impassable, with various penalties or restrictions for each.

Morale is reflected in the rules by units wavering and being pushed back in melee. Higher level morale kicks in when the Army Commander dies and when units witness a rout, or the army suffers multiples of 25% of the Armies points lost in the course of the game. In our game, two out of the four Commanders died during melees, which caused consternation in the ranks. 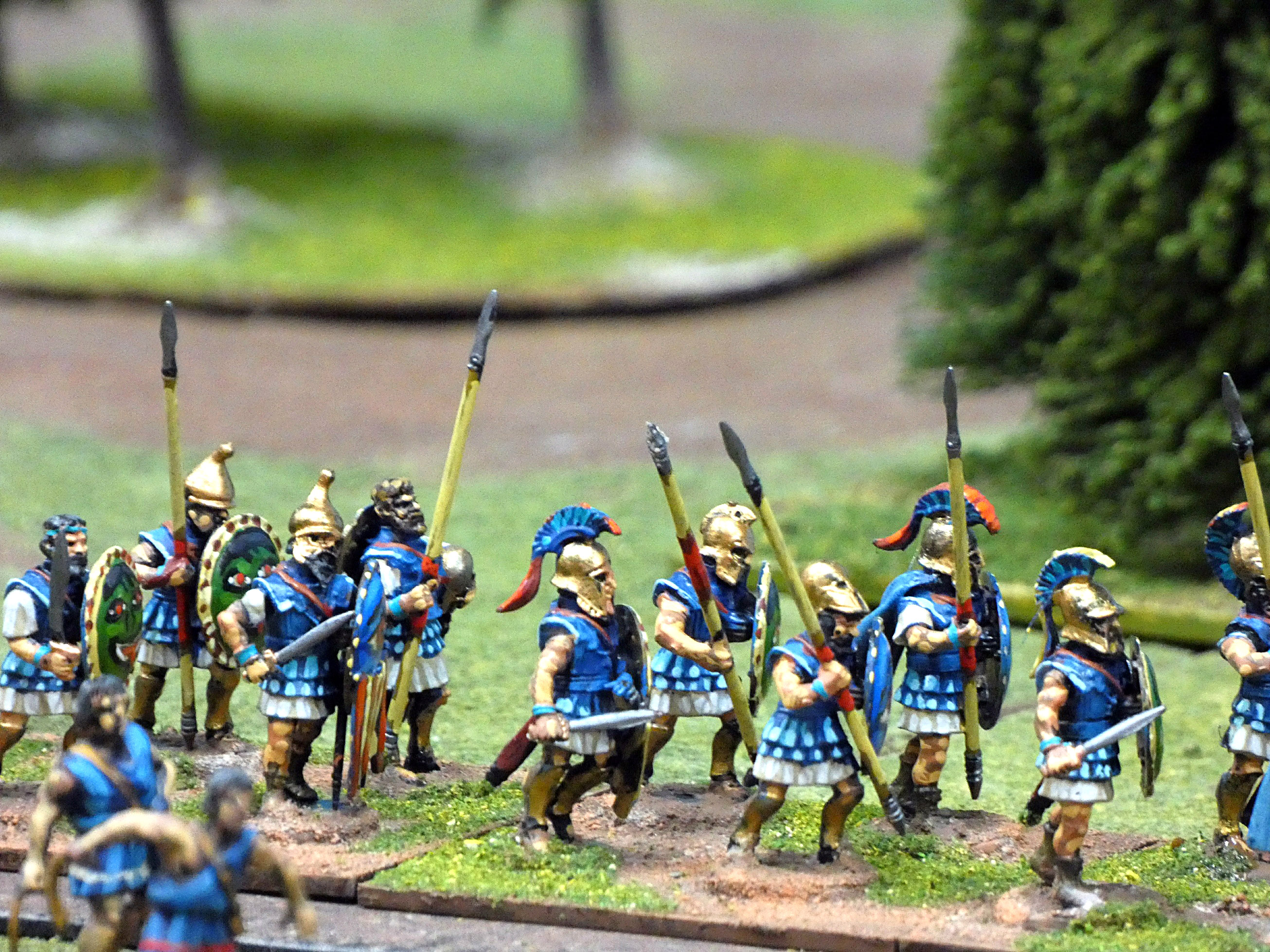 There is a detailed section of troop types with an army list for most City States, as well as Persians, Barbarian tribes and the Army of Phillip of Macedon. There are also a number of scenarios, and methods of playing Historical battles from the period, with simplistic deployment maps and force make up for each scenario.

Our game which consisted of six units of Hoplites, two units of cavalry and two units of Peltasts with a couple of Psiloi, against a force weaker in Hoplites but stronger in Peltasts and Psiloi, played very well. Each side was split into two commands, and it played well as a multi-player game, with very little down time for either side. Both sides remained engaged, due to the option to try to steal the initiative, and the fact each situation was resolved, in its entirety, as it arose. 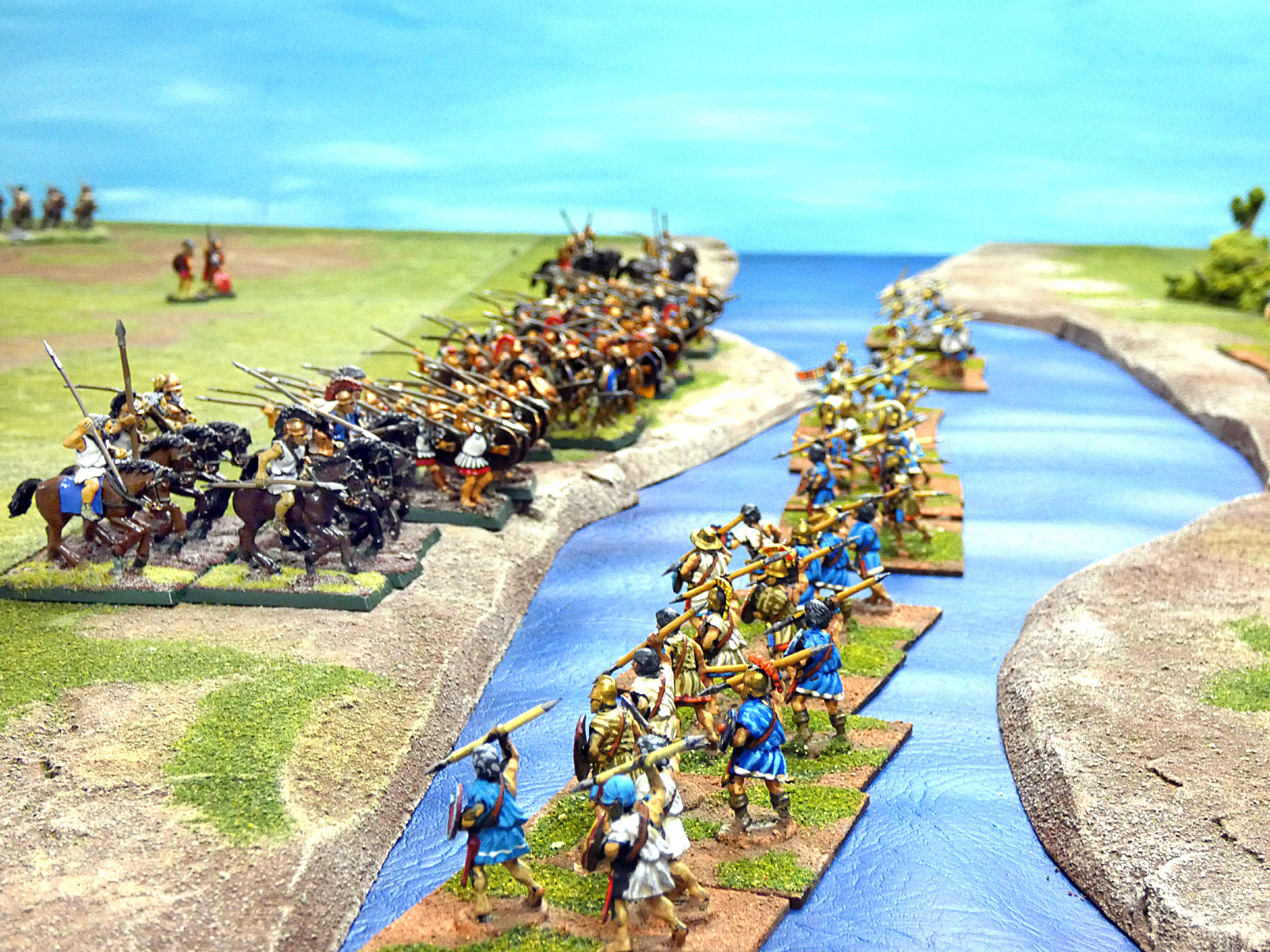 Image above: Defenders on the river bank rush up some support

So, what didn’t we like? The main thing was a lack of a play sheet. We also found some of the rules were spread over several sections of the rule book. This made it frustrating, when learning the rules, and provided the only real down time in our game. Wavering, for example, would have been dealt with easier with a heading covering that rule and its effects – and how to remove it – all in one section. Alternatively, a good index, would have achieved the same end.

We found a few oddities, but as the author points out, if you don’t like a rule, change it. This approach suits us fine, as we do it with every set of rules we use (including our own Victorian Steel set!).

The main changes we intend to make are:

»          For Psiloi, cavalry and Peltasts – which benefit from the move and shoot rule –to allow units using that rule to move and shoot or shoot and move.

»          To change the bidding system for initiative at the outset to be as follows:

None of the changes we are implementing are earth shattering, and we were pleased we invested in Mr Farrington’s rule set, which is nicely produced by Osprey.

For us, these rules could not have come at a better time for our group. Two Hoplite armies have recently arrived at the Victorian Outpost, and Mark Pemberton, as ever, surprised us when arriving with a huge Republican Roman army, all painted and based. It now only remains for us to adapt the rules to cover the big battles our group like best. But that is for another day...

Our group enjoyed playing these rules and think they will form the basis of our rules of choice for Hoplite warfare. We also think they have potential as the basis for a set of Anglo Danish dark ages rules in the future. 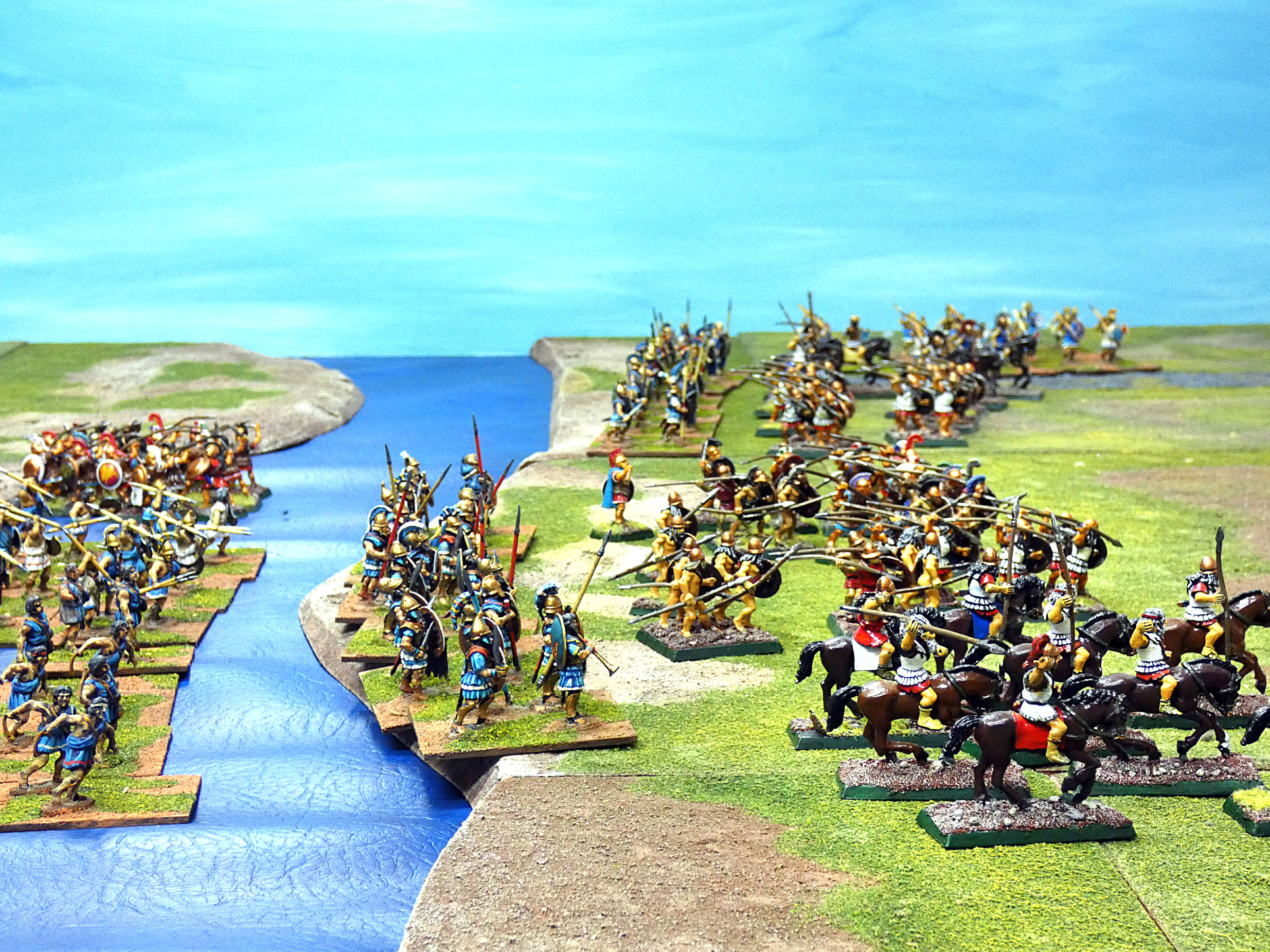 Image above: To the victor, the spoils!

This review originally appeared in Issue 436 of Miniature Wargames  . Pick up the latest issue in print or digital here or subscribe to make sure you never miss another issue