Meet the epic board game three decades in the making Nicola Iannone has been working on his tabletop debut for two-thirds of his life. As Medioevo Universalis prepares to finally release in 2017, the first-time designer looks back on the culmination of 29 years

From the rise of the internet to countless political turmoils, today's world is undoubtedly a very different place to the world of 1988. For all the change, however, one thing has remained the same: the lifelong aspiration of a tabletop devotee to get his dream board game made.

In 1988, then-16-year-old Nicola Iannone and his friends decided – as many teenagers have done before and since – to create their own board game.

Iannone had previously dabbled in writing his own titles inspired by fantasy books and RPGs such as Dungeons & Dragons a few years before, and took a similar approach to the ambitious project, pulling in mechanic and thematic aspects of his favourite influences.

“In 1988, after hundreds of games of Risk, Monopoly and Marco Polo, we created the first version of Medioevo Universalis, then baptised Mesciòt – which means ‘mix’ in my dialect – in reference to the fact that we used many parts of other board games: a map from Marco Polo, panzers from Risk and money from Monopoly."

For many teens, such an idea would’ve been a passing distraction quickly lost to the next grand scheme and later dismissed as an unrealistic adolescent pipe dream. Iannone, meanwhile, stuck at the design for the next decade.

“The 1988 to 1998 period was one of free creation and testing of mechanics of all types,” he recalls. “The rule for us was fun and invention.”

As any former teenager can attest, tastes can change drastically in the transition to adulthood. It was no different for Iannone, who quickly assimilated his newfound interests into the evolving side project.

“As my collection of games increased – Civilization, Shogun, Serenissima, Age of Renaissance and so on – we borrowed components from those games, and found a way to improve Mesciòt, by adding new rules and giving new meaning to the decks of cards that we added, step-by-step,” he explains.

“Later, I must admit, PC games provided a remarkable help, not only for ideas but also for the material: an inexhaustible source of images, backgrounds, icons and tables. Those things allowed me in 1999 to obtain the economic and technological know-how, and to start thinking seriously about a version of the game made to fit.” 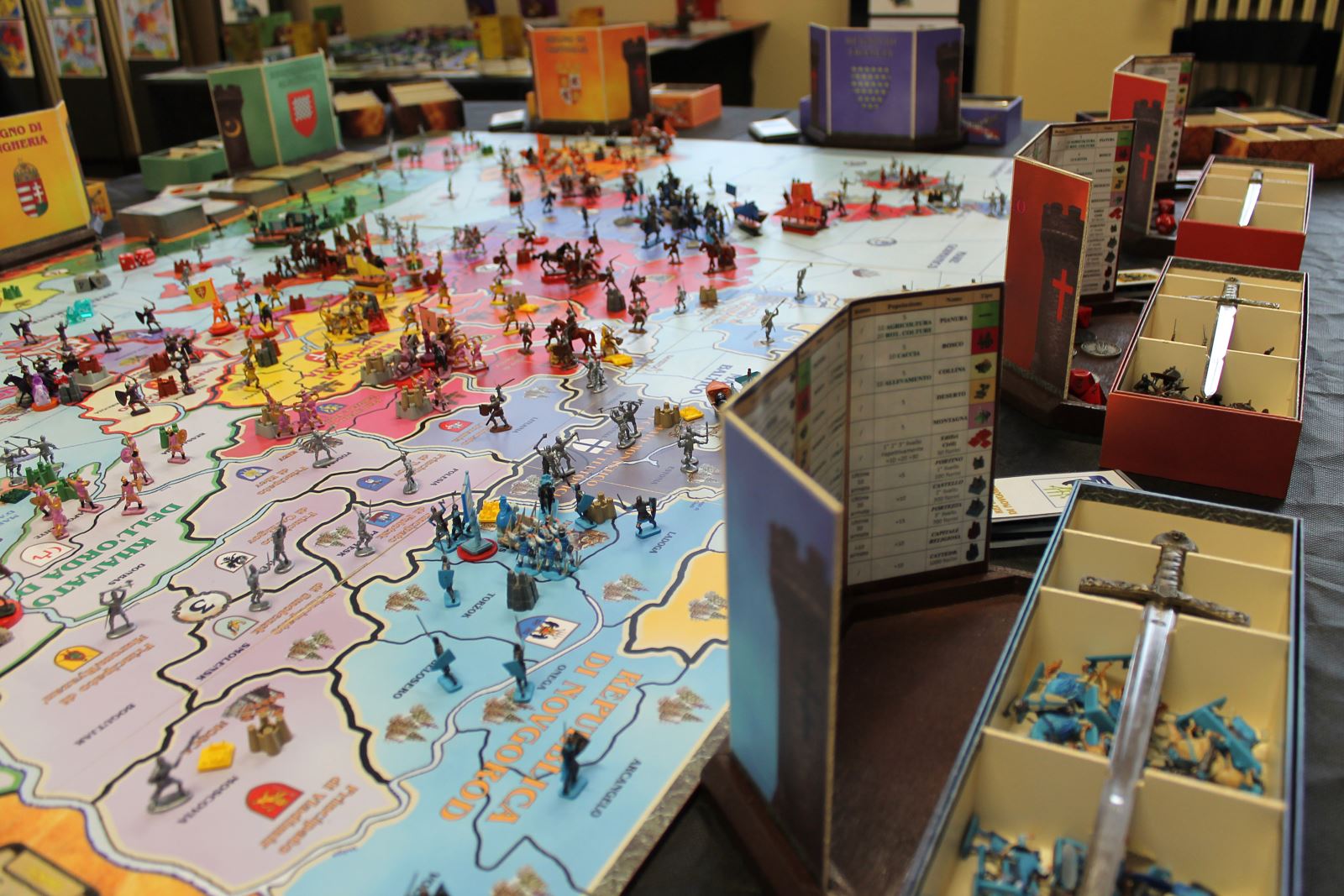 The new opportunity provided by technology led Iannone to try and turn the countless concepts and ideas he had held in his head for over ten years into a working design.

“1999 was a long year for this board game,” he says. “It was the year that I created the core of all the game mechanics; I took a squared notebook and started to write all the rules and text for the cards.

“In one year of work, I created the new game, from the rules to the production. Treasuring all the experiences and playtests, I collected all of the available information in a notebook, and then started the long process of analysis and synthesis in order to define the core mechanics of the game – still almost unchanged – and a large number of combos.”

Although the first version of Medioevo Universalis lacked the 13th-century framing of its final form, the gameplay was solid enough to start slowly chiselling into a polished refinement. Helped by a group of friends he had established while progressing his rowing hobby, Iannone tested and tweaked the 1999 edition almost every weekend for five years. One major issue continued to stand out.

“The playing time for the 1999 version was very long, there was no real goal and we played for the pleasure of playing, preparing the next attack and counterattacking for the hits suffered,” he explains. “After many improvements, we can now have a victor in just after two hours; however, a good game is normally around three to four hours.”

Despite Iannone’s efforts to trim down the game, Medioevo Universalis’ finished release remains a weighty beast. The box comes loaded with more than 1,600 components, including 1,000 miniatures and a 3.4-by-2.5-foot central map board. It may seem overwhelming, but its designer insists the game’s lengthy gestation period has resulted in a svelte, accessible core.

“I worked a lot on ergonomics and the final layout of all the individual parts, trying to facilitate the learning of the game simply by referring to the components, almost completely cancelling the need for the rulebook,” Iannone asserts. “The game has very simple rules that are intertwined: my goal was always to have a complex game and not a complicated one; over the years I have continued to remove minor rules that previously seemed essential to me, but which I found later were not.

“Time was my best friend for all of these changes, because it allowed me to study various aspects of the game over time in different contexts, in order to find the best solution. In addition, time allowed me to gradually digest the evolution of the prototypes, without remorse for the choices I made.”

"The 1999 version definitely had a remarkable visual impact in terms of size and parts, although it was commercially impractical."

Having nearly perfected the design of his magnum opus by the end of 2004, Iannone stashed the game away for almost three years, bringing it out only for rare appearances.

When Medioevo Universalis re-emerged in mid-2007, it faced a completely new challenge; how would a hardcore strategy title of such an ambitious scale justify the production investment required by a publisher?

“In July 2007, driven by the encouragement from my friends, I began seeking publication of the game, posting my creation on [Italian gaming forums] Tana dei Goblin and IDEAG: people liked my ideas a lot!” Iannone recounts.

"Encouraged, I showed the game to the public in September at ModCon 2007, just as it was in 1999. That version definitely had a remarkable visual impact in terms of size and parts, although it was commercially impractical."

Spurred by the reception of Medioevo Universalis among players and determined to attract a publisher, Iannone began to tour the tabletop circuit, slowly whittling his title down to a feasible scale while retaining the core of its epic ambitions.

“I started to participate in other gaming conventions, listening to and assimilating every comment and advice that people gave me, from medieval historians and gamers to professionals,” he says. “All of this information led to a slow but relentless restyling of the game and rules; I worked hard to make the prototype as complete and definitive as possible.”

Among the major modifications was the switch from a fantasy backdrop to a historical setting. This required Iannone to discover a time period befitting the sheer breadth of the game, which can be expanded to support up to as many as nine players.

“2007 was the year of change,” he observes. “Change from a map not historic and very fantastic to the choice of a historical period in which to set my prototype – but it wasn’t so easy. I was very attracted by the Napoleonic period; in the end, I chose the second half of the 13th century.

“I didn’t want to give up the large number of players. So in late 2007 I changed the map. The previous map was bigger, reaching up to the borders of India to the east and the Gulf of Guinea to the south." 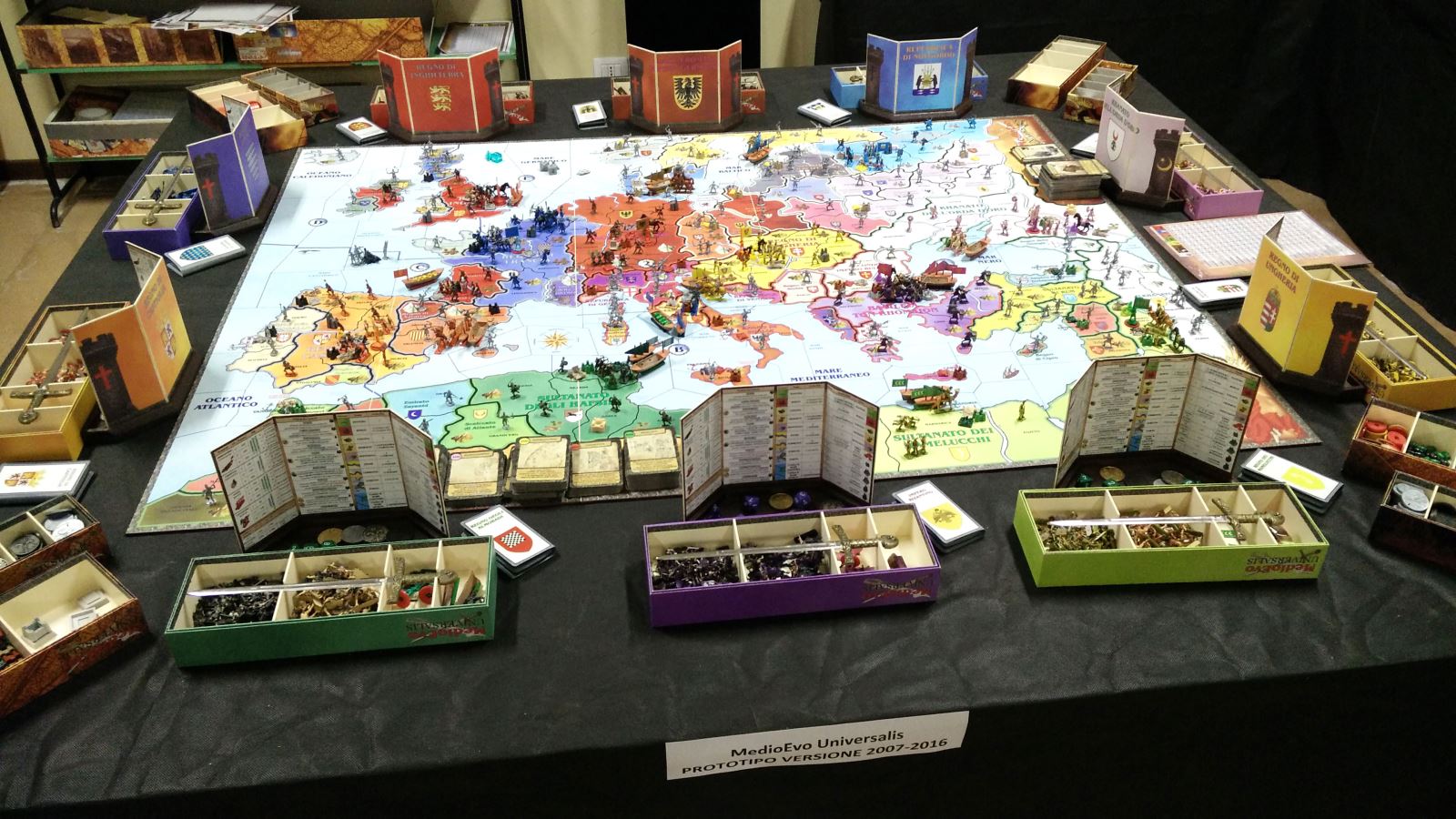 Adopting a historical framework had a knock-on effect, forcing the designer to adapt his streamlined mechanics to reflect the real-world aspects of the time.

“A big problem was to make the mechanics historically-based, that is, to give them a purpose that made sense and reflected the historical period,” Iannone elaborates. “This was a continuing endeavour that required me to read several books and to do a lot of online research. The most time-consuming research involved the boundaries of kingdoms, the heraldry and trade – these were remade several times in several years, when I had the time and, most of all, desire to do so.”

The greatest task still remained: painstakingly condensing the game’s scale, a crucial requirement made even more difficult by the overhauled theme and mechanics.

“I had to reduce the size of the game because, due to its given size, the production was not possible,” Iannone says. “The map had to be rebuilt five times in the last seven years, both to correct historical errors and to find a way to be able to divide it into several parts, so as to create a base game for three to five players.”

Applying this new historical theme, renovating the in-game components and balancing the adjusted rules took close to another decade, finally reaching completion in 2016. It happened to be a fortuitous delay – in that time, crowdfunding had emerged and begun to prove its worth as a way of designers drumming up support and financial backing for otherwise non-viable projects.

“The crowdfunding system allows you to produce games that otherwise, for one reason or another, would never be produced by a conventional publisher – [that might have] too much risk because they aren’t board games for everyone,” Iannone enthuses.

Iannone joined forces with Italian label Giochix.it to bring Medioevo Universalis to Kickstarter at the start of 2017, eventually attracting more than eight times its starting €20,000 (£17,000) target – an impressive total given the hefty €219 (£187) price tag of the standard box.

The game’s planned release in December will mark the culmination of almost two-thirds of Iannone’s life. Yet, despite the extraordinary evolution of the designer and his creation during the last 29 years, he insists that the journey has always been more important than its end.

“This is the first board game I have ever published,” Iannone reflects. “I created other games, but I've never completely finished them – and they are not smaller than this.

“However, publishing this board game has never been my priority; I was interested above all to create a game as I had always wanted and play with my friends.”