John Pickavance is the current champion of Keyforge’s UK Vaults Tour. Having rocked up with his twin brother, part of his birthday gift to his twin, he experienced a day of competitive play which he was “never so streaky in my life.”

The event was a sealed deck event, with all new Archons decks unwrapped and played for the first time. Of course, twins choosing Keyforge, a game most notable for its entirely unique decks, as their game of choice is a joke that tells itself. Despite being the giver of the gift, it was John who advanced to the final and his eventual win.

For Pickavance the win isn’t the story. Instead, the atmosphere of the new game, and the expansions released on the day lead to a huge friendly group which has become part of his Keyforge community. Watching people understand that while it is a competitive envrionment, it was possible to have fun and make friends. “This isn’t a scary thing. This is something anyone could do,” says Pickavance of the scene on the day. This fits with how players term the Vaults Tour as ‘competitive casual’. This is mixed with what some see as a high level of randomness and luck in the game, “It seems hard to game at a super competitive level,” says Pickavance “as you’ll never have a perfect deck.” Keyforge has a competitive scene of contradictions – and yet, it flourishes. 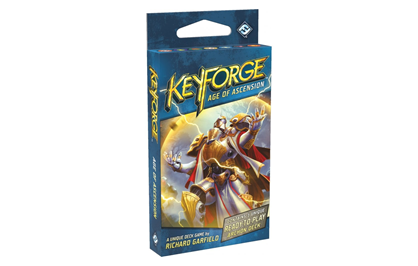 Luck of the draw

“You’re always dealing with this kind of randomness. That’s not say it’s random,” says Pickavance. In Keyforge, unlike other card games, luck is baked into the game at a high level. Buying a pack gives you all the randomness you need, and as such, the competitive scene doesn’t feign that the game is entirely intentional.
“It invites more skilful play in Keyforge,” says Pickavance “a good player will be able to make their suboptimal cards work for them. A less experienced player might think ‘this card's rubbish. It ruins my deck,’ but there were lines of play in certain situations where it could become a really important card to have. And you don’t see that in any other card game because those cards just aren’t drafted”
So, with deckbuilding removed, a different kind of skill emerges in competitive play – deck reading.  “In a game like Hearthstone or Magic where there's a very fixed meta, you'll have played all the decks hundreds of times before and you know what you're waiting for,” says Pickavance “whereas in Keyforge you have to be able to look at your opponent's deck list and see the lines of play. There’s a very high skill ceiling.”

Putting Your Aember Where Your Mouth Is

Pickavance hadn’t played in a competitive scene before, but the Vaults Tour was a great place to start. The tour allows grassroots gamers to come together and play for non-cash prizes. It’s the sensible climax of the store-based Chainbound events.
But that’s about to undergo a subtle change with a new addition to the sprawling set of competitive events. Fantasy Flight have, for the first time, decided to put a cash prize up for the winner of a new tournament. The Vault Warrior series, kicking off in March, should see competitors work their way up through open qualifiers for a prize of $10,000 distributed between the top 16 – the winner taking away $2500. The final will have a prize of $100,000 in Miami – and even at this point there’s a last chance qualifier to get in.
“It's the right balance of aspirational without being a huge amount of money off the bat,” says Alex Watkins, head of competitive play at Fantasy Flight. Getting this right is difficult as money always changes the way the game is played and watched. It can even lead to some of the harsher trends seen in other competitive card games.

Making of the Meta out of a molehill

What then, does Keyforge do to keep its meta fresh? And more simply, can a meta even exist within the randomised deck building game?
‘Meta’ is a term used in competitive card games to describe the overarching trend at any given moment. This could be the type of deck or the style of play – the meta will effect everything and is often self-fulfilling. With the rise of communities around these games there is always a discussion about the best way to win, and to win is to play into the meta for most people. In deck-building card games you’ll often find a few cards that will consistently produce a win conditions, so having these in your deck will improve your chances. Ultimately though, it’s not very fun to be pushing against a very aggressive or formulaic meta, and it’s even less fun to join it.

Keyforge also has its own system for keeping powerful decks from ruining everyone’s fun. The Chainbound events add ‘chains’ to decks for winning in competitive play. This reduces the hand size the deck draws which, in effect, chokes it during later games. Eventually a deck will become somewhat unplayable, and be naturally rotated out by player choice. This is the intentional part of the meta, and part of the enjoyment of the game when playing competitively – the fact that your deck, while unique, might also have a limited competitive life if it breaks the game. Your wins will go on to effect how you play the game in the future and, if it’s a deck that stomps everyone else’s your free ride will only last so long. Additionally, a newly introduced ‘power level’ will push decks up only into higher tier competitions when they hit certain thresholds.

There is still a meta to push against in Keyforge however. That of a race. Often games, and the Vaults Tour winning deck played by Pickavance, don’t involve as much combat as other card games. The metaphor for most card games is that you, the holder of the cards, is fielding an army. Here it’s less combative. Instead minions are traditionally seen for their value in producing game winning resources.

“There’s this idea that you have to race,” says Pickavance, talking about a recent local chainbound tournament victory, “however, I've got this deck that kind of plays against that completely,”. Instead of creating minions to generate the aember required to forge each of the keys to win the game, the deck relies on your opponent doing so, and then stealing it from them using archived cards (a kind of storage system for cards to use later). “It like a suckerpunch,” says Pickavance “and what he didn’t realise that had he not been creating so much aember, I wouldn’t have been able to win.” This is an example of the way that a smart player can read their deck and find the advantages within it. The meta in Keyforge is as complex, even if not as fully analysed as other card games. 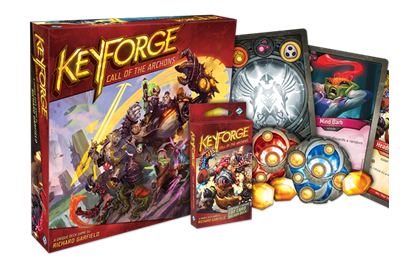 The Decks of Keyforge, a community run site, does attempt something like deck ranking. But the system is somewhat arbitrary and doesn’t account for everything that a human can see in the game. Pickavance explains that his winning decks are both rated low using the site, how the site may be leading players toward certain conclusions about how the game should be played.

“Everyone wants to know, ‘have I got a world beating deck?’” says Pickavance, “and for the longest time there was this kind of rush meta. You just want to get as much aember as you can. So, cards with lots of aember on them that you just play it out of hand were rated very highly. And because they rate highly people with typing them into SAS and like, Oh, that's my best deck. It becomes this kind of self-fulfilling prophecy.” It’s easy then to get swept up as a new player on the scene, searching for your most powerful deck, but this is counter to some of the appeal of Keyforge. “The best thing about the game is, is discovering” says Pickavance, commenting that in other games you might have powerful and sought after ‘chase’ cards, “but in Keyforge you've got these ‘chase’ decks, but no one really knows what they are.”

This element of discovery is what brings people to the scene, and the community is what makes them stay. And of course, part of that is how we watch the game.

Watching Keyforge
Keyforge, like most other card games, now has a streaming component to its community. While Fantasy Flight also offer a handful events as part of their official coverage, it’s the community that takes the lead. “If we can't stream ourselves, we reach out to the communities,” says Alex Watkins “We look to provide an area on internet to make sure they can do it and encourage the community to come and stream.” And this is to everyone’s benefit “If you have the community during it and you have the people who are generally passionate about the game, you get a more authentic and a more genuine experience and what's going on,” says Watkins. Interestingly, much like the rest of the game, things are done with a community focus, with streams letting viewers get close to the way the competitors are playing. “One of the things people have really lent towards,” says Watkins, “is instead of having commentators, they like table mikes and hearing the players interactions and talking through what they're doing.”

So, with a huge and supporting community in tow, we have to ask what’s next for Keyforge on the competitive scene? “We are planning a sealed Vaults Tour at UK Games Expo,” says Watkins, hinting that a new expansion may be landing in May – this being the format of previous set releases. Stores will also be putting together seats for the Worlds Collide championships, and aside from this in February and March the leader board cycle, making it a perfect time to get in to a store and start winning your aember.