Jaws of Victory: Talking Jaws of the Lion with Isaac Childres What do we know about Gloomhaven? It’s at the top of the BoardGameGeek list, it was a posterchild of huge Kickstarter success, and it is a very large game indeed. Weighing in at just shy of 10kg, it’s not the kind of game you slip into your pocket to take to the pub. While Isaac Childres’ palate cleanser between that game and the equally large Frosthaven, isn’t quite pub-ready either at 2.9kg, Gloomhaven: Jaws of the Lion is certainly a reduced scope. We talk to Isaac Childres about the game, its reception, and get some tips for first time adventurers.

While other games in the series revel in their extensive worldbuilding, this outing is one that is delightfully contained. With maps laid out in a ring-bound book that explain the scenario – which you then play directly on – the experience of Gloomhaven has been streamlined.

To us, this appeal is very obvious. Make the game something very fast to set up, and we can squeeze in a few more adventures around our busy lives.

“Yeah, that’s pretty much it exactly,” says Childres when we suggest this goal, “if you have heard of Gloomhaven and are interested in seeing what it’s all about, but are intimidated by the giant box, the large price tag, the extensive rule book, and the long setup time, then this is a great place to start.”

“It is still the same gameplay, but we’ve removed all those barriers of entry that keep people from enjoying it,” he continues. The core loop remains unchanged for the most part. Spend your personal deck of cards, two at a time on your turn, to navigate around a dungeon-like environment – occasionally stopping to pick up loot, give a cultist a kicking, or zap someone with a spell. You play the top part of one card, the bottom part of the other without telling your teammates, and hope the plan kind of comes together.

There’s still lovely character minis in the box, and the Christmassy feeling of opening up little boxes inside the bigger box to reveal who you’re taking on an adventure next remains. It’s really a case of everything you thought you might like about Gloomhaven, but fun sized.

“I think there was a real desire from a lot of people in the community to try out Gloomhaven without having to commit to the giant box, so Jaws of the Lion has been perfect for them,” says Childres, “I think it has brought in a lot of new people.”

What adventures will people opening this box on Christmas day be taking part in?

“As members of the illustrious mercenary group, the Jaws of the Lion, players start the campaign by investigating a series of disappearances in the city,” explains Childres, “this quickly spirals into blood cults, research experiments gone wrong, and living bombs, so players should be prepared for anything.” 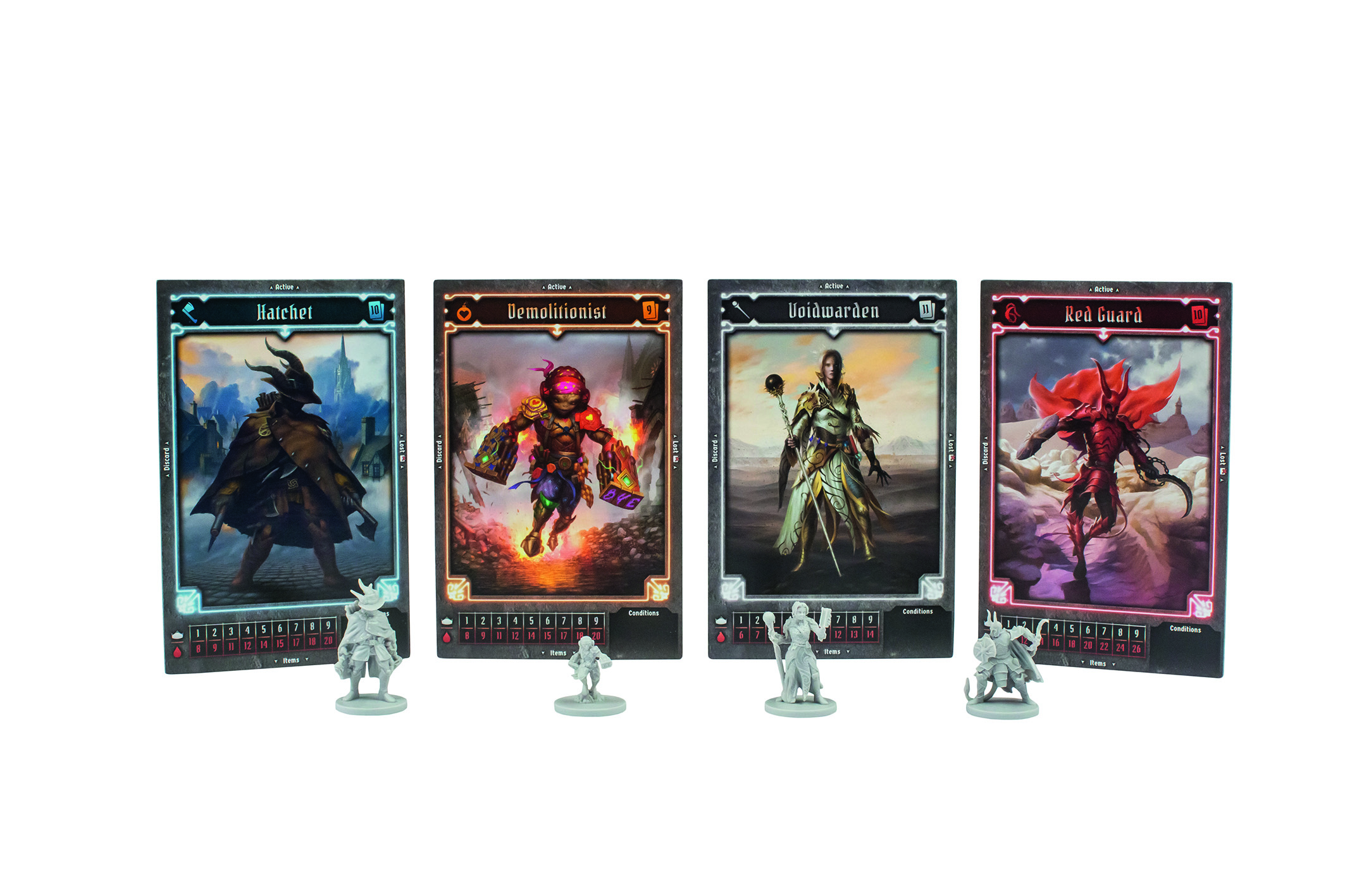 You know, the usual blood cults kidnapping people trope. As the main antagonists of the game however, you’ve got a whole menagerie of baddies to wade through.

“This blood cult is going to throw a lot of weird stuff at you: zealots, blood imps, and a number of terrifying bosses,” says Childres, “and then you’ll encounter some more standard bad guys within the city and sewers: undead, vermlings, snakes, and such.”

Monsters aside, there’s replayability here in a way that wasn’t integral to the legacy nature of Gloomhaven.  It has tension in its design through the contained scope of the game, which still lets players choose their own path through the world.

“I wanted to keep the adventure contained to a single cycle of characters, meaning you would just play one character from level one to level nine, and there would be no retirement,” says Childres. Retirement in previous outings was when a character would reach its natural end-point in an adventure, and become more like an NPC in the world.

“I wanted to keep the number of scenarios to 20-25, but there is only so much branching of story or side scenarios you can throw in and keep it to that count, but I did what I could,” says Childres of the struggles to reign in the game “eight of the 25 scenarios are side scenarios, and the main story branches at two separate points to give you some sense of agency on how things are resolved.”

Another feature to help new players along, aside from the previously mentioned ‘scenario map in a book’, is the Learn to Play Guide.

“I think the most effort went into really refining the Learn to Play Guide, which players will use to learn the game bit-by-bit over the first five scenarios,” says Childres, “that took a lot of work and a lot of playtesting to get right, but we’ve gotten a ton of great feedback about it, basically turning a complicated system like Gloomhaven into something anyone can pick up and play.” And what tips can he offer for those new players?

“The first couple of scenarios are very easy, but scenario three is going to teach you the most important lesson in Gloomhaven – avoiding damage is more important than anything else. Players will have a rough time with it until they learn to look at what the monsters are doing each round and react to it, making sure they minimize the number of attacks monsters will be able to perform through careful positioning.” 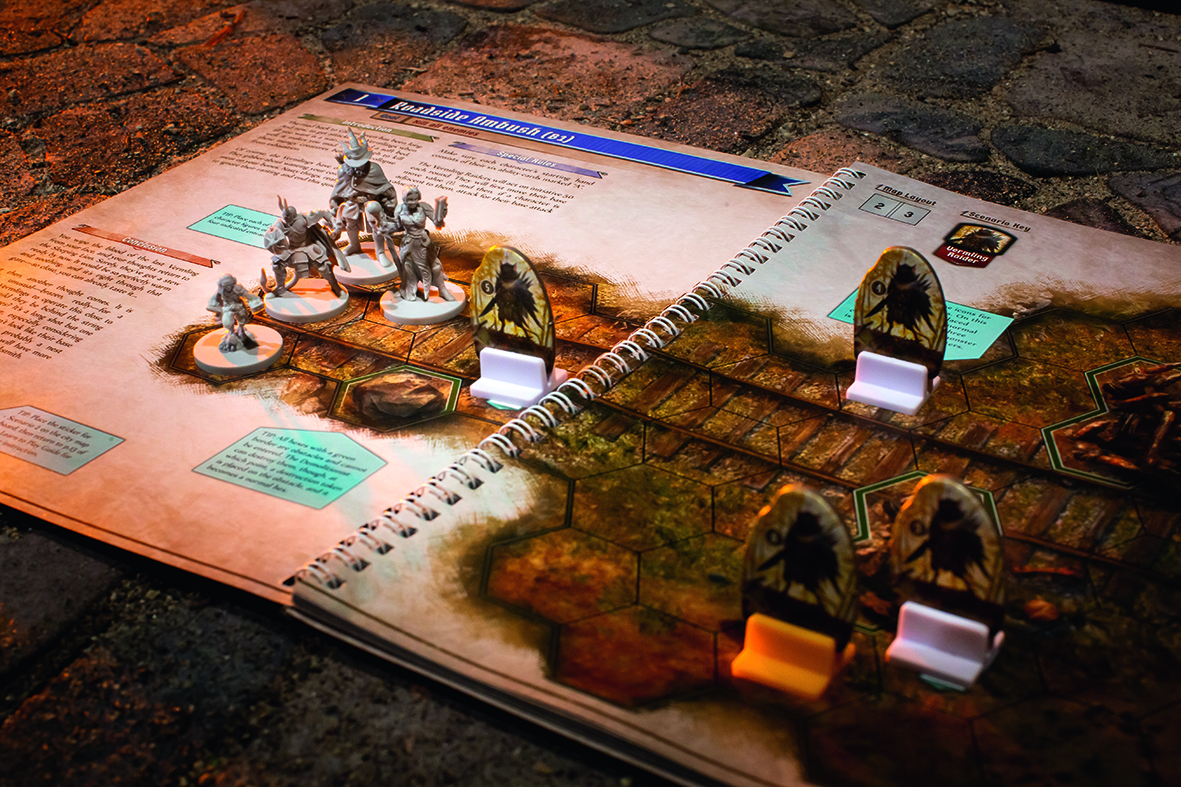 Last time we spoke to Isaac, back in issue 40, we were still joking about the ‘subtitle’ announcement – an interesting quirk of waiting for a retailer to sign off on the naming of the game as friendly enough for the store. Does he still hear anyone refer to the game using that name? “Thankfully, no,” says Childres, laughing, “that has run its course, I think.”

Where does Childres go after the success of Jaws of the Lion, which currently sits 14 places behind its older sibling in the BGG chart?

“The reception has been tremendous - far better than expected. Given how successful it has been, we may revisit that type of package in the future, but there’s nothing in the works yet.” And after Frosthaven?

“Oh, is there life after Frosthaven? I am not sure. This is such a stupidly large project, I am 100% focused on getting through it alive. Afterward, a nice long break, and then I have some Euro ideas I’d like to explore.”

You can pick up a copy for Gloomhaven: Jaws of the Lion by clicking here