Welcome, readers; it's your Miniatures Editor James Winspear here. I'd like to introduce a new regular column on the website; Industry Interview! Behind every game, every ruleset and every miniature lies someone's story. The wargaming industry was built by enthusiasts, and so this column is dedicated to talking to people in it about their history and what they do. Each time, Industry Interview will focus on a different company with a series of quick-fire Q&A questions. So, without further ado, our first interviewee; Steve Sodden of Mad Robot Miniatures!

1. Can you tell us a bit about Mad Robot Miniatures and yourself?

Well, my name is Steve Stodden, I live outside of Phoenix, Arizona in the United States. I am 48 years old and I have a degree in Audio Engineering from Columbia College in Chicago, IL. I run Mad Robot Miniatures, a company that produces 28m heroic scaled, highly detailed, resin figures for tabletop wargaming, mostly in the sci-fi genre.

Things started about 7 years ago, when I was a hobbyist that loved 40K Imperial Guard. I would do some kitbashing with various GW plastic kits but I was always on the look out for other parts from third parties.  At the time, they were few and far between, especially in the US. I found myself wishing for options that weren't there so when I found myself bored with working in retail, I decided to try selling 40k bits.  I sucked at that, greatly, and then decided to try the other side of that coin, that being the design and creation of my own parts.

3. It seems like MRM focuses principally on 28mm sci fi human infantry. What was behind the choice?

Initially it was a way to offer 40K Imperial Guard players some options for converting. The 3rd party bits market was a little less crowded back then and it was something I really had a passion about. I've also started to explore post apocalyptic ideas, in addition to scf fi, and they both offer quite a bit of room to explore my creativity. 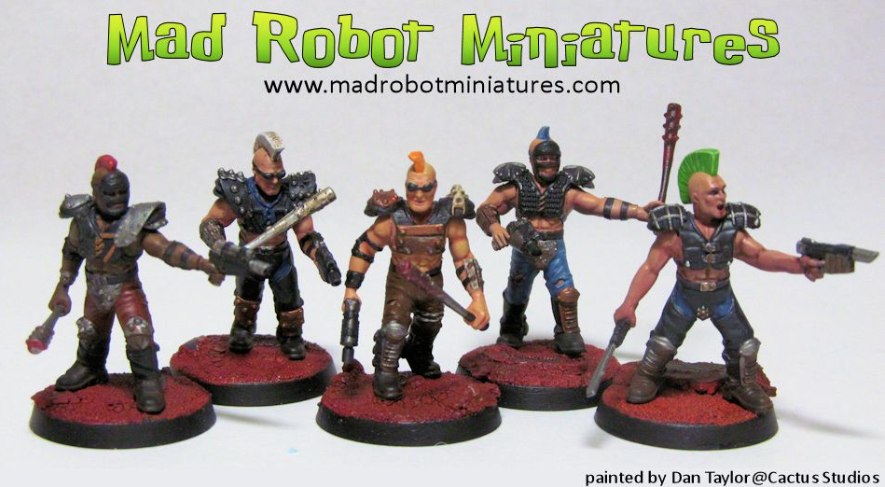 4. MRM is an entirely one-man show. What’s it like trying to run a miniatures business by yourself?

At the same time, it's the most challenging and rewarding thing I've ever done. I work 10 hours a day, 7 days a week, but even then you never stop thinking about it. I've taught myself sculpting, casting, all of it. I came to know the business side of things from my former life as a retail manager. More often than not, I describe myself not as a 3D artist, but as a small business owner. I do so much more than just the 3D, the buck stops with me, no matter what. I wouldn't have it any other way.

5. What do you think makes a good miniature, aesthetically speaking?

A good mini is an "in demand" mini. There are lots of sculptors out there, everyone has their own style and at the end of the day, this is art. That makes the appeal quite subjective. I can look at something and think to myself about what I might have done differently but I would never label anything "good" or "bad".  It's art...that's enough.

6. Wargaming has, at least traditionally, been something associated principally with Britain, though it’s also quite popular in Europe. What’s the wargaming scene like out over the pond in America? What are the most popular games out there?

Believe it or not I am not much of the gamer these days, I spend so much time being focused on Mad Robot. The basic trend in tabletop wargames seems to be going towards faster games, played with only a handful of minis for each side. Another trend that continues to be strong are the hybrid board/miniatures games.

7. How have you tried to get the word out about MRM? What’s been the most successful avenue/ outlet thus far?

I've purchased ads here and there, I post on a few forums. Facebook has become my primary way of communicating with my customers. I always get the impression I could be doing a bit more, in terms of ads, but I like they way my customer base has grown slowly, steadily.

Our CDF line has proven to be the fan favorite, and a close second is held by our Caipari Shock Troops.

9. What practical advice would you give to anyone like yourself who wanted to run their own miniatures business?

1) Be prepared to fail and then fight with everything you have to avoid it.
2) Talk to your customers, ask them what they want and then make it for them.

10. Finally, if there was one thing about wargaming you enjoyed the most, what would it be?

"Crush your enemies, see them driven before you, and hear the lamentations of their women..."