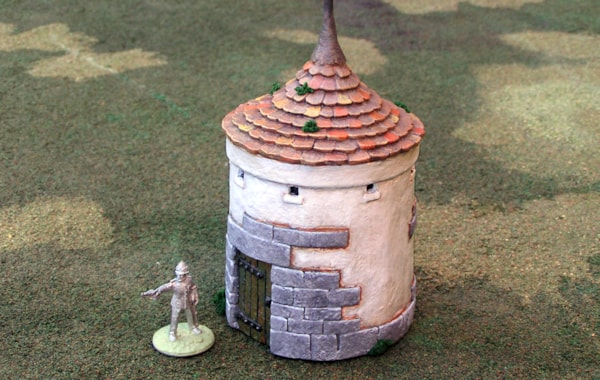 Practical Wargames Terrain, with words and images by Tony Harwood

Wth this instalment of my series on producing practical wargame terrain on a budget, I have chosen this quaint dovecot or gariotte from the Quercy region of France. The model is based on a number of buildings that I found in a tourist information brochure some time ago. I usually cut out and copy any images I want to keep or produce simple sketches which are then stored in one of my many, many scrap books. As with the earlier builds I have tried to stick to my five simple rules or guidelines: the model had to fit into an imaginary 6 inch x 6 inch x 6 inch box and must be robust, painted to a ‘good’ gaming standard (I think) and to be designed for generic in usage. Oh, and it had to be built from cheap, readily available materials.

With this model I have tried to produce a model of a slightly higher finish or better quality than the earlier tutorials as I wanted to show that these simple techniques and materials can produce superb models for your wargame table while not taking too much time to build or costing the earth.

Construction was based around an empty cardboard thread spool (picked up at a craft repurposing store) that I first trimmed to size and then ‘bulked out’ with simple corrugated cardboard strips glued in place with my hot glue gun (this is a simple method to increase the size of models so I suggest that if you err of the side of too small at first, you can always increase the bulk later on). After securing a top and bottom from 5mm foamboard this core was strengthened with torn newspaper strips applied over PVA glue and the stonework constructed from egg box card glued in place with PVA glue. The roof tiles were cut from thick artboard over a series of card formers while the bulk of the texturing was done with a dilute filler and PVA glue mix stippled on with a large stiff brush.

Painting followed the brochure illustrations with a clay tiled roof, whitewashed walls and exposed granite blocks to the lower edge. A quick and easy build that took less than five days from start to finish. However I feel that the techniques shown could be used on a number of different projects to produce similar pieces of terrain for your own wargame table. 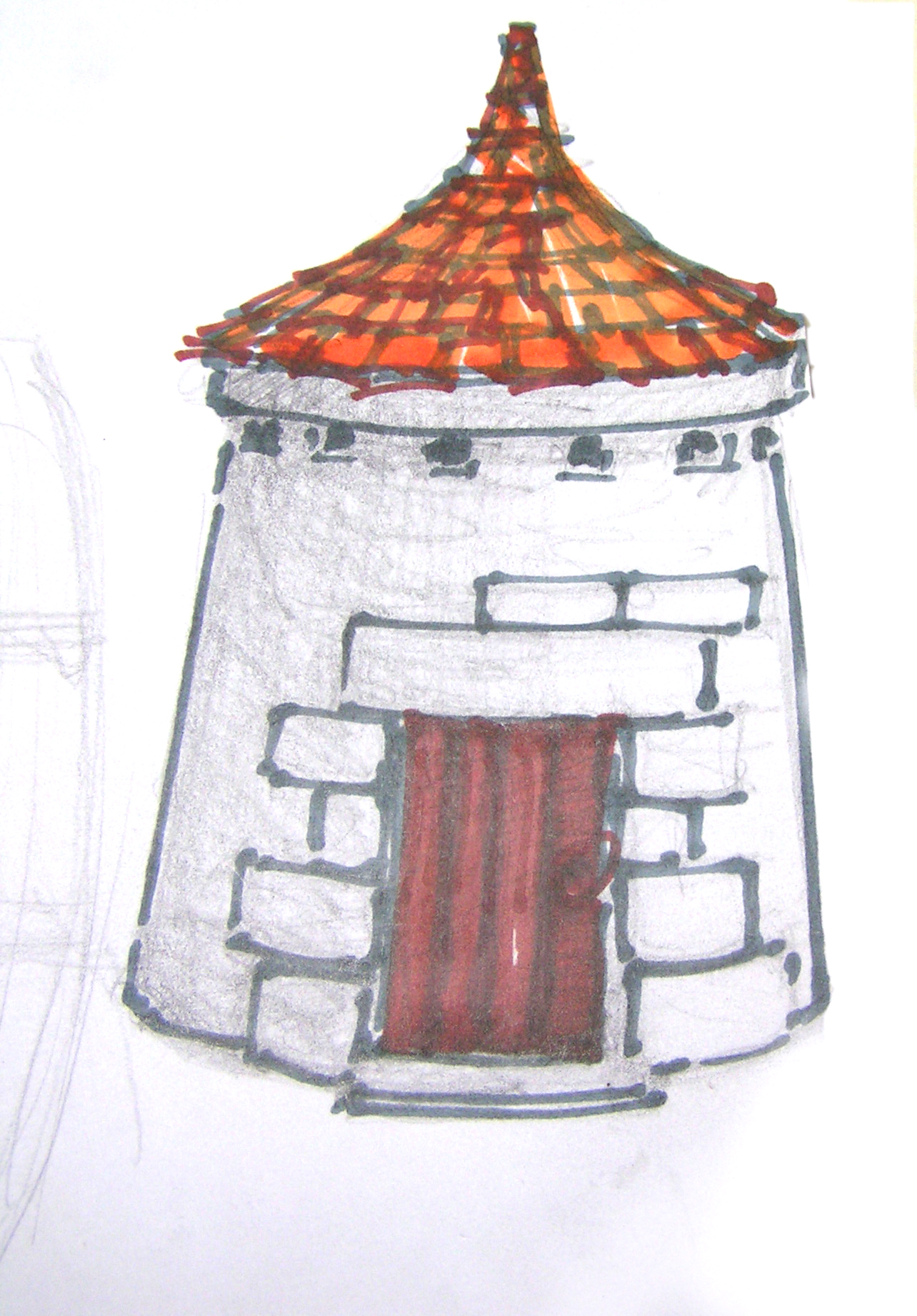 This simple sketch was an amalgamation of a number of stone and plaster dovecots or gariottes found in a tourist brochure of the Quercy region of France. Similar brochures or tourist guides have supplied me with the inspiration for a number of wargame models and are well worth searching out in charity shops, holiday brochures or on-line.

The core of this short tapered tower is a thread spool (used to hold thread or cotton for industrial sewing machines) which was cut to size with a hacksaw blade then bulked-out by gluing strips of corrugated cardboard to the edges with my hot glue gun. The top and bottom are simply discs of 5mm thick foamboard also glued in place with the hot glue gun. The card tube is 80mm tall and 70mm diameter at the base.

Prior to taking this photograph, I had sanded the rough spots with some 200 grit sandpaper. 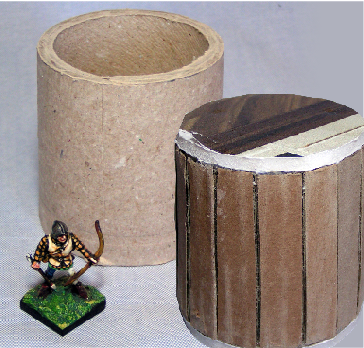 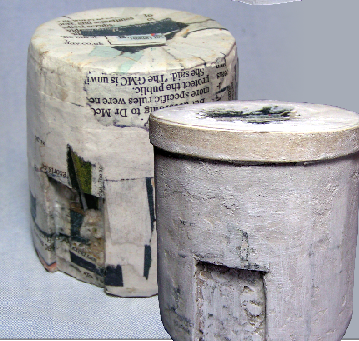 The 38mm tall doorway was cut out of the corrugated cardboard layer with a new scalpel and the edges re-trimmed with more torn newspaper applied over PVA glue. I have written in earlier tutorials how this simple technique produces very strong and stable ‘cores’ onto which it is possible to add more detail. I then wrapped two layers of plain cereal box card around the top of the tower and used a ready-mixed filler, PVA glue and acrylic paint mix to add some surface texture to the plain walls and hide any imperfections. Once fully set, I lightly sanded the surface again.

The small openings at the top of the walls were intended for the pigeons or doves to enter the nesting boxes stacked inside. I first drilled included eight openings at regular intervals with a 5mm pilot hole and opened them into a square with a scalpel. The stone blocks along the lower edge of the walls and around the doorway were modelled from strips of egg box card glued in place with either PVA glue or superglue. Some of the sections needed superglue to hold the shape around the curved walls. I have used one egg box worth of card on this model. 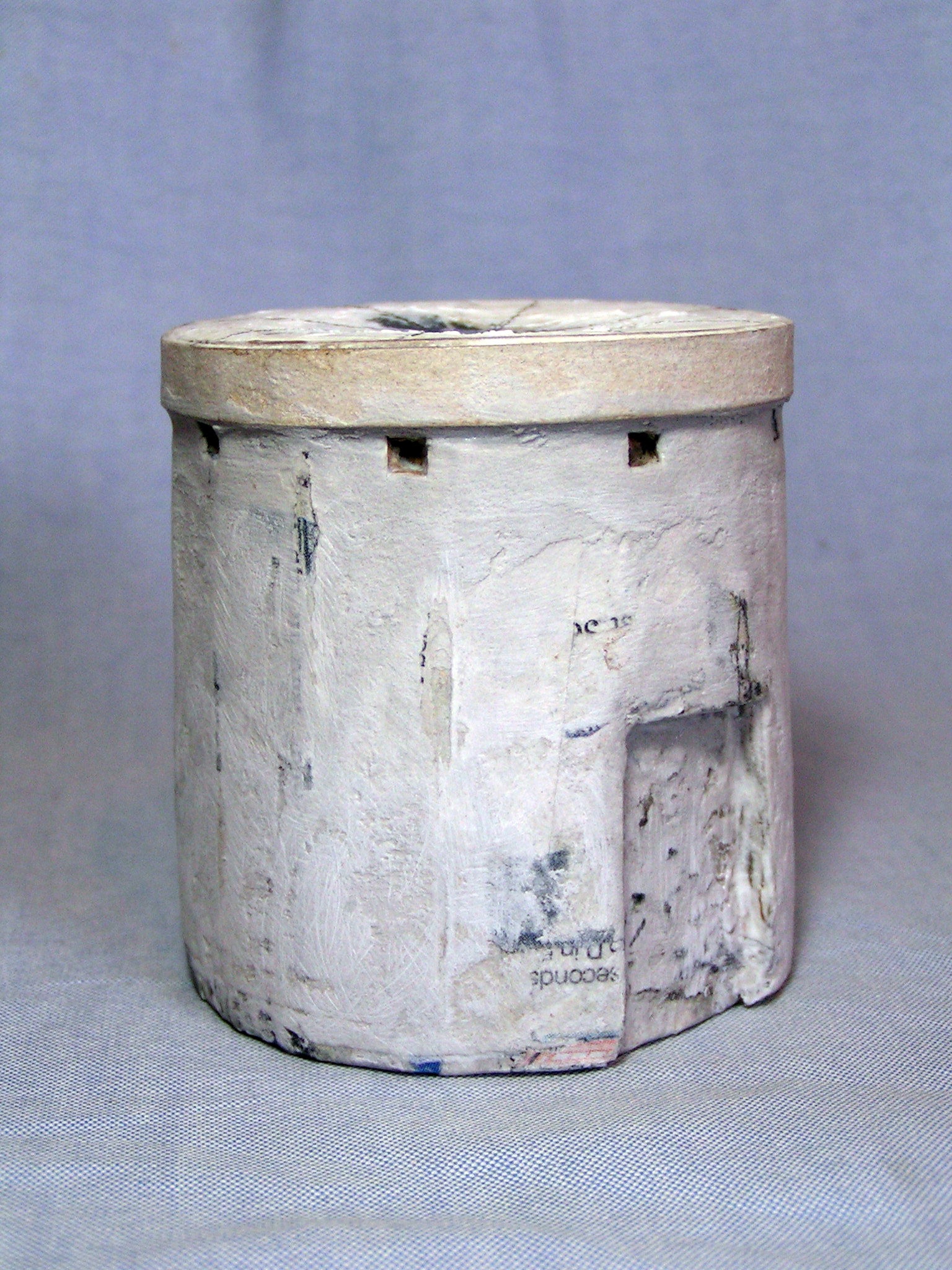 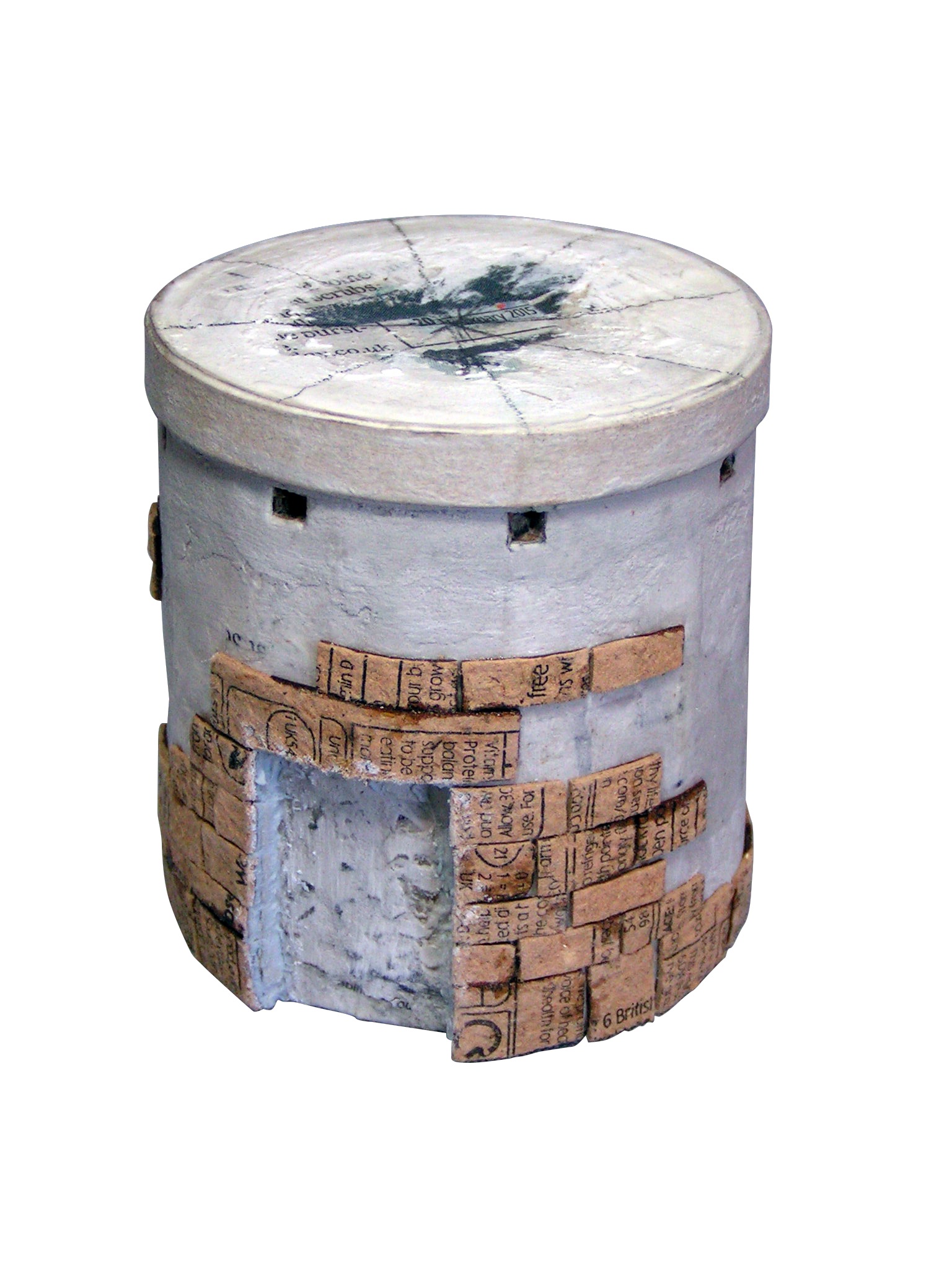 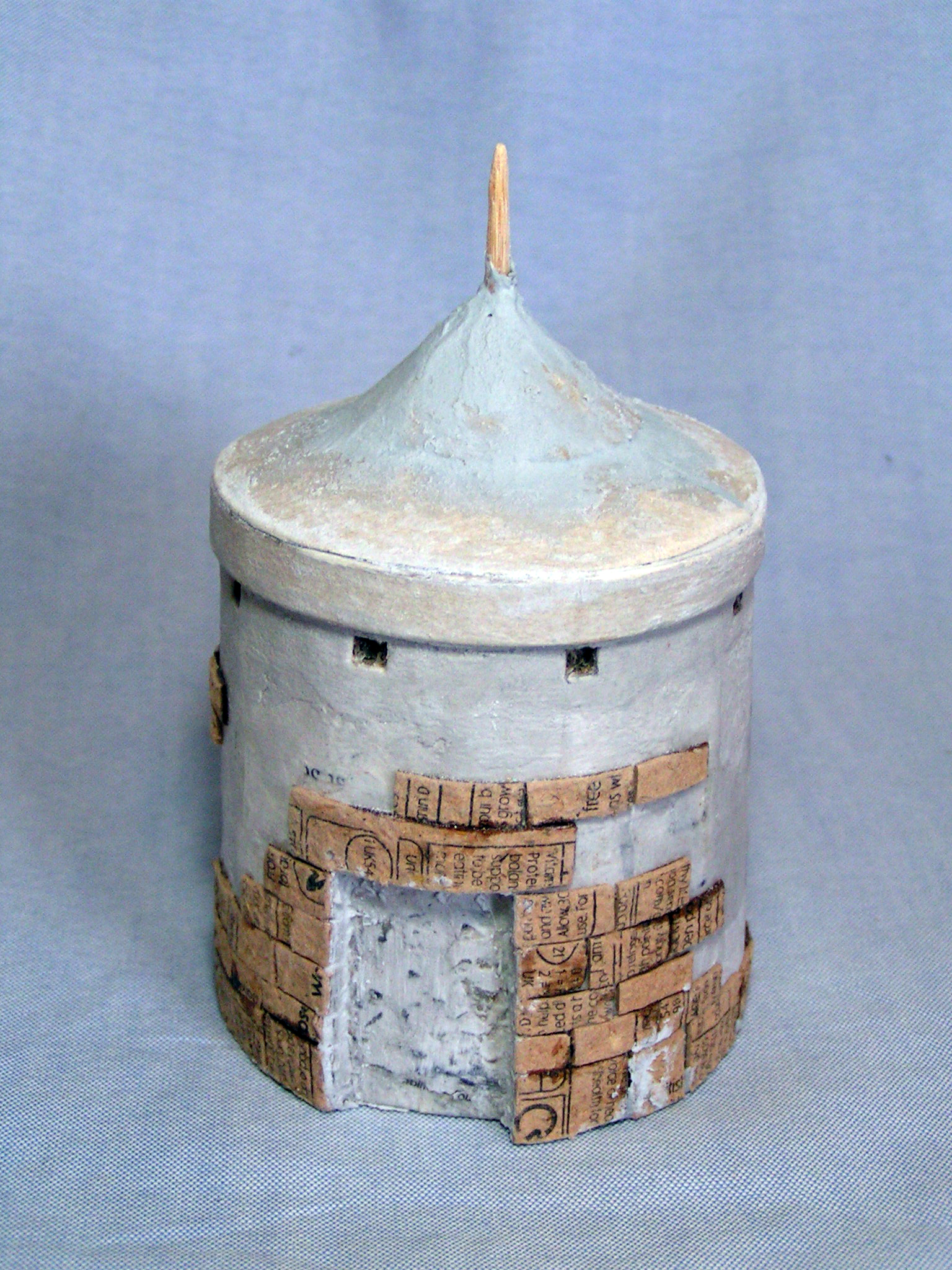 The conical roof sub-frame was built from three concentric card cones glued on top of one another. I find that this gives a more natural curve to the roof shape than a single uniform cone. I used both PVA glue and superglue to secure these shallow cones in place. The joins between these layers were filled and smoothed out with ready-mixed filler (applied over PVA glue) while the central spike is a section of 3mm bamboo skewer this time glued in place and sealed with superglue.

The roof tiles were cut from thicker artboard (for acrylic or oil paint and bought in The Works, although you can sometimes pick up used examples in charity stores for just a few pence). Each individual roof tile was cut and trimmed to shape before being glued in place with PVA glue. However a few needed securing with superglue. There’s hundreds of individual tiles and this can be a little tedious but I have yet to find a better method. My advice is cut out all of the tiles before trimming them down to size and listen to talk radio or a good audio book while doing it. 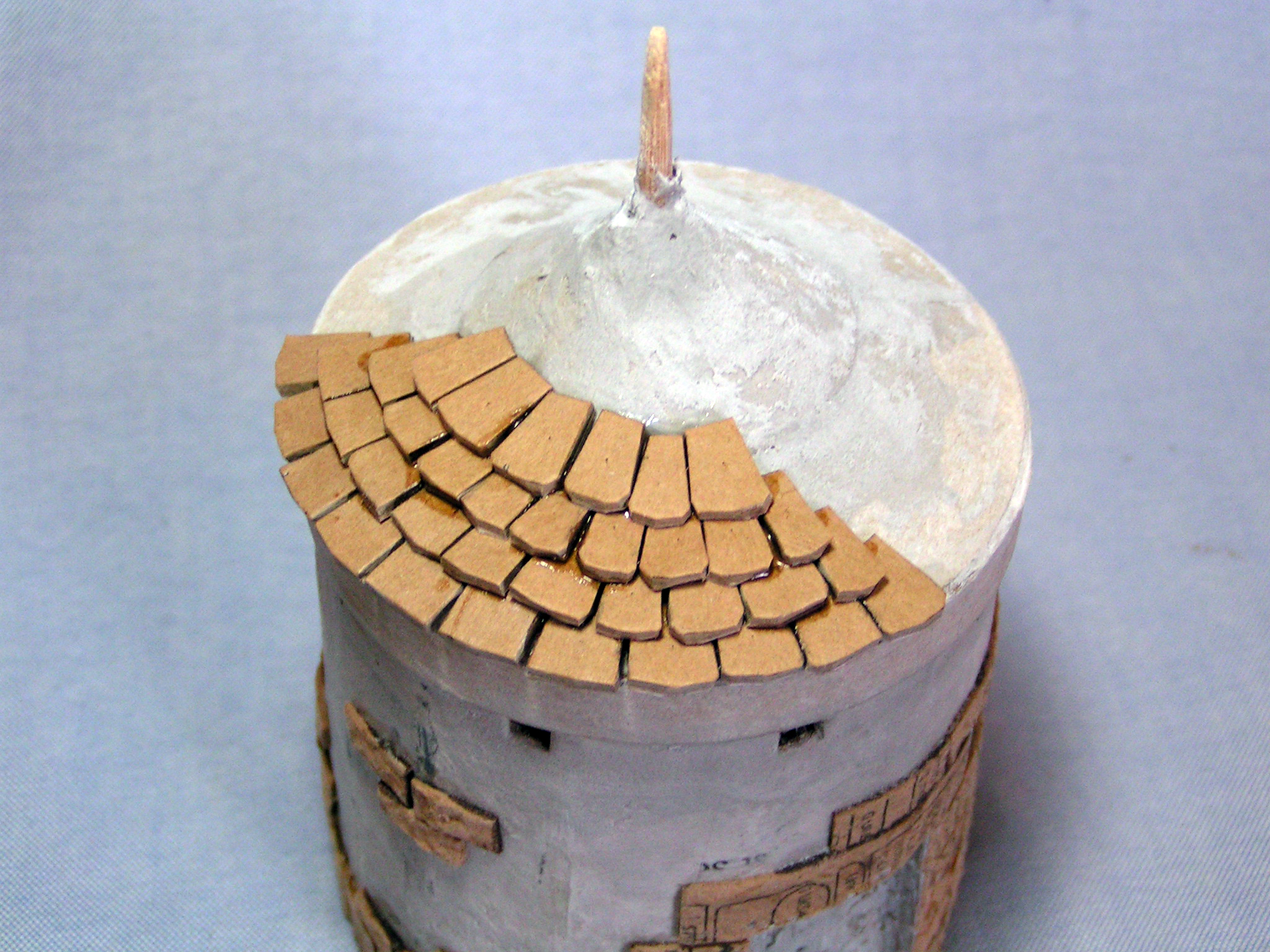 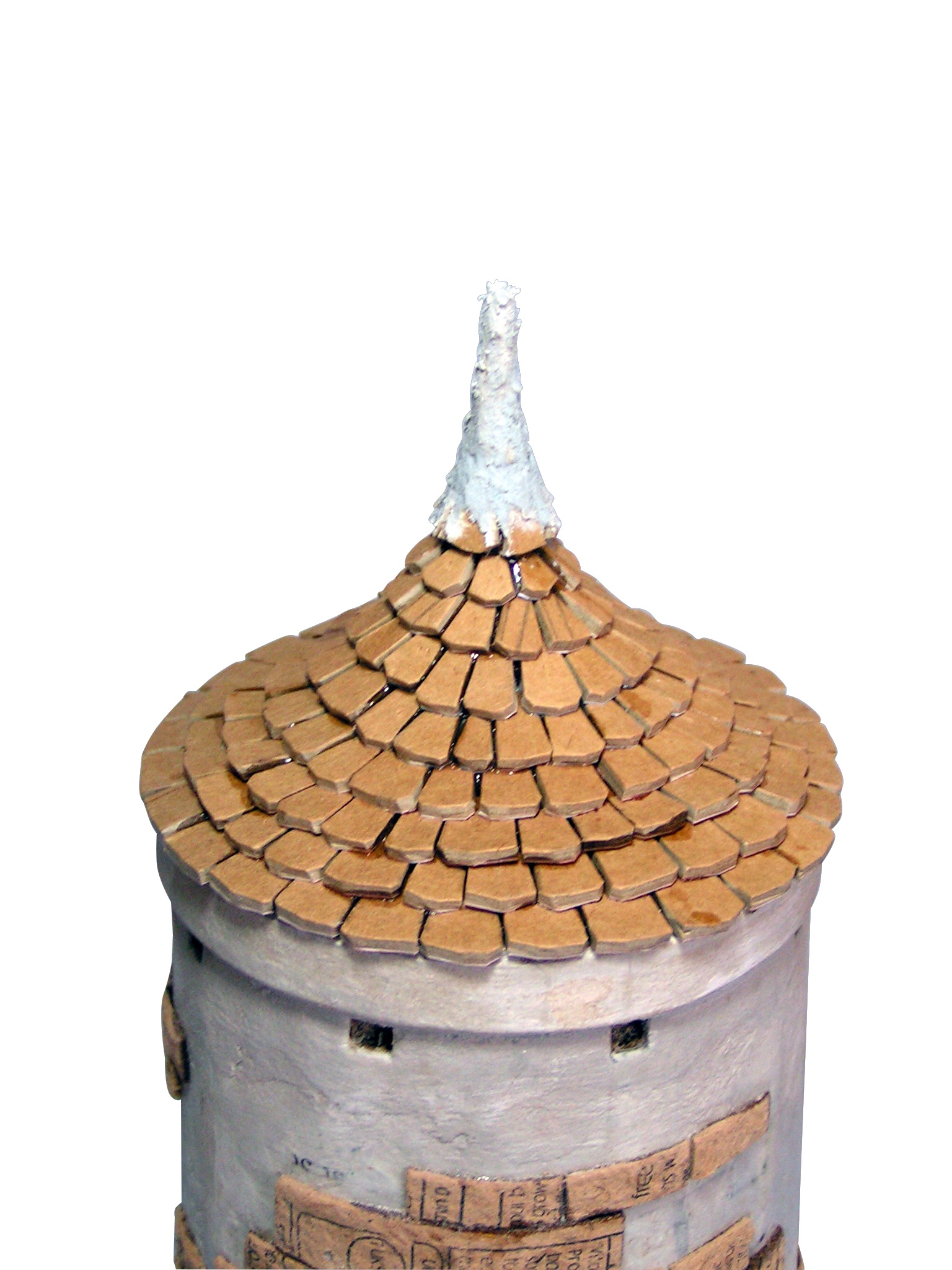 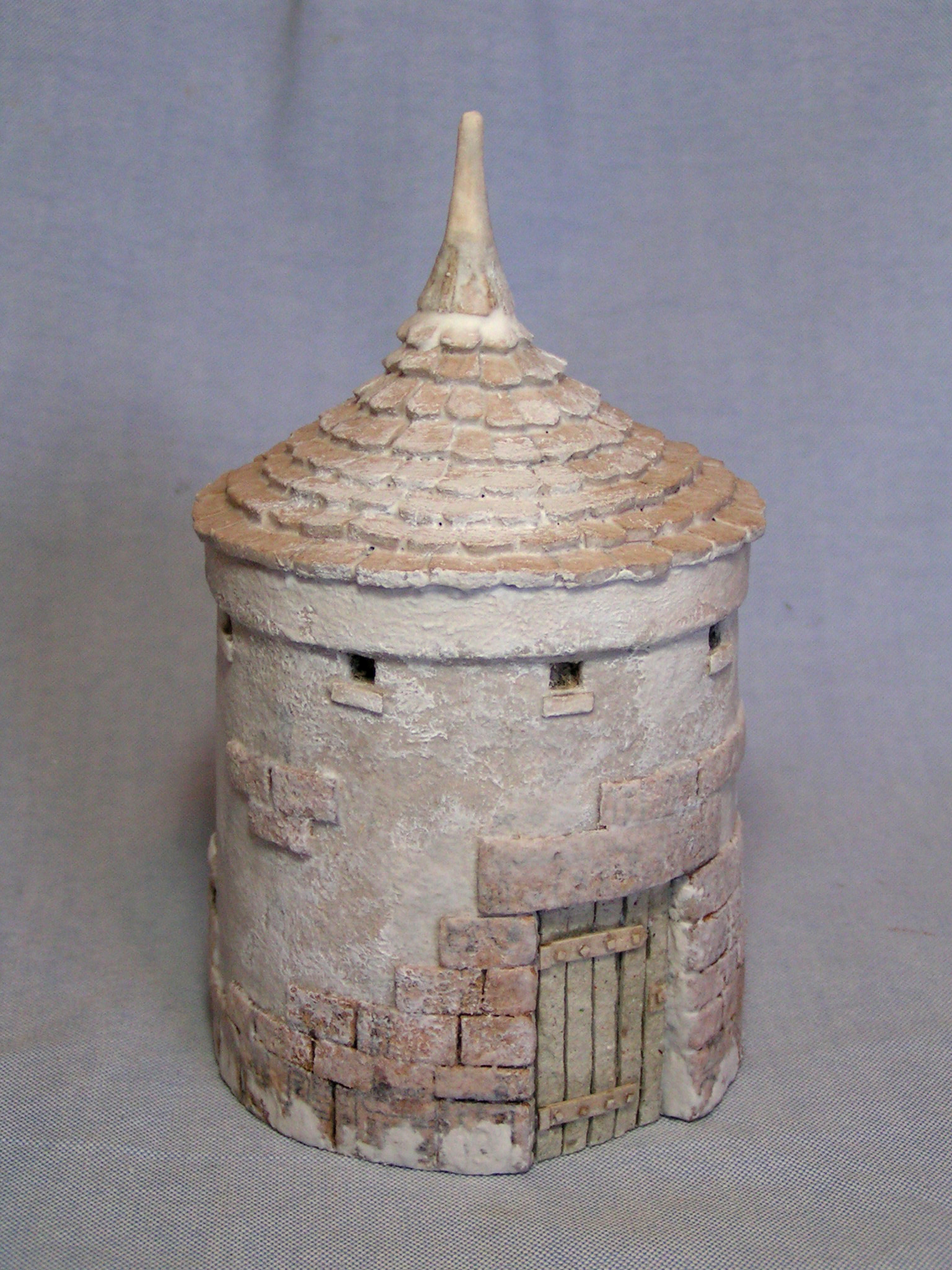 The planked door was also built from more egg box card. Each thin strip being glued in place with superglue before the door furniture made from cereal box card was attached. I then added a couple of layers of the ready-mixed filler, PVA glue and white acrylic paint mix. This home-made mix was used for three reasons, firstly; to add some additional texture to the model, secondly; to strengthen the model and make it strong enough for gaming use and thirdly; to act as a simple ‘Gesso’: an undercoat or sealing layer to the model ready for the painting stages.

Painting started with the tiled roof, which was painted and drybrushed many times before I had a finish I was happy with (it is always worth spending time on your roofs as this is the part of the model that you spend most time looking down on). The exposed granite stones were painted in a similar method but using grey with just a hint of cream or linen coloured paints to ‘warm’ the otherwise ‘cool’ grey. The rustic door was painted in a green/brown mix with black and brown metalwork before having a light wash. 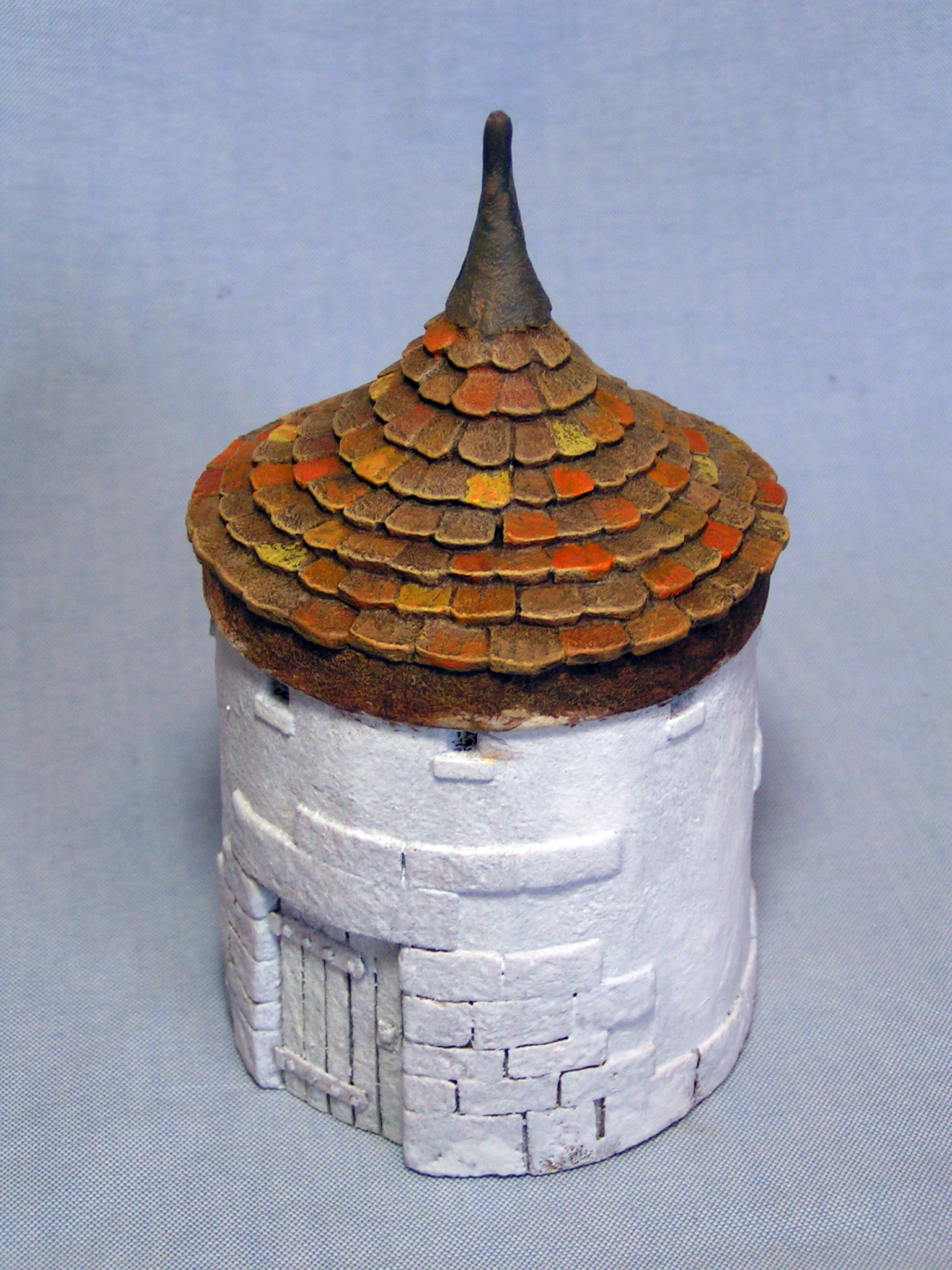 I varnished the finished dovecote with Galleria matt varnish and then touched-in a couple of spots on the whitewashed walls with pure Titanium White paint (I don’t usually recommend using either pure black or pure white on models, but in the case of whitewashed walls it just kind of works). The granite stones were treated to ‘extreme highlighting’ on the upper right edges and odd bits of green ground foam were glued in place with superglue. The French Dovecot is 135mm tall (to the point of the roof) and 80mm diameter at the base of the model. The doorway is 38mm tall and 22mm wide. 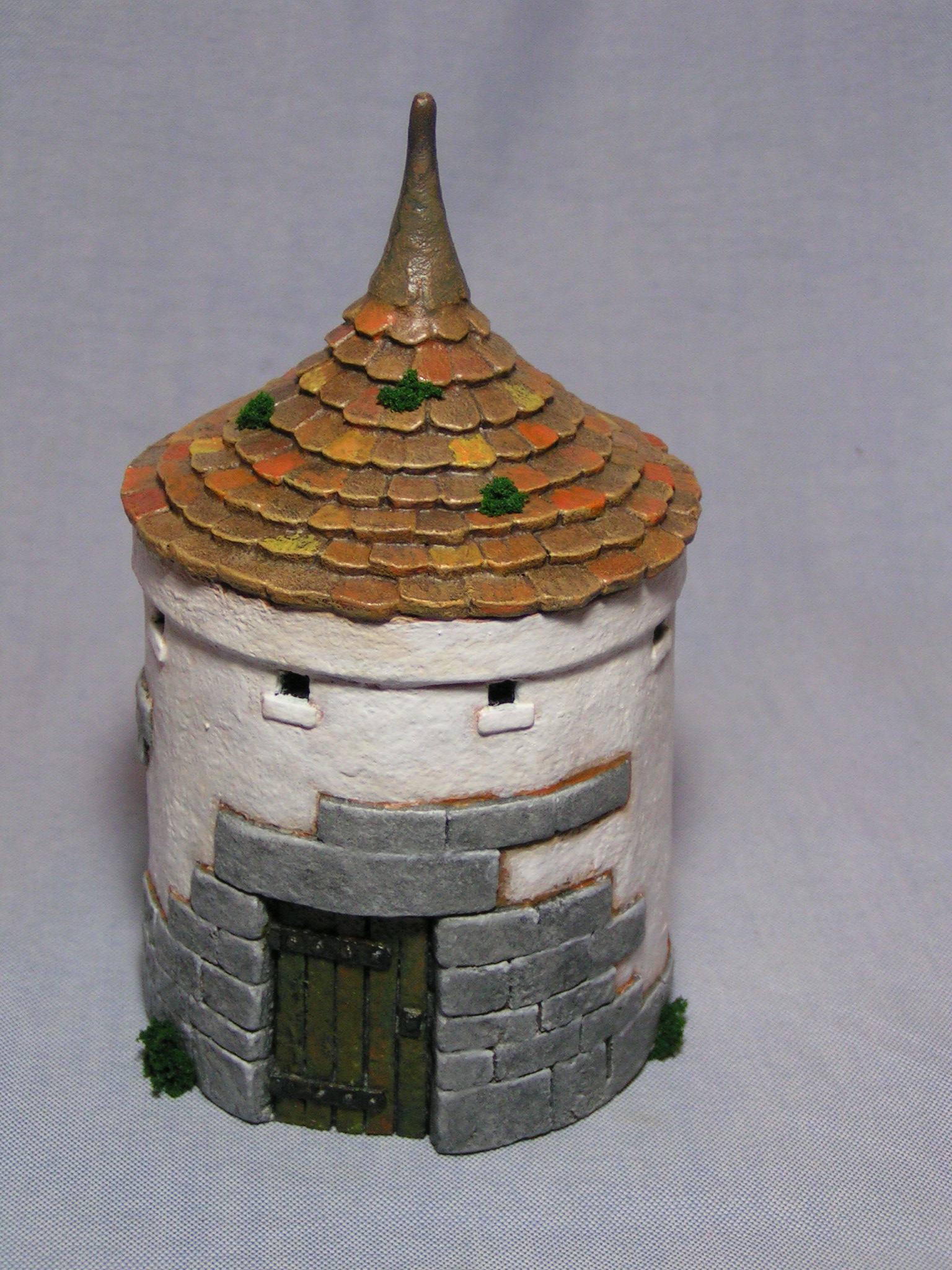 This article originally appeared in issue 447 of Miniature Wargames. You can pick up your issue of the magazine here or subscribe to make sure you never miss another issue.