The Devil’s in the details

One of the most persistent trends in wargaming over the last decade or so has been the dramatic increase in the level of details that miniatures can hold. Does this mean that their quality has increased? Arguably not.

The obvious disclaimer here is that quality is a largely subjective notion, especially when applied to the world of miniature wargaming. But there seems to be an almost unhealthy focus on increasing the detail on a miniature to the exclusion of all other considerations.

Your stance on this will likely depend on how you regard wargaming figures. To some, they’re simple gaming pieces. They may add visual interest to a game (compared to chips or tokens), but they’re still gaming pieces. To others, a miniature isn’t fit for the gaming table unless it’s been properly painted, based and varnished.

I admit that I’m more in the figures-as-gaming pieces category, although I’m still loathe to put unfinished models on to the tabletop for a game. Undoubtedly painted miniatures (and proper terrain) add something to a game, but it’s not clear that having miniature works of art on the table does.

There’s three reasons for this. One is that it’s hard to have a relaxed game if you’re moving around the plastic or resin equivalent of a Faberge Egg. Secondly, and related to the first point, more detail often has a pernicious way of meaning more brittle. One of – in fact probably the – reason I mainly stick to gloriously chunky 28mm scale heroic figures is that they’re less likely to snap into a handful of brittle pieces if dropped. Many is a miniature I haven’t bought solely on the grounds of how likely it looks to break.

The main reason, though, is also the most obvious. More detail means more time getting a miniature from the paint station to the tabletop, especially if you’re someone who just can’t quite live with the idea of seeing an army composed of grey plastic and pewter.

Instead of focusing solely on detail, I propose a new metric for value. This metric consists of three things – how durable a miniature is, how aesthetically pleasing it is and how well it conveys what it’s supposed to be.

Let me give you an example of one of my favourite miniatures of all time; the firing Steel Legion infantryman. 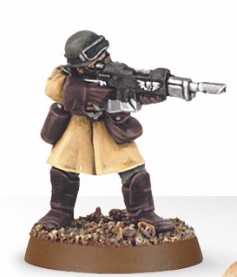 For a start, like most of the old Steel Legion minis, it’s a pretty durable figure as it’s only a single-piece casting. Aesthetically, it’s got a strong, dynamic pose. And lastly, the mini gets the look it’s going for across with only the minimum amount of necessary detail. The Steel Legion are basically just WW2 Germans in Space, and everything about this figure conveys that; the bowl helmet, the gasmask, the lasrifle, the knee-length jacket, the boots and gloves and the few pouches. Painting a miniature like this is a cinch, as you could probably get away with only half a dozen paints – a beige, a brown, a black, a metal, a skin tone and a wash. Compare that to some miniatures today where you can lose hours simply filling in details that – at the end of the day – are just so much window dressing; gems, extra equipment, insignia, doodads, piping, trinkets, so on and so forth.

People who want detailed miniatures are often vocal about it both with their voices and money. But manufacturers should be mindful of the tabletop standard crowd as well. Sometimes, good enough really is good enough.