Have You Played... Nemesis? There’s few ruder wake-up calls than coming out of hypersleep to find that your spaceship is overrun with aliens – and they’re not the only ones you have to watch your back for in, Nemesis

Before the Alien franchise was dished out fairly liberally around the board gaming world (see Alien: The Roleplaying Game from Free League, and the recent Ravensburger outing in Alien: Fate of the Nostromo) there was only one way to get the full Alien style thrills on the tabletop – and that’s in the form of Awaken Realms’ Nemesis. Join us as we hop out of hypersleep to work out what exactly keeps leaving claw marks around the vents – and whether we should trust whatever that is compared to the other people around the table.

Nemesis is the apex predator of ‘survive until stabbed in the back’ games. Players draft a play order, and then get to pick a character of two chosen randomly, along with personal and corporate objectives. You’ll recognise all the characters – a trigger-happy solider, a sneaky scout, an over-curious scientist, a hard-bitten mechanic, a pilot who knows the ship like the back of their hand, and the captain – who somehow is meant to keep it all together. Maybe anyway. As you’ll soon realise, the secret objectives that each player draws at the start of the game give you your motivation. Maybe you want to escape with an intruder egg, maybe you want to kill the queen, maybe you want to set the ship on a course for Earth. Maybe, if you’re playing with enough players, you have the job of killing player one. Or blowing the ship up and being the only survivor, snugly jettisoned into space in an escape pod.

Once you’ve got your objective and your character you take turns exploring the ship and taking actions by discarding cards. Everything comes with a cost, and your hand is also your ability to react to intruder encounters. Moving normally costs one, whereas room actions (assuming the room isn’t malfunctioning) cost two. Card actions cost themselves plus whatever their printed cost is. A simple system that puts the risk of ‘moving quick and breaking stuff’ up against the risk of moving too slowly and everything getting out of hand. 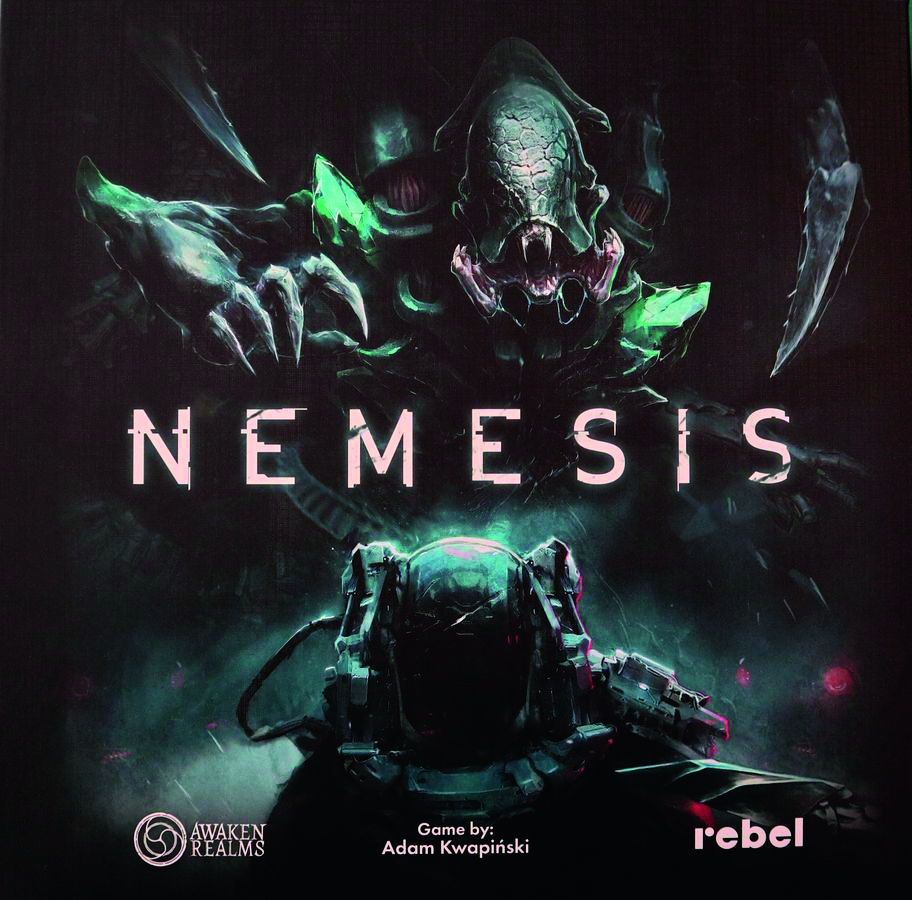 Movement can be done quietly for a cost, which you might want to consider if someone has already made a lot of noise in the room you’re going into. Entering a room and making noise means rolling a dice and adding a noise marker to the hallway associated with the number. Hit a number that already has a noise marker, and you’ll trigger an encounter – drawing from the bag of alien tokens. What you draw pops up in your room in the form of (usually) a really nice miniature that’s planning on killing you. Each token is numbered, and if you have less cards in your hand than that number, the alien attacks. You flip a card, and if the intruder type is on the card, you get hurt, and sometimes, critically wounded. Running away is an option, as is hoping to be able to kill the alien with turns and cards you have to hand – hey, maybe someone could come and help? Or not, after all, some of them might find it really useful that you’re going to die.

And we haven’t even talked about the fact that if you have too many malfunction or fire tokens on the board, everything just goes KA-BOOM. Or the contamination cards that you get for events and being nibbled by an alien – these need to be scanned, using a red film scanner over scrambled glyphs, to work out if there’s something inside of you. Or the doors, which, just like in real life, are the best way to start an argument if you slam one in someone’s face.

Once everyone has passed, things move on to the intruder phase. Aliens attack using a flip of a card, an event card causes you some trouble (usually) and then the intruders move based on the event card information. Then you draw a token from the intruder bag, and depending what you get, you’ll make the bag more lethal by replacing larva, or cause noise rolls for everyone or, if you’re really lucky, nothing.

And then you start again. Hopefully alive and a little closer to your goals. 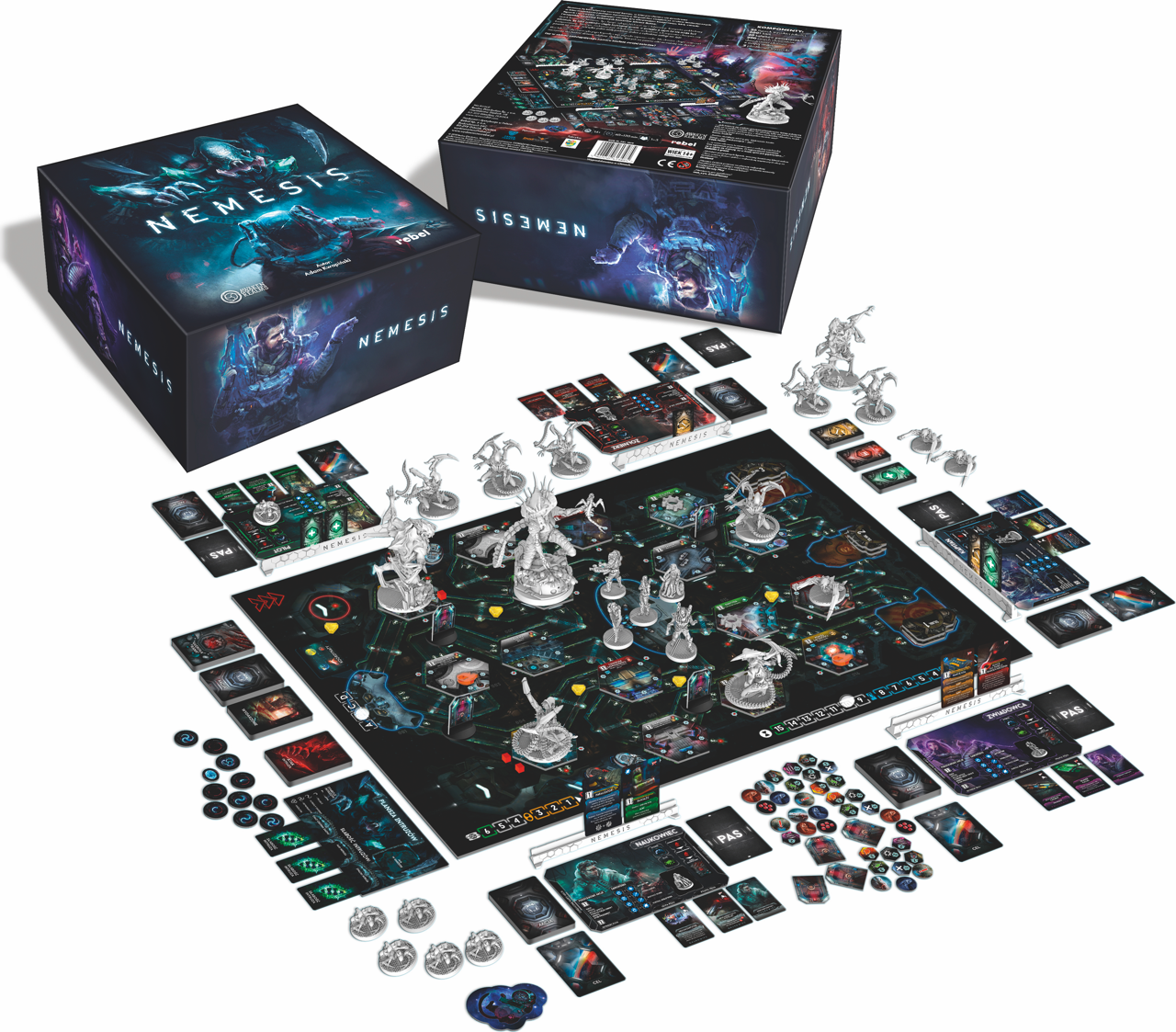 There’s something good about surviving in a game. You might start the game with the hope of completing your objectives, but a few turns in you’ll just hope that you’ll survive. This sense of lowering your goals down to the basics creates a really exciting curve to the game. Yes, originally you were looking for the nest to be able to find and egg to escape from the ship with, but now you’re desperately looking for the surgery room to get whatever it is in you, out. You were trying to get to the cockpit to check where the pilot had just pointed the ship, but now you’re detouring to fix the generator room because if one more malfunction token hits the board, you’re all done.

It’s a game designed around its dramatic beats. The first encounter has you throw one objective of your original two away, and the first character death causes the escape pods to open. After escaping (or dying) you check the engines and the coordinates, and whether any of your contamination cards are going to kill you (unless you’re dead). You might discover that the person you thought you were working with to fix the ship so it could go to Earth actually just wandered through the engine rooms swinging a spanner into anything that looked expensive. Or that you weren’t really going to Earth like the pilot promised.

This spirit of backstabbing should be engaged in fully. Often players start their games very wary of one another, when in reality working together comes with huge benefits. If your players can embrace the semi-cooperative elements of the game then you’re in for a treat of, probably, inglorious space death.

The co-op modes work particularly well for a first game, as everyone instinctively will want to work together at least a little bit from the start. The best way to die is to wander off by yourself somewhere noisily after all. We personally like to run games using a handful of the co-op cards to bind people together, and then dish out additional objective cards for a little spice. Without this, it can sometimes feel a little too paranoid at the table. Naturally the cooperative mode cards also work solo, making for a sometimes entirely brutal experience. But not always, the dice can be kind and cruel, and the event deck isn’t entirely evil (except in the case of the card that kills every player with a larva on their board).

If you’re on the hunt for the Aliens game that will satisfy both your love of space paranoia and also occasionally blowing the heads off things that want to eat you, Nemesis is the distress signal you’ll want to answer. Now widely available after a few rounds of Kickstarter and expansions (including Lockdown, a standalone expansion that’s compatible with the original), there’s more than enough to get your multi-jawed-teeth into.