Have You Played: Fireball Island? A childhood classic restored as a hobby game, and then returned to the mass market shelves, Fireball Island is worth a shake

This article originally appeared in issue 62 of Tabletop Gaming Magazine, and was written by Christopher John Eggett. Pick up the latest issue of the UK's fastest-growing gaming magazine in print or digital here.

Brought back to life by Rob Daviau’s Restoration Games, Fireball Island: The Curse of Vul-Kar funded on Kickstarter in 2018 to the tune of $2.8million. Consisting of a large plastic island with moving parts and a ton of stretch goals to make the game more robustly hobby orientated, the rebooted project seemed to show a huge amount of love for the source text while recognising that there’s part of the games industry that doesn’t pour that same amount of love into their products. This 1986 game was originally a Milton Bradley product which sparked so much joy in young minds, that it was a shame to let it languish in car boot sale obscurity.

And now, the game has returned to the shelves of toy stores, under the name Fireball Island: Race To Adventure with the help of Goliath Games. This version of the game is a slightly more budget friendly outing with a smaller footprint, cardboard tokens, less plastic moving parts, and maybe wobblier plastic used on the vacuum-formed island itself.  The game has had its rules stripped back for this reimagining, sticking to a core collect-and-get-out loop, yet it retains the core joy at the heart of the volcano. So, let’s begin our expedition. 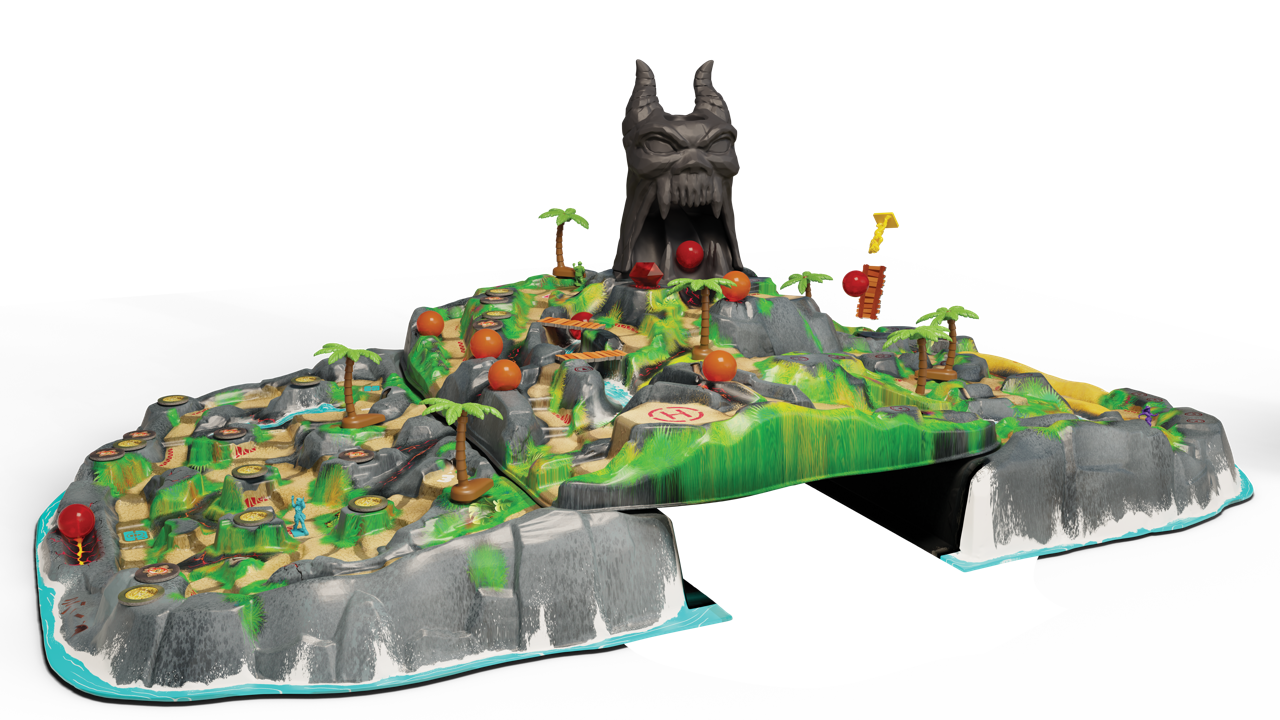 Apart from a slice of history that’s travelled its own path, it’s a game about getting points and dodging flaming marbles. In the simplified Race To Adventure Each turn players will turn a card, and do the actions on it – namely, move a number of spaces and then either flick a marble, steal a treasure by passing another player, or cause a cataclysm by dropping four red marbles into Vul-Kar, causing joyful chaos.

Players get points by passing face-down tokens on the board, and adding them to a face up space in front of them. Some of these treasures are represented by gold coins that, once three are revealed, trigger the game-ending dash to get off the island. In the Restoration Games version, there’s additional treasure and powers to throw into the mix to make the strategy a bit more compelling.

Of course, strategy isn’t what draws you to this game. It’s the opportunity to flick one of the, artfully placed, marbles from their perches around the island, down a hill and into one of your opponents. If you knock them over you get one of their treasures, making careful aiming your flick crucial to winning the game. We’d like to tell you that you can get good at this, but in reality it’s more to do with fortunate placing of your target, and picking the right marble to flick. It is surprisingly dramatic when your magma boulder bounces over the top of someone else’s piece because you chose to flick it in an off-piste manner, and getting smashed off the board into the sea is always funny.

Your counterbalance to this is turning the plastic trees on the board so that their roots stick out into the paths, possibly protecting you, and maybe kicking the marbles towards someone else. Or, using the somewhat random power of the caves to roll a dice and nip through to the other side of the island. While you’re guaranteed to be on the other side of the island after a trip through, you don’t know where and it’s often not obvious if it’s really going to help.

The winner of the game is the one with the most valuable treasure, with additional points being awarded for arriving at the helipad before anyone else. Get out with the loot, and you’re a winner. What more could you ask for as a motivation? 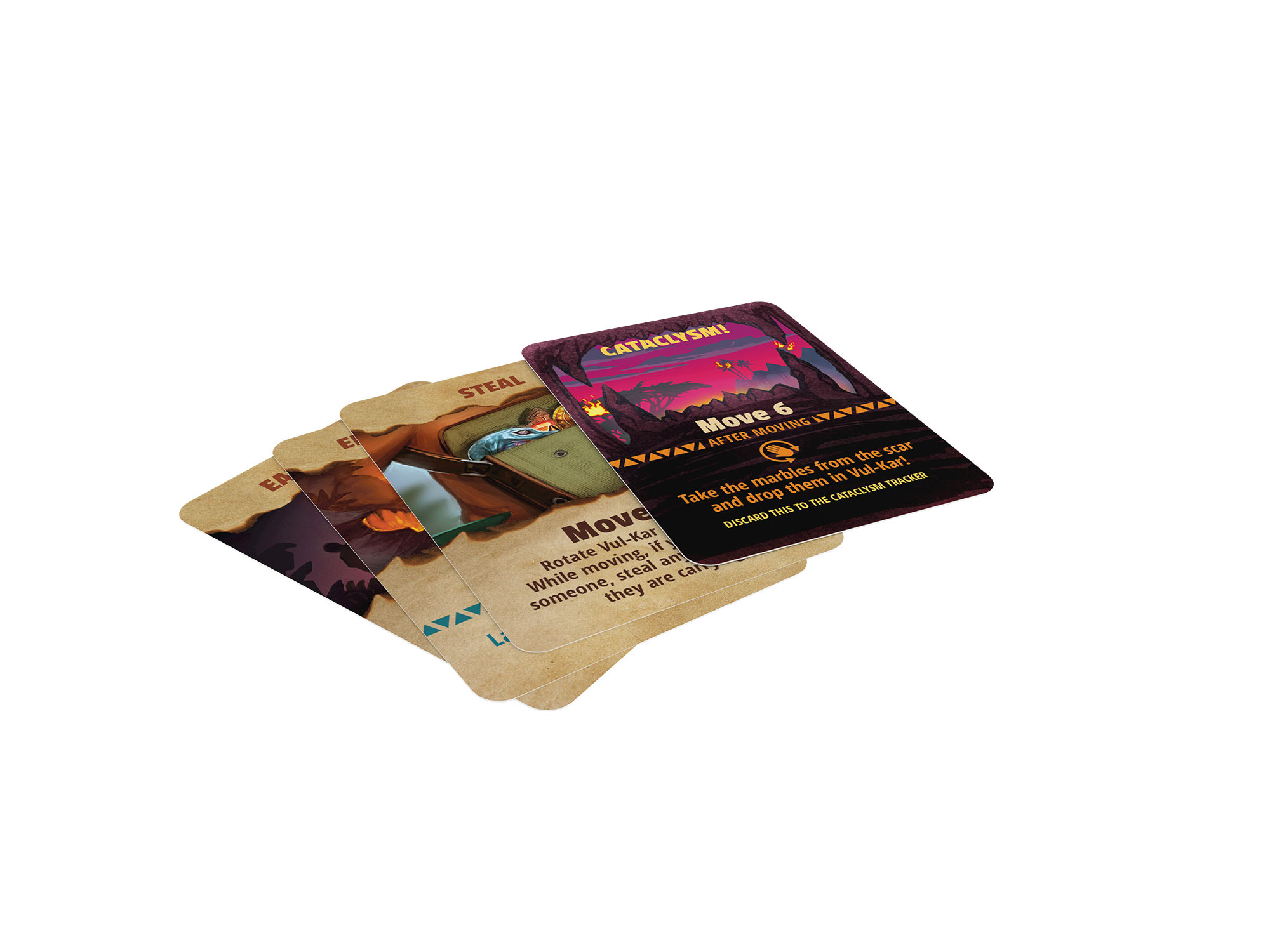 Fireball Island has something essentially nostalgic about it. It doesn’t matter if it’s a game you played as a kid, or even an advert in a magazine that you returned to repeatedly, it has got something that screams in the same key as the Thunderbirds’ Tracy Island. It also has the aural qualities of mousetrap, or any plasticky machine that throws pieces around. The rumbling chunk-chunk-chunk of the marbles working their way from the top to the bottom, tapping into the natural cone of the plastic island brings you back to a more physical era. It’s from a pre-internet world where the idea of a game was what sold it, rather than its rating, reviews, and general community consensus. Instead Fireball Island is a place you wanted to be able to go, it’s a location to visit at home – something almost lost with the pseudo-travel we all experience through vicarious internet experiences. It has the pleasure of laying out any map, or seeing any model of a place – it demands something from your imagination.

Its journey, whichever version you pick up (although, good luck with the 1986 version with its amusingly sad looking melty Vul-Kar and tarmac-alike spaces) nods to something else. We can lose the games we love over time – and the different versions we pick up are always going to be the one others are most interested in. This kind of conversation, about the way the game has made its way through various incarnations, will come up for games that you’re yet to receive through your Kickstarter pledges. There will be talk of the deluxe version with the minis versus the standees, and historians of games will wonder why no one took the chance to record the differences, and not let them slink of into obscurity in attics and storage units as the lives of the owners change.

For the lucky games that get resurrected, we get this story instead – a triumphant return and modulation on something supremely nostalgic that keeps its heart. If you’re looking for a game to play with the younger members of the family, and to give them some of that classic toy buzz of (probably) your youth, pick up a version of Fireball Island for your collection. If however, like me, you have a nearly-two-year-old that just likes rolling the marbles down the hill… well maybe just get it for that anyway.