From Wanderhome RPG to Yazeba’s Bed and Breakfast on Indiegogo, We Talk to Jay Dragon of Possum Creek Games Where it's always September 15th, and there's always room for another guest.

It’s difficult to wander past Wanderhome, a beautiful RPG that feels like it brings the nostalgia of Redwall, the joy of Everdell, and the happy existence of Animal Crossing to the tabletop in a single swoop. Focussing on a maths-less, confrontation-less experience, it was an unsurprising hit on Kickstarter and since then, bringing Possum Creek Games to the forefront. We caught up with Jay Dragon on Possum Creek Games, and the newest release since Wanderhome, in Yazeba’s Bed and Breakfast.

Possum Creek Games began initially as a zine printing outfit. “I would make zines at the local print shop, as a way to release other people’s zines and have their names on it. It slowly grew during the pandemic, and my business partner Ruby [Lavin] and I decided to officialise it for Wanderhome. It’s been fascinating growing out from just my own work, and now I spend just as much time helping other people publish their writing as I do with my own work.”

The game went on to be described as being “as soft and gentle as a woollen blanket”, with an “endlessly charming tone and feel” and one which “oozes the kind of open faced sincerity that invites smiles rather than mockery”, within Tabletop Gaming Magazine’s own review of it, and one which has spawned a number of Actual Plays, including one featuring Brennan Lee Mulligan. 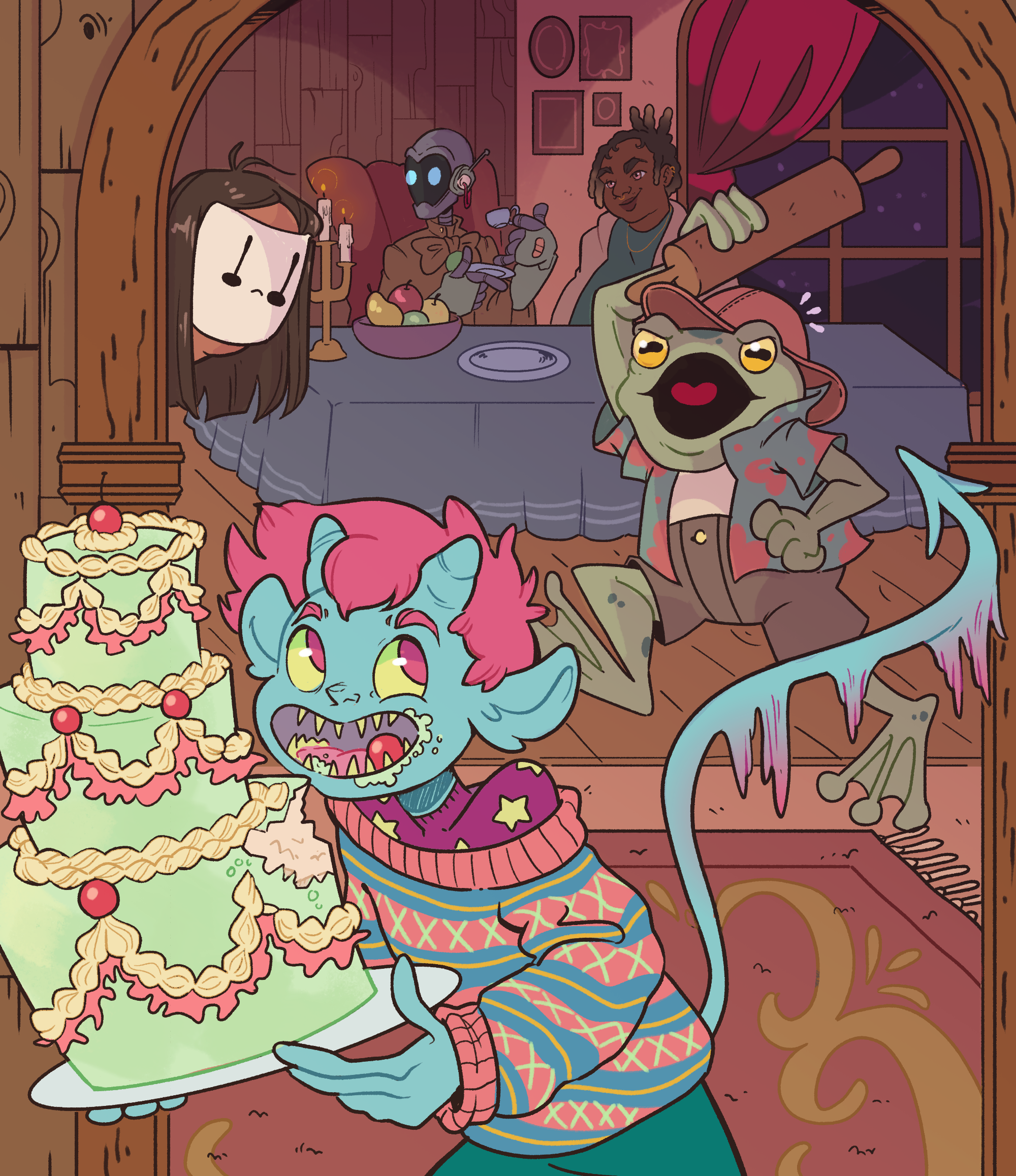 “None of us were planning for its massive success,” Dragon admits, “but I’m really grateful the game resonates with so many people. It was actually kind of a huge panic, because one of the easiest ways a company can go under is from growing too big too fast. We really spent those first few years working to make sure we weren’t in danger of overgrowth. It definitely changed the trajectory of my life!”

Whilst Wanderhome may be the biggest RPG we recognise Dragon for, if like many RPG fans, you purchased the huge Black Lives Matter bundle on Itch.io in 2020, you’ll find that perhaps you knew of Jay Dragon and Possum Creek Games before you realised. Though it’s easy to lose track of great names that appeared in that list, Sleepaway, where you play as a camp counsellor at a not-so-ordinary summer camp besieged by a Strange and ominous cryptid, was our own first encounter with Jay Dragon’s work. Both run on the Belonging Outside Belonging System, which is both Diceless and potentially GMless.

Yazeba’s Bed & Breakfast, now available to pledge for on Indigogo, in fact, predates Wanderhome, and even Sleepaway’s availability, having begun significantly before the pandemic.

“I wrote Wanderhome while on break from the B&B.”, Dragon tells us. “My co-creator M. Veselak and I have been designing mechanics and concepts for it since November 2019 — We’ve grown a lot over the past 2 ½ years, with an expanded writing team and an incredible art team, but a lot of it is still about bouncing ideas back and forth.”

That brings us to today – just ahead in time for its crowdfunding journey, and with questions of what we can expect from it.

“Yazeba’s Bed & Breakfast is a slice-of-life TTRPG about a magical home in the woods and the community that has grown up there. It’s about these pre-generated characters (Parish, the frog chef; Yazeba, the heartless witch; Hey Kid, the demonic adopted child) playing low-stakes episodic adventures, which it then all ties together with its legacy mechanics and stickers. So, if you and I go firefly catching with Sal and Hey Kid, we might unlock a guest that someone else plays when I run it with my home group. And over time these characters grow through long-term journeys until they become entirely unique.”

In this world, it’s always September 15th, and there’s always room for a new visitor, offering a home to cursed frog knights and rabbits who wear little outfits, of aspiring rockstars and spaceships carjacked from the Moon Queens Palace.

It’s another game that encourages you to settle down, unpack your bags, and enjoy the whimsy – that fun-just-because-its-fun, low peril, playful style that encourages you to find the magic in the situations. Though Dragon began writing as a horror writer – “my first few games were miserably grim” – the feel-good factor soon prevailed. “I wanted to write games that made me feel good, and so I started to play more and more with whimsy and the aesthetics of nostalgic childhood. But I think there’s always horror hidden inside the whimsical (just as much as there’s a certain cosiness to horror) and some of our writers really embrace that.”

We comment on the welcoming side to the games, lacking in confrontation and simply encouraging participation, a fact that was “absolutely” intentional.

“A lot of folks who work at Possum Creek have done early childhood education or spent a lot of time teaching games to kids, and so we really understand the importance of a game text meeting its reader on their level. There’s a particular trend in some game design circles of expecting high levels of engagement and focus from all its players, and while I totally respect designers who take that approach, it’s not something I can write or make it through a campaign of. We believe there’s a lot of ways to play a game, and we want to leave our games open to all of those.”

Part of this of course, includes how appealing the art direction is within Possum Creek Games, and this includes that within Yzeba’s Bed and Breakfast. As part of the lead up to the funding, an image of the B&B itself was released, which seemed to be the kind you could look at again and again and see something new everytime.

“That is all Ruby [Lavin].” Dragon effuses, “She is the artistic director, and an absolute genius when it comes to finding artists and advising them. We have a lot of overlapping visual language, so when we were planning the aesthetic for Yazeba’s B&B we met together for days, flipping through old children’s books and talking about which aesthetic inspirations we wanted to pull. The artists on our team have a mix of styles, from 1960s deco to Adventure Time. She wanted to create the sense of a shared, unknowable childhood — one which you could taste at but never reach. She was also responsible for picking all the beautiful art in Wanderhome.”

And whilst these may represent a calming, nostalgic vibe in all aspects, Possum Creek Games isn’t afraid to take a more difficult stance where it’s needed. Its website contains a mission statement, of being more than just a publishing company 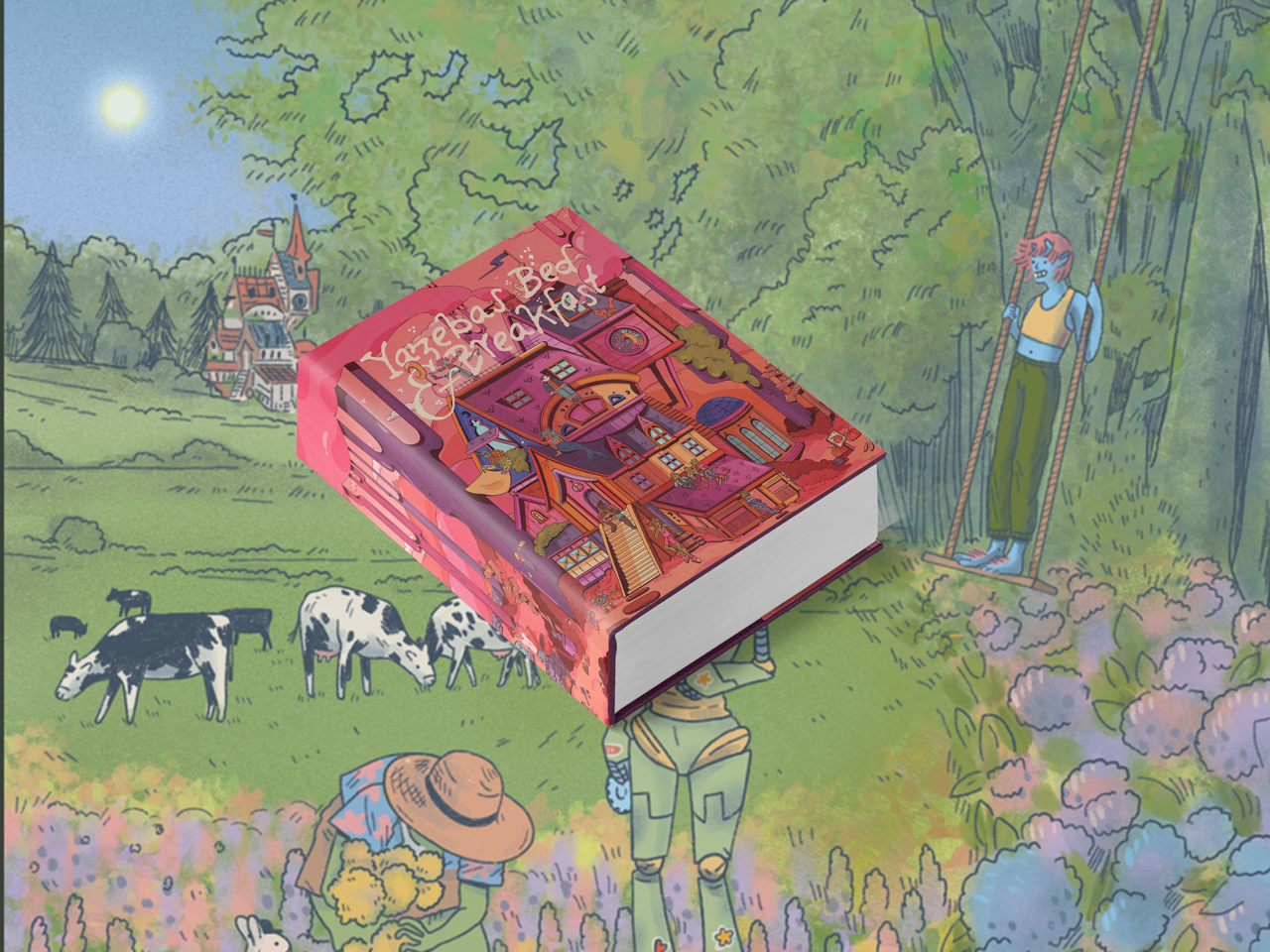 “I myself am very openly trans and queer,” Dragon says, when we ask more about this, “which means my writing embraces that. We focus pretty hard on the joy minoritized communities experience and the stories that our communities don’t normally get to tell. It helps us connect with new audiences in TTRPGs and I’ve found our more traditionalist fans are grownup enough to listen and excitedly learn.

In addition, Possum Creek Games notably took a stance on Kickstarter’s treatment of creators and blockchain decision earlier this year, choosing to take Yazeba's Bed & Breakfast to Indiegogo instead. Whilst Indiegogo is a similar platform, in that it offers viable space for crowdfunding, it’s not been particularly utilised by the tabletop industry.

“We swapped to Indiegogo because they took a harder stance against crypto, offering us a better marketing package, and we wanted to send a message to Kickstarter that creators are not a passive income source”, Dragon summarises, after explaining the lack of detail in Kickstarter’s move to blockchain, and the underlying tenant of apathy towards its creators.

“We spent weeks doing the research and deliberating over best options — I made a spreadsheet of every single project we’ve run and how much it owes to Kickstarter’s ecosystem. If it was just me the choice would have been easy, but we have a dozen people working on the project and I couldn’t play blackjack with their paychecks. We found we are actually on the lower side of the bell curve of creators, and that combined with our large core audience meant that switching seemed risky but feasible.”

Part of this, Dragon explains, is that there were limitations as a result of agreements with platforms like BackerKit, but found that Indiegogo was the best fit for the size, content and audience. Certainly, the game funded in just one hour, and sits at over 500% of its funding goal at the time of writing.

Finally, if the tabletop wasn’t enough, it’s joining with One More Multiverse, to create a digital companion. You can check this out for yourself, with all sorts of fun pledge levels, and pick up your own copy – over at Indiegogo.