Bootleggers, Stetsons & Chicago Pianos – It's Gang Warfare in this Scenario I don’t want to die in Texas: Chicago maybe... With words by Chris Swan and pictures by John Treadaway

In 1996 Bruce Willis stared in a gangster movie called Last Man Standing. Set in 1932 the story takes place in Texas during the Prohibition era where Willis’s character, a gun-for-hire called John Smith, finds himself in the middle of an ongoing war over “booze smuggling” between an Irish gang and an Italian gang in a rundown border town called Jericho. The movie is effectively a remake of A Fistful of Dollars but owes its origin to Akira Kurosawa’s movie Yojimbo. Oh, the quote comes from Christopher Walken’s character in the movie, Hickey, a psychotic gunman just before he tries to kill Willis.

The great social experiment called Prohibition on which America embarked in 1920 has led to a huge number of movies either glorifying or demonising the gangsters and law enforcers who ended up fighting for control of the streets of American cities and the hearts and minds of its citizens. It also makes for great games, sometimes in unusual settings away from the mean streets of Chicago.

Many social reformers thought that alcohol was a major contributory factor in crime and in January 1920 they managed to push through the Volstead Act introducing Prohibition into America. This soon led to the smuggling of alcohol known as “Bootlegging” after a term first coined in Nebraska in 1889 when alcohol was smuggled to Native Americans inside tall boots.

Soon a profitable and often violent black market for alcohol grew in which organised crime flourished. By the time of the Volstead Act’s repeal in 1933 many criminal organisations had made a fortune and developed into so called criminal families many of which allegedly still exist today.

Since selling privately distilled or smuggled alcohol was illegal and meant that no tax was paid on it law enforcement officers relentlessly pursued the criminals manufacturing and supplying it with over 1,500 Federal Prohibition Agents also called “revenue agents” or “revenuers” tasked with enforcement.

Texas was one area where smuggling was rife due to its long border with Mexico. In 1932 the Rangers backed Governor Sterling in his re-election campaign and when controversial politician Miriam “Ma” Ferguson was elected Governor in January 1933 and 40 Rangers immediately resigned. She then dismissed the remaining 44 Rangers replacing them with inexperienced appointees some of whom had criminal records and all of whom proved to be ineffectual at their job. As a result Texas became seen as a safe hideout for the many Depression-era gangsters including Bonnie and Clyde, George “Machine Gun” Kelly and Pretty Boy Floyd. However, in August 1935 the newly reformed Texas Rangers were merged with the Highway Patrol to create the Texas Department of Public Safety and once more became an effective and efficient law enforcement organisation. 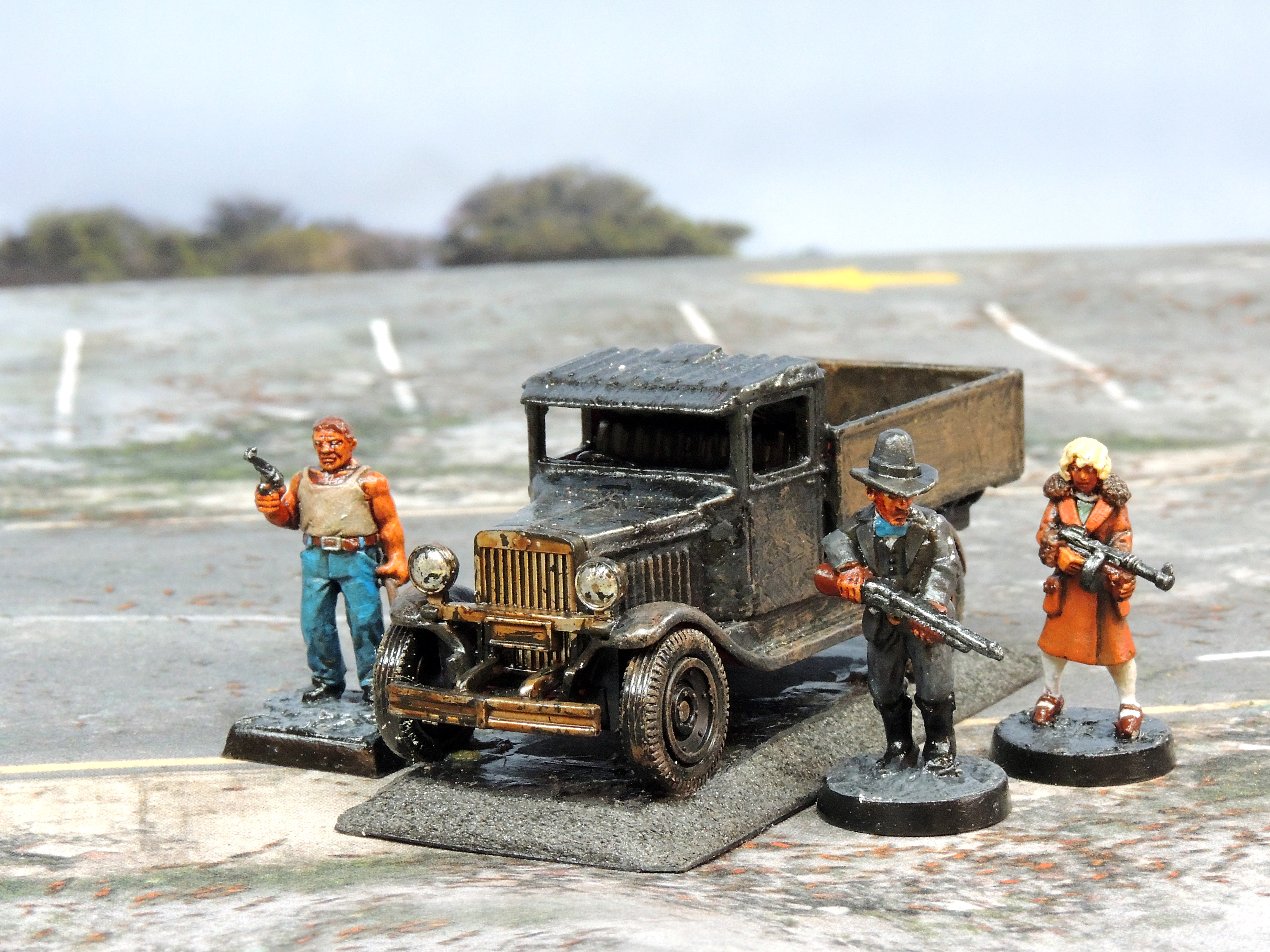 During Prohibition both criminals and law enforcers were well equipped with firearms, usually automatic pistol or double action revolvers although some single action revolvers were still in use. Shoulder arms were mostly bolt action or lever action rifles and carbines, some of which were cut down to make concealment easier. Shot guns were usually single barrelled pump action versions with most double barrelled shotguns being cut down for use as “sawn off” weapons.

Of course the most iconic weapon of the era was the Thompson, the first weapon to be officially called a “submachine gun”. Known by many names including “the Tommy Gun”, “the Chicago Typewriter”, “the Chicago Piano”, “ the Drum Gun”,” the Chopper”, or simply “The Thompson” it found fame and infamy during Prohibition era America. A longer ranged automatic weapon was the Browning automatic rifle or BAR. With an effective range of up to 1,000 yards it was first used in action by American forces on 13th September 1918 and was designed to be fired by infantrymen using a sling over the shoulder to support it or by firing from the hip. They were used by criminals and law men alike, with Clyde Barrow of Bonnie and Clyde fame being one such user.

Added to these firearms were a plethora of brass knuckles, coshes, clubs and knives, in fact anything which could inflict both lethal and non lethal injuries.

So to reflect the period and capture the situation in Texas I have invented the west Texas town of Conroy. It lies a few miles from the Rio Grande and serves the local rancher and farmer community. It has no law officer as the locals settle their own arguments but when necessary the County Sheriff sends in deputies if a real crime occurs.

The town was set up on a 4’ x 4’ table laid out as shown in the plan. We used our existing Old West buildings with a few temporary adaptions such as revised signage, period posters, telephone poles, steer lamps, etc. We also added a roughly 30mm scale Gas Station made for the Disney Film Cars which I picked up in charity shop. It had the right period look and just needed a little painting to dull the colours down. 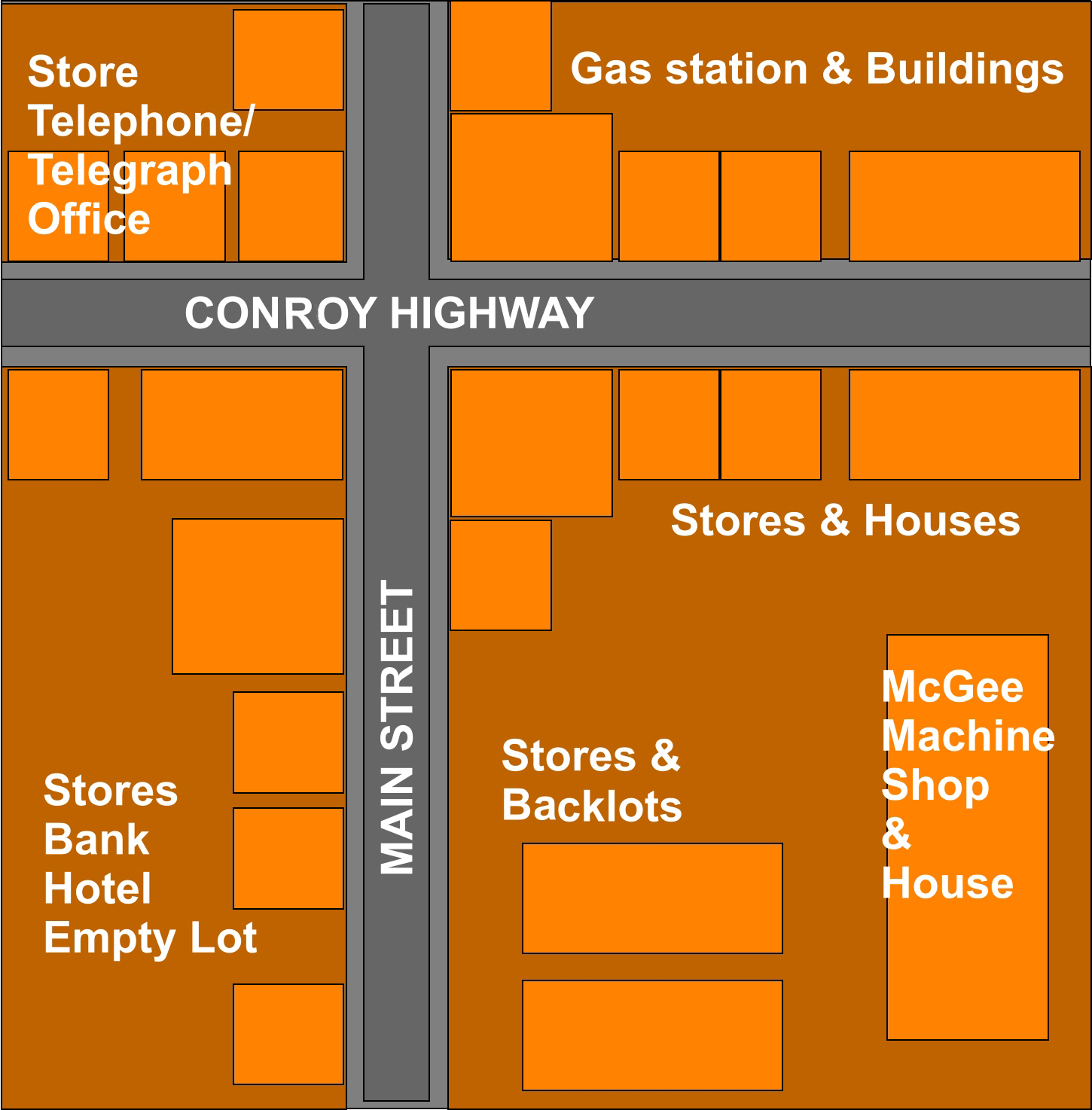 The rules we used for these games were our own Quick on the Draw rules insert link tabletopgaming.co.uk/downloads with additions for games set in the 1920’/1930’s. These can be found on the magazine’s web site together with some generic characters for the period. However, the games can equally be played with any set of gangster rules such as The Chicago Way, Mad Dogs with Guns or Pulp Alley or 7TV with its new version TV Pulp. 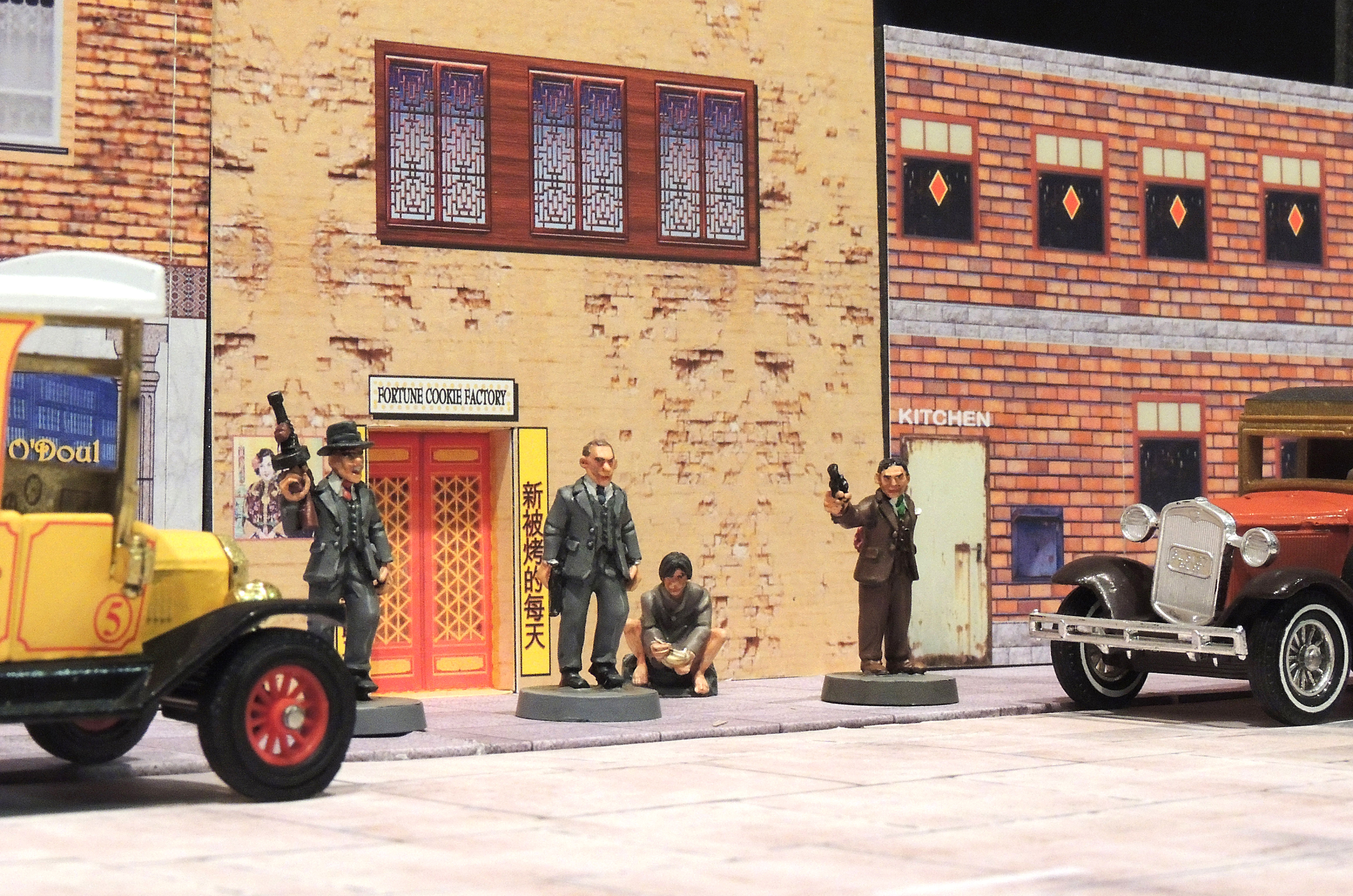 In Conroy the locals pay lip service to prohibition but everyone knows where to go to get their booze, the McGee family. A close knit clan they have cornered the market on smuggled alcohol from Mexico due to family ties across the river and supplement this with booze from their own stills run out of their more legitimate blacksmithing and farm machinery business.

That is all about to change as men from the “Windy City” have arrived with a view to a hostile takeover of the McGee’s operation. Having paid off and intimidated local county officials the Falcone Mob has been given a free hand to deal with the McGees.

The Mob arrives in town in two cars and turn into Main Street heading for the McGee’s place of business. The player controlling them can decide who is in which car. Four of the McGees, player’s choice, begin in the yard outside of the business with the three remaining members of the clan scattered randomly around town but with 24” of the business. 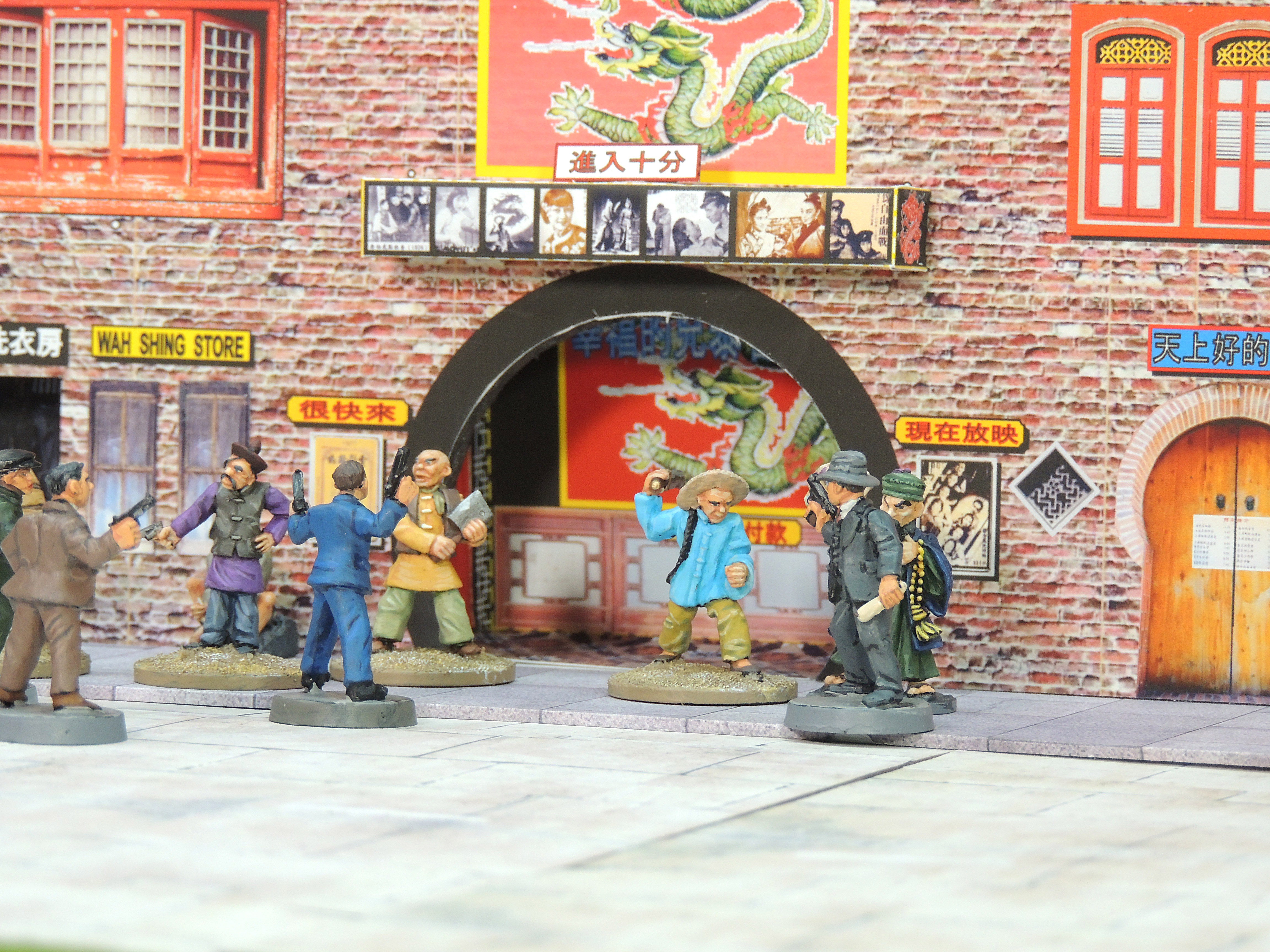 Whichever side won the first game is now in charge of the bootlegging business but despite the winners ” influence” with local politicians the bloodshed caused has led public opinion to demand that the State Capital send in the Rangers to restore order.

The Rangers have arrived by car and are standing by the hotel. The winners of the first game have been assured by their political “friends” that they have nothing to fear if they resist arrest as they will ensure they get to a rigged trial. So they are gathered by the McGee’s business ready to defend their property. Of course the Rangers don’t know that and all bets are off if anyone gets shot! 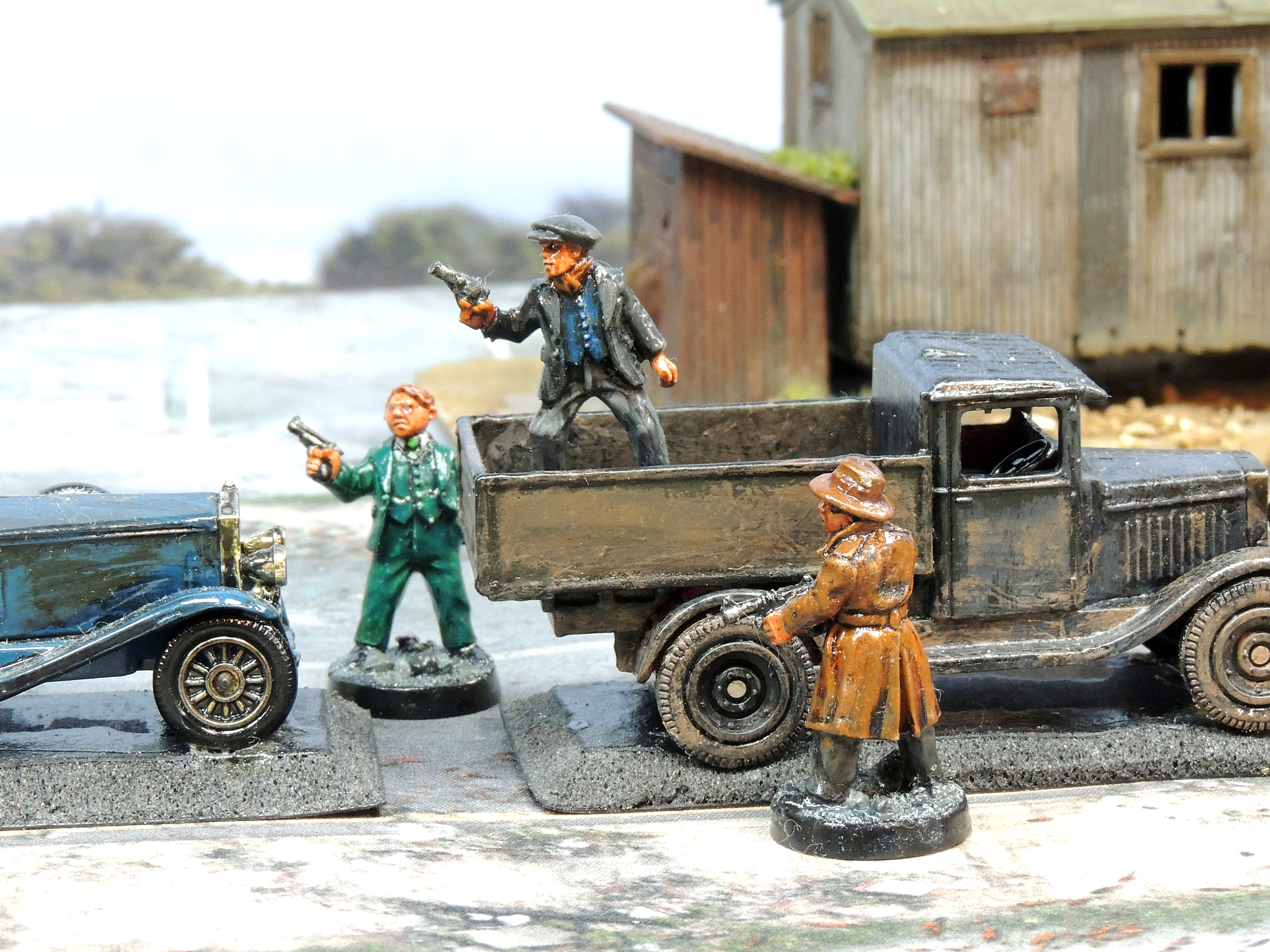 GAME 3: I WANT TO MAKE A CASH WITHDRAWAL!

The infamous Byrd Cage gang led by Johnny Byrd and his psychotic gun moll Frankie Cage have been sweeping through the state robbing banks and stores accompanied by their sidekicks ‘Baby Face’ Bobby Barlow and ‘Folsom’ Earl Polanski. Their next target is the bank in Conroy which as they believe the town has now lawmen in it.

Unfortunately for them the Rangers are still in town. 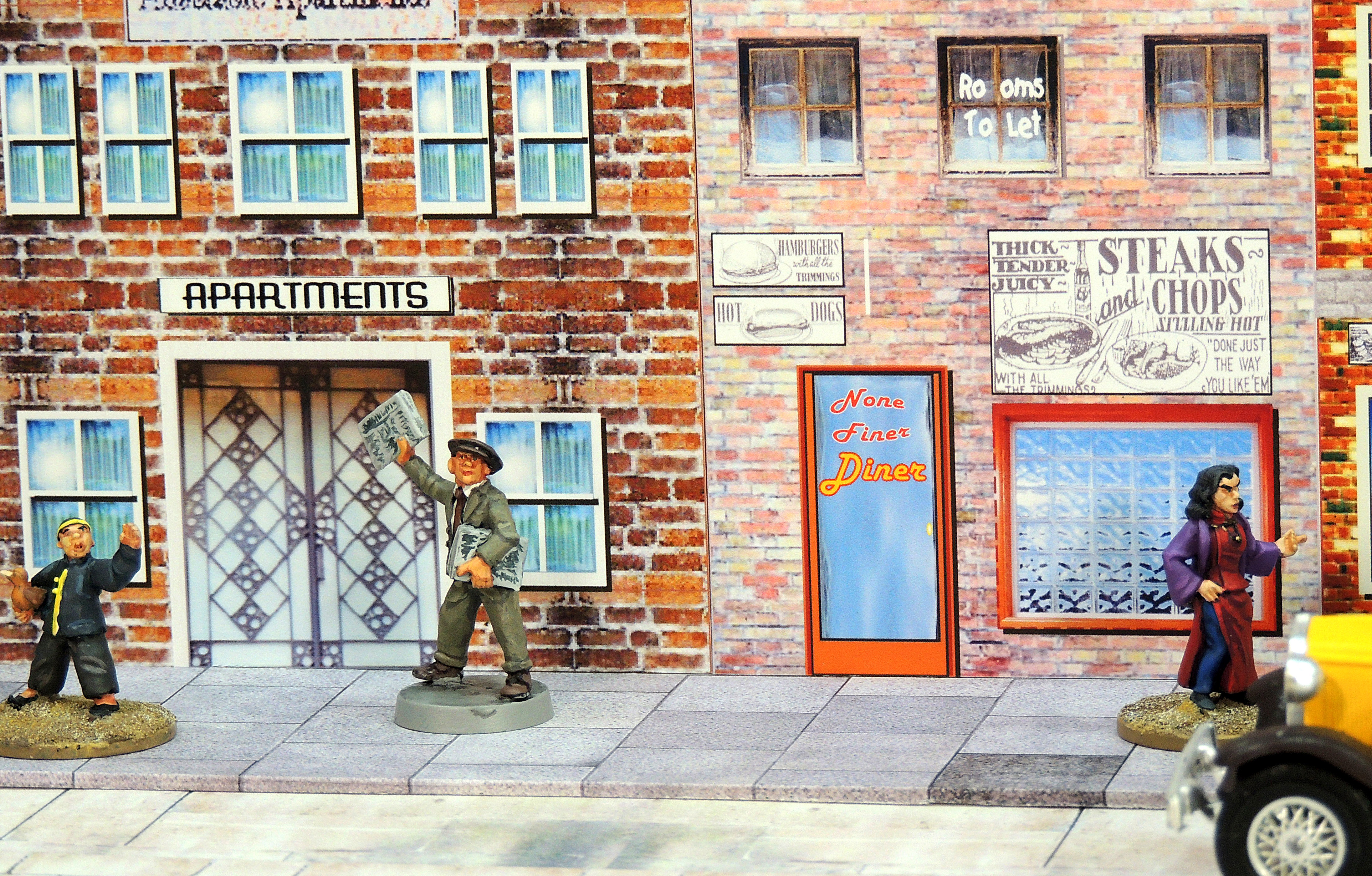 The gang arrive in town in 1 car and drive along Conway Highway towards Main Street where the bank is located. If the car passes a Ranger they make an observation roll using Reduced Dice to see if they recognise its occupants (the car is dusty and seeing the occupants clearly is very difficult).

Any Rangers within sight of the Bank may make an observation roll to see if they recognise the robbers.

All three of these games are played in the town of Conroy which obviously has a number of citizens. For each game place between 6 and 10 citizens in and around the town and once violence breaks out roll 1d10 to see what they do

If any of the citizens decide to attack then use the following profile:

AM I GOING TO DIE? 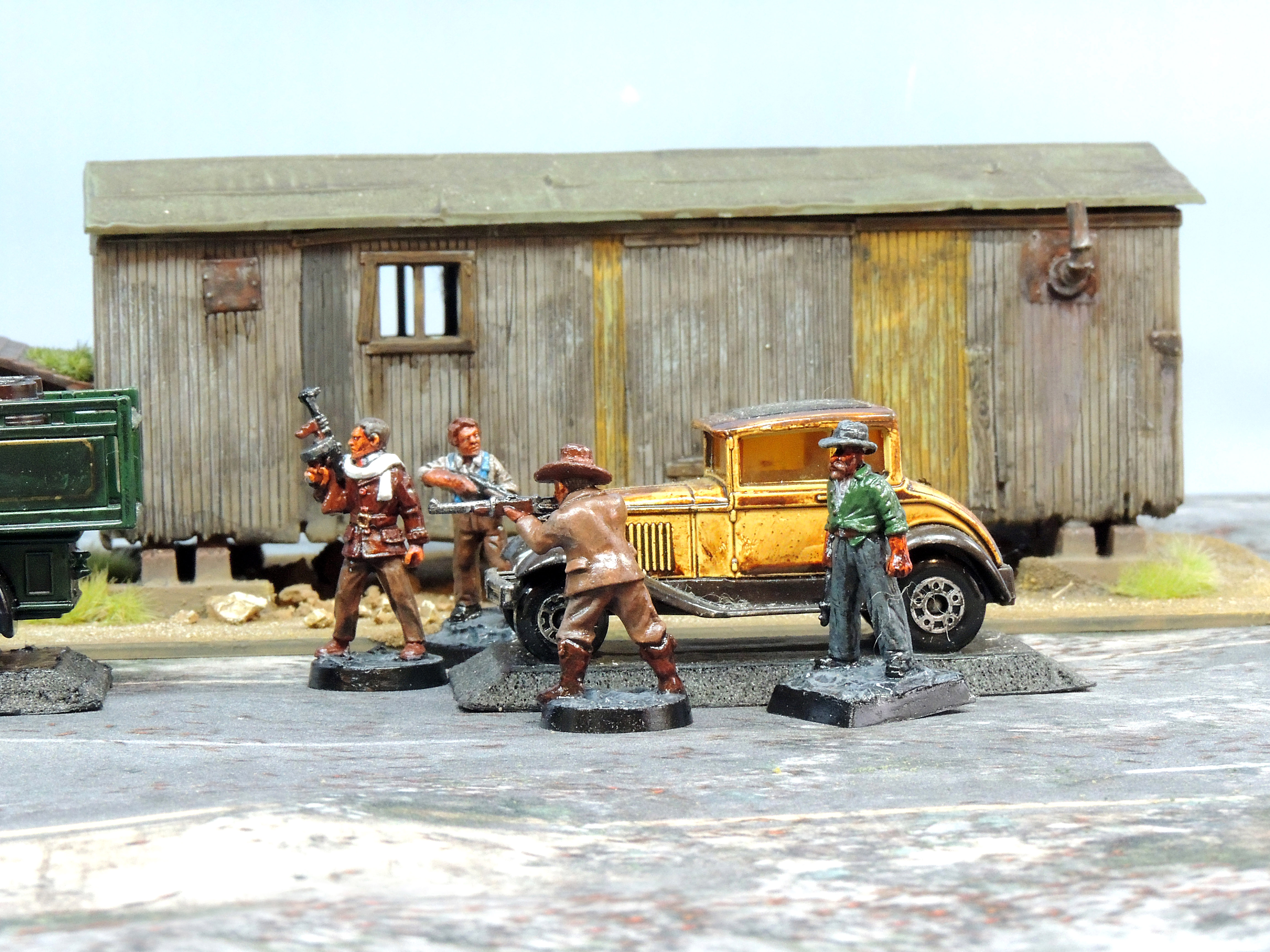 Roll their action dice and check the outcome. Tough characters or those with access to a trained medical practitioner may reroll their dice but keep the second outcome. 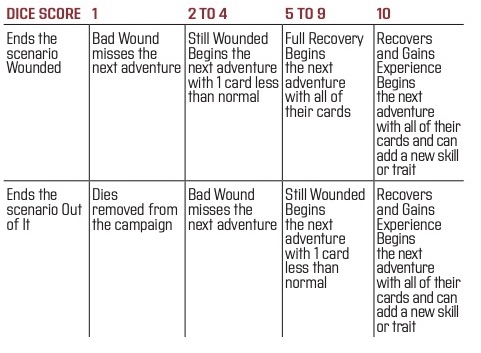 If a character dies or is unable to play in the next adventure, the side which lost the character may recruit one minor character as a replacement for each card the missing character would have had –e.g. if it was a main character with 3 cards add in 3 temporary characters . These are cheap punks, hired muscle or inexperienced law men. If the wounded character returns then the temporary character(s) leaves.

These games need only a few figures to play so even if you don’t yet have any suitable figures the outlay to get some is not huge. In 15/18mm Blue Moon Manufacturing sold through Old Glory has six sets of figures as well as city buildings for gangster style games. However, we played these adventures in 28mm and players have a wide selection of manufacturers to choose from. The biggest ranges come from Pulp Figures, Copplestone Casting and the Chicago Way range. Blue Moon Manufacturing and Dixon Miniatures both have suitable figures together with vehicles and Gorgon Studios has a small but beautifully crafted selection of figures.

As the setting for these games is Texas you can use your existing Old West buildings with a little temporary adaption or any of the buildings from suppliers such as Sarissa Precision or Sally 4th whilst 4Ground make an excellent range of 1920’s buildings.

So, grab your Stetson, snap the brim of your Fedora and play your Chicago Piano – will you continue to bootleg your booze or will you try to make a hostile takeover of a family business? Will you succeed in enforcing the law? Only you and the Gods of the Dice will decide. Happy Gaming.

This article originally appeared in issue 456 of Miniature Wargames. You can pick up your issue of the magazine here or subscribe to make sure you never miss another issue.