Think running a miniatures business sounds like hard work? Try running a business making bits for miniatures! We talk to Joel Pitt about how Anvil Industry did just that.

Wargaming as a profession is an uphill struggle, no bones about it. Law, accountancy, software development, medicine; compared to these paths making a living from little toy soldiers looks like an immensely improbable – and dismal – proposition, with long hours, low pay and the perennial threat of job insecurity. Whilst Games Workshop, the undisputed titan of tabletop amusement, has posted record profits over the last few years, the idea of anyone else turning a handsome buck seems in such a relatively small sector hard to believe. So it is even more extraordinary that there can exist companies yet still more niche. This is the curious world of ‘bits’; cosmetic gubbins and add-ons used to enhance or alter existing miniatures. Originally a purely personal aspect of wargaming, this sub-element of the pastime has evolved to such an extent that it now supports its own businesses. One of the larger operations is Anvil Industry, a London-based company of a dozen staff founded by Joel Pitt. We recently caught up with Joel to uncover how he went about earning a crust from his hobby. The answer, we learnt, was with a lot of hard graft.

A GUY IN A SHED

One of the most intriguing questions is  how exactly something like Anvil Industry took off in the first place. Like quite a few businesses, Anvil Industry was  the  result of an attempt to turn a hobby into a source of income, and like many more, started life with a single employee working in confined spaces. In 2010, Pitt was living in his parent’s house to work on business idea revolving around making technology products for cocktail bars. The idea didn’t take off, and Pitt began fishing around for another way to make an income.

“The idea I had wasn’t going to make me any money any time soon, and I’d quickly discovered that I needed a secondary source of income,” recalls Pitt. “Having been a long-time wargaming hobbyist, I started selling accessories for miniatures – I was selling them on eBay and manufacturing them in my parent’s garden shed. And it quite quickly became apparent that this was making more money than the bar business so I canned that idea.”

With that, Pitt dedicated himself to becoming a full-time wargames accessory manufacturer. The initial few months were a decidedly low-key affair, though slowly and painfully Pitt worked his way up the difficulty curve of learning the technical side of making miniatures.

“It was very basic,” he says. “I started off hand-sculpting everything, using a combination of plastic card and plastic rod and Milliput – the oldschool methods. I was never very good at that, and realised quite quickly that computer was the way forward. So initially I worked with a few other people who knew how to do it – I’d send them a pencil sketch and they’d send me back a CAD sculpt. a process Then I taught myself do to CAD sculpting essentially  by of trial and error and swearing at my computer until it did what I wanted.” 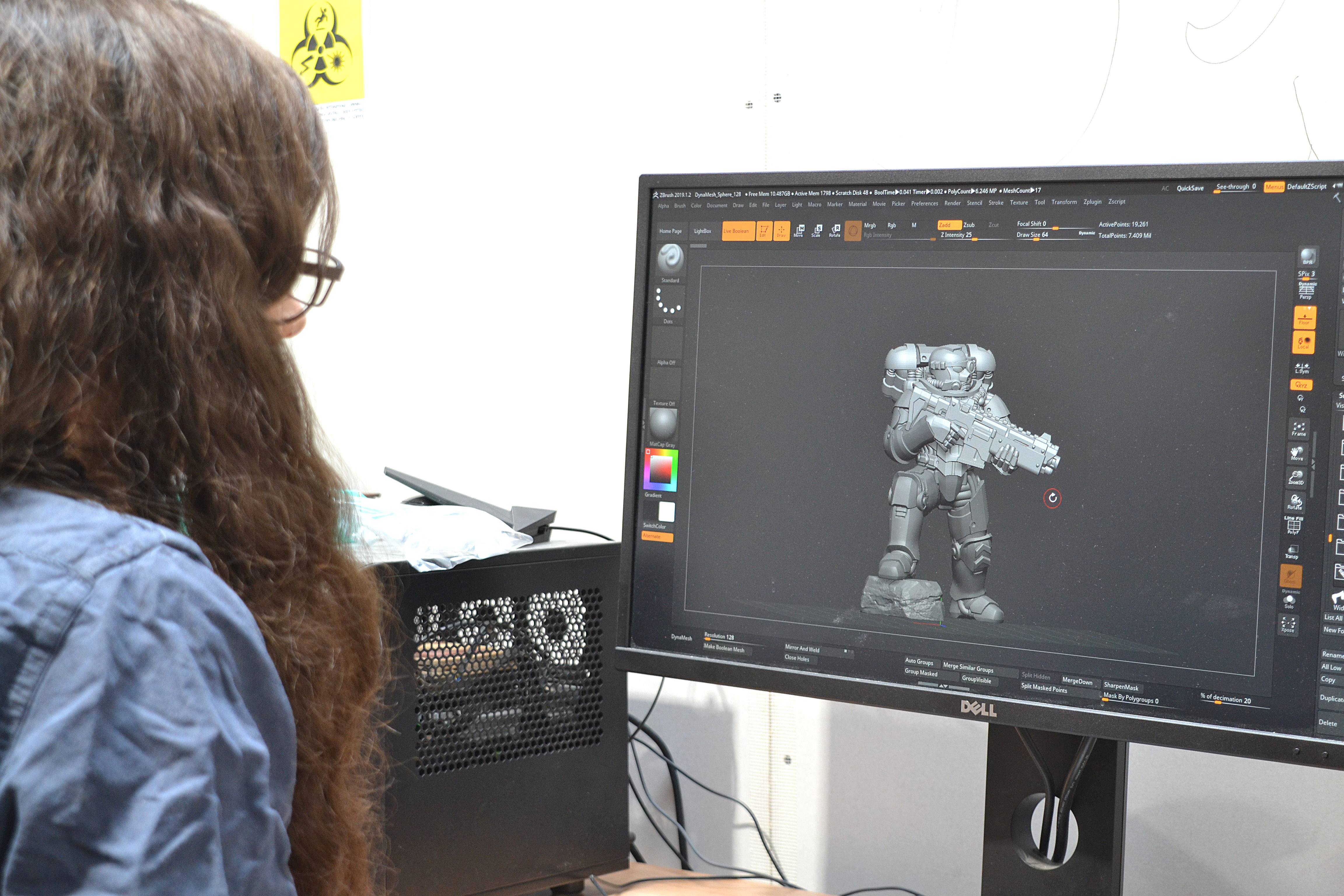 Six months after Anvil’s initial inception, as Pitt slowly learned the arcane art of digital sculpture design, he recruited an old school buddy – Charlie Rawnsley – to come on board. Rawnsley had been working part-time at a local college and had originally been lending a hand with photographing the products and getting a website set up. Pitt went into business with him and the operation began to take off. In 2012 the pair moved to London, renting one, and later two, studios in Trinity Wharf.

The next few years saw the gradual expansion of the team as Anvil Industry made a name for itself in the wargaming space and brought the technical elements of design inhouse.

“It’s been a journey of starting by hiring freelancers design stuff, then learning the skill yourself, then paying other people to make bits, then buying the machinery and manufacturing it all yourself,” explains Pitt. “We’re only now at a point after eight years where we’re completely self-sufficient; from the first pencil sketch to the finished product going out the door we do everything in one building, and that gives us complete control, letting us keep the quality high and the lead time fast.”

The real turning points for Anvil Industry came in 2016, when it launched its innovative regiments system. A range of heads, torsos, arms, legs, weapons and accessories for 28mm scale human infantry, the regiments system was designed to be completely modular, allowing for a range of exotic and unusual infantry miniatures. Choosing from hundreds of different parts, wargamers can create such unusual combinations as Prussian-era jetpack troops, World War One-esque Tommies with plasma carbines or tricorne-sporting redcoat mercenaries armed with Kalashnikovs and grenade launchers. The range proved so popular that Pitt estimates that it now makes up roughly 70% of Anvil Industry’s sales. At the same time, Anvil has also managed to navigate the thorny world of Kickstarters.

“There’s sort of two wargame Kickstarters,” explains Pitt. “You’ve got the very small startups that are doing a Kickstarter to essentially launch their business and there’s a lot of danger of running out of funds – you hear horror stories where pledges are never delivered and so on. We’ve always been in the other group, which is companies who already have a sustainable product range and are using Kickstarter to raise revenue to develop a new product line. We’ve always been able to use revenues from our regular sales to support our Kickstarters so we’ve never had financial worries in that sense.”

Nonetheless, Pitt cites the three Kickstarters Anvil Industry has run as the most challenging aspect of the business.

“there’s always that high at the beginning where you’re like, ‘well, yes, we’ve got all this money upfront and that’s great.’ And then the realisation sort of sinks in that you’ve inevitably bitten off a bit more than you can chew and you’ve got this huge mountain of orders. It does get a bit soul destroying when you’re in the middle of shipping and there seems to be no end in sight.”

THE ART OF THE CAST

Since the beginning Anvil Industry has specialised in making resin bits and miniatures.  Like all materials, resin brings with it its own challenges, and the journey from initial concept to finalised product is a complicated and technical one. Any idea first starts out as a piece of concept art – a pencil sketch from either Pitt or one of the design team. After that, the images is created digitally using CAD (Computer Aided Design) software, being compared with existing digital aspect to ensure that the level of detail and scale remains consistent.

After being designed in the virtual world, the item is given life in the physical one by way of a high resolution 3D printer. As well as any possible minor imperfections, this 3D printed version – known as the master copy – will also be surrounded by support structures created during the 3D printing process. These structures have to be removed, an arduous process in of itself.

“We use files and knives and it’s very detailed, painstaking work,” explains Pitt. “You know, one gun can take half an hour to an hour to prepare for casting because it’s going to potentially be duplicated thousands of times, so it has to be as perfect as possible. We really have to put in the time at that stage to get the quality right.” 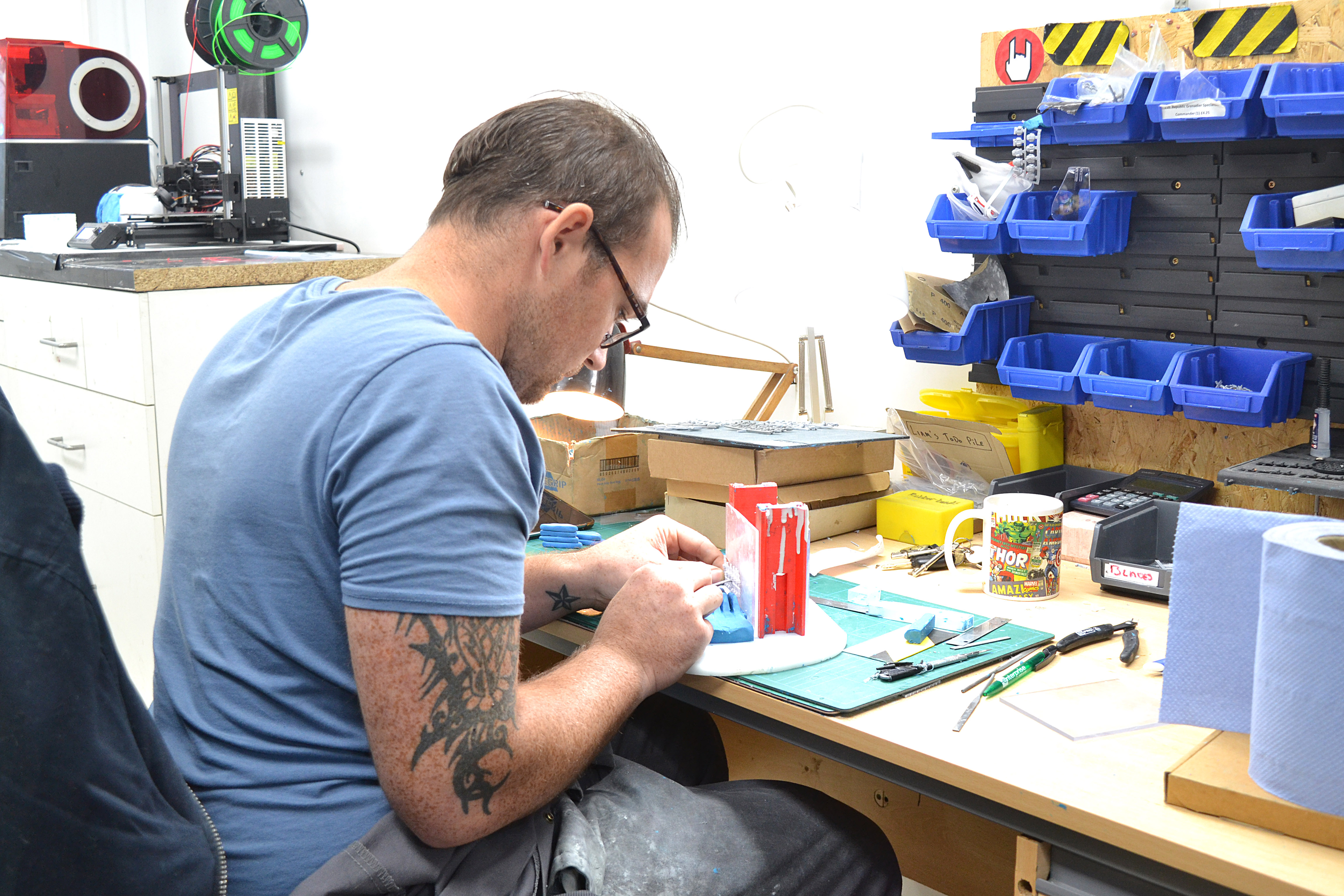 When it’s finally ready, the master copy is then set on a stand in a box in order to make a master mould. Silicone rubber is then poured into the box; after the rubber sets, it’s gently cut open with a knife and the master copy removed. A two-part liquid polyurethane resin is then mixed together and poured into the master mould to create several copies of the item in question. Vacuum chambers and pressure pots are used at this stage in order to remove the bubbles that get trapped in the liquid resin, allowing for near-flawless casts. When four or five copies of the item have been created, they’re lined up on a sprue and further molds are cast from that. These are the production moulds, which allow for multiples of an item to be cast instead of just one at a time. It’s these production moulds that are used to create the actual products consumers buy, and are the reason that Anvil (and other resin casters) can keep up with demand. As a general rule of thumb, Pitt estimates that it would be possible for Anvil Industry to create around 40 or 50 sprues of a given item over the course of an average working day, although at maximum capacity it would be possible  to double that. Demand varies across their range; some bits will only need 10 sprues for a month’s worth of sales, whereas others (ankle-length greatcoat legs, for example, are one of their most popular products) need to be manufactured almost constantly. 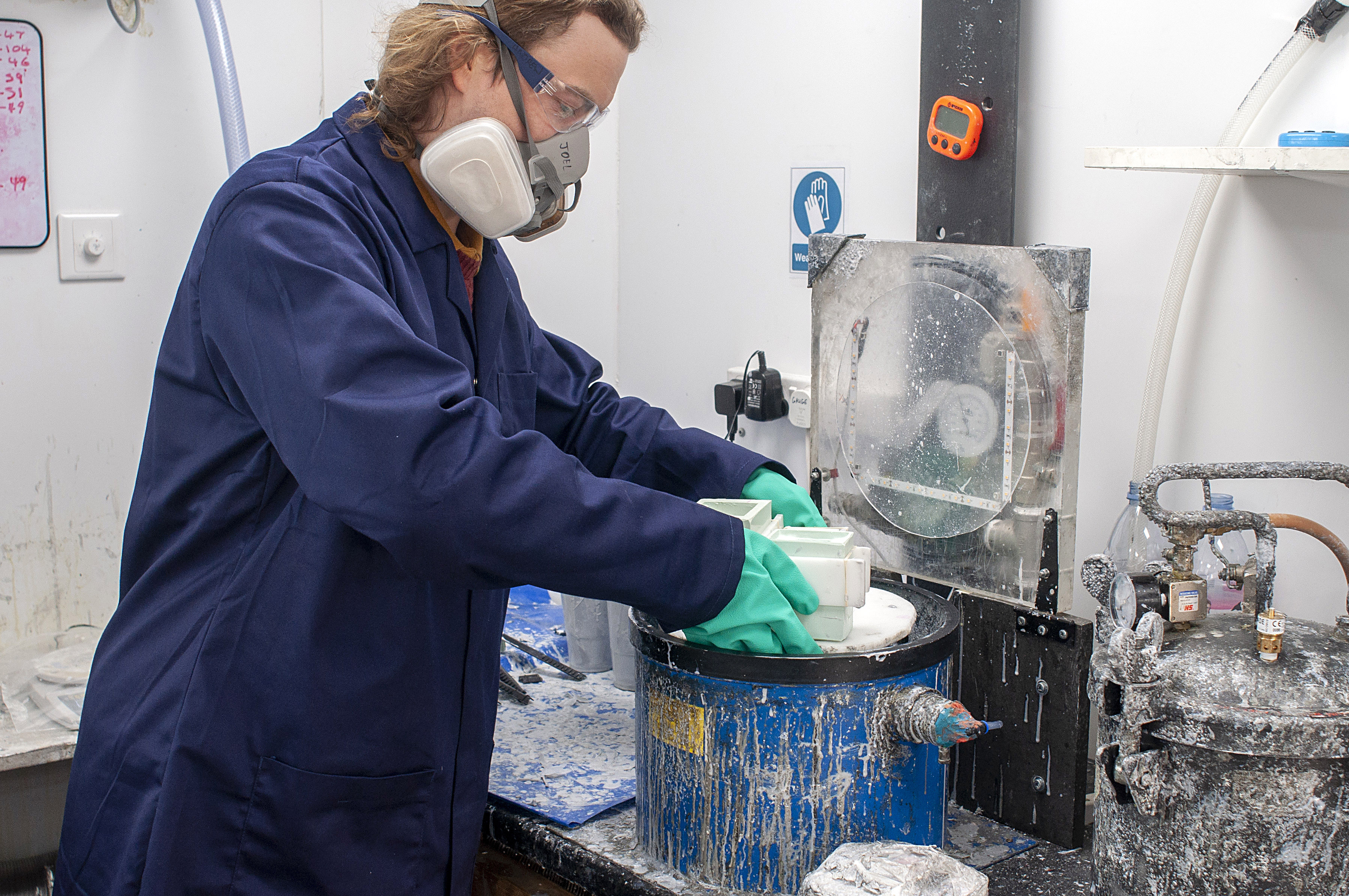 One of the most prominent features of Anvil Industry’s story is how much hard work has had to go into making a viable business out of a product that at first glance seems so deceptively simple.

“I’ve worked very, very hard for these last eight years,” says Pitt, “and ultimately I’d like to work a little less hard because my work-life balance is a bit messed up. I’d like to spend more time on actual hobby time. If we can get the company to the point where it’s sort of self-sustaining, where it runs itself, that’d be good.”

In the meantime, Anvil Industry is as busy as ever. The company has recently moved into new premises, and was in the middle of renovating the place at the time of interview. In the long run, they hope to be able to open up the office as a small shop-cum-gaming-space, where members of the public will  be able to come in and interact with staff directly. They’re also introducing an electronic stock taking system that’ll allow them to keep track of product quantities in real time. Above all, the line of new products coming out keeps on growing, as miniatures from a recent Kickstarter become available and new ranges are designed. It’s tough work, but Pitt maintains that the workload is worth it.

“Running your own small company is really hard work, and it’s frequently poorly paid, and there have been some times when we’ve been genuinely worried about the state of the business,” he admits.  “Demand for our products fluctuates and the industry’s changing all the time so we’ve had to adapt to that. But there’s also that excitement that comes from running your own business;  you deal with all the negatives, but you also benefit from the positives. So if the business is doing well it’s because of what you did and the decisions that you made. I take great pride in being there for hobbyists who want a particular component they can’t get elsewhere, and knowing that their recreation is enhanced by the products we offer.” 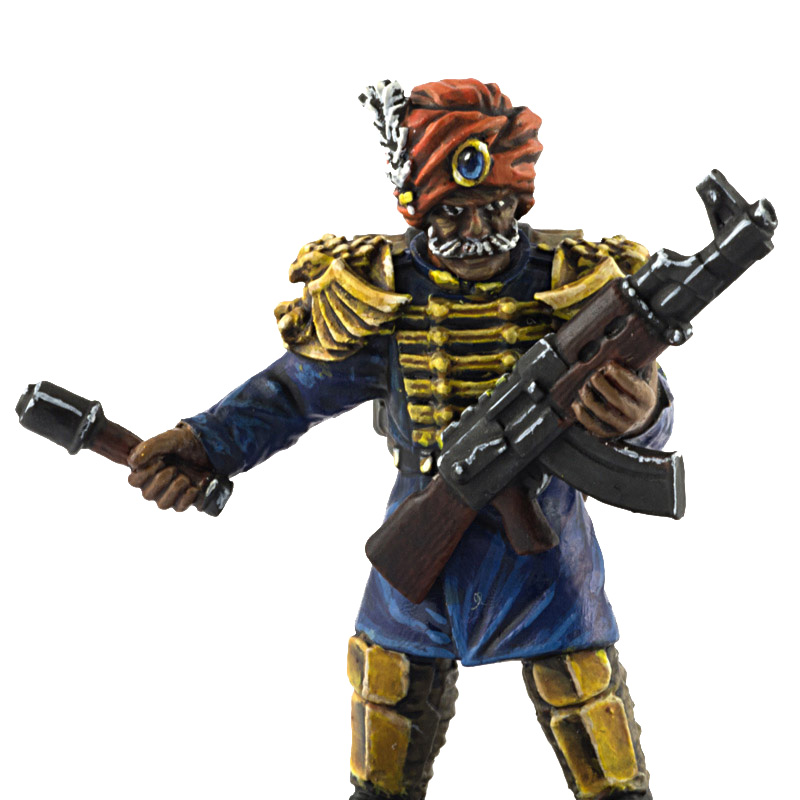