An Interview With Steven Smith about Bolt Action: Korea Often overlooked amidst the slaughter of World War Two and the angst of the Vietnam War, the Korean War is frequently referred to as America’s ‘Forgotten War’. Yet of these conflicts, it is the Korean War of 1950-1953 whose effects are still felt most keenly today. Indeed, it is a war that is technically ongoing, the Communist dictatorship of North Korea having never formally announced the end of hostilities. As the regime continues to pursue its nuclear weapons program and its ally China butts heads with the US, it often seems as though this conflict of yesteryear may yet pave the way for tomorrow’s war. In this febrile environment, Warlord Games’ new Bolt Action: Korea campaign book is taking the fight east to the Land of the Morning Calm. We chat to the book’s writer Steven Smith about designing a campaign in this new setting. 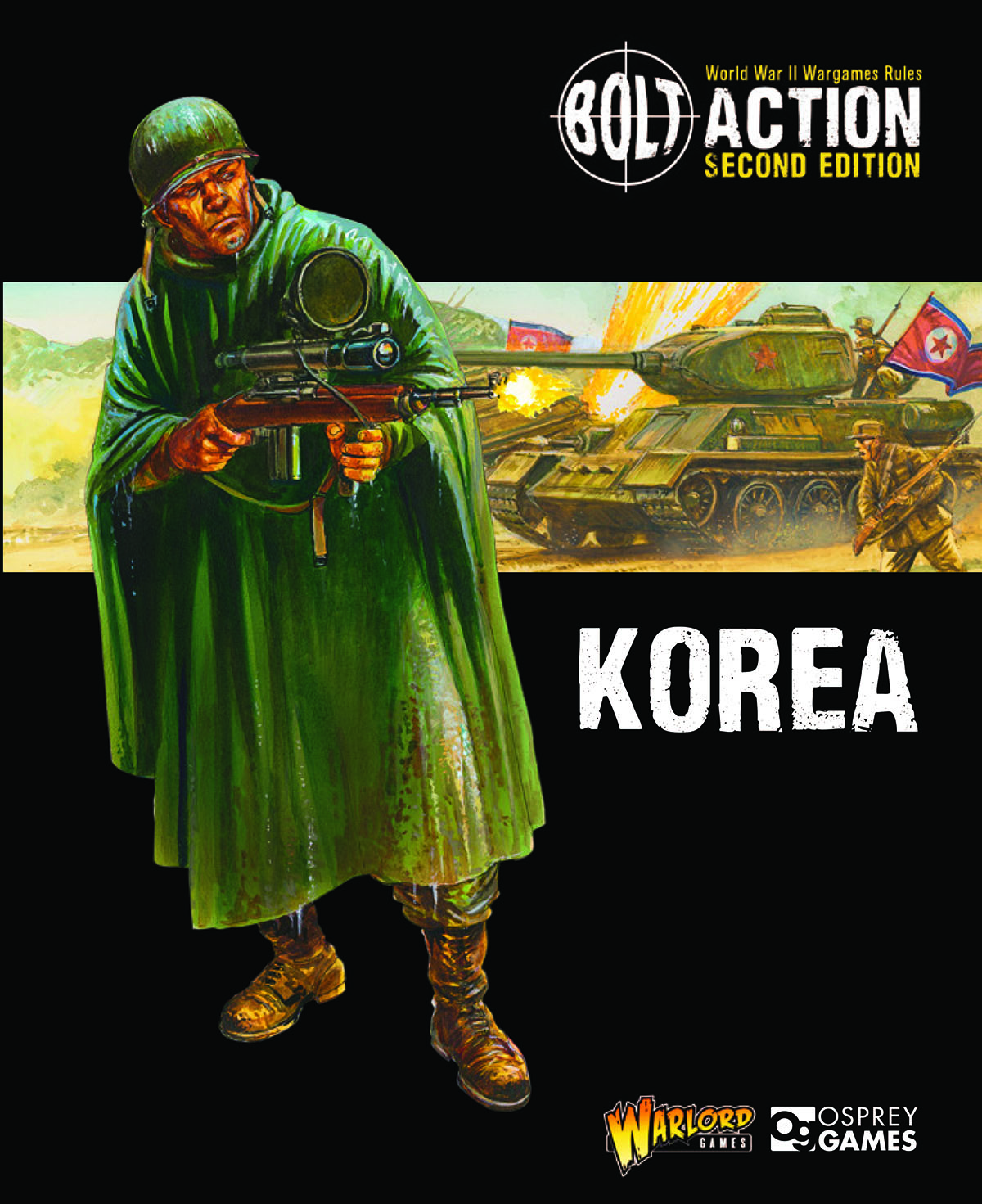 How did you go about approaching the Korean War as a game designer?

Co-writer Jon Russell and I had an overall intent and desire to cover both sides of the war – the Communists and United Nations – and all the major participants to create a well-balanced game experience. We absolutely did not wish to present Bolt Action Korea from the perspective of only one side and from the standpoint of a few limited combatants, say primarily the U.S. and South Korea. If we had done that, we would have lost the greater potential story arc of the overall game. We felt this this era hadn’t been fully explored and represented in 28mm by a major company, so the timing and opportunity was excellent. A large amount of research was required initially to see what was going to be needed to bring forward from Bolt Action 2 and then we had to look at what was going to be different for Bolt Action Korea. We needed to understand how the new era was going to be different and how we could provide a new experience for the gaming community. We started with the great rules of Bolt Action 2 and began crafting an extension for a totally different war. 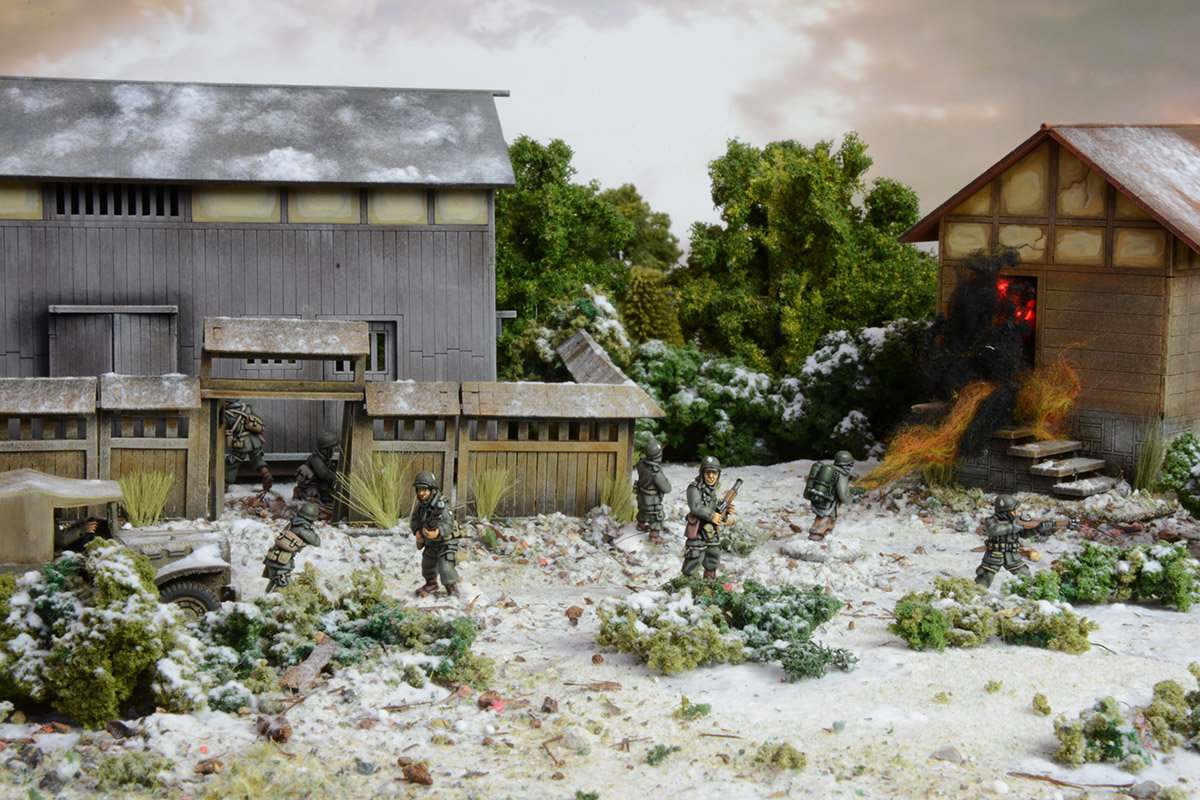 Image above: US soldiers raid a village to root out the enemy

What was the biggest challenge of designing the Korea campaign?

The absolute largest challenge with Bolt Action Korea was obtaining accurate data for the Chinese People’s Volunteer Army. Specifically, the correct table of organization of equipment, various unit manning, how different formations were functioning and their capabilities. Also, the evolution and changes of the South Korean and North Korean forces during the first year of the war. The first year of the war was incredibly fluid for all forces involved so there was a great amount of transition of units and equipment. The Chinese were the greatest challenge though because they truly were a uniquely structured volunteer force so the Divisions that went into North Korea from Manchuria were not the same Divisions that were originally a part of the Chinese Army. 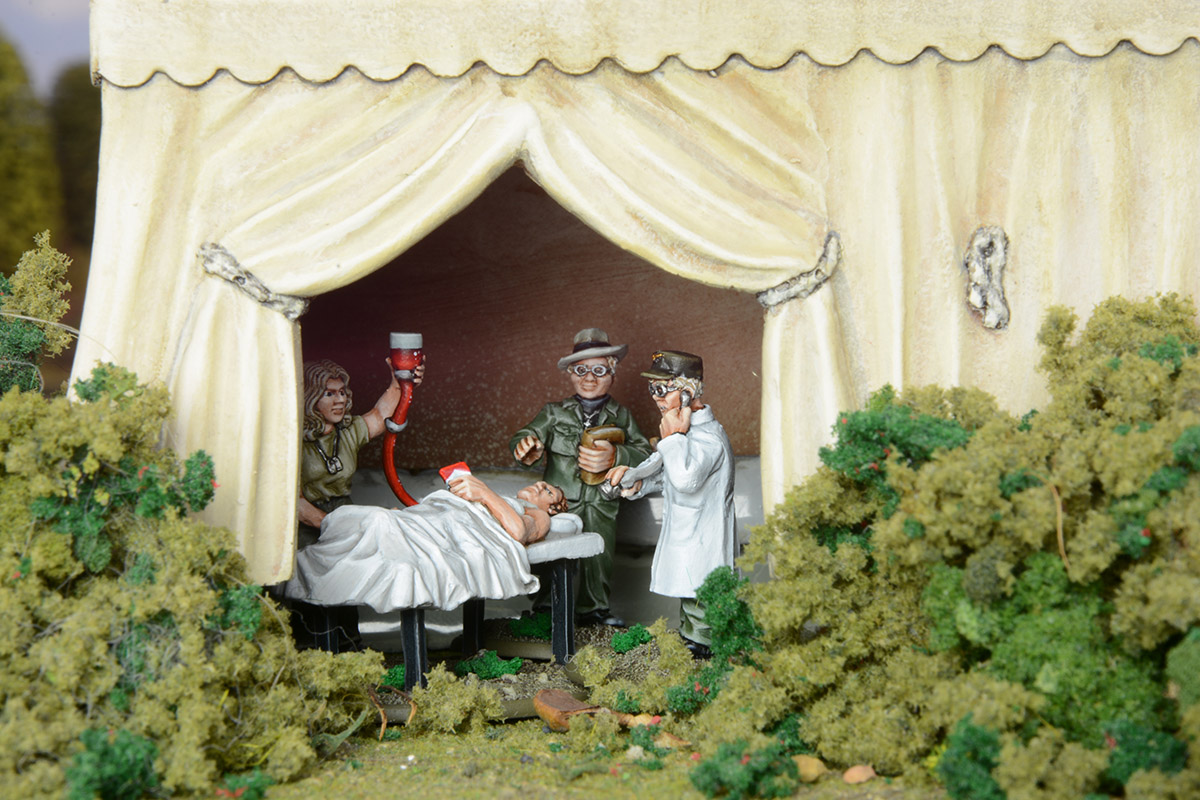 Image above: Suspiciously familiar faces from a MASH unit 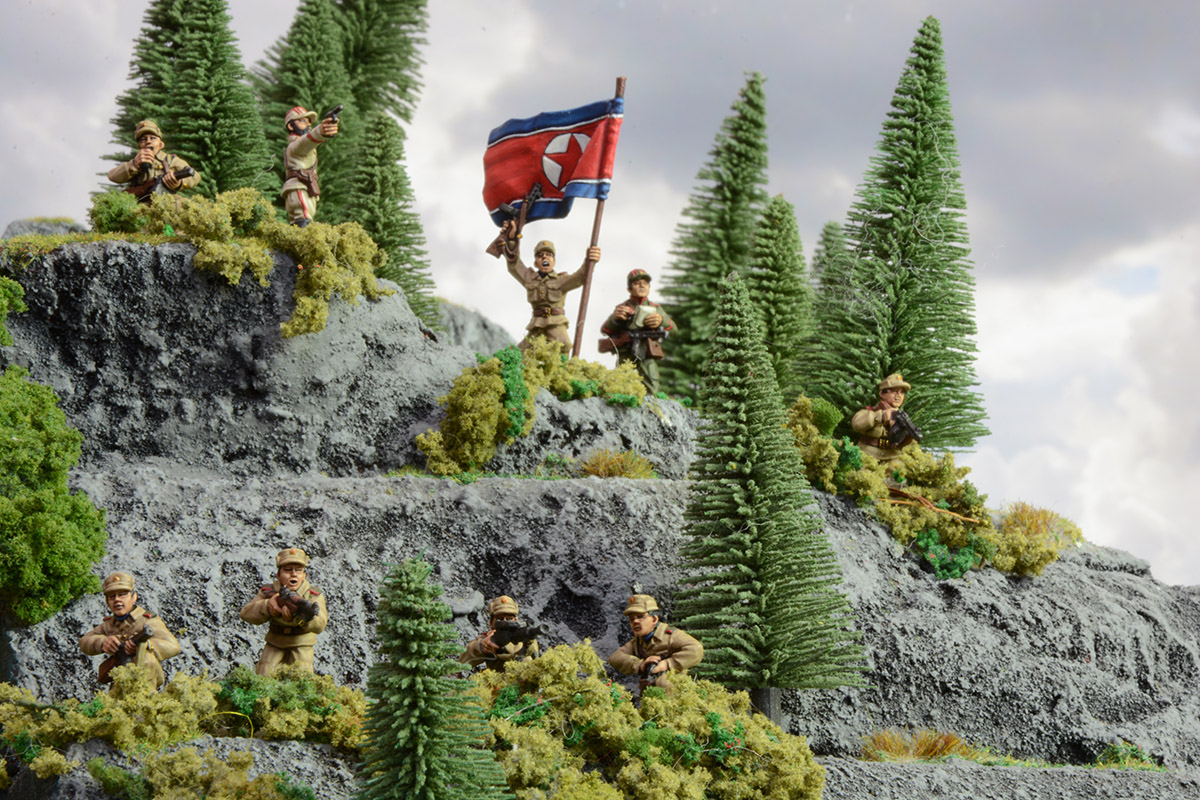 How do the armies of the conﬂict play mechanically speaking?

We believe the armies on the tabletop will very closely match those forces that fought during the conflict. For example, the Chinese are an infantry heavy force with more infantry squads then would typically be found in a Bolt Action 2 force. Should the North and South Koreans face off against each other on the tabletop then the special rules for each army will make for a brutal game. The United Nations forces have access to jet fighter support and increased medical support with the first use of helicopters. The U.S. and the U.K. have a vast amount of firepower, much more than Bolt Action. Lastly, consider the Allies. The Korean War was a conflict of Allies on both sides and in this game the players can field a force using Allied Forces in every game. 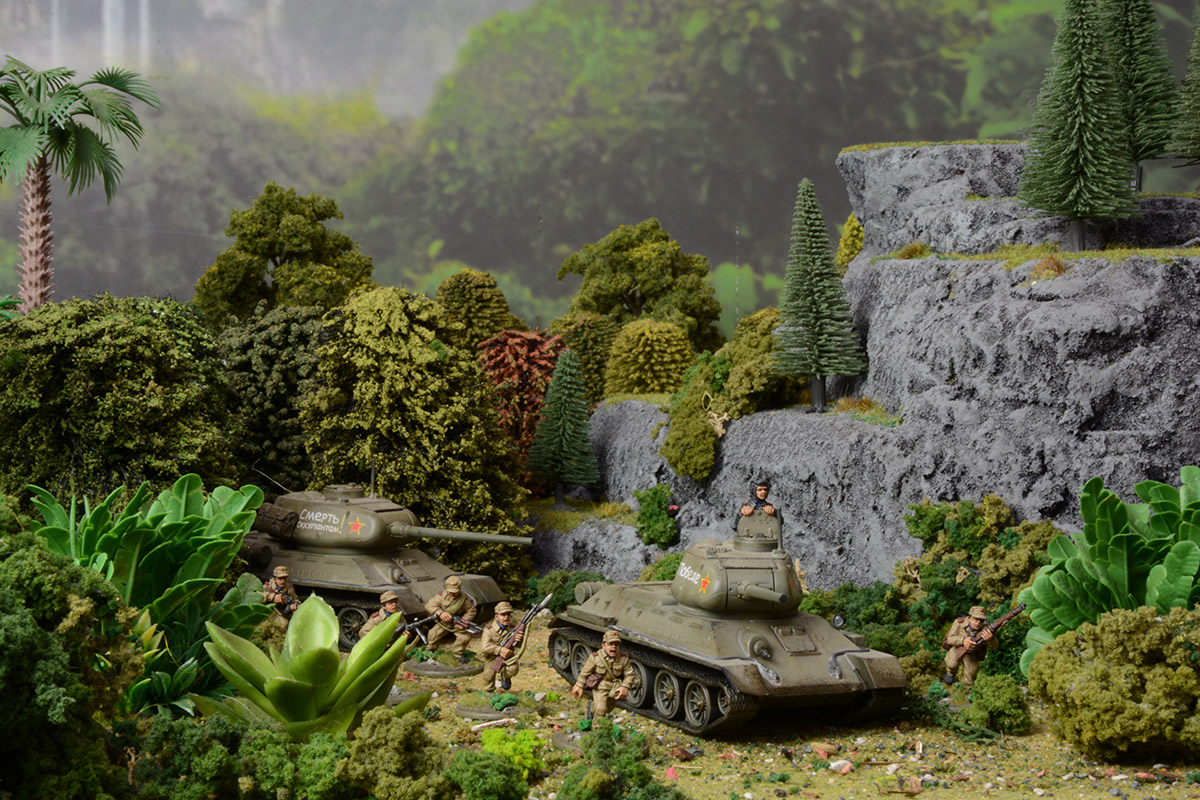 The Korean War was deﬁned in large part by Korea’s rugged terrain and extreme weather conditions. How do the book and scenarios reﬂect this?

This is the real challenge and excitement of Bolt Action Korea. We’ve included a very large collection of special rules in this supplement. Bolt Action Korea should be played with a large amount of rugged terrain on the table, night scenarios, bad weather and all manner of interesting situations. The war was fought in hills and mountains so the games should be played that way. We’ve also got night scenarios, as well as battles in wet or cold weather. We’ve included river crossings for added challenge. The scenarios included in the supplement have been chosen to give an introduction to both the history of the war and idea of the terrain the battles were fought in. The later stages of the war provided some of the most difficult terrain to fight in and some of the most well-known locations still in recorded memory with Heartbreak Ridge, the Punch Bowl and Porkchop Hill just to name a few. Street fighting occurred in both capitals, some smaller towns and numerous villages so that option is there too. 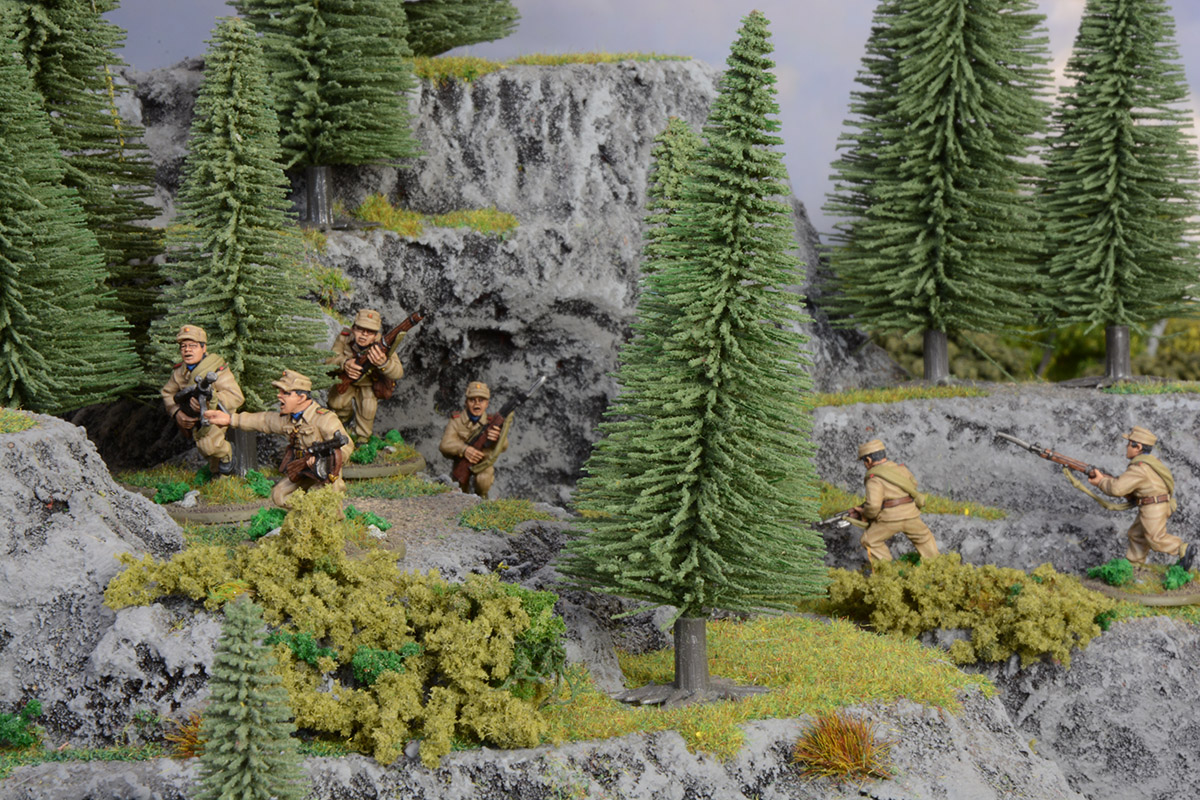 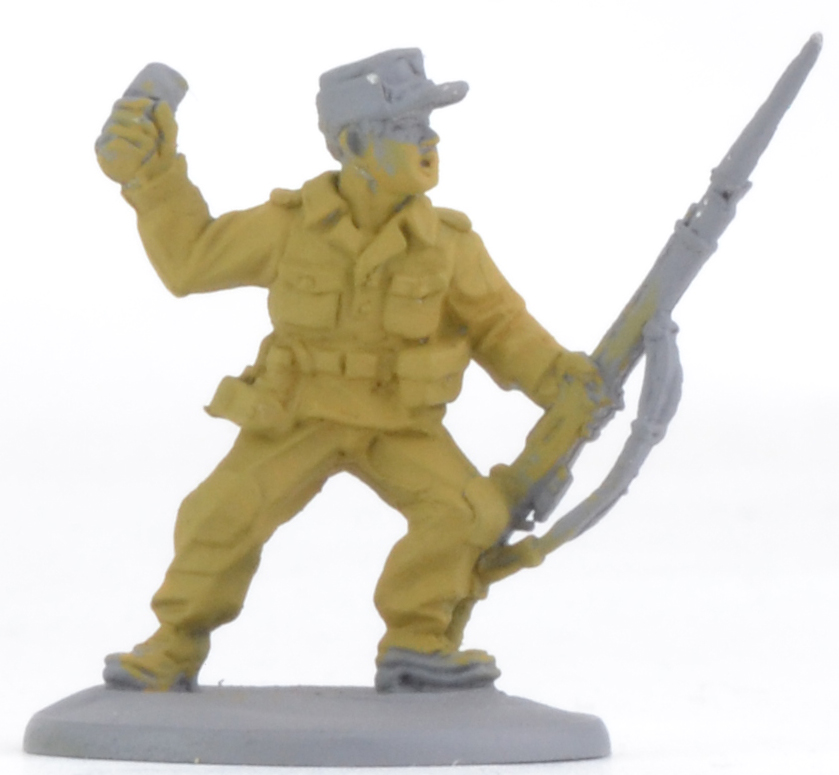 1 The model was assembled and primed grey. Epoxy putty was used to ﬁll in the gap between the miniature’s oval base and the plastic stand to which it was attached. The uniform, boots and cap were painted orange ochre. 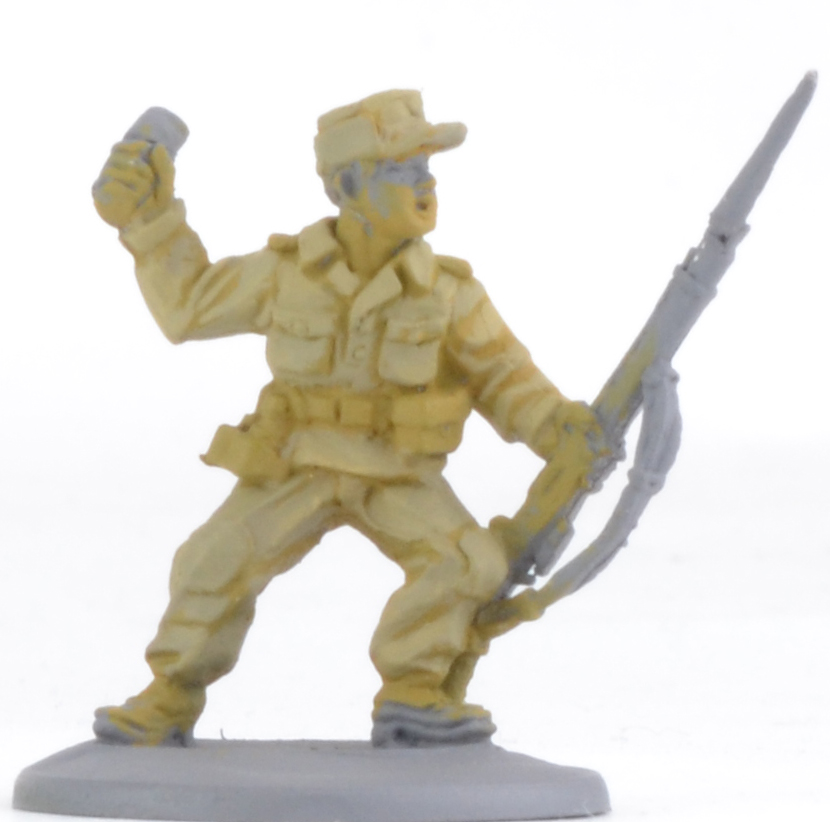 2 The previous areas were then given a highlight of a 50:50 mix of Orange Ochre and Stonewall Grey, so that the base showed through only in the recesses. 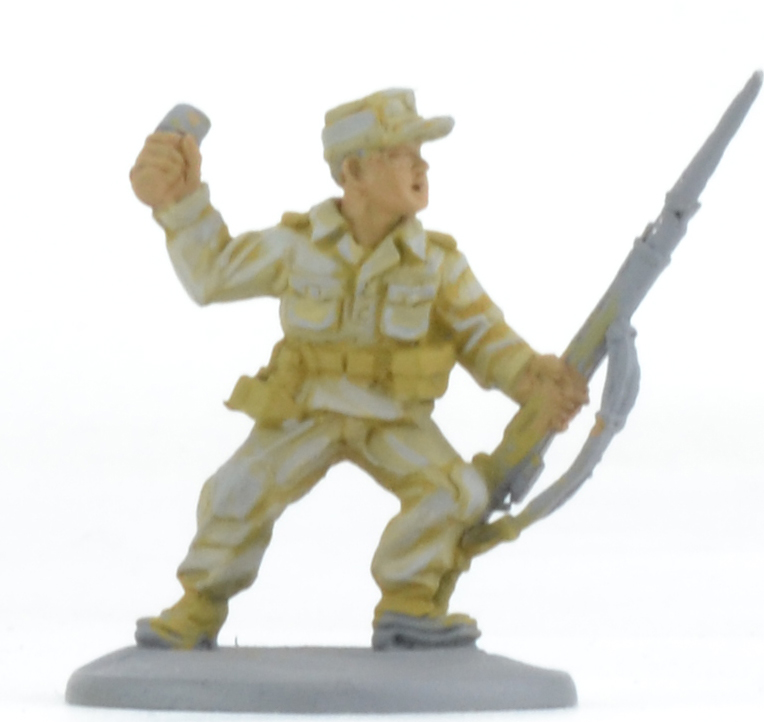 3 The uniform was given a ﬁnal highlight of pure Stonewall Grey and washed with Athonian Camoshade to give it a beige-green appearance. We only washed the miniature in the ﬁnal stage, but it would be easier to do it now before the rest of the details have been painted in. The skin was painted Cork Brown. 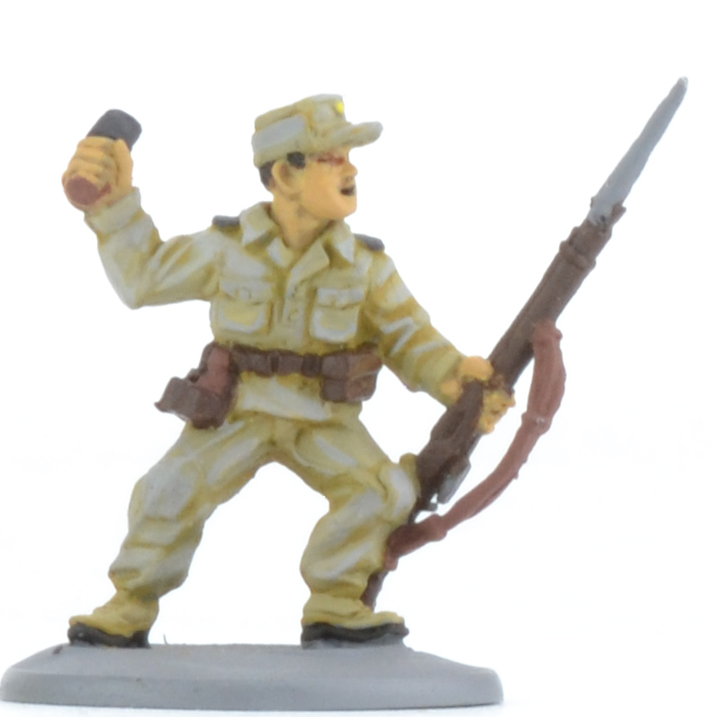 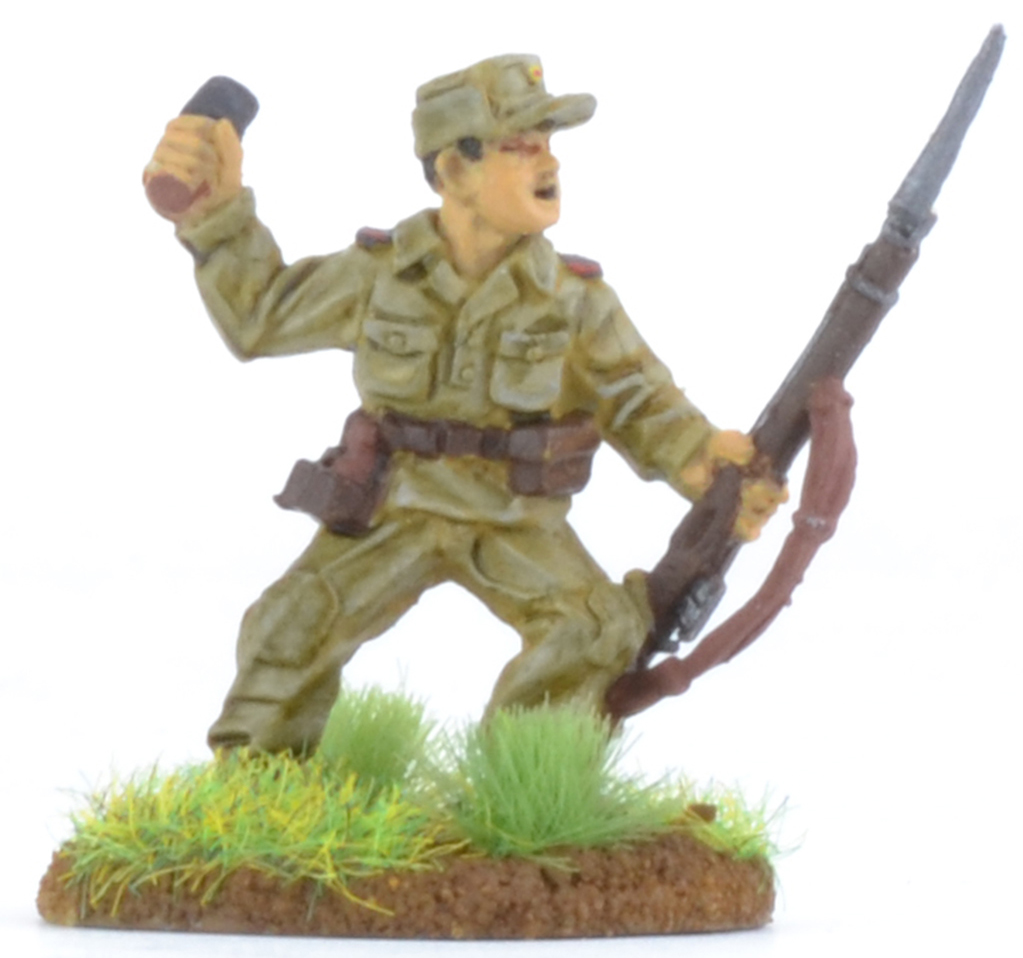 5 Gunmetal Grey was painted on all the metallic parts of the riﬂe. A stripe of Flat Red was painted on each side of the epaulettes. A tiny dot of Flat Red was applied to the centre of the cap badge to represent a red star. You can see the effect the wash of Athonian Camoshade has had on the uniform. The ﬁnal step is to base the miniature – here, the base is pet sand painted Flat Earth with ﬂocking and a few grass tufts.

A Note on Varnishing

With the exception of the Citadel washes, the entirety of the model was painted using Vallejo colours, particularly the Model Color series. As the Model Color range consists of realistic, muted tones, the paints tend to have a low amount of pigment in them. This – combined with the fact that the miniature

is metal – means that the ﬁgure will be quite prone to chipping.

If you don’t already, it’s highly recommended that you varnish your miniature to protect it. If you’re using an aerosol varnish, spray the miniature before you do the basing.

Highlighting and washing the uniform creates a really impressive effect, but does involve a number of stages. If you’re more of a gamer than a painter, you may just want to get your ﬁgures to the tabletop as quickly as you can (see p.60 for our guide to painting miniatures quickly). If so, an easier scheme you can use is as follows. Paint the entirety of the uniform and cap  Soviet Khaki Green and the pouches, boots and bags Drab Khaki. Depending on what skin tone you want, paint the ﬂesh either Cork Brown or a 50:50 Cork Brown – Dark Flesh mix. Paint the riﬂe a dark brown colour and the bayonet, magzine and muzzle a metallic colour. The other working parts of the riﬂe are so small that it’s hard to see them at tabletop level and can be kept brown. Varnish and base and you’re done. Soviet Khaki Green and Drab Khaki are both part of Warlord’s Rapid Deployment range of paints.

This review originally appeared in Issue 437 of Miniature Wargames  . Pick up the latest issue in print or digital here or subscribe to make sure you never miss another issue