An Interview with Sami Laakso about Lands of Galzyr This article originally appeared in issue 58 of Tabletop Gaming, and was written by Christopher John Eggett. Pick up the latest issue of the UK's fastest-growing gaming magazine in print or digital here.

Daimyria is world that’s been expanding for a while now. Starting out as the cute-but-cutthroat setting for Dale of Merchants and its standalone expansion-slash-sequels that include classic motivations like being the best at running a train station, it then became the spiritual home of not-a-wargame Dawn of Peacemakers. This interesting inversion of the usual wargame concept of smashing your opponent’s miniatures up sees players cooperatively attempting to broker a ceasefire between Macaws and Ocelots. Here, players are attempting to take the blood out of the fight on both sides at the same time, making for an interesting puzzle of peace.

And now, we have the outcome of putting so many games in the same universe – Lands of Galzyr is an adventure game with a persistent world and so many stories to tell. From a mid-sized box of fairly unassuming pieces comes a game of rich storytelling that happily goes toe to toe with games like Descent and Gloomhaven, but with a focus on story over combat. With an web driven choose-your-own-path adventure which takes you through the story, provides choices, and triggers your tests based on your stats and the keywords your and your companions have to hand.

The game uses time and seasons as a key factor determining how your adventure is going to go, and companions might only stay with you for a handful of days, making your time together importantly shaped by their presence. This urgency of characters makes your choices meaningful, and the world feel more alive. No character feels like an item, and everything you do has an impact on the world beyond its immediate effect.

We got in touch with Sami Laakso, the designer behind Lands of Galzyr and the man behind Snowdale Designs to talk about the upcoming game, and what drove him to create such an epic, persistent world.

What is Lands of Galzyr? 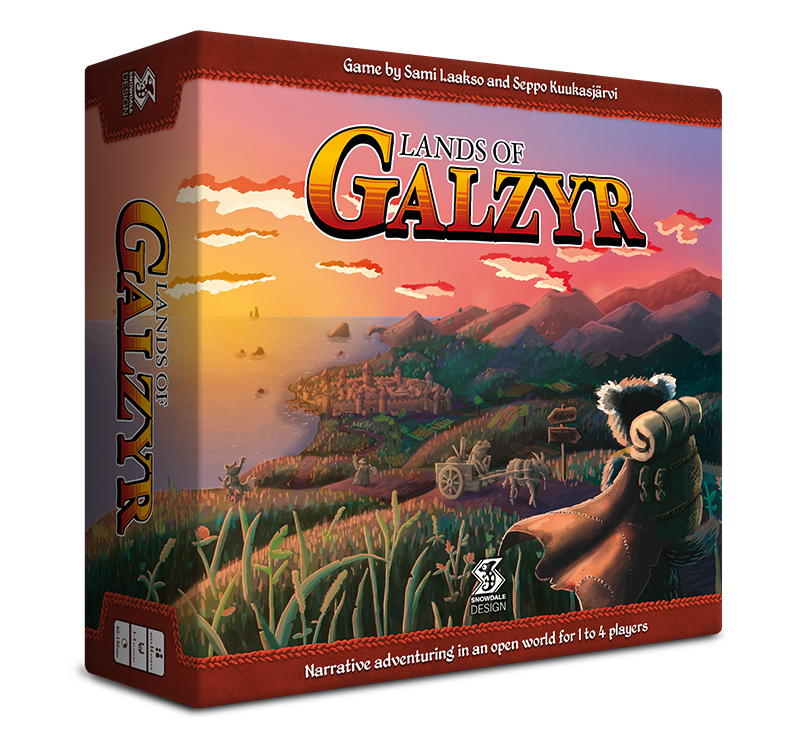 SL: An open world adventure with the freedom of going wherever you want and doing whatever you wish. Our goal was to create a world that feels truly alive and in which you could immerse yourself time and time again.

What’s the backstory, why are we here?

SL: Players will play as brave adventurers, seeking fame and glory. Each adventurer has their own backstory, their own reason on why they ended up in Galzyr. For example, Bumir the marbled polecat was born in the region and is now coming back in search of treasure while Mor the frilled lizard is attempting to seek out his childhood hero.

Where did you start with this game, what was the inspiration?

SL: Me and the co-designer, Seppo Kuukasjärvi, couldn’t find the perfect story-driven board game that we would fall in love with so we wanted to try creating one ourselves. When I came up with the idea of a board game which would remember your actions between sessions, I got really excited.

Tell us how you do stuff in the game, how do we overcome our problems?

SL: Each challenge in the game is resolved with a skill check, testing one of the six skills in the game. Are you trying to unlock a safe? Roll for thievery. Do you want to convince a marmot of your good intentions? Roll for communication. Or maybe you’re absolutely lost in the wilderness and need to find your way back to the nearest settlement? Roll for survival. The six skills form a circle where proficiency in one will also give benefits for the adjacent skills too.

Let’s talk about the characters in the game – who can we start as, and how do their stats work? We’ve got lovely coloured pegs to show our attributes and progress 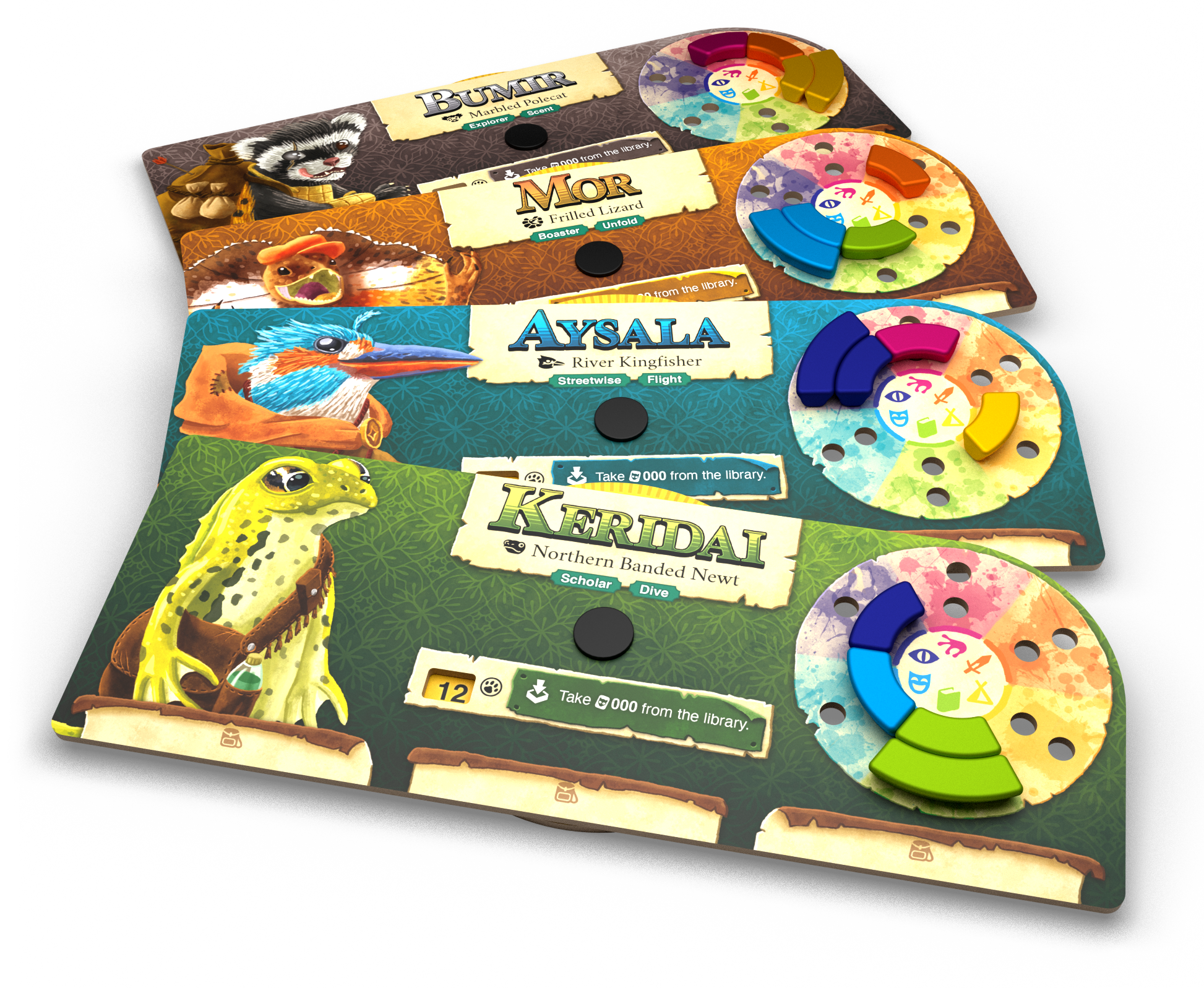 SL: In addition to the previously mentioned Bumir and Mor, we also have Aysala the river kingfisher and Keridai the northern banded newt. Each has their own advantages and disadvantages based on their starting skills. For example, Keridai has an easy time with knowledge related skill checks but can really struggle if she’s forced to take part in a street fight. Luckily, you can usually attempt to resolve the challenges in many different ways. You can also customise your adventurer to suit your playstyle while you play. If you want to make Keridai a thug who resolves problems with brute force? You can.

Can you take us through some of the mechanics you’re most proud of?

SL: The coolest mechanics in the game in my humble opinion are the card based save system and the skill check system utilising custom dice. The former keeps track of your actions during and between games. Did you upset a noble polecat by stealing their priceless gem? The game will remember that. The previously mentioned skill check system makes it possible to play the game your way. You can make your adventurer as good in any particular skill you want to at the cost of having less diversity at your disposal. Want to be a jack of all trades? That’s just as good of an approach as any.

The game uses an extensive online storybook to move the narrative forward, do you think this will be standard in the industry in the future for adventure games? Why did you decide to go down this route?

SL: It’s next to impossible to know what other publishers choose to do in the future. I believe the industry has room for both. While we knew there to be a vocal group of players who dislike anything digital in their board gaming table, we wouldn’t have chosen the path we did if we didn’t truly believe it to make Lands of Galzyr a better game. We wanted to have a physical storybook but the benefits outweighed the downsides so greatly that we didn’t really have an option in the end. Lower price for the consumer, no fear of spoilers, no need to search for the right paragraph to read, and being able to update the book later made it quite clear that we made the right decision for the game.

We love that you gain companions in the game, but only for a limited time – can you tell us about how this interacts with the characters, world and challenges? 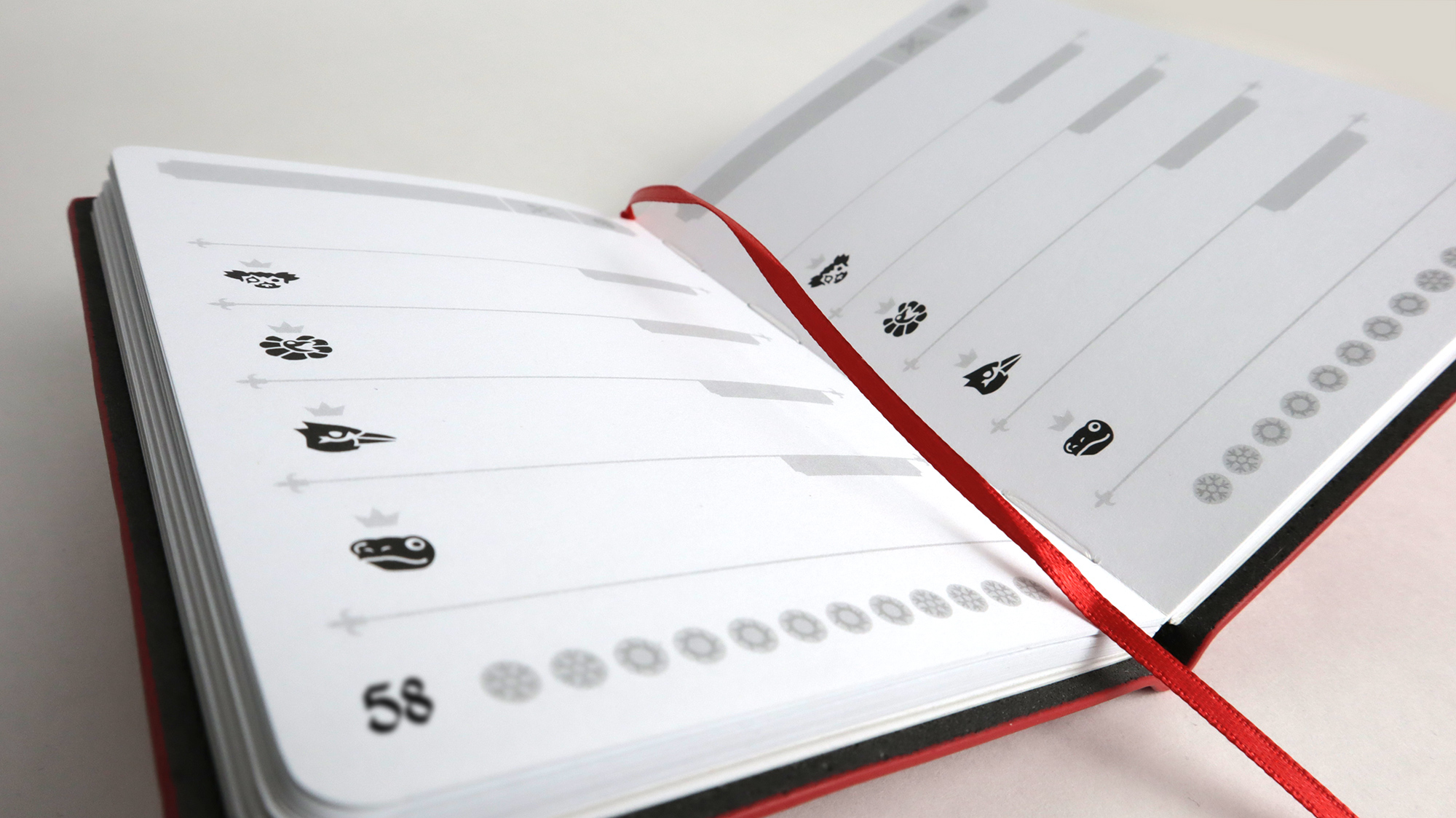 SL: When you meet the colourful cast of characters on your travels, some indeed would like to join you for a while. When they do, they can help you in many skill checks and provide you with helpful tags. The storybook often asks whether you have a specific tag with you – and if you do, something special can happen. In addition to companions having tags, each adventurer has some as well as any items and statuses you can gain on your journey.

There’s two main worldbuilding elements, time, and board persistence – can you tell us about how the seasons and time affect the world, and the way we keep the world persistent between playthroughs?

SL: Behind each scene number, there’s a story in the Book of Adventures. Those story scenes will have different situations happening depending both on the month and day you resolve them. That way a familiar location can have unexpected things happening in them based on when you visit them. Persistence between games is handled by moving cards between different sections in the card trays. The same card can mean different things depending on whether it’s in the library, event deck, player save slot, or vault for example.

What genre do you place this game in?

SL: Lands of Galzyr is a story-based adventure game set in an open world. If you would like to delve into a rich and colourful world where you’re granted freedom to choose your own destiny while your actions can have long-lasting consequences, this might be a good fit for your gaming collection. 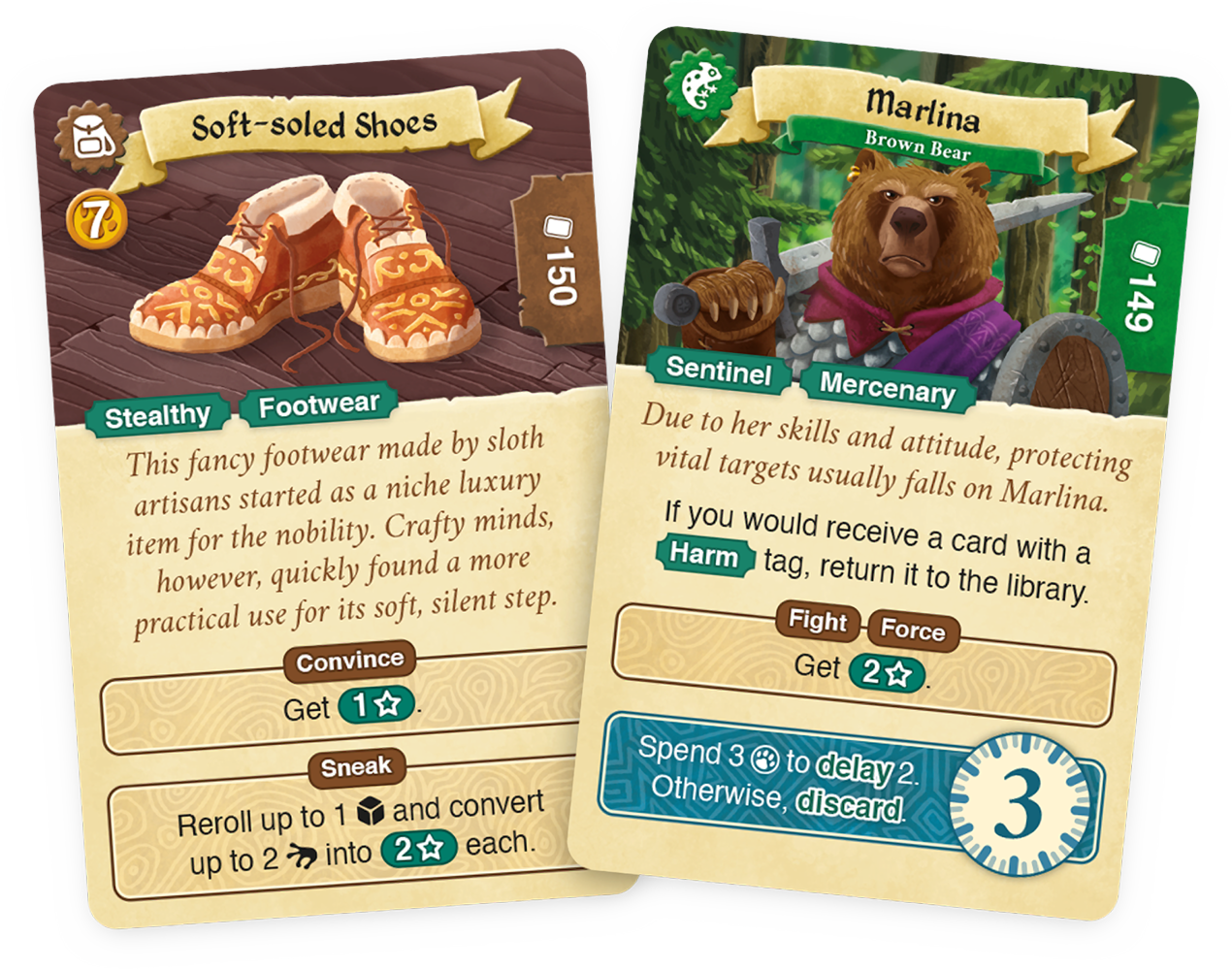 I played the game in mainly cooperative and solo modes, but there’s competitive adventuring. Tell us about this concept, and how that changes the player dynamic?

SL: While the rules stay the same outside of the game end condition, player dynamic can change a lot based on the mode you choose to play in. In competitive mode, you can be even more thirsty for prestige. It’s even possible to partner up with your competitors if you try to catch up with other players or get ahead. You can choose between the game modes before each individual play.

Any advice for players?

SL: Have fun turning every stone and peeking behind each corner – it’s more about the journey than it is about the destination. We’ve packed Lands of Galzyr chock full of secrets, surprises, and challenges that can make your visit to the world of animalfolks one to remember.

Can you tease the endgame for us – where does our adventure lead?

SL: You can play Lands of Galzyr as many times as you want, there’s no real end in the vastness of Galzyr. That being said, we have one huge story arc planned for the game that will keep you on your toes.

When does this land in stores and on doorstep, and what’s next for you?

SL: We hope to release Lands of Galzyr in the summer of 2022. Because of the success of the Gamefound campaign, we’re already planning on expanding the game in the near future. That’s not to say that I don’t have plans for Dale of Merchants as well as some entirely new games too.