If you’re hobbyist on a budget, or else a collector of miniatures no longer in circulation (often referred to as OOP – Out Of Print/ Out Of Production, in case you’ve ever wandered what that acronym stands for), you’ll probably look to buy items second hand from places like eBay. Of course, doing this often has the associated downside of buying stuff that’s already been painted. Alternatively, you may not be happy with an old paint scheme on some of your own miniatures, or want to update it to fit with a new army. Whatever the reason, you’ll have to find a solution from parting the paint from your little toy soldiers.

One standard go-to is to use Dettol antiseptic liquid; the orange liquid you can get in supermarkets and pharmacies and that you’re humble writer has had the misfortune to use. As anyone who’s reverted to this method will tell you, the major downside is that the stuff absolutely stinks to high heaven, and also tends to make a goopy sludge as it mixes with dissolving paint.

There is, however, a much easier method, namely, isopropyl alcohol. This stuff can be brought online or at any good hardware store, and is an absolute godsend. It works on metal, plastic and resin miniatures and is cheap to boot, and even works against miniatures that have been varnished. The 99.9% is the best stuff to go for, simply because it’s the most powerful.

Below is a quick tutorial on stripping miniatures.  I’ve used some metal miniatures from the old VOID miniatures wargame. 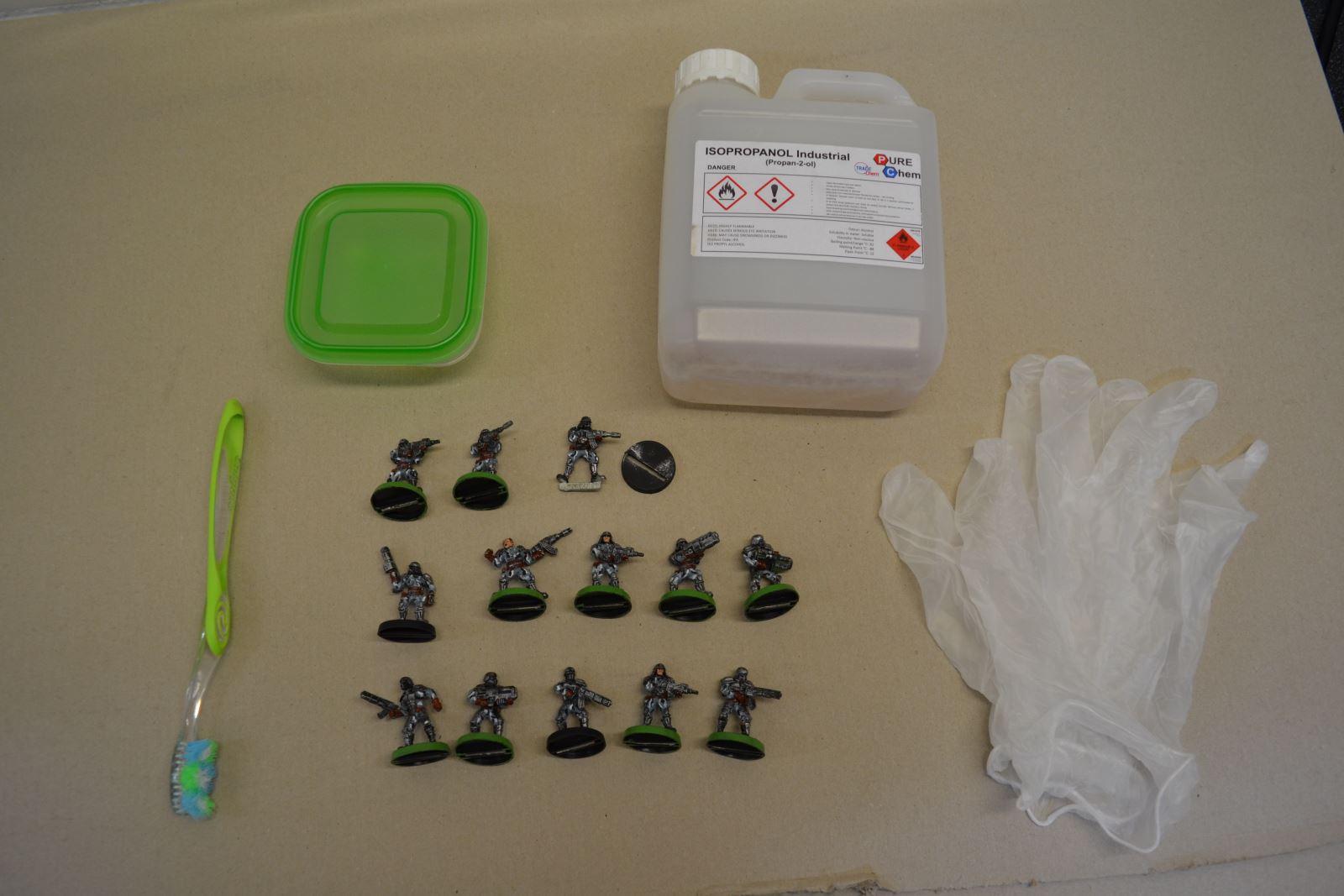 First up, tools of the trade. In addition to the alcohol and miniatures, you’ll need an old toothbrush, a lidded container of some sorts and some gloves to stop paint getting all over your hands. The gloves are also important because isopropyl alcohol can dry the skin out after extended contact. You’ll also want to put down some newspaper on the surface you’re working on, and work in a well-ventilated area. Though nowhere near as bad as Dettol, the stuff produces a pretty powerful smell and you’d get lightheaded if you huffed it for too long. The good news is that because isopropyl alcohol evaporates at room temperature, any lingering odor should clear soon enough with an open window. 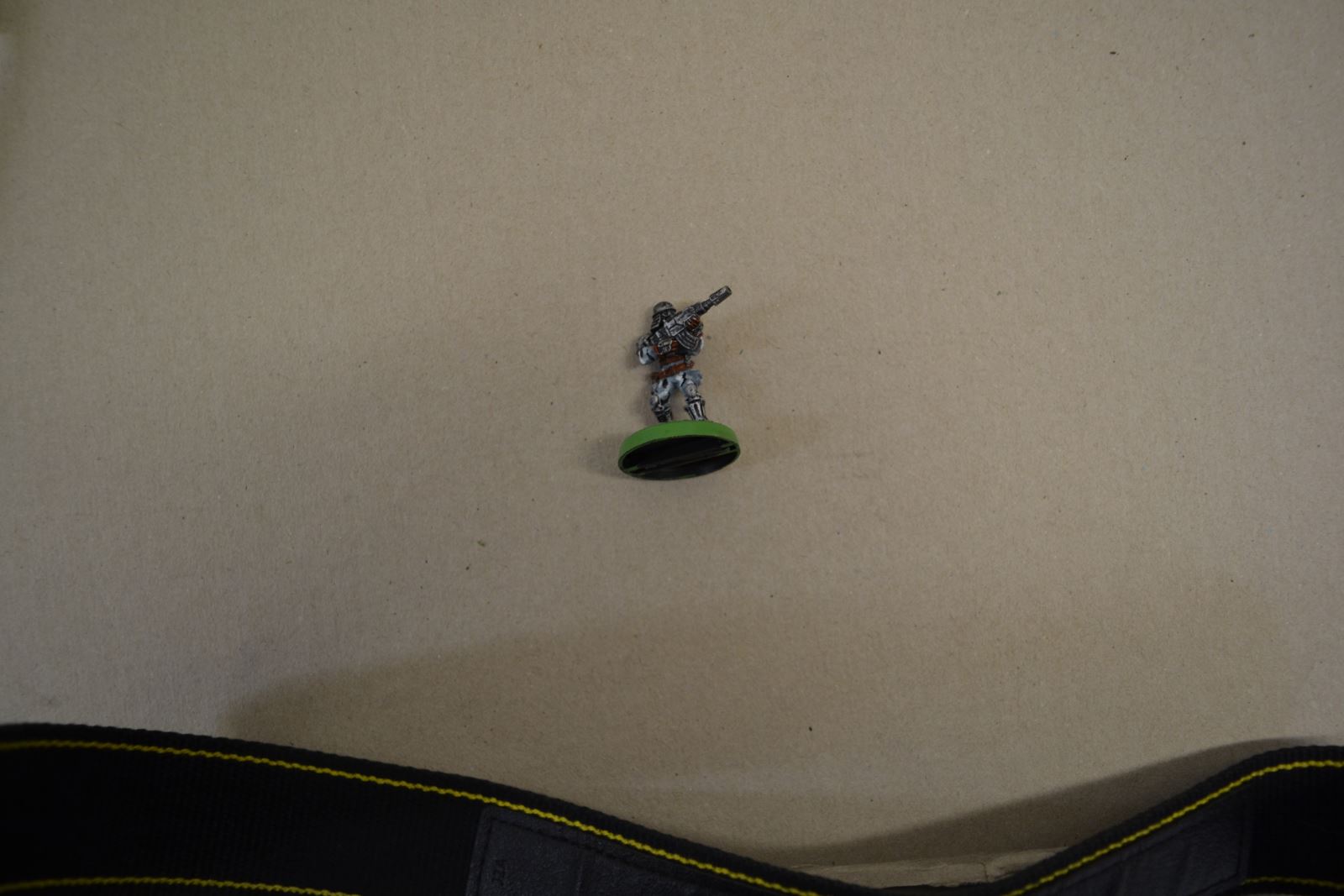 Here’s the figure to be stripped. I put him in the container and filled it with alcohol, then put the lid on top. I then let him soak for about half an hour. Plastic miniatures often take longer than resin or metal, because of the way any primer will bond to the plastic. 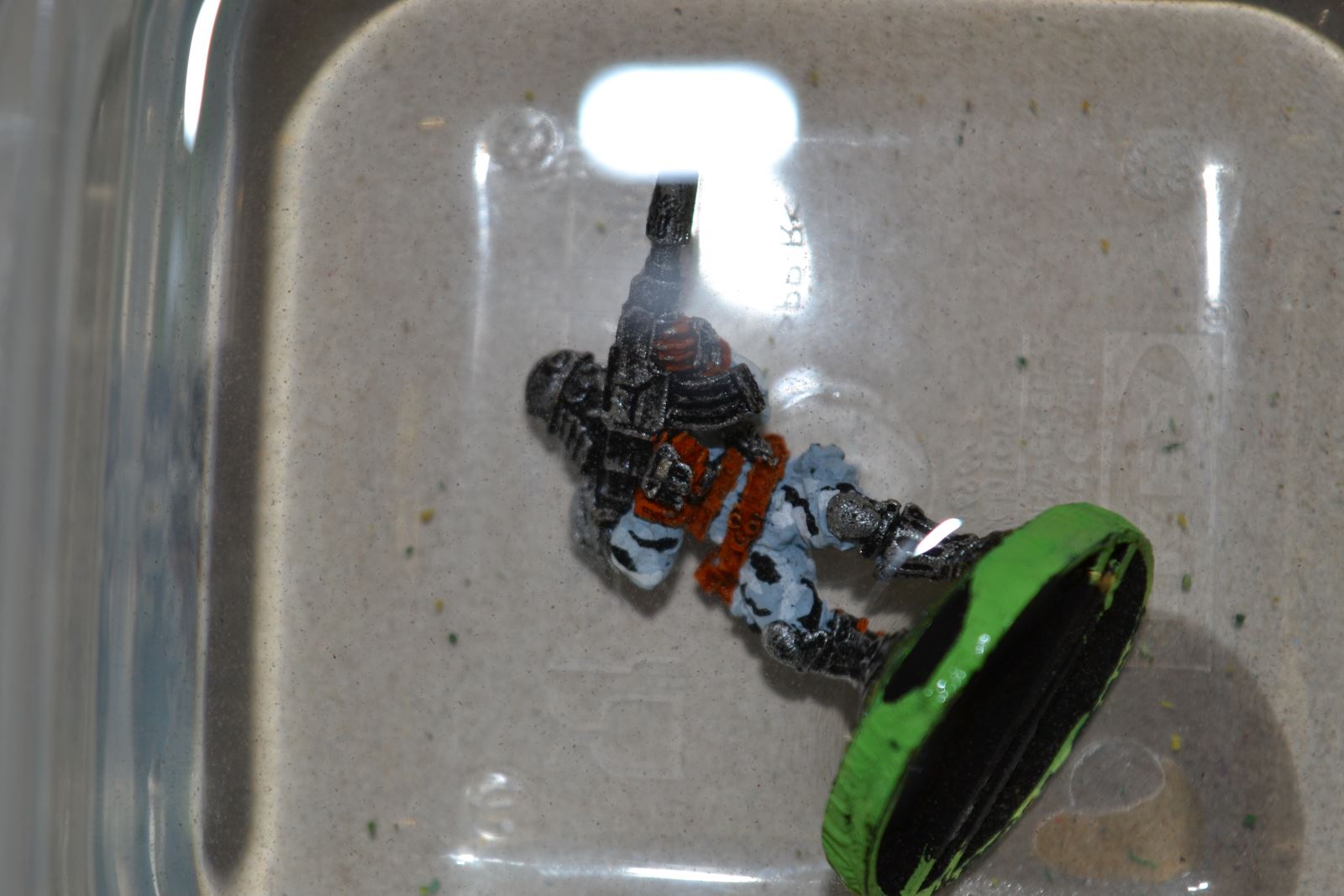 Taking him out, you can see that some of the paint has become all wrinkly (the legs and the base especially). This shows that the paint’s been loosened enough to scrub off. 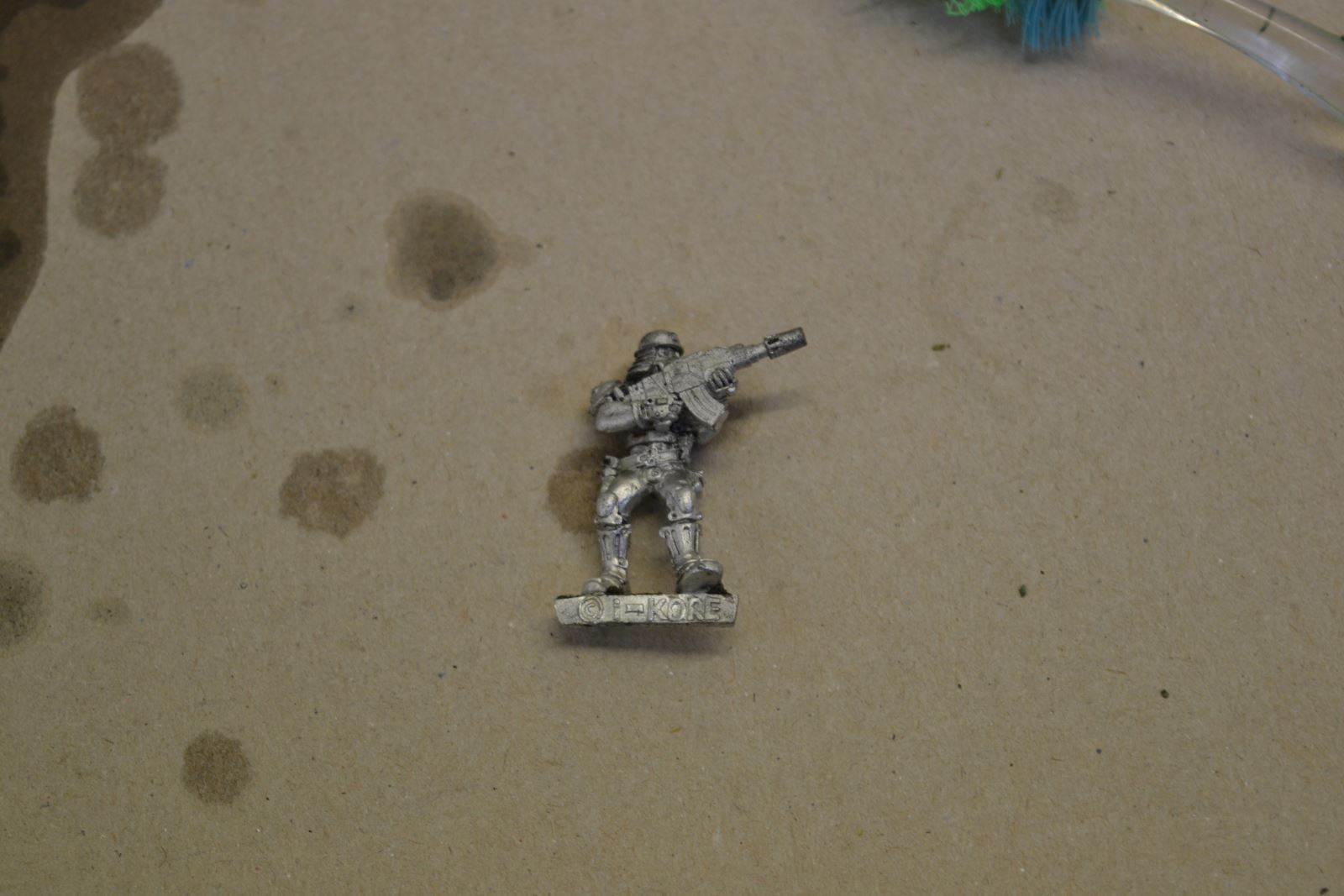 After 30 seconds of scrubbing, you can see that the end result is a miniature that’s virtually paint free. This miniature was varnished, but that hasn’t presented a problem here. 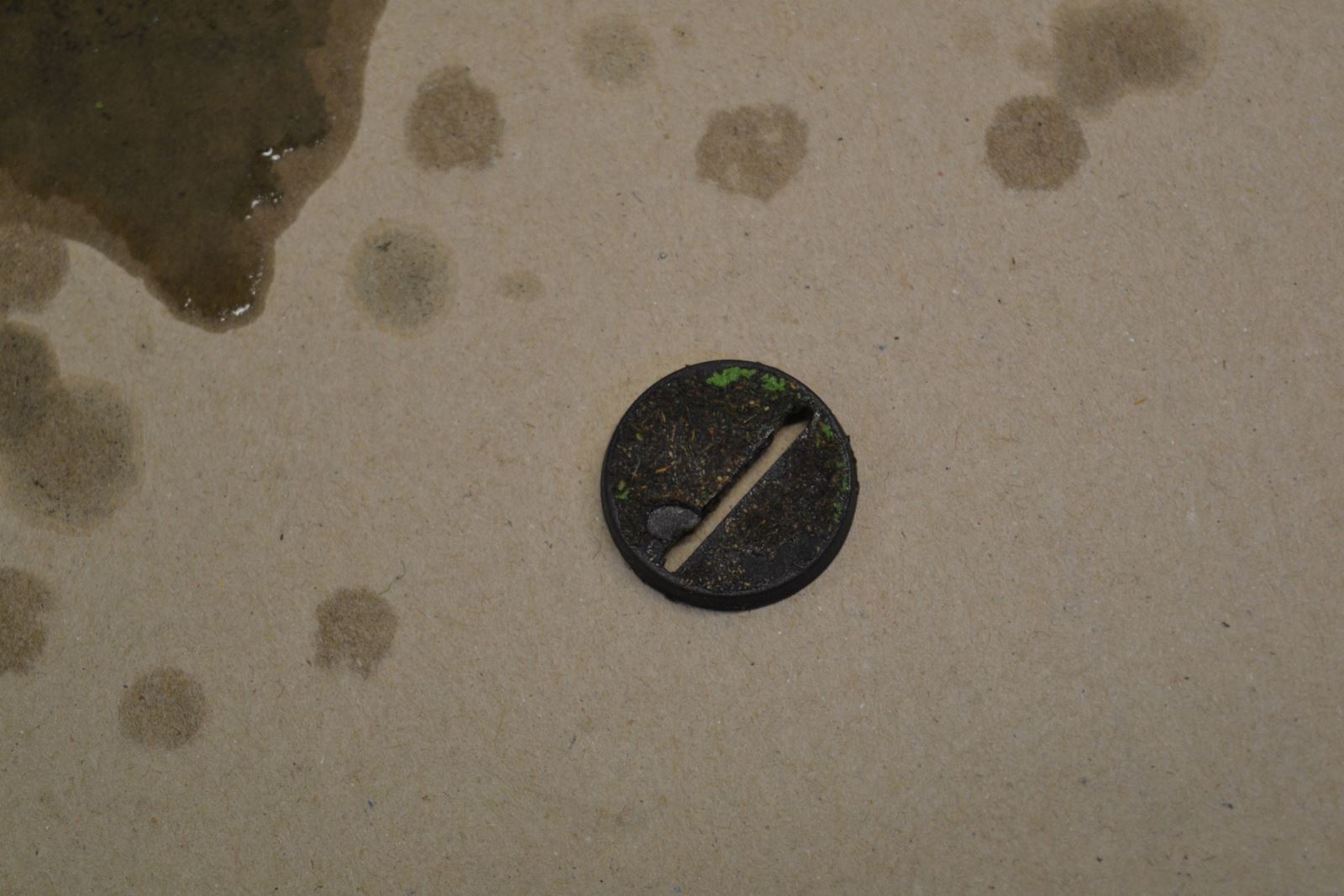 I’m pretty sure that alcohol tends to make superglue a bit more brittle. The base has come off here. Anything stuck on with PVA will usually just peal straight off, though here you can still see some of the flocking still attached. A bit of scraping will remove it in no time. 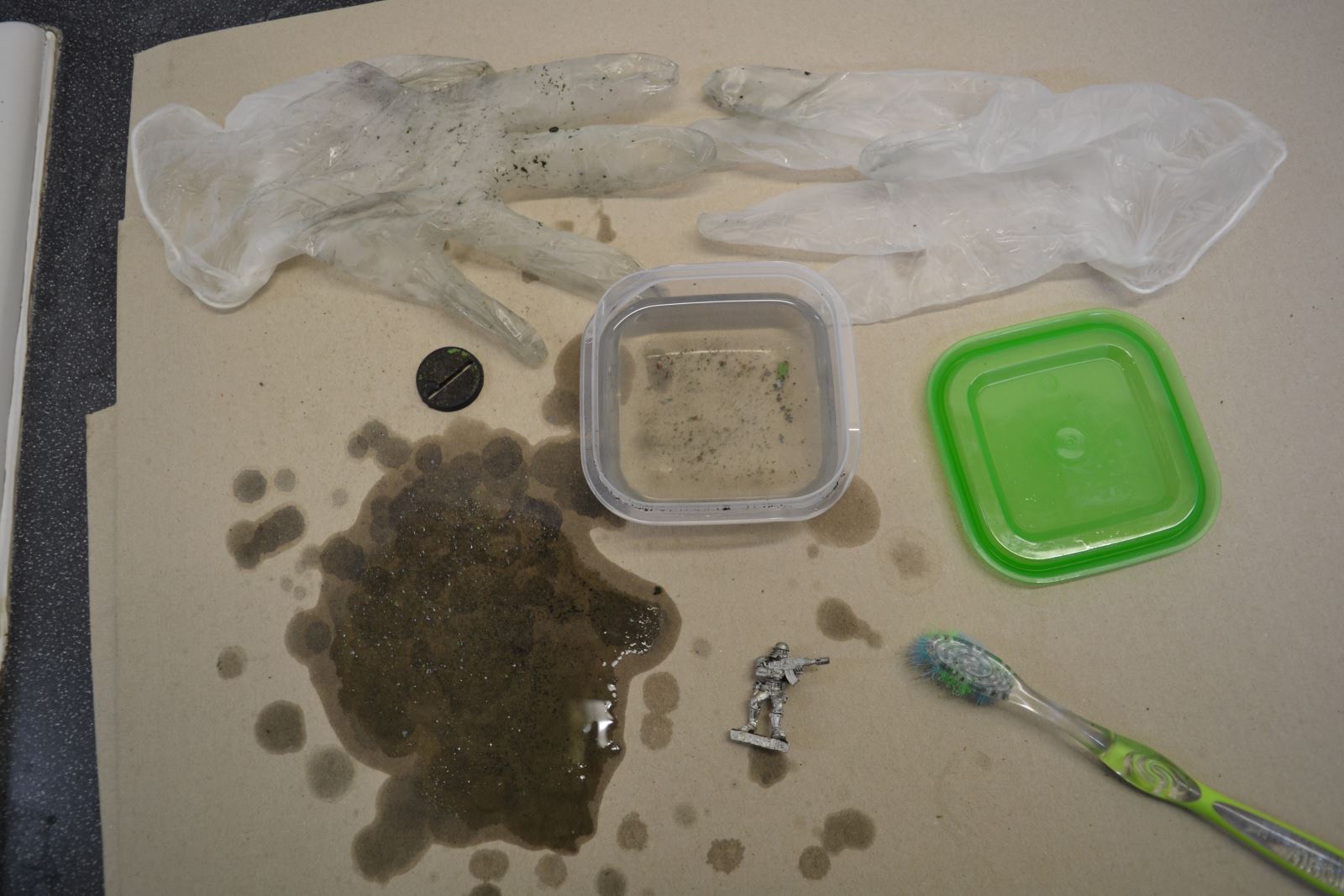 Here’s the reason you want to make sure you’ve covered your work surface. Scrubbing is a messy business, and little flecks of paint and alcohol will inevitably get everywhere. The paint is a bugger to get rid of, so make sure to where clothes you don’t mind getting dirty.