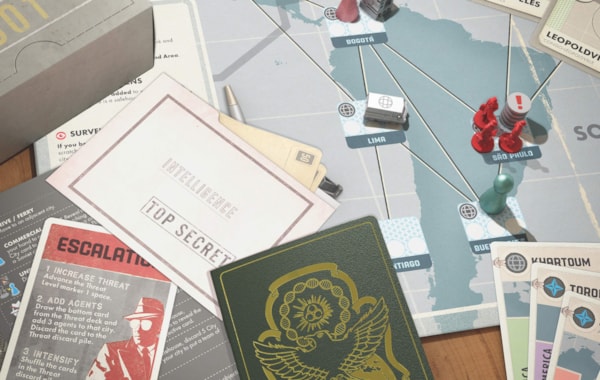 As Pandemic Legacy: Season 0 is the last instalment of the series, we wanted to check in with its creators Matt Leacock and Rob Daviau to discuss the last entry in the Pandemic Legacy series

“We were working remotely before it was cool,” says a smiling Rob Daviau when we broach the subject of rearranging our lives because of a real life pandemic. Matt Leacock also is quite used to these questions now it seems “as far as the game is considered, it’s certainly been a lot more topical. There’s been a lot more media involved. But it’s been nice knowing that the game has got positive messaging, so you can go back to it and talk about how it teaches people how they can come together and cooperate in order to overcome something larger than themselves.”

Thankfully however, Pandemic Legacy: Season 0 isn’t about an actual pandemic like its predecessors and many offshoots of the series. Instead the game takes place in the midst of the Cold War. Rumour has it that the Soviet Union is developing a bioweapon, and your team from the CIA is heading out in the world uncover and foil this plan. Or at least, that’s how it all starts.

“Under the covers the mechanisms are pandemic but instead of a disease spreading on the board you’re dealing with threat of the Soviet agents as CIA operatives,” says Leacock, “anyone who has played pandemic will be familiar with the beats of the game.” 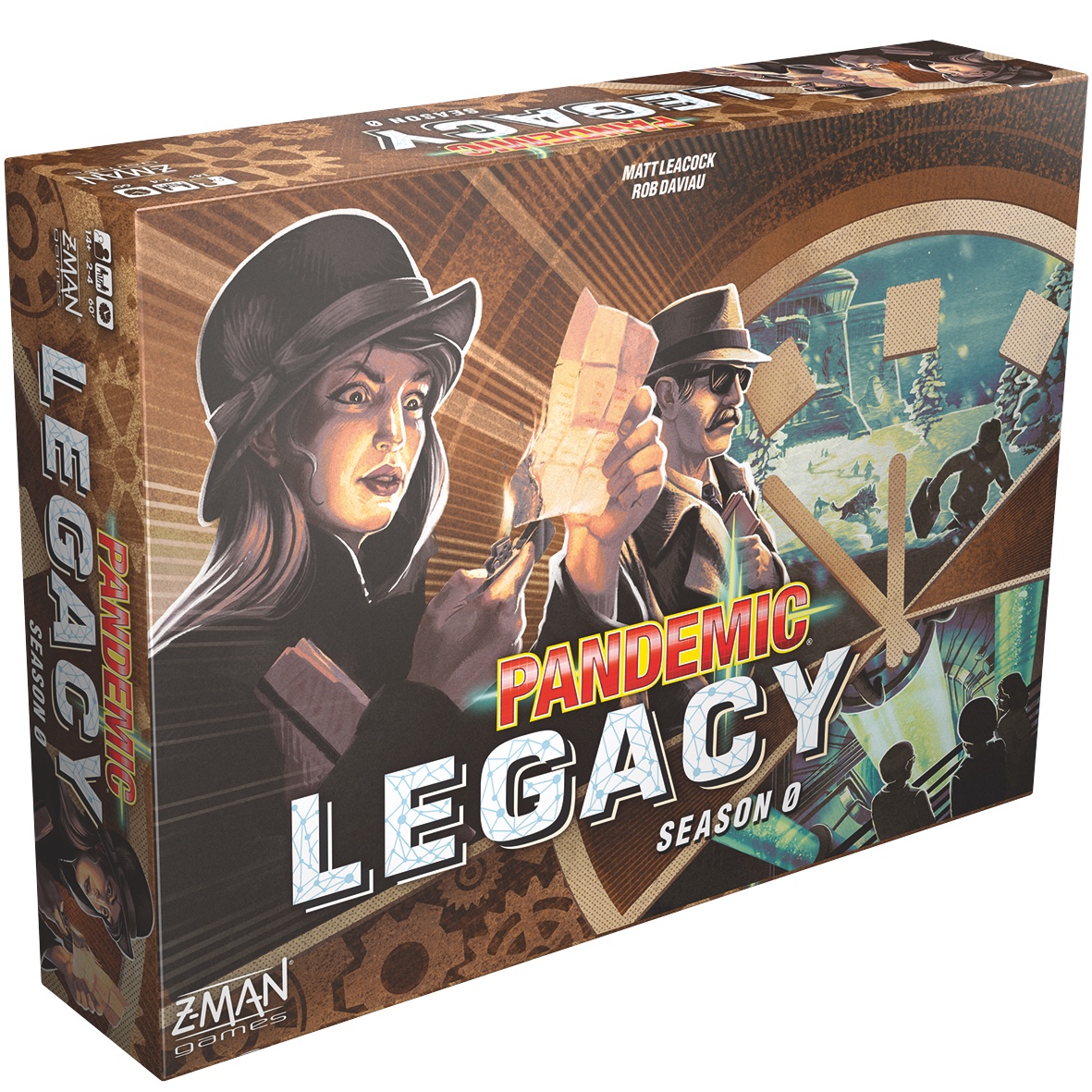 “It’s more divergent from the core Pandemic mechanisms and Season One, which really just starts with Pandemic with a few tiny changes,” says Daviau, “I don’t think it’s as divergent as Season Two. We focused more on telling a story in this one, we sort of painted a broader brush story in Season One and then did something different than Two. And I think this one, because there’s a whole separate debrief book that you get little snippets of what’s going on out in the field and depending on whether you succeed or fail different objectives, you get different narratives. So everyone’s getting slightly different information in this spy thriller, which allows us to have more story variants in what people were experiencing than we did before.”

It’s a very different game from previous legacy outings, and the spy thriller motif was one put together in a 15 minutes conversation where the ideas of the passports, aliases, the iron curtain and so on sprang to life, “and to be fair, a lot of those things made it into the final game,” says Daviau.

As for other sources of inspiration, the pair mixed historical and schlocky research.

“We watched some spy movies over that summer,” says Daviau, “I watched Three Days of the Condor and an old James Bond, and Matt was reading up on the history of the CIA. Then, when we had our first meeting, which was just about four years ago, we sat down and we just poured out all the tropes.”

“You know, an exploding attaché case, getting conflicting messages, and being chased by a van in Prague. We just tried to think of all these moments we would try to get in to the game”

The tone was an important consideration. It’s always difficult to know what level of deference is required for anything about the past.

“One of the big challenges is trying to figure out where to peg the game. You know, is it more like James Bond and Moonraker? or is it more serious and deeper like Tinker, Tailor, Soldier, Spy? Which is more subtle and so on,” says Leacock, “and so I think we consumed a lot of media trying to figure out exactly what we want to peg it. We did find that we couldn’t make the game too deep because it was difficult for the players to follow the story from game to game.”

“Sometimes you play a game and you put it back on the shelf and when you get it out next week people have to unpack the story again each time. I think the game became a little bit lighter for those reasons,” continues Leacock.

Daviau pitches it around the world of light hearted schlock, “we ended up where we usually do, depending on the genre, which is a summer blockbuster with a lot of plot holes. We’re not talking real plot holes, but implausible things that you gloss over for narrative, and we painted something that we don’t pretend is a documentary. It’s more inspired by the movies of the time than the history of the time.”

“But I want to say, we play it somewhat straight, right? We want you to be emotionally invested in these characters, but it’s not deep. It’s not the 800 page spy thriller with a lot of secondary characters and spinning off plotlines. It just had to be simplified down.” 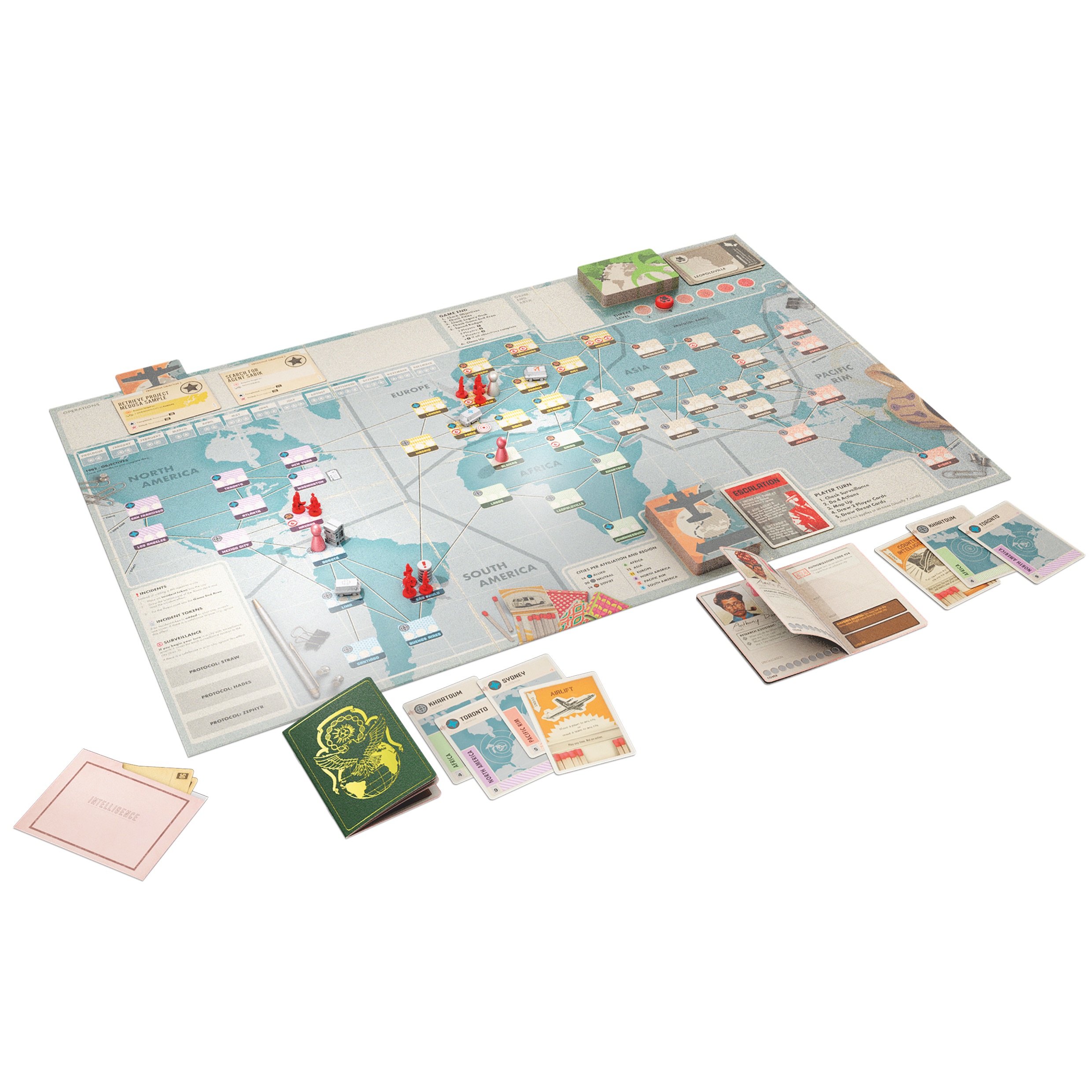 When we asked to clarify whether the CIA were ‘the good guys’ in this game, Leacock immediately offers a response “we have to point out very clearly that they’re not. They’re certainly painted with some greys.”

“If you dig into their history, it’s hard to put them as anything close to shiny clean good guys,” add Daviau, “players start out as new recruits into the CIA. So you’re very optimistic that you’re out fighting communism. And then very quickly – in the prologue even – you realise that ‘Oh wait, no, the world is not black and white. It’s grey.’ You step into those shoes and begin by being naive, and then get exposed to the world.”

Much of the game is spent assembling CIA teams, represented by amusing little white vans on the board, who can help you mop up soviet agents or complete missions by being the right city and the right time.

“That was a fun twist on the game and made it feel fresh,” says Leacock, “it’s something we needed to change up as, it turns out, agents don’t multiply. You know, they don’t outbreak into adjacent cities.”

Instead when you have a critical mass of agents in an area, they cause an incident from the incident deck.

Character development also became an important part of this outing of the Legacy series.

“We saw how people really identified with the characters that are playing over time,” says Leacock, “and in Season Zero, we had this opportunity to give people passports, so that you could develop different facets of your identity over time. Each player typically takes on one character over the duration of the season, but those characters actually become more dynamic, and described in much richer ways.”

While previous games gave you characters with relationships which would fluctuate dramatically throughout the game, this time those different characters are just facets of your spy identity.

THE PAST UNDER SURVEILLANCE

“I think that Season One in particular will be held up as a breakthrough for the legacy genre,” says Leacock, “it seemed to really validate it, given its success.”

Daviau is more restrained, “it’s always hard to talk about what happens in the future. Even games that were particularly beloved and transformational, people get tired of familiarity,” he says, commenting on how jaded people are with Catan at this point the hobby, “I think the differences with Pandemic Legacy, is that you probably played it, and then aren’t playing it again. So, you played it once you had memories of it. I don’t know. I’d like to think it was thought of well, and if it’s not, you know, just let it be like 40 years after I’m gone.”

We also approached the topic of the legacy mechanic’s place in the hobby right now, “it was a gaming genre of the teens,” says Daviau, “now we’re in the twenties, more will come out. However, I think people discovered that legacy games take a while to make, they’re expensive to make, easy to get wrong. You have to be kind of lucky to get them right. I don’t think you’ll see them in the next 10 years as much as the past five.”

“We’re in the trough of disillusionment,” adds Leacock. 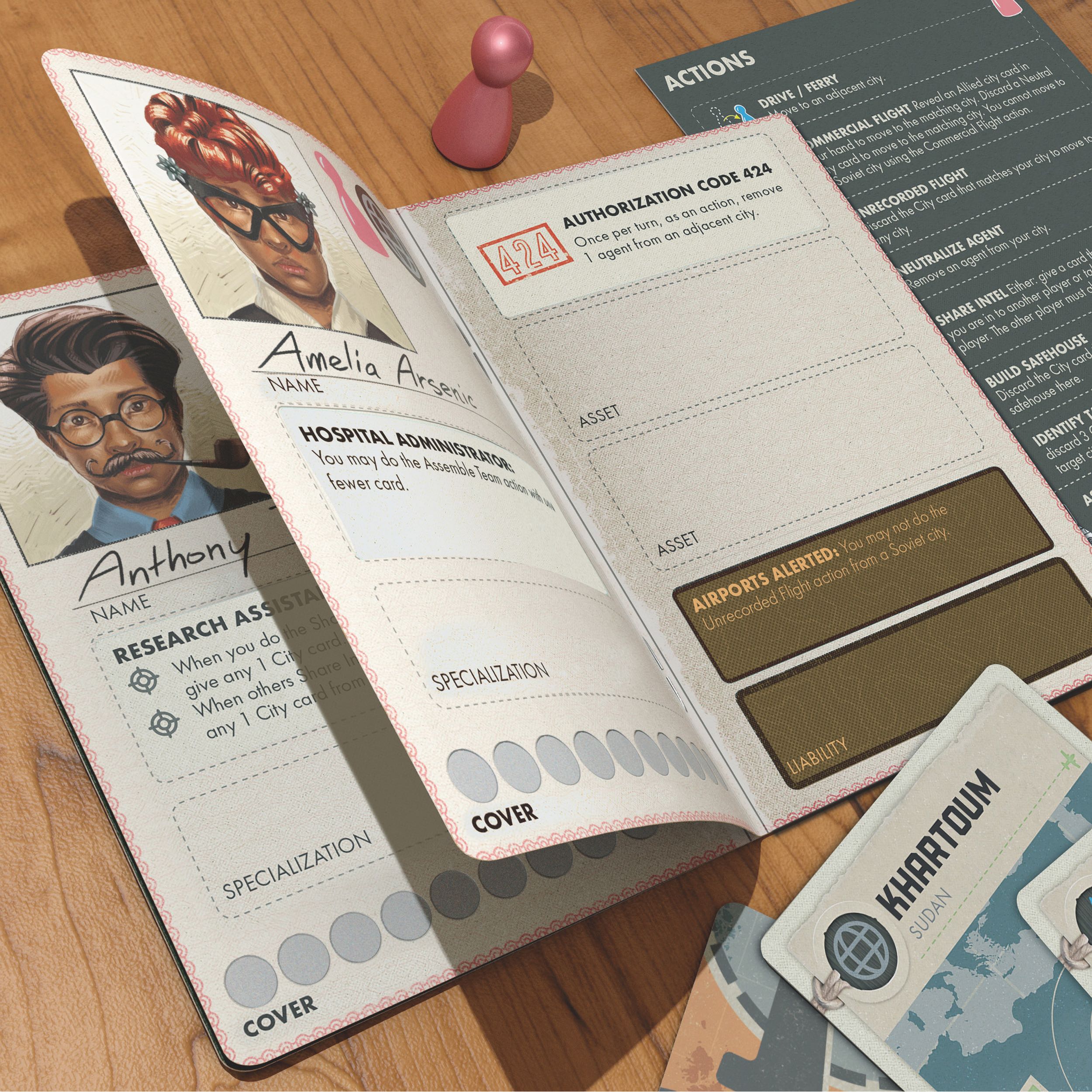 Pandemic Legacy: Season 0 is considered to be on a slow burn by the pair because of the real pandemic going on in the world. Whereas the first Pandemic Legacy game leaped up the BGG charts on release, Season 0 is making a slow rise.

Looking at the whole world the games exist in, we ask both designers to pick their top five. Predictably, they can’t be drawn on the ranking of the Legacy series, including all three in both their lists.

“I like the original game, because I remember how viscerally mad I got when I had to put the discard pile back on the deck,” says Daviau, “I was mad for two reasons. One, these cities are going to be difficult again and again, the whole game. And two, as a designer, ‘why the hell didn’t I think of that!’”

Daviau’s other pick is the dice game, Pandemic: The Cure, “I liked that because when we’re designing, I joke that I’m going to throw like a 20-sided die in, as I’m a big D&D head. And then he goes and makes a game that’s all dice.”

Iberia, The Cure, and Fall of Rome all makes Leacock’s remaining spots jointly, the latter being quipped that a “wargame broke out in the middle of your Eurogame,” from Daviau.

With that then, we say goodbye to the one of the defining series of the last 10 years. While there will certainly be more Pandemic games in the future, this is our last taste of Pandemic Legacy. As a farewell to the series, Season Zero makes a perfect getaway.

We've also taken a look at the expansions available for Pandemic, which you can view by clicking here!