A Cold Wind to Valhalla: The Ashdown Campaign for Viking Steel! 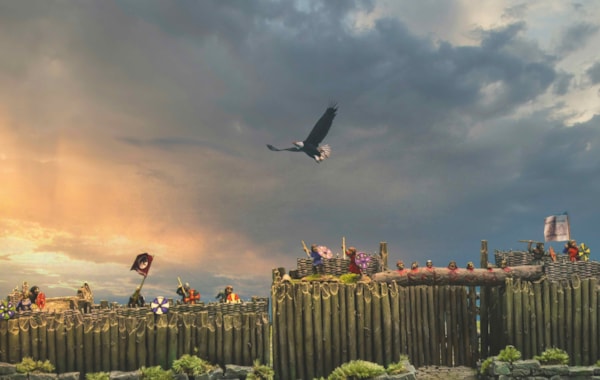 In issue 453 of Miniature Wargames, I wrote an article which explored our new Viking Steel! rule set for the Dark Ages. In this article I will give you a run through of the Ashdown Campaign, and how to recreate the four battles as a wargame. This was an extraordinary campaign for several reasons, it was fought over the new year period so in the heart of winter, and consisted of four actions in the space of just over three weeks.

By 870 the Vikings had established their presence in Anglo Saxon England, conquering the Kingdoms of Northumbria and East Anglia. As the year 870 drew to a close, they moved their attention to Mercia, arriving at Reading on 28th December. Over the next few days, they settled in, and sent out foraging parties to harry the local populace and gather food. One of these was ambushed at Englefield, and roundly defeated. This had a twofold effect: it emboldened the local Levy, making up the bulk of the Saxons, and denied supplies to the Vikings.

The Saxons followed up their victory by marching on Reading. The fortress wall was only partially completed, and the Saxons outnumbered their opponents. Initially things went well for the Saxon levies, but the battle turned when Halfdan, one of the Viking leaders and leading a large raiding force, returned on the flank of the fully committed Saxons routing them. The campaign was still not finished, as four days later the armies clashed at Ashdown, with Alfred taking a major role in the Saxons victory.

The final battle, of any consequence, took place at Basing, when the forces met in a very boggy valley, where the high ground and road were the only easy access points. This was a grinding Viking victory and it brought the campaign to a close. Aethelred died shortly afterwards – possibly of his wounds – and Alfred inherited a kingdom. 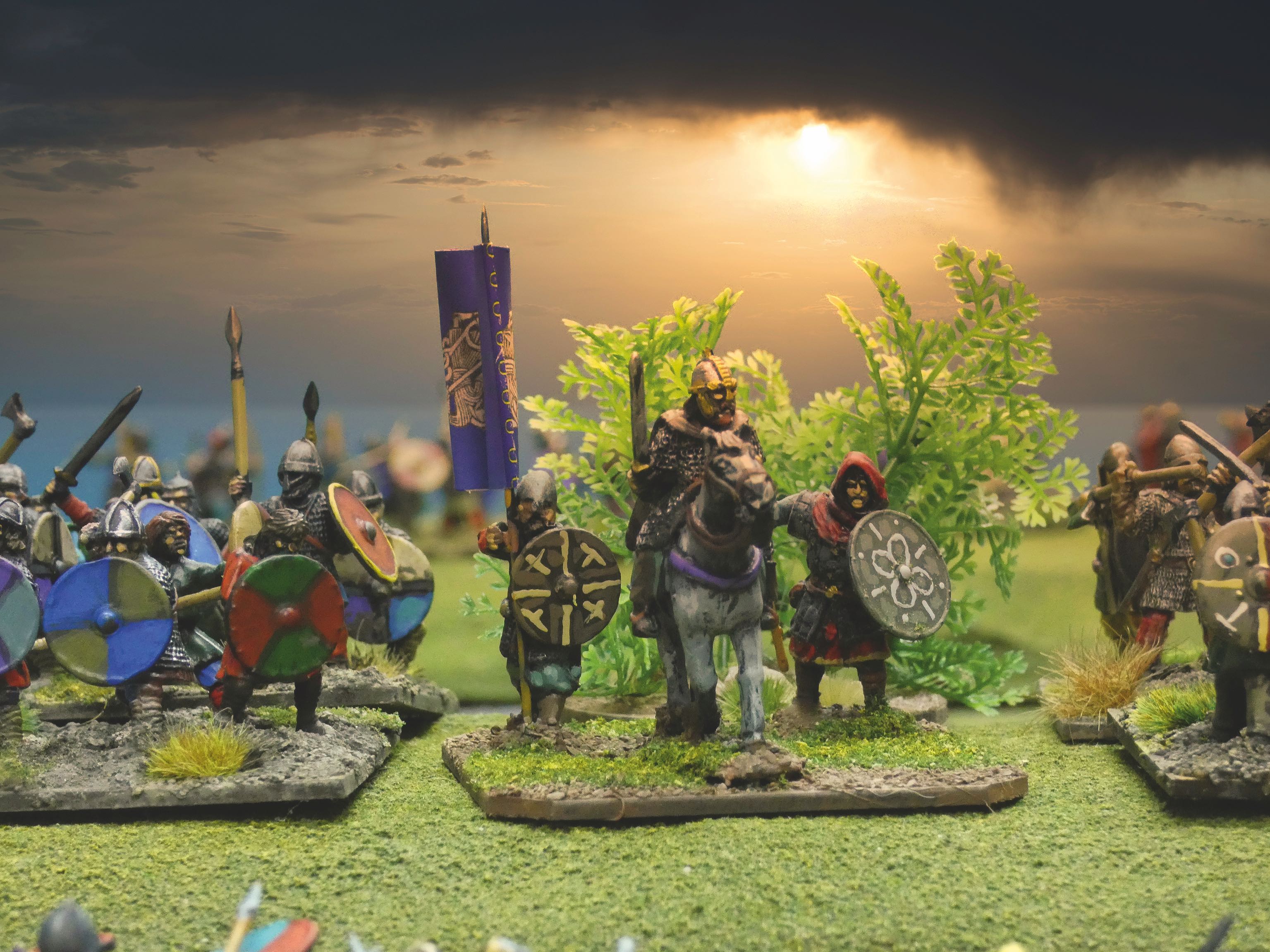 This is a very brief summary of events, and it must be acknowledged that there is very little detail on any of the battles, so a large part of the narrative is conjectural. I will say, however, our re-enactments are very entertaining. We have played each battle twice, often with very different results. One result of the pandemic and the Covid restrictions, is our inability to all meet for our weekly games. To keep the group together – and our morale high – we have resorted to playing twice a week at the Victorian Outpost, playing each battle in our respective sub-groups. This has proved to be very enjoyable, as well as making my life as host and organiser a lot easier, as the table can remain set up for longer between battles.

The sub-groups report back to the others through our Whats-App group and I recommend you and your group set one up, if you haven’t already got one. We find it invaluable.

Before I give the set ups for the various battles, I need to introduce a further variant to the rules (and I refer you back to Issue 453. Ed.): this being the use of the Boars or Pig’s Snout tactic. This was effectively a wedge formation designed to punch through the opposition, and could only be used by trained troops, with the point filled by a champion, Lord of War or high-status leader.

The formation takes one order to form up and counts as a formation change. It is only available to warrior class and higher troops. The leader is placed in front of the unit and generates an extra, special dice. A full-strength unit will therefore roll two special and four ordinary dice in each melee round. They also have a -1 adjustment so long as they are winning the melee; if not their cohesion is being lost and their opponents get the advantage. As the champion/leader is in the thick of the action, the opposing side can replace a normal dice with another special one, if they wish. Boars head can only move once in any turn, no matter how many orders are passed.

THE BATTLE OF ENGLEFIELD 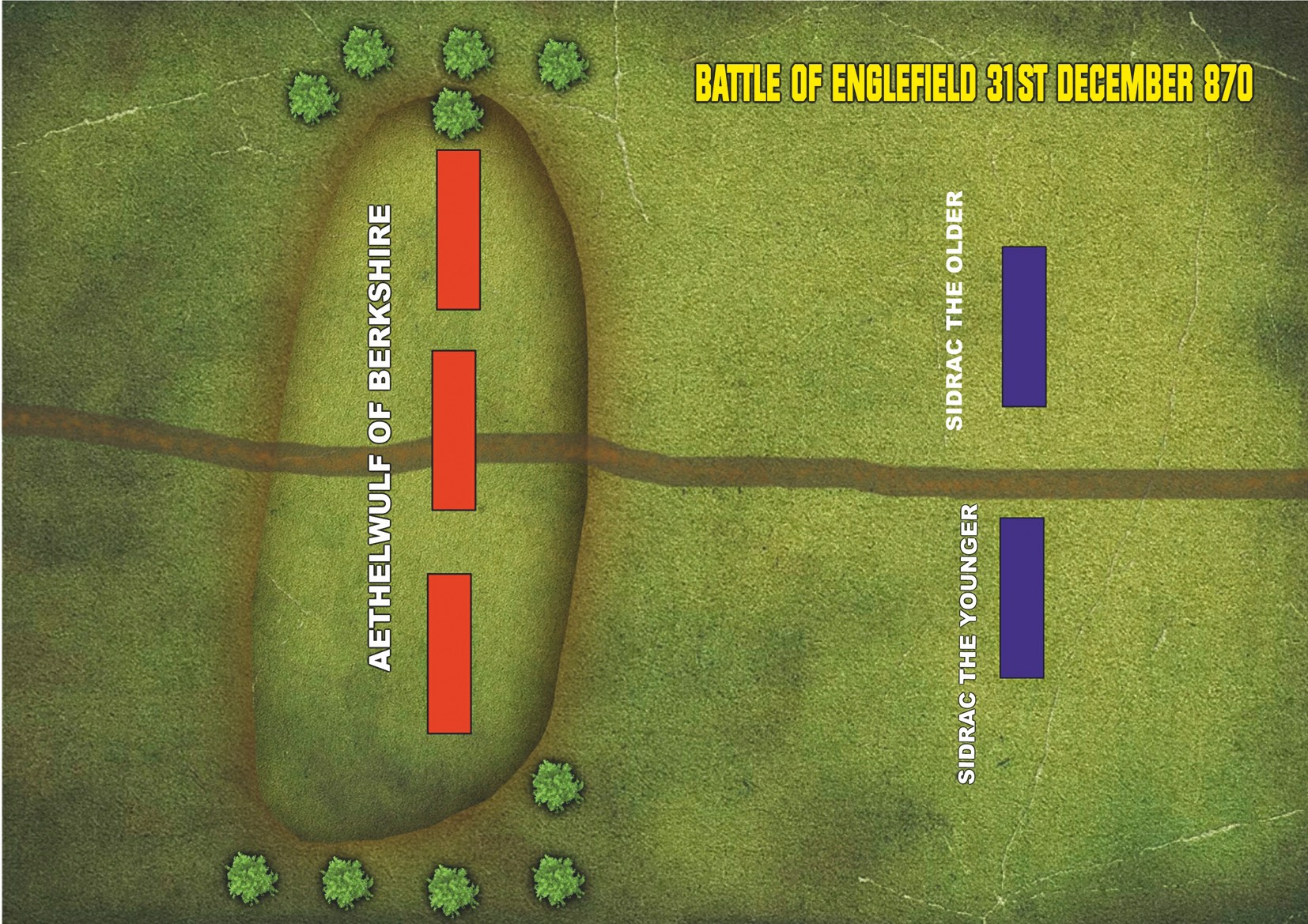 The map shows the very simple nature of the battlefield. A road runs across the centre and climbs a steep hill, which counts as difficult terrain whilst climbing or descending it. Both edges of the hill are covered by impenetrable forest, so it is a good defensive position that cannot be turned. We doubled the number of units compared to the map, to make for a longer game, but the choice is yours. The Vikings have four units as follows, along with two baggage elements such as carts or wagons.

The Viking objective is to cross the table and exit it with at least one unit and one baggage element to help feed the forces at Reading. The Saxon force which has surprised the enemy, has the simple task of stopping any Viking forces or baggage exiting and reaching Reading. Remember this is Saxon land and Saxon goods that are being carried off!

The Saxon ambush force is made up as follows:

We played this on a 6’ by 4’ table, it is a great introduction to the rules and challenging for both sides. The Vikings must make good use of their advantage in quality, particularly Sidrac’s one elite bodyguard unit. They must try not to get flanked, whilst trying to maintain some fatigue points.

The Saxons start in a naturally strong defensive position, but their force is rather fragile and not very disciplined. They must decide whether to throw all their forces in at once or have a defensive second line, for if, and when, the Vikings break through. They must try to wear down their stronger opponents, and not get drawn into long melees where their brittle nature will cost them.

THE BATTLE AT READING

This action was the consequence of the Saxon victory at Englefield, the Saxons sensing another victory charged the Viking defenders who deployed outside the town. It was only partially complete and there was little advantage in letting the Saxons in. More Vikings arrived from behind Reading, marching out of other gates. Purely by chance, once all the Saxons were engaged, a raiding force under Halfdan returned and charged out of a wood into the flank of the now desperate Saxons. This was a major Viking victory. 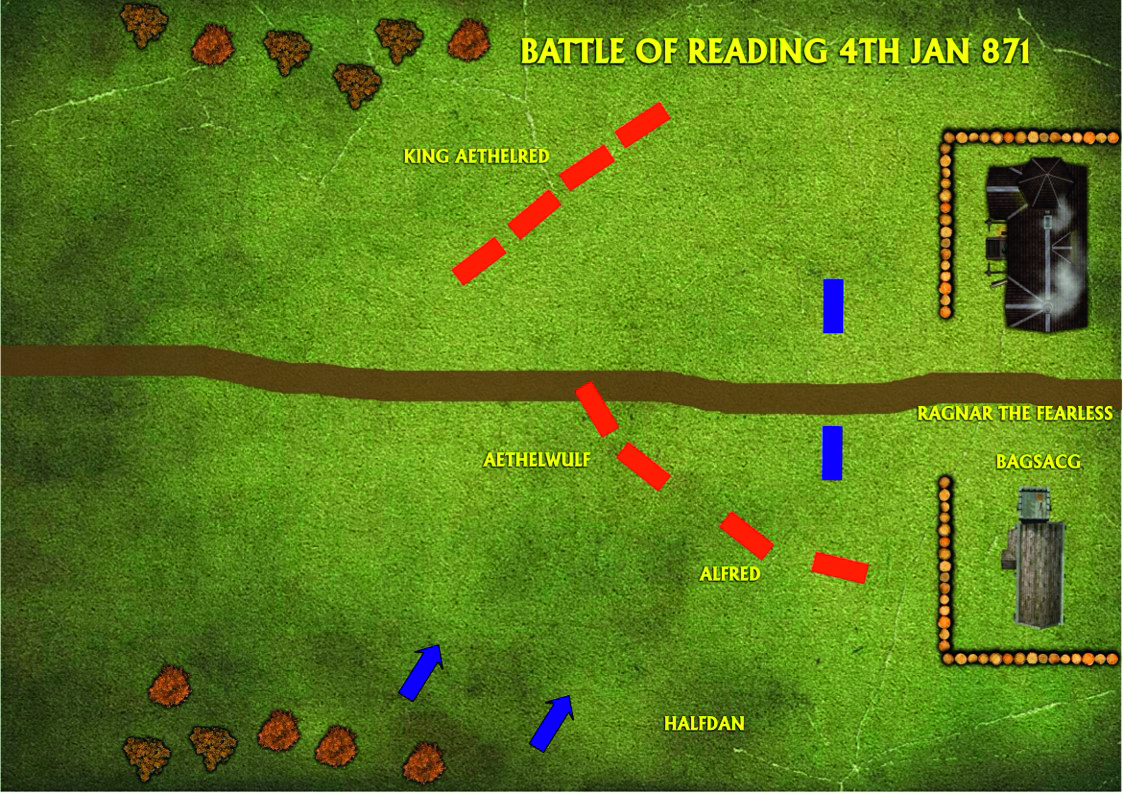 The map shows the Burgh at Reading and the two Viking Warrior units defending it. The remainder of the Viking force arrives dicing once a Viking unit is engaged in melee. They require 6 on a D6 the first turn, 5 or 6 the second and so on. They also dice for arrival point: 1-2 to the left of the town, 3-4 in the town and 5-6 to the right of the town. Once the majority of the Saxon units are engaged or have exchanged missiles, Halfdan’s raiding party can be diced for. They arrive on 5-6 on the first opportunity 3-4-5-6, the second and automatically on the third. Once Halfdan’s force is spotted the Saxons must exit the table on the opposite edge to Reading.

If you are playing this with more than two players it works best if the third player pretends to be the umpire, or a spectator until Halfdan’s force arrives. He then takes command of the flanking force, usually to the consternation of the poor Saxon player, and surprise of the Viking one!

The Reading force is made up of:

Halfdan’s force is made up as follows:

The Saxon force is made up as follows:

THE BATTLE OF ASHDOWN 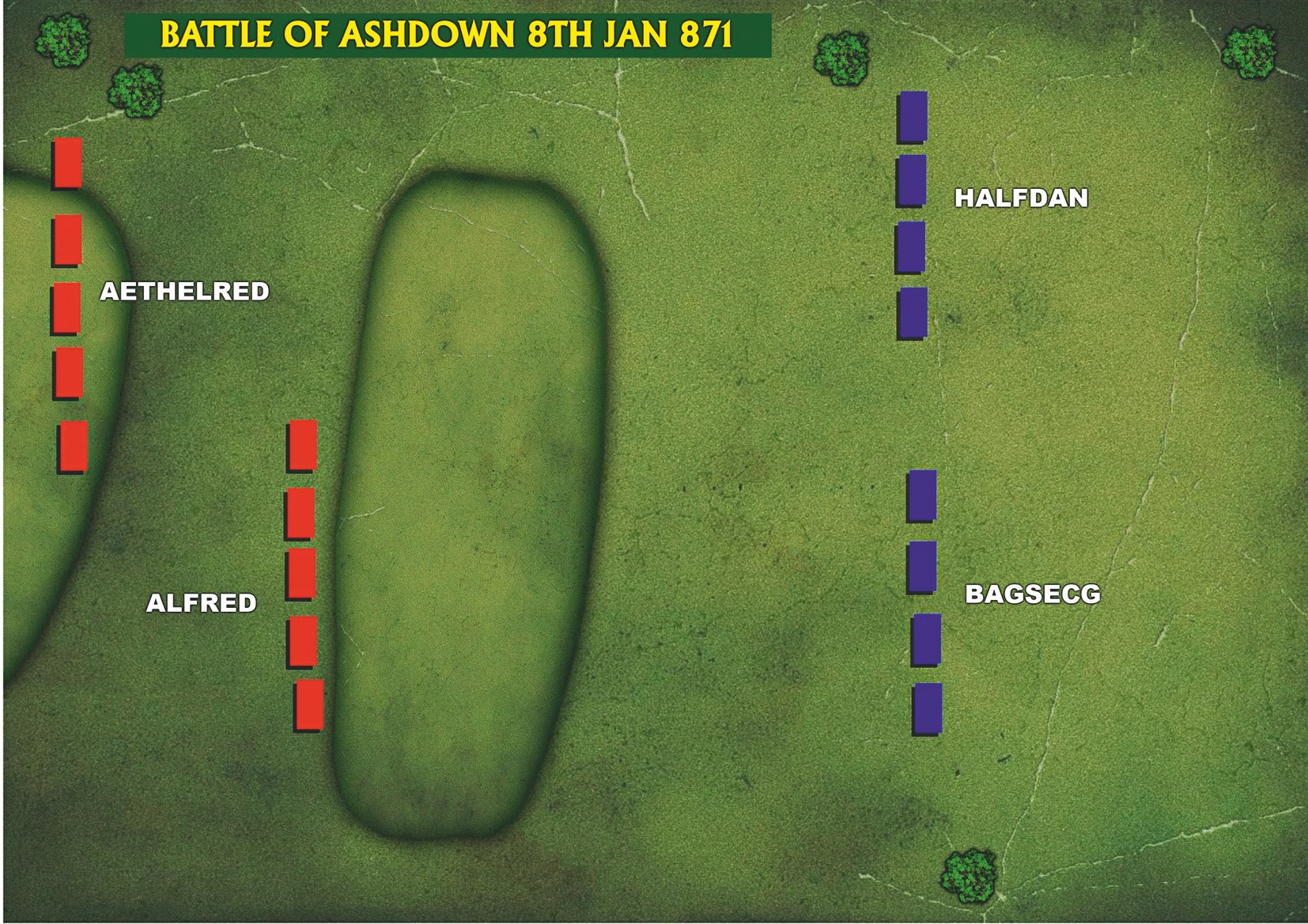 Despite taking a pounding, the Saxon morale rose before both sides shaped up around the hill at Ashdown. Alfred in command of half of the Saxon force advanced behind the hill at Ashdown, while Aethelred and his force stayed back, whilst the king remained at prayer. The Vikings also divided into two forces under Halfdan and Bacsecg and both attacked Alfred. Whether they did not locate the rest of the Saxons, or they wanted to defeat their opponents piecemeal is not known. What is certain is that once Aethelred finished praying, his force attacked the Vikings in the flank and after a long hard battle beat them and they withdrew to Reading.

The Saxon levy were well motivated in this battle so we reduced their rating level by 1. The map shows the set-up of the battlefield and troops. The composition of the forces are as follows:

The Viking force is made up as follows:

This is an easy battle to play it is a purely encounter battle, the only item which needs dealing with is the late arrival of Aethelred. We rolled a D6 to see when that force sets off On a roll of 6 turn 1, on a 5 or 6 turn 2 etc. The winner is the force that holds the battlefield.

THE BATTLE OF BASING 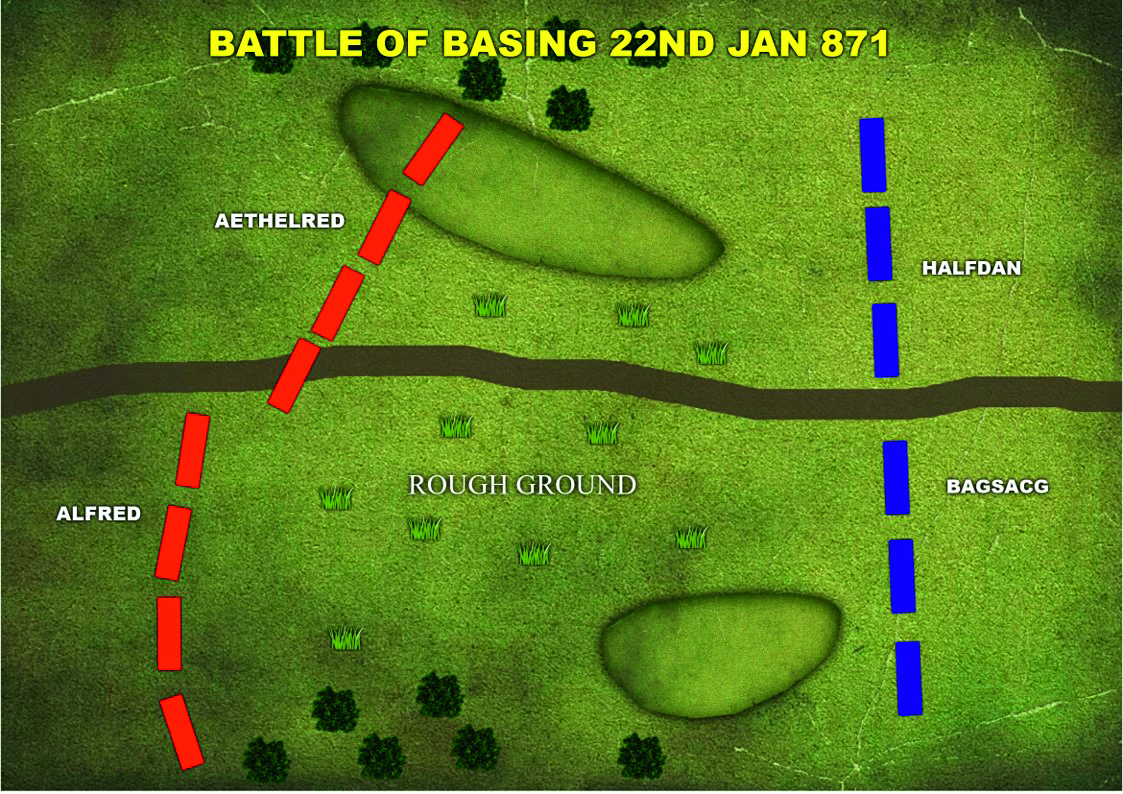 The Vikings received reinforcements via the Thames and went on the offensive attacking – and defeating – the Saxons at Basing. I decided to be inventive with the terrain on this one, creating a valley with a single road and some very rough and boggy ground surrounding it. The hills count as bad terrain, so both sides options are determined by the terrain. The forces are the same as for the battle of Ashdown. If you wish to, you could make the two battles linked. I would suggest that both sides get a chance to replace their losses from the Ashdown battle and fight the Basing battle with the reinforced units. Maybe roll a D6 and a lost figure is replaced on a 5 or 6.

The rough ground in the valley uses the following rule:

For each movement order passed a D6 deduction is made from the adjusted score, and this is then halved. This had the result of most units heading for the road or the high ground in our games.

This is a straightforward encounter battle, with the objective being the destruction of the opposing force. A final action took place at Merton. This was another encounter for which we have no further details. If you want to add this to the linked games, feel free. I would suggest you dice for terrain modules and entry points.

After this battle Aethelred died, possibly from his wounds and Bagsecg also died either at Ashdown or in the following battles.

The lack of information shows why these are the ‘dark ages’, but they do leave a lot of scope for us wargamers! I hope you enjoy refighting these battles as much as our group did.

This article originally appeared in issue 455 of Miniature Wargames. You can pick up your issue of the magazine here or subscribe to make sure you never miss another issue.